Research shows why pulmonary fibrosis drugs that target lung stiffness alone may not work in patients, even if they show promise in a Petri dish 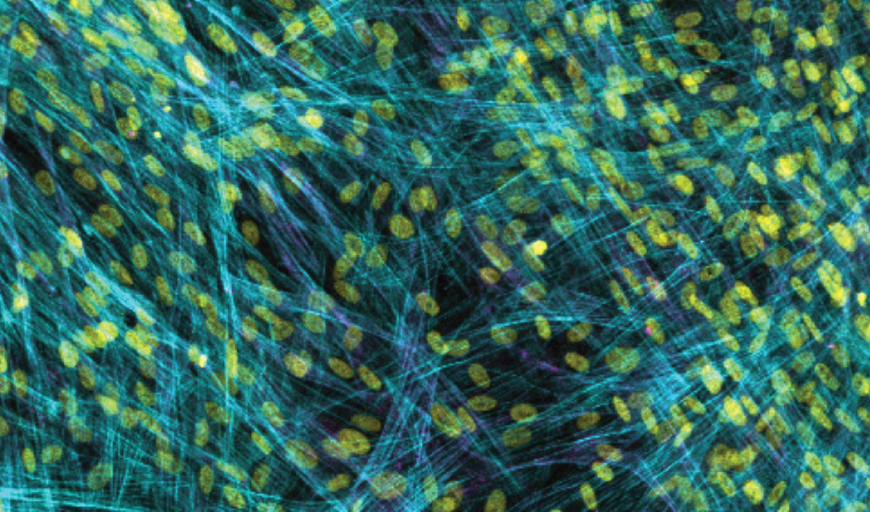 A 3D bioengineered model of lung tissue built by University of Michigan researchers is poking holes in decades worth of flat, Petri dish observations into how the deadly disease pulmonary fibrosis progresses.

The causes of pulmonary fibrosis are not fully understood, but the condition is marked by scar tissue that forms inside the lungs. That scar tissue stiffens the walls of the lungs’ air sacs, called alveoli, or, at advanced stages, can completely fill the alveolar spaces. Both scenarios make breathing difficult and decrease the amount of oxygen entering the bloodstream. Often the condition is irreversible, eventually causing lung failure and death.

Some clinicians are concerned that critically ill COVID-19 patients may develop a form of pulmonary fibrosis after a long stay in the ICU.

Researchers are searching for better treatments. While they’ve managed to find some drugs that relieve symptoms or slow the progression in practice, they haven’t been able to reliably replicate those results in today’s 2D lab models. So they don’t understand how or why those drugs are working, and they can’t always predict which compounds will make a difference. The new research from U-M takes a step in that direction, and it starkly demonstrates how prior approaches have been ineffective.

The team showed that in some 2D models, drugs that are already known to be effective in treatment do not produce test results that show efficacy. Their 3D tissue engineered model of fibrotic lung tissue, however, shows that those drugs work.

Before their tests on drugs, they first performed studies to understand how tissue stiffness drives the appearance of myofibroblasts—cells that correlate with the progression of scarring.

“Even in cells from the same patient, we saw different outcomes,” said Daniel Matera, a doctoral candidate and research team member. “When we introduced stiffness into the 2D testing environment, it activated myofibroblasts, essentially creating scar tissue. When we introduced that same kind of stiffness into our 3D testing environment, it prevented or slowed the activation of myofibroblasts, stopping or slowing the creation of scar tissue.” 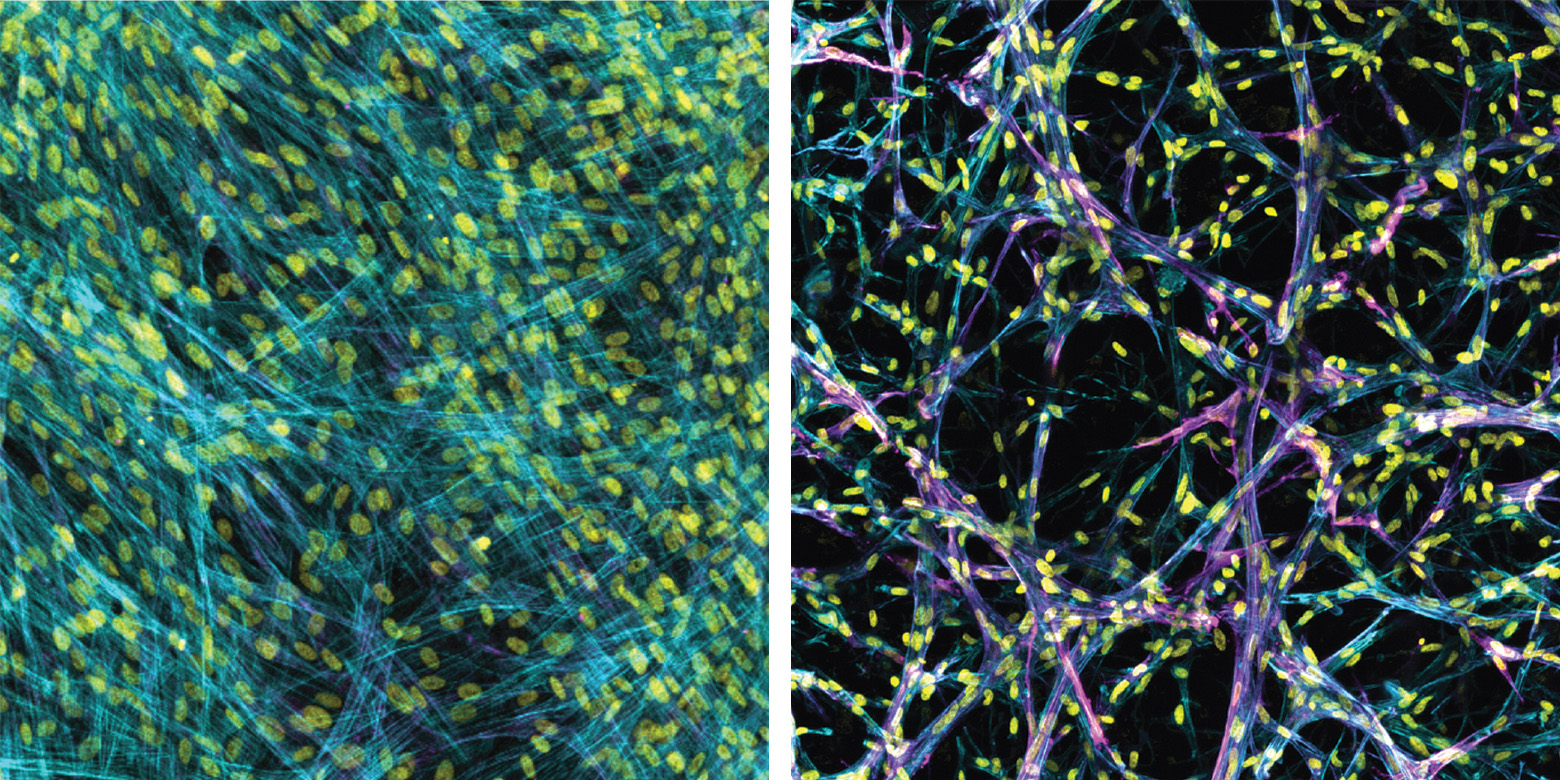 In line with prior work, myofibroblasts fail to accumulate in soft 2D settings (left). In the new 3d model (right) the myofibroblasts (magenta) accumulate, even in soft conditions that mimic a healthy lung. Images are stained for cytoskeleton (blue), cell nuclei (yellow), and a marker for myofibroblast activation (alpha-smooth muscle actin, magenta). Image credit: Baker Lab

With the majority of pulmonary fibrosis research relying on 2D testing, he said, many have believed the high lung stiffness in patients is what should be targeted by treatments. U-M’s research indicates that targeting stiffness alone may not hinder disease progression in patients, even if it works in a Petri dish.

To find effective treatments, researchers first screen libraries of pharmaceutical compounds. Today, they typically do that on cells cultured on flat plastic or hydrogel surfaces, but these settings often do a poor job of recreating what happens in the human body.

Timelapse of lung fibroblasts (blue) migrating and remodeling matrix fibers that mimic lung collagen (magenta) over 24 hours. When fibroblasts are able to remodel their environment, they can turn into disease-promoting myofibroblasts in 3d. Image credit: Baker Lab

Brendon Baker, assistant professor in the U-M Department of Biomedical Engineering, and his team took a tissue engineering approach. They reconstructed 3D lung interstitium, or connective tissue, the home of fibroblasts and location where fibrosis begins. Their goal was to understand how mechanical cues from lung tissue affect fibroblast behavior and disease progression.

“Recreating the 3D fibrous structure of the lung interstitium allowed us to confirm effective drugs that wouldn’t be identified as hits in traditional screening settings,” Baker said.

At the center of the pulmonary fibrosis mystery is the fibroblast, a cell found in the lung interstitium that is crucial to healing but, paradoxically, can also drive disease progression. When activated, after an injury or when disease is present, they become myofibroblasts. Regulated properly, they play an important role in wound healing, but when misregulated, they can drive chronic disease. In the case of pulmonary fibrosis, they cause the stiffening of lung tissue that hampers breathing.

“Our lung tissue model looks and behaves similarly to what we have observed when imaging real lung tissue,” Baker said. “Patient cells within our model can actively stiffen, degrade or remodel their own environment just like they do in disease.”

The study, published in the current issue of Science Advances, is funded, in part, by the National Institutes of Health.