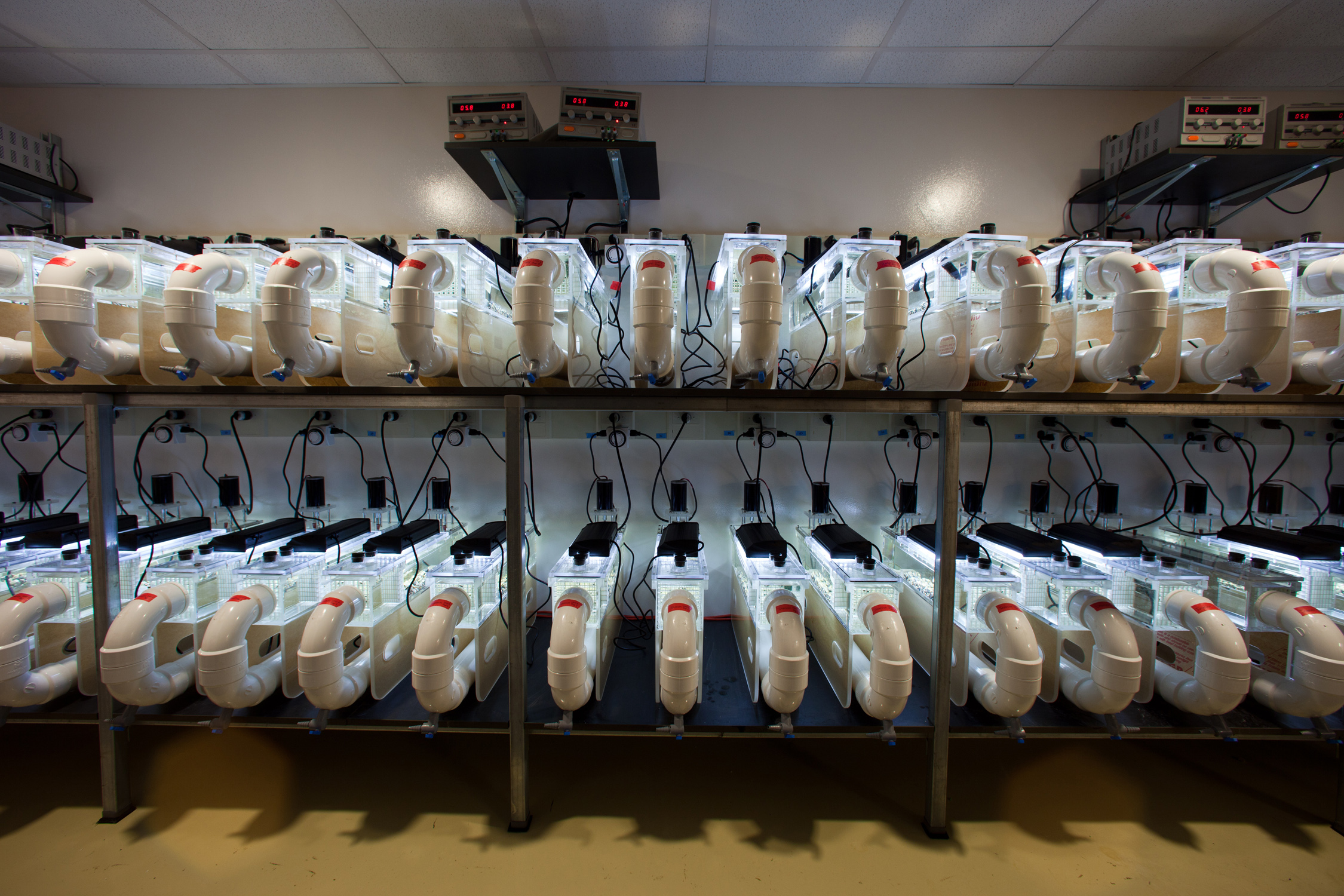 The artificial streams are called flumes, and U-M’s new $1 million “Flume Room” is in the basement of the Dana Building, home to the School of Natural Resources and Environment. The U-M flume lab is the largest facility of its kind in North America, and possibly the world.

“We’re taking little pieces of the Huron River – the water, the rocks, the bacteria, the algae, the insects and other small invertebrates that inhabit the stream – and we’re placing them into these 150 small flumes. We try to mimic all the river conditions we possibly can,” said Bradley Cardinale, an assistant professor at the School of Natural Resources and Environment and principal investigator of the flume project.

Running an experiment 150 times in 150 identical flumes provides what researchers call high replication, which enables them to precisely estimate how different environmental stresses – such as pollution, species invasions and extinctions, climate change and erosion – affect the river’s health. 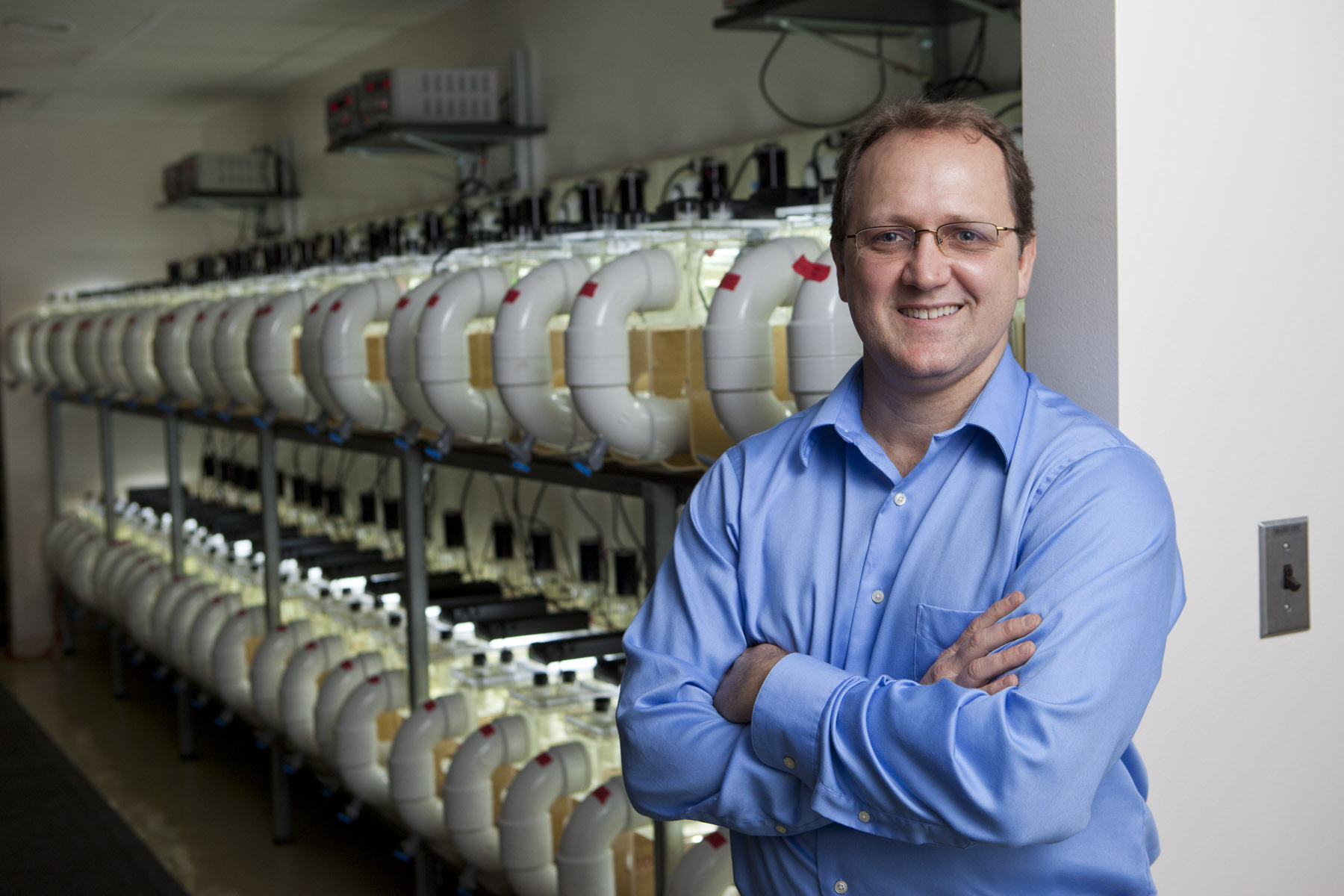 Bradley Cardinale, assistant professor at the School of Natural Resources and Environment. Photo: Austin Thomason, U-M Photo Services“I call it environmental triage,” Cardinale said. “Basically, we’re trying to figure out what forms of environmental change are having the biggest impacts on streams.

Each of the artificial streams in the flume lab is completely enclosed and re-circulating, which makes it possible to examine how each form of environmental stress impacts the production of oxygen, the removal of pollutants from water, and the decomposition and recycling of wastes in a closed system. 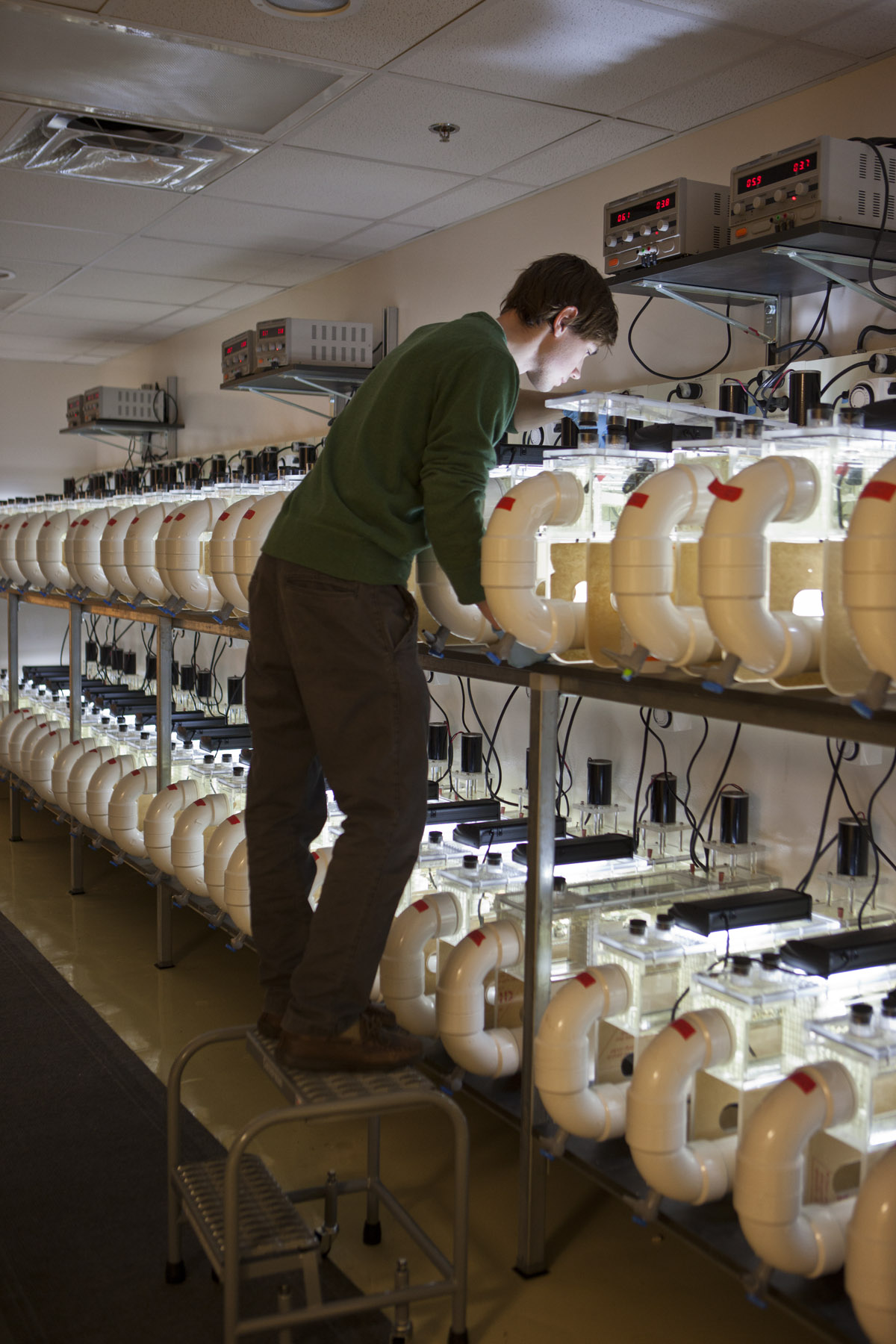 Researchers working in the new U-M “Flume Room.” Photo: Austin Thomason, U-M Photo ServicesThe flumes run around the clock every day and water temperature is maintained at 65 degrees Fahrenheit to simulate fall temperatures in the Huron.

“The sheer number of streams here, and the unique design of these streams, makes this a one-of-a-kind research facility,” said Cardinale, who came to U-M in January 2011. The University of Michigan funded the flume lab project, and construction began in earnest in January.

U-M paid for construction of the lab, which began in earnest in January. Shortly after he arrived in Ann Arbor, Cardinale was awarded a $2 million grant from the U.S. National Science Foundation to study how environmental changes affect water quality throughout North America. The U-M flumes will be one of the primary research tools used in the study, which involves collaborators at two other universities.

The construction work was completed in August. The first experiment began in September and is expected to end this year. A second project will begin at the start of next semester.

The stream channel in each flume is 19.5 inches long and 4.7 inch wide, a clear, gravel-bottomed Plexiglas box that resembles a narrow aquarium. A large C-shaped piece of PVC plastic pipe runs under each stream channel, connecting at each end of the box.

An electric motor drives a propeller inside the pipe that pushes 17 quarts of water through the system at 8.6 inches per second to approximate the Huron River’s flow rate. Each stream channel is fitted on top with an aquarium light to promote growth of the organisms within.

While small, the flumes contain more individual algae and bacteria than there are trees in the Amazon, Cardinale said.