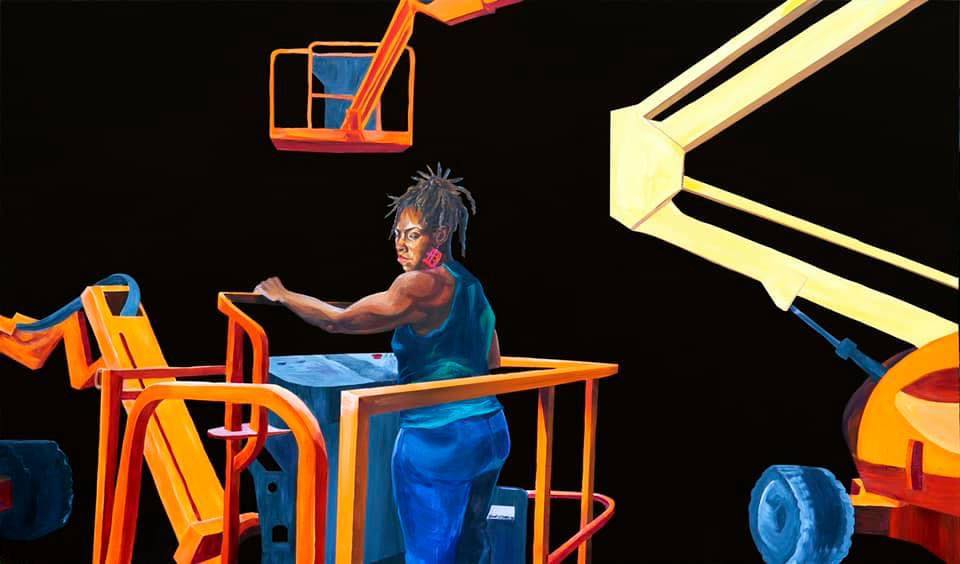 “Articulating Boom Shakalacka” by Sydney James (a self portrait), is part of “Watch Me Work — Portraits of Self,” an exhibition now on view on the exterior of the University of Michigan Institute for the Humanities Gallery. Image credit: Anthony Hughes

“Watch Me Work — Portraits of Self,” a new public art installation by Detroit artist Sydney James at the University of Michigan Institute for the Humanities Gallery, honors and celebrates the labor of Black women.

The installation, which was created as part of a fall artist residency with the institute, includes eight large-scale portraits on canvas depicting Black women at work in various roles, repositioning the narrative of their role in society from “less than or least of” to “deeply valued.”

“James often uses women from her immediate circle as her models, including fellow artists, relatives and friends,” said Amanda Krugliak, curator and director of the Institute for the Humanities Gallery.”
Amanda Krugliak

“James often uses women from her immediate circle as her models, including fellow artists, relatives and friends,” said Amanda Krugliak, curator and director of the Institute for the Humanities Gallery. “Consequently, the paintings feel intimate yet on a grander scale—and honor both the individual and community.” 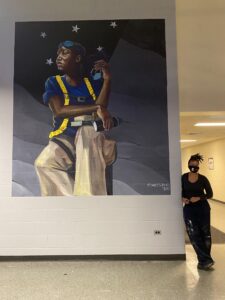 “Sarah the Whatevershechoosestobe-(h)er” by Sydney James (pictured) is a new mural on view in the lobby of the University of Michigan’s Modern Languages Building. It was completed in October 2020. Image credit: Amanda Krugliak

With the gallery closed to the public due to COVID-19, “Watch Me Work” will be completely visible from the street. Artwork will be hung in the Washington and Thayer streets first floor windows of the institute, with two additional works visible through the gallery window on Thayer as part of a public celebration of these meaningful human relationships and connections.

Born and raised in Detroit, James often uses her art as a form of protest. Most recently, she completed “The Malice Green Mural Monument” on the side of the Hamilton-Tucker Gallery on the border of Detroit and Hamtramck. She has also painted murals in New Orleans, Atlanta, Los Angeles, Honolulu and Ghana.

In October, as part of her artist residency, she also completed a mural titled “Sarah the Whatevershechoosestobe-(h)er,” on the first floor of the the U-M Modern Languages Building. Her work, which depicts a Black woman holding a face mask, a spray paint can and some books, including a copy of Virginia Hamilton’s “Zeely,” was inspired by Norman Rockwell’s lesser known painting of Rosie the Riveter.

James’ mural is located opposite a recent Institute for the Humanities commission by fellow Detroit-based artist Tylonn Sawyer, who created a mural to honor Samuel Watson, the first African American student admitted to U-M.

“I am really proud of these two murals that are now in a prominent place on campus where many students convene and pass through,” Krugliak said. “There’s really nothing like them anywhere else on campus.” 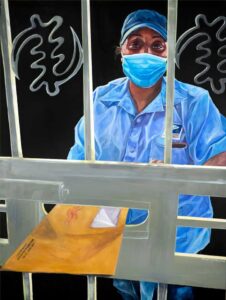 “‘Watch Me Work’ is a celebration of Black women who get it done,” James wrote in her artist’s statement. “From the event planning Zoom mommy to the USPS mail lady, we work. The world watches and we work. The world turns away, we work. Even those of us who sit around all day and manage to make it to the next day safely, it took work.”

James’ virtual opening on Nov. 12 will be hosted on YouTube and includes a film premiere, introductions by Krugliak and a conversation between James and Detroit writer Scheherazade Washington Parrish about James’ mural on Detroit’s Chroma building. Titled “The Girl with the D Earring,” the mural is also the subject of the film that will screen during the event.

As part of her artist residency, James will also lead a student workshop on Art as Business.

“Watch Me Work — Portraits of Self” is made possible by a grant from The Andrew W. Mellon Foundation to further the Institute for the Humanities Gallery’s longtime mission in support of art as social practice.