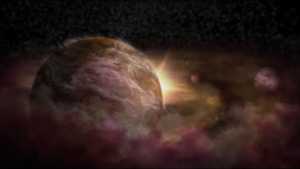 Catching young planets in the act of formation is important for understanding how planets form and how they build their atmospheres. U-M astronomer Richard Teague’s new method involves imaging very small changes in the speed of carbon monoxide gas around star HD 163296, about 330 light years from Earth.

By observing these changes in speed of the gas, Teague and his fellow researchers were able to infer the presence of two Jupiter-sized protoplanets orbiting the star.

“We still don’t truly understand how planets form, so catching them at this earliest stage and being able to see what the actual mechanisms are that produce these giant planets is really going to help,” Teague said. “And, if we want to know where planetary atmospheres come from, and what sorts of materials exist in them, we need to know when and where these planets form in the disk.”

More than a decade ago, astronomers discovered the first planets around other stars by zeroing in on a star and observing whether it “wobbles,” as it is affected by the gravitational pull of an orbiting planet. This technique relies on the Doppler effect on light that stretches the light wave as the star moves away from us in its wobble, and tightens the wave as it moves toward us. The strength of the motion reveals the presence of a hidden planet. 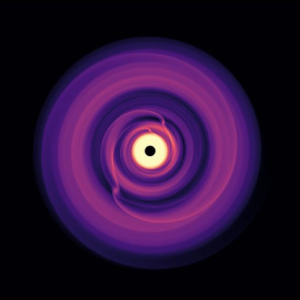 Three planets form spirals in the gas around the sun in the protoplanetary disc.

Gas giants are born out of a disk filled with hydrogen gas, trace compounds such as carbon monoxide and tiny particulate matter called dust, which is smaller than a single grain of sand. While the young star is still surrounded by a gaseous disk in which the forming planets are embedded, these methods cannot be used. Also, these young stars are still forming and have numerous spots on their surfaces, which can hide the presence of the wobble.

Instead, astronomers have typically detected these planets by observing rings carved out from the gas and dust of the protoplanetary disk. This allows researchers to rely on the interaction of the planet with its disk rather than the planet with its star. Then, they model what sort of planetary mass you would need to carve out those rings, says Teague, a postdoctoral researcher in the U-M Department of Astronomy.

“The problem with this method is there are lots of uncertainties, relating to what we can observe to how much material is missing,” Teague said. “So when we observe the dust, we then have to re-scale how much gas we think there should be instead. This has many uncertainties which lead to a very large uncertainty on the calculated mass of the planet.”

Teague began investigating what he could learn by how the forming planets affect the gas through which they’re passing, using the principle of the Doppler effect. When a planet moves through the disk, the planet disturbs gas. The planet causes the gas to rotate around the star at a slightly different speed than you would expect, resulting in rings of gas moving slightly faster and slightly slower.

Measuring those different local velocities gives the researchers a very precise measurement of the planet displacing the gas, says co-author Edwin Bergin, chair of the U-M Department of Astronomy. Teague’s method is so precise that he can detect perturbations in the gas on a scale of a few meters per second at a distance of 330 light years. 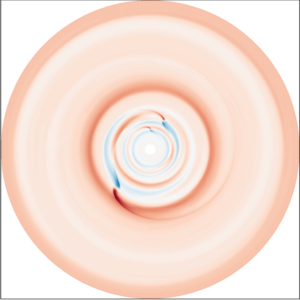 The red and blue swirls show the speed of the gas in the protoplanetary disc relative to its “normal” rotation pattern. The blue represents slower speeds, and the red represents faster speeds.

The instrument that aided developing this method is the Atacama Large Millimeter Array located in the Atacama Desert in Chile.

“Now, with ALMA, we can get AU-scale images. What that means is that it brings the planet-forming regions into view, and even with more distant regions, you get better ability to discern everything,” Bergin said. “It’s a new era.”

AUs, or astronomical units, is a unit of measurement the distance between the Earth and our sun. Previously, images taken by instruments spanned about 30 AUs.

“This method will provide essential evidence to help interpret the high-resolution dust images coming from ALMA,” said Jaehan Bae, a co-author and researcher at the Carnegie Institution for Science in Washington, D.C. “Although dust plays an important role in planet formation and provides us invaluable information, it is the gas that accounts for 99 percent of protoplanetary disks’ mass. It is therefore crucial to study kinematics of gas to better understand what is happening in the disks we observe.”

Teague’s and Bergin’s study was published in Astrophysical Journal Letters. Co-authors include Tilman Birnstiel at Ludwig-Maximilians-Universität München and Daniel Foreman-Mackey at the Flatiron Institute in New York.