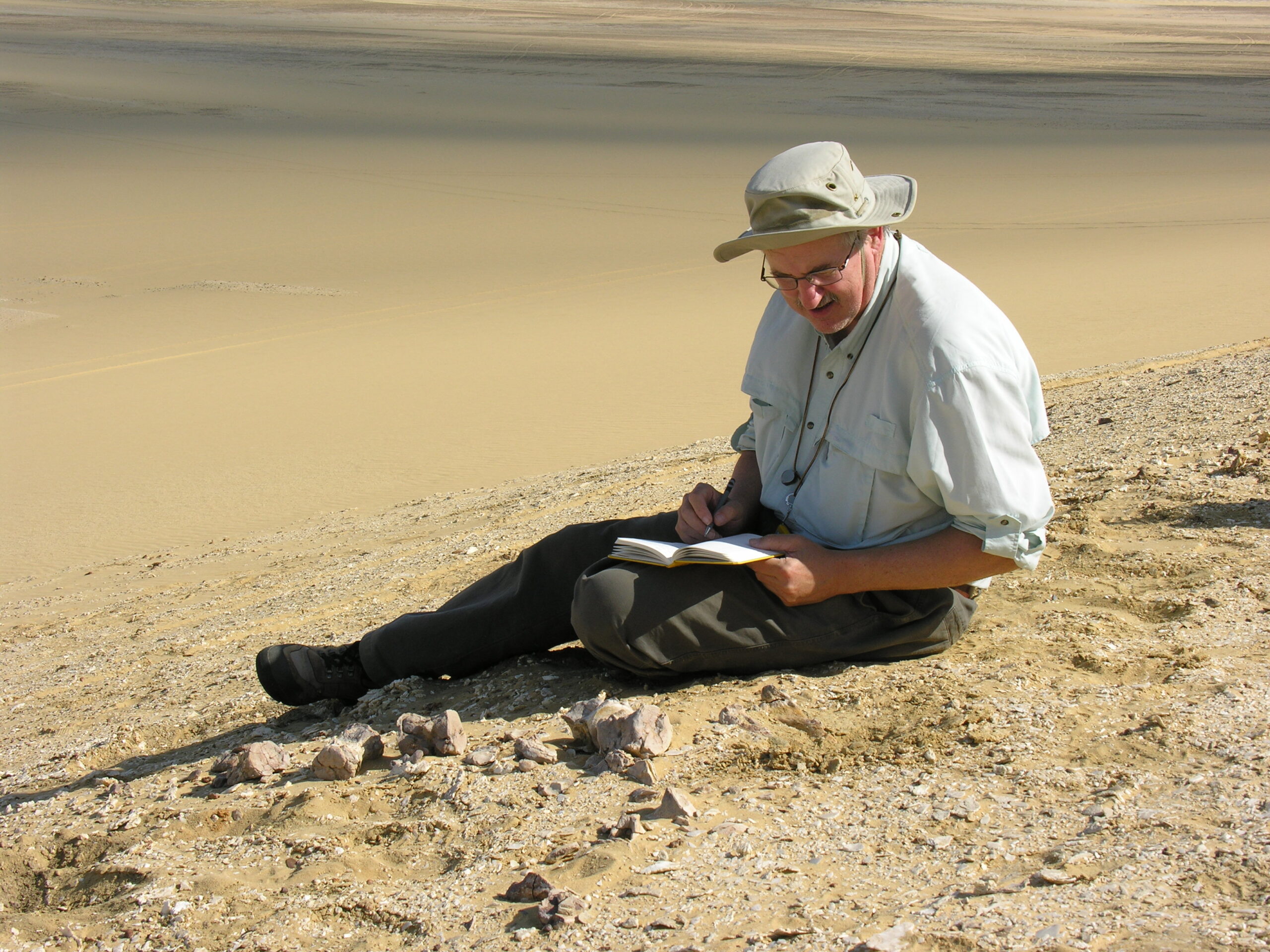 U-M paleontologist Philip Gingerich recording information at the Aegicetus site in 2007 before the excavation started. The site is within the Wadi Al Hitan World Heritage Site in the Western Desert of Egypt. Image courtesy: Philip Gingerich

ANN ARBOR—A newly described fossil whale represents a new species and an important step in the evolution of whale locomotion, according to a University of Michigan paleontologist and his colleagues.

The fossilized remains of Aegicetus gehennae were recovered in the Egyptian desert in 2007 and were dated to around 35 million years ago. The creature appears to have been well-adapted for swimming through undulation of the mid-body and tail, somewhat as crocodiles swim today, according to U-M’s Philip Gingerich.

The discovery is detailed in a paper published online Dec. 11 in the journal PLOS ONE.

The fossil record of whale evolution tracks the transition from land-dwelling ancestors to ocean-dwelling cetaceans. Protocetids are a group of early, semi-aquatic whales known from the middle of the Eocene, a geological epoch that began 56 million years ago and ended 33.9 million years ago. Protocetid remains have been found in Africa, Asia and the Americas.

While modern whales are fully aquatic and use their tails to propel themselves through the water, most protocetids are thought to have been semi-aquatic and swam mainly with their limbs.

In their PLOS ONE paper, Gingerich and his colleagues describe a new genus and species, Aegicetus gehennae, the first late-Eocene protocetid. Its body shape is similar to that of other ancient whales of its time, such as the famous Basilosaurus.

“This newly discovered fossil whale, Aegicetus, was intermediate in time and form and was transitional functionally in having the larger and more powerful vertebral column of a tail-powered swimmer,” said Gingerich, who is also a professor emeritus of ecology and evolutionary biology and of anthropology.

The fossilized bones were discovered in the Wadi Al Hitan World Heritage Site in the Western Desert of Egypt. Aegicetus is the youngest-known protocetid and is known from one exceptionally complete skeleton—roughly two-thirds of the individual’s bones were recovered—and a partial second specimen, making it among the best-preserved ancient whales.

Cervical and thoracic vertebrae of Aegicetus. Compared with earlier whales, Aegicetus has a more elongated body and tail and smaller back legs, and it lacks a firm connection between the hind legs and the spinal column. These adaptations indicate an animal that was more fully aquatic and less of a foot-powered swimmer than its ancestors. Image credit: Gingerich et al in PLOS ONE.

The mostly complete specimen is believed to have been a male. It would have weighed nearly 2,000 pounds in life and would have been about 12 feet long.

Compared with earlier whales, Aegicetus has a more elongated body and tail and smaller back legs, and it lacks a firm connection between the hind legs and the spinal column. These adaptations indicate an animal that was more fully aquatic and less of a foot-powered swimmer than its ancestors.

The original fossils have been held at the U-M Museum of Paleontology for study but will soon be returned to the Egyptian Geological Museum in Cairo. Molds and casts of nearly all of the specimens will remain in Ann Arbor.

In addition to Gingerich, the authors of the PLOS ONE paper are Mohammed Sameh M. Antar of the Egyptian Environmental Affairs Agency and Iyad S. Zalmout of the Saudi Geological Survey.

Research in Egypt was sponsored by the Egyptian Geological Museum, the Egyptian Environmental Affairs Agency, the Egyptian Mineral Resources Authority, the University of Michigan Museum of Paleontology, The U.S. National Science Foundation, and the National Geographic Society.

Specimens described in the paper were collected and studied following protocols outlined in a three-way memorandum of understanding between the Egyptian Geological Survey and Mining Authority, the Egyptian Environmental Affairs Agency, and the University of Michigan.

Three-dimensional photogrammetric models of all the Aegicetus vertebrae and some of the limb bones are available for viewing online at the U-M Museum of Paleontology’s UMORF imagery archive: https://umorf.ummp.lsa.umich.edu/wp/search/. Type “Aegicetus” in the search box.

Some of the material in this press release was provided by PLOS ONE.