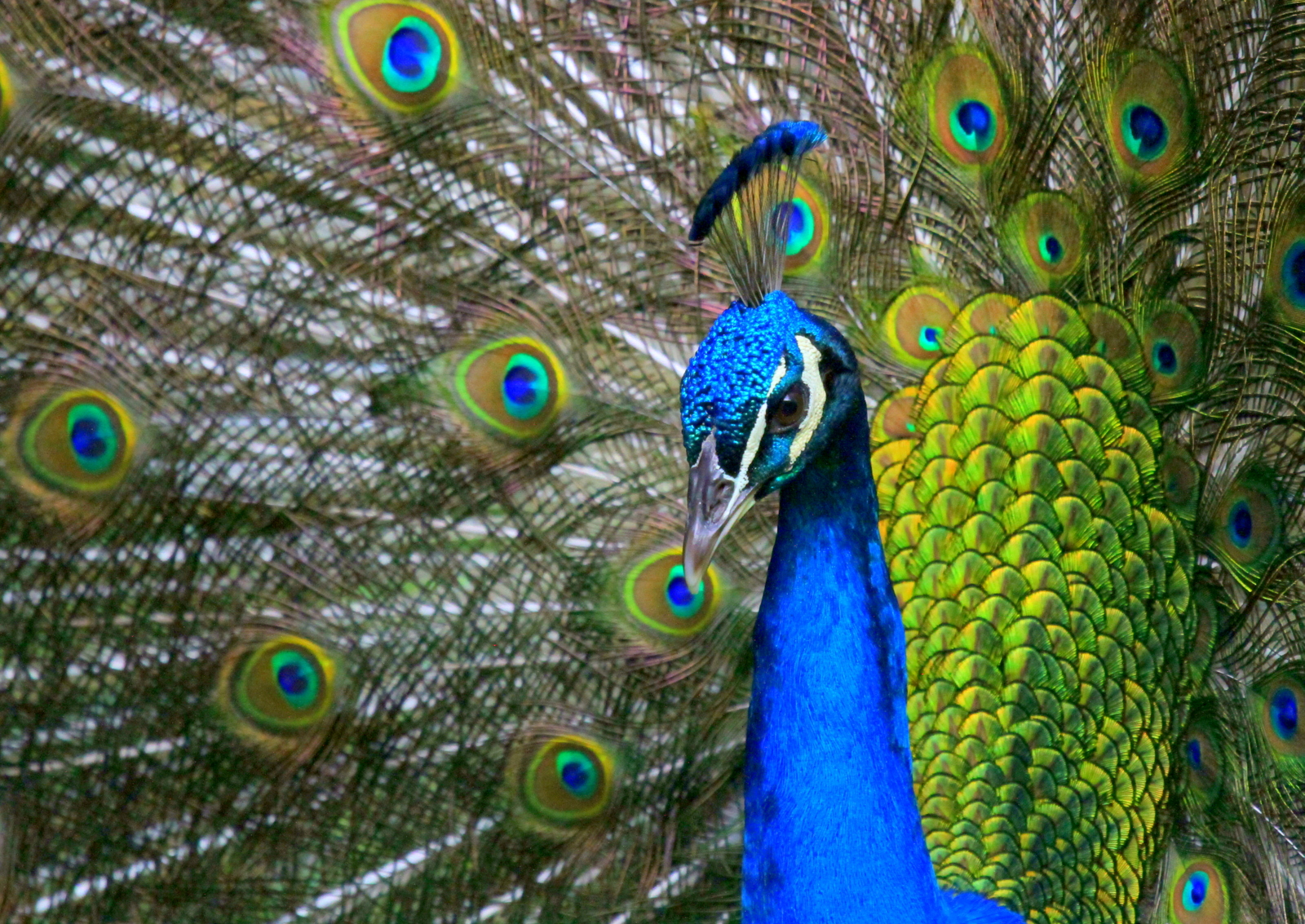 In a peacock’s iridescent tail, precisely arranged hairline grooves reflect light of certain wavelengths, resulting in brilliant color that looks different depending on the movement of the animal or the observer. Imitating this system – minus the rainbow effect – has been a leading approach to developing advanced color reflective displays. University of Michigan researchers have taken a step toward that goal. Image credit: sxc.hu user doc_ANN ARBOR—Iridescence, or sheen that shifts color depending on your viewing angle, is pretty in peacock feathers. But it’s been a nuisance for engineers trying to mimic the birds’ unique color mechanism to make high-resolution, reflective, color display screens.

Now, researchers at the University of Michigan have found a way to lock in so-called structural color, which is made with texture rather than chemicals. A paper on the work is published online in the current edition of the Nature journal Scientific Reports.

In a peacock’s mother-of-pearl tail, precisely arranged hairline grooves reflect light of certain wavelengths. That’s why the resulting colors appear different depending on the movement of the animal or the observer. Imitating this system—minus the rainbow effect—has been a leading approach to developing next-generation reflective displays.

The new U-M research could lead to advanced color e-books and electronic paper, as well as other color reflective screens that don’t need their own light to be readable. Reflective displays consume much less power than their backlit cousins in laptops, tablet computers, smartphones and TVs. The technology could also enable leaps in data storage and cryptography. Documents could be marked invisibly to prevent counterfeiting.

Led by Jay Guo, professor of electrical engineering and computer science, the researchers harnessed the ability of light to funnel into nanoscale metallic grooves and get trapped inside. With this approach, they found the reflected hues stay true regardless of the viewer’s angle.

University of Michigan researchers created the color in these tiny Olympic rings using precisely-sized nanoscale slits in a glass plate coated with silver. Each ring is about 20 microns, smaller than the width of a human hair. They can produce different colors with different widths of the slits. Yellow is produced with slits that are each 90 nanometers wide. The technique takes advantage of a phenomenon called light funneling that can catch and trap particular wavelengths of light, and it could lead to reflective display screens with colors that stay true regardless of the viewer’s angle. Image credit: Jay Guo, College of Engineering“That’s the magic part of the work,” Guo said. “Light is funneled into the nanocavity, whose width is much, much smaller than the wavelength of the light. And that’s how we can achieve color with resolution beyond the diffraction limit. Also counterintuitive is that longer wavelength light gets trapped in narrower grooves.”

The diffraction limit was long thought to be the smallest point you could focus a beam of light to. Others have broken the limit as well, but the U-M team did so with a simpler technique that also produces stable and relatively easy-to-make color, Guo said.

“Each individual groove—much smaller than the light wavelength—is sufficient to do this function. In a sense, only the green light can fit into the nanogroove of a certain size,” Guo said.

“With this reflective color, you could view the display in sunlight. It’s very similar to color print,” Guo said. 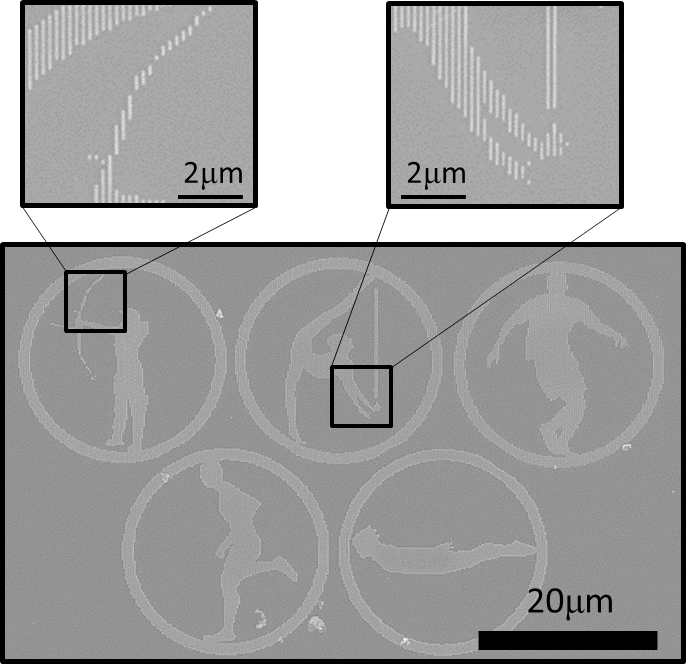 Detail images of the Olympic rings, as viewed through a scanning electron microscope. The magenta color in the bow is produced with several short lines, as small as 100 nanometers long and 60 nanometers wide, demonstrating ultra-high color resolution. The purple color in the gymnast’s rope is produced by just two nanoscale grooves. Image credit: Jay Guo, College of EngineeringTo make color on white paper, (which is also a reflective surface), printers arrange pixels of cyan, magenta and yellow in such a way that they appear to our eyes as the colors of the spectrum. A display that utilized Guo’s approach would work in a similar way.

To demonstrate their device, the researchers etched nanoscale grooves in a plate of glass with the technique commonly used to make integrated circuits, or computer chips. Then they coated the grooved glass plate with a thin layer of silver. When light—which is a combination of electric and magnetic field components—hits the grooved surface, its electric component creates what’s called a polarization charge at the metal slit surface, boosting the local electric field near the slit. That electric field pulls a particular wavelength of light in.

Right now, the new device can make static pictures, and the researchers hope to develop a moving picture version in the near future.

The research is funded by the Air Force Office of Scientific Research and the National Science Foundation. The paper is titled “Angle-Insensitive Structural Colours based on Metallic Nanocavities and Coloured Pixels beyond the Diffraction Limit.”