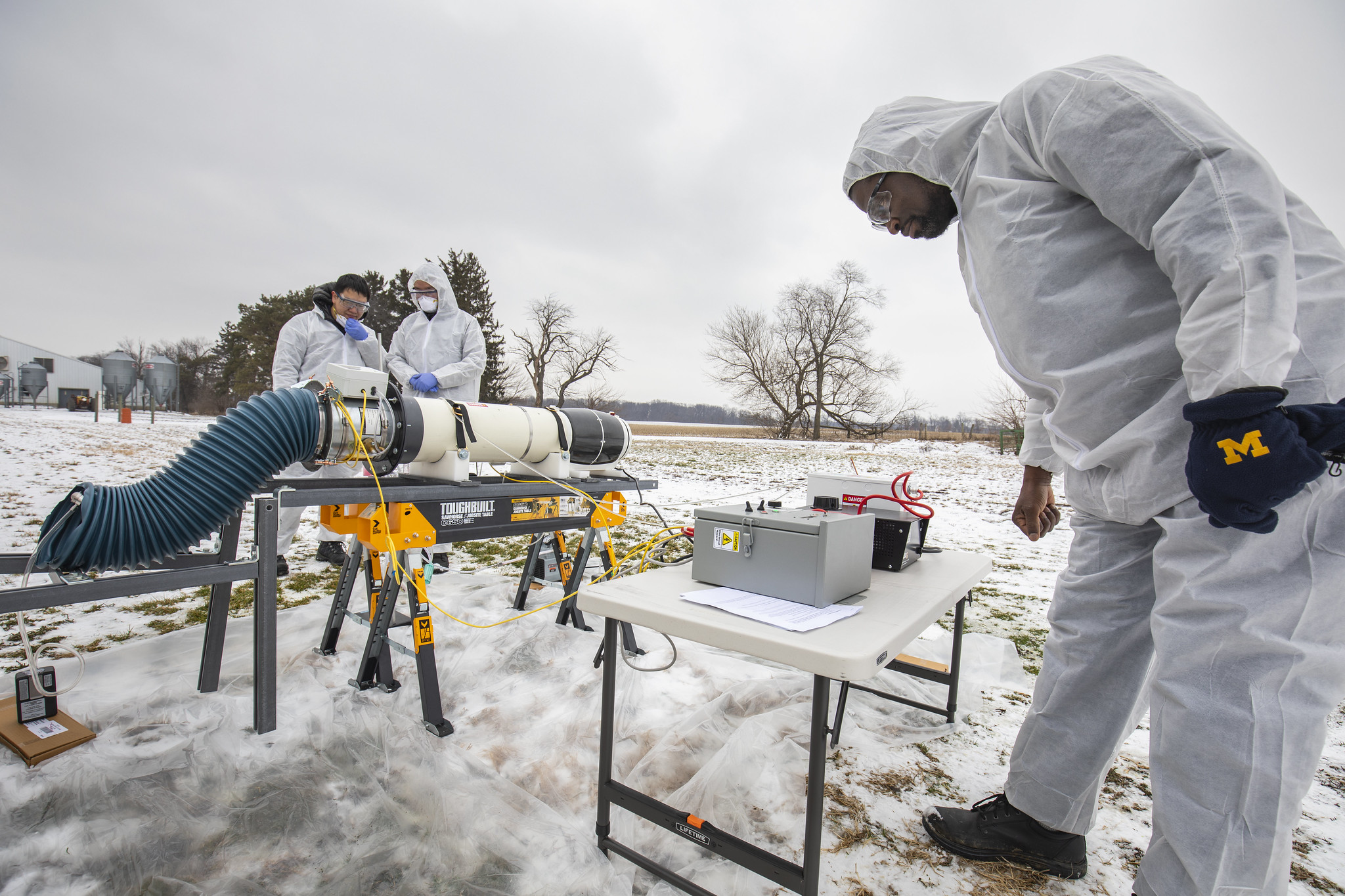 ANN ARBOR—One of the most costly diseases facing the pork industry is caused by a virus that new research shows can be rendered harmless in a fraction of a second by a cold plasma reactor developed at the University of Michigan.

The research is the first demonstration of nonthermal plasma used to inactivate an airborne virus known to cause disease in animals.

In lab testing, airflow containing Porcine Reproductive and Respiratory Syndrome virus (PRRSv) passed through the reactor where it was exposed to charged, highly reactive fragments of air molecules. Tests showed that 95% of the viruses were inactivated or removed during the process.

And that number is likely to improve with modifications to the reactor itself. Each year, PRRSv costs U.S. pork producers nearly $650 million in losses.

In 2017, Herek Clack, a U-M associate professor of civil and environmental engineering, led a team that developed the nonthermal plasma reactor and demonstrated its performance on PRRSv virus, achieving at least 95% inactivation and removal of the virus particles. Results were published this week in the Journal of Hazardous Materials, but first appeared in 2017 on the website of the National Pork Board, which funded the study.

Last year, Clack and his team challenged the nonthermal plasma reactor with a test virus, one harmless to humans. Those results showed 99.9% of the test viruses were inactivated or removed from the air stream.

Nations around the globe are struggling to contain the novel coronavirus dubbed COVID-19. This research represents a step toward next-generation collective protection technologies that can sterilize air supplied to inhabited enclosed environments like pig farms or public transportation, such as commercial airline and cruise ship cabins. Clack envisions the technology as an eventual replacement for the surgical mask. It could also provide complementary protection during the long development cycle required for vaccines.

“This latest research showing comparable performance for two different types of viruses demonstrates that, unlike vaccines, the protective effect of nonthermal plasmas is not dependent on viral strain,” Clack said. “This would mean a broader basis for protection that doesn’t involve the months or years that are needed to develop specific vaccines for each novel or emerging viral disease.”

To gauge the effectiveness of nonthermal plasmas, researchers pumped PRRSv particles into flowing air as it enters a reactor. Inside, borosilicate glass beads are packed into a cylindrical shape, or bed. The viruses flow with the air through the spaces between the beads, and that’s where they’re inactivated.

“In those void spaces, as the applied voltage increases the plasma is produced until sparks begin to initiate,” Clack said. “By passing through the packed bed, pathogens, such as viruses and bacteria in the air stream, are attacked by unstable molecular fragments called radicals. Afterwards, the virus has diminished ability to infect cells.”

During testing, researchers tracked the amount of viral genome present in the air at different stages during the trip through the reactor. In this way, Clack and his team were able to determine how much of the air sterilizing effect was due to inactivation. With PRRSv, up to 95% of sterilization was due to inactivation, and with the test virus, that number was more than 99%.

The approach—combining filtration and inactivation of airborne pathogens—could provide a more efficient way of sterilizing air than either approach, filtration or inactivation, alone. Traditional surgical masks operate using only filtration for protection.

Ultraviolet radiation provides no filtration effect and can’t sterilize as quickly, as thoroughly or as compactly as nonthermal plasma.

“Airborne transmitted diseases represent one of the biggest threats to people and animals,” said Montserrate Torremorrell, a co-author and associate professor of veterinary medicine at the University of Minnesota. “A technology like this nonthermal plasma reactor is a breakthrough that will help keep both healthy.”