By zeroing in on different high-latitude regions around the globe, researchers reveal what global averages mask. 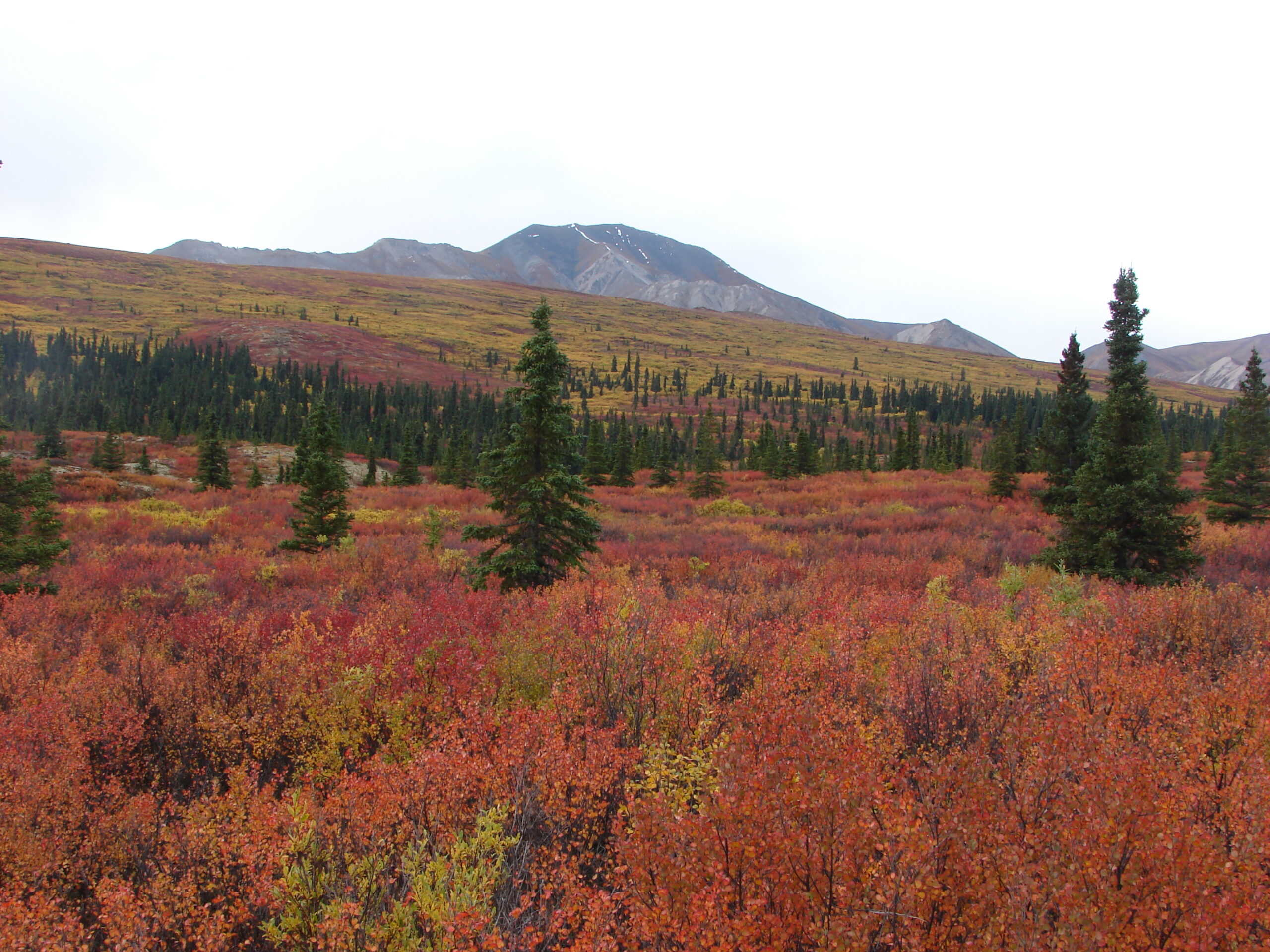 New research shows that some high-latitude North American forests, like the Alaskan forest shown here, are beginning to show increased browning, suggesting that they may not continue to absorb more carbon as temperatures continue to rise. Image credit: Brendan Rogers of Woodwell Climate Research Center

Trees are one of humans’ biggest allies in the fight against climate change, soaking up around 30% of the carbon we pump into the atmosphere by burning fossil fuel.

And over the past several decades, it has appeared that cold-climate forests at high latitudes have become even more effective carbon sinks as rising temperatures and higher CO2 levels have made them more productive.

But a new study led by University of Michigan researchers gives a clearer picture of what’s happening in different regions, and it has cast additional uncertainty on whether those ecosystems will continue to absorb carbon as they become hotter and drier in the decades ahead.

Published in PNAS and involving experts from around the globe, the study shows that the amount of carbon Siberian forests contribute to the planet’s seasonal carbon flux has increased much more than that of other forests at similar latitudes. Since the early 1980s, the seasonal carbon uptake in Siberian forests has increased four times more than that of North American boreal forests like those in Alaska and western Canada, for example.

The study is the first to quantify how carbon emitted from specific surface regions during the annual carbon flux affects the seasonal cycle of CO2 in the atmosphere: The planet essentially “breathes in” carbon during the spring and summer when trees and plants grow leaves and photosynthesize. It exhales in winter when vegetation goes dormant.
Knowing this seasonal flux gives researchers a picture of how productive different forest regions are and how much carbon they remove from the atmosphere.

The varied carbon flux across different forests of similar latitudes suggests that, while some forests, like those in Siberia, are continuing to increase their carbon uptake, others, like those in North America, may not. They may even absorb less as the climate changes.

“This research shows that we need to be thinking differently about how we understand the carbon cycle,” said study co-author Gretchen Keppel-Aleks, U-M assistant professor of climate and space sciences and engineering. “We can’t just lump ecosystems together by their latitude. We need to be thinking about individual species and specific seasonal cycles of temperature and precipitation.”

Researchers know that the swings in annual seasonal carbon flux have increased substantially in the past several decades. In the Northern Hemisphere, the intensity of the flux has gone up 30-50% since the 1960s, suggesting widespread ecological change. But because previous studies have focused on planetwide or hemisphere average fluxes, it has been unclear exactly what’s driving the increase.

“While that’s true on the whole, we found starkly divergent responses across regions,” Rogers said. “Siberia has been greening, strengthening its carbon sink and driving increases in seasonal CO2 exchange, but Arctic-boreal North America is showing much more browning under worsening stresses like fires, pests, and droughts.

“Going forward, we need to make sure our carbon budgets and models are fully incorporating what’s happening in Alaska and Canada, as these patterns are largely not captured in models and the region may soon transition from a carbon sink to a source.”
To produce their findings, the team began with actual measurements of atmospheric CO2, collected over decades by the National Oceanic and Atmospheric Administration.

They then worked backwards, using a computer model to calculate the regional surface emissions that would result in atmospheric carbon levels that matched the actual observations.

“We used these realistic surface fluxes and released them to the atmosphere in our model, and what’s unique is that we tagged individual regions differently,” Keppel-Aleks said. “We could watch red CO2 originating from Siberia, blue CO2 originating from North America, green CO2 originating from lower latitude ecosystems. That allowed us to figure out which regions are responsible for this increase in the seasonal cycle.”

NOAA doesn’t measure fluxes but instead measures carbon dioxide in the atmosphere and has been tracking the increase in the seasonal cycle since 1976 at sites like the Barrow Observatory in Alaska.

“These observations and the magnitude of the change we have measured are unparalleled compared with the many other sites across the globe where we track CO2 in the atmosphere—suggesting that something dramatic is happening in the Arctic that is not happening anywhere else,” said study co-author Colm Sweeney, associate director of the NOAA Global Monitoring Laboratory. “This study has helped us better understand and pinpoint the source of these dramatic observations.”

The research also corroborates earlier data that shows significant greening in Siberian forests alongside much less greening at similar latitudes in North America.

“It’s really significant that, using completely independent atmospheric data, we’re corroborating the browning and greening trends in the remote sensing data and showing that Siberian ecosystems do in fact seem to be growing more productive in the summer,” Keppel-Aleks said.

“It’s another unambiguous sign that humans are causing changes in the Earth’s ecosystems, and it shows that we need to develop a better understanding of those ecosystems if we want to predict what’s in store for the planet.”

The study is titled “Siberian and temperate ecosystems shape Northern Hemisphere atmospheric CO2 seasonal amplification.” It was funded by NASA Carbon Cycle Science and Arctic-Boreal Vulnerability Experiment grants NNX17AE13G and NNX17AC61A, by the Global Environmental Research Coordination system from the Ministry of the Environment of Japan, and with computational resources and services provided by Advanced Research Computing at U-M.