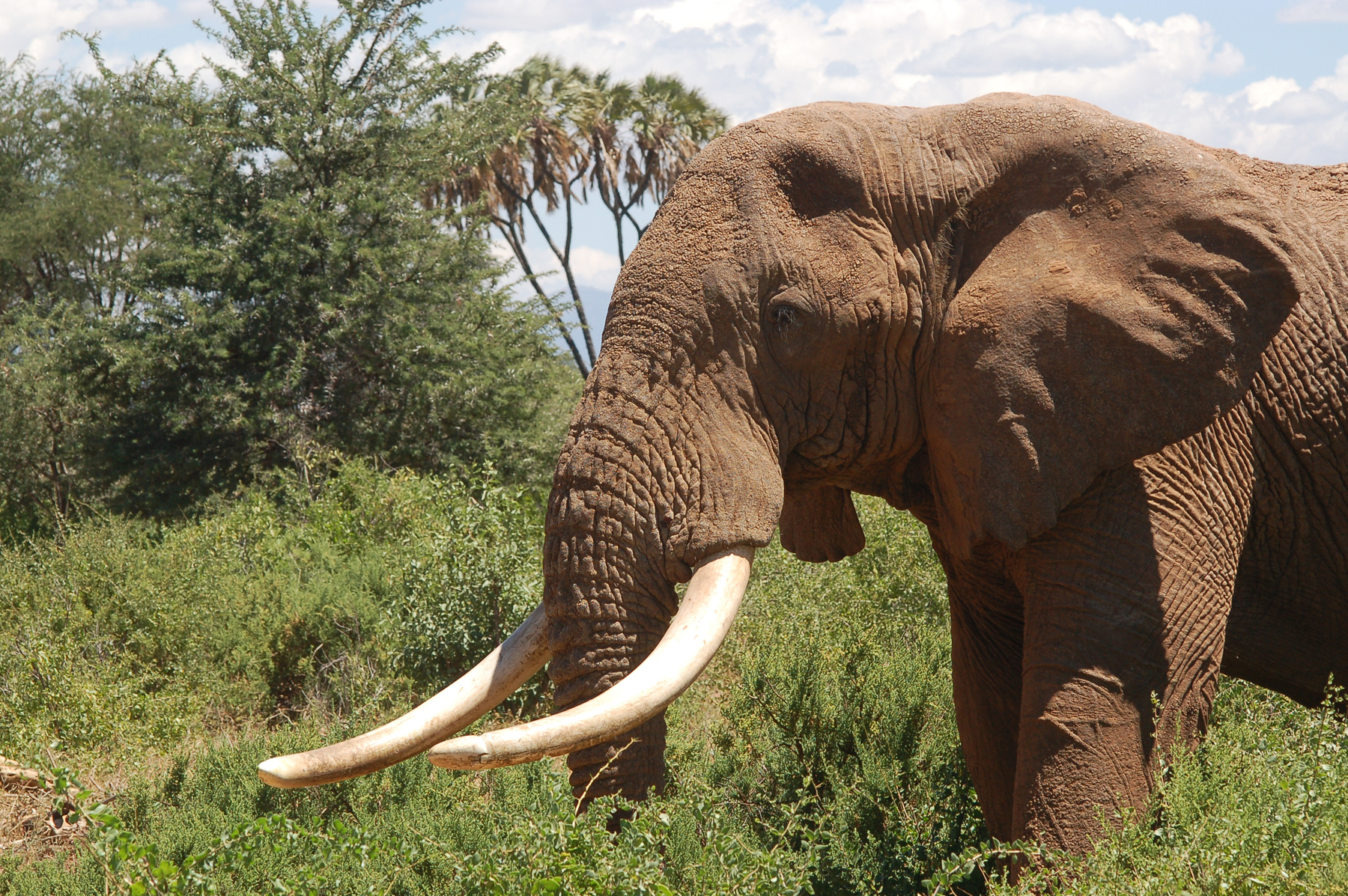 This African elephant has what are believed to be the biggest tusks among elephants at Kenya’s Samburu National Reserve. Illegal poaching of some 30,000 elephants a year for their ivory tusks threatens the animals with extinction. A University of Michigan researcher contributed to the development of a new technique that can be used to fight poaching of elephants, hippos, rhinos and other animals. The method measures the levels of carbon-14 in tusks or teeth, which reveals the year an animal died, and thus whether the ivory was taken before or after international bans on ivory trading. Image credit: Thure Cerling, University of UtahANN ARBOR—A University of Michigan researcher worked with University of Utah colleagues to develop a new weapon to fight poachers who kill elephants, hippos, rhinos and other wildlife.

By measuring radioactive carbon-14 deposited in tusks and teeth following open-air nuclear bomb tests, the method reveals the year an animal died, and thus whether the ivory was taken illegally.

“This could be used in specific cases of ivory seizures to determine when the ivory was obtained and thus whether it is legal,” said University of Utah geochemist Thure Cerling, senior author of the study.

U-M paleontologist Daniel Fisher worked with Cerling and a former University of Utah researcher, Kevin Uno, on the project. A report about the new method was published online July 1 in Proceedings of the National Academy of Sciences.

Fisher studies mammoths and mastodons, and over several decades has developed techniques to interpret the life histories of those prehistoric pachyderms by analyzing growth layers within their tusks. He shared those techniques with Cerling and Uno, who then applied them to modern-day elephant tusks and teeth.

“Not only can this method help wildlife forensics to combat poaching, but it’s also provided conclusive validation of earlier work that had suggested that tusks and many teeth are made of layers that reflect consecutive years in the life of the animal that grew them,” said Fisher, co-author of the paper and a U-M professor of paleontology and of Earth and environmental sciences.

“Whether we’re dealing with animals from today’s ecosystems or fossils from the remote past, we can study these layers and extract information on climate, diet and conditions of growth,” he said.

Uno, the study’s first author, conducted the research for his doctoral dissertation at the University of Utah and is now a postdoctoral researcher at Columbia University’s Lamont-Doherty Earth Observatory.

“The dating method is affordable and accessible to government and law enforcement agencies,” costing about $500 per sample, he said. “It has immediate applications to fighting the illegal sale and trade of ivory that has led to the highest rate of poaching seen in decades.”

The method uses the “bomb curve,” which is a graph—shaped roughly like an inverted “V”—showing changes in carbon-14 levels in the atmosphere, available for incorporation by plants and animals in the food chain. The carbon-14 was formed in the atmosphere by U.S. and Soviet atmospheric nuclear weapons tests in Nevada and Siberia from 1952 through 1962. Those levels peaked in the 1960s and have declined ever since but still are incorporated and measurable in plant and animal tissues.

International agreements banned most trade of raw ivory from Asian elephants after 1975 and from African elephants after 1989. In the United States, raw and worked African ivory (jewelry, figurines, gun and knife handles) is legal if it was imported before 1989. If worked ivory is imported after 1989, it must be at least 100 years old.

Yet tons of illegal ivory still are sold because dealers claim the ivory was taken before the ban and there has been no test to prove them wrong—until now.

“With an accurate age of the ivory, we can verify if the trade is legal or not” when the age is combined with existing DNA analysis to determine if an elephant is from Africa or Asia, said Uno. “Currently 30,000 elephants a year are slaughtered for their tusks, so there is a desperate need to enforce the international trade ban and reduce demand.”

Only 423,000 African elephants are left. Conservation groups say 70 percent of smuggled ivory goes to China. The United States is the next biggest illegal market. Rising ivory prices have drawn organized crime and spurred militias in Darfur, Uganda, Sudan and Somalia to kill elephants and sell tusks so they can buy guns.

Neutrons from the nuclear tests bombarded nitrogen—the atmosphere’s most common gas—to turn some of it into carbon-14. Cosmic rays do that naturally at a low level, but open-air nuclear tests in the 1950s and 1960s sharply increased atmospheric, plant and animal carbon-14 levels, followed by a steady decline ever since.

The method in the study is a bit like telling a tree’s age by its rings. But instead of counting rings, the researchers measured carbon-14 levels at various points along the lengths of elephants’ and hippos’ tusks and teeth.

The conventional way of measuring carbon-14 is to wait for and count when the isotope decays radioactively. In the study, the researchers used accelerator mass spectrometry, or AMS, which requires 1,000 times less material for analysis—a big advantage when sampling fossils or small pieces of worked ivory, Cerling said.

In AMS, the material being analyzed is bombarded with cesium atoms, which sputters off carbon atoms so the ratio of carbon-14 to carbon-12 can be measured.

The researchers tested the accuracy of carbon-14 dating in 29 animal and plant tissues killed and collected on known dates from 1905 to 2008. The samples included elephant tusks and molars, hippo tusks and canine teeth, oryx horn, hair from monkeys and elephant tails, and some grasses collected in Kenya in 1962.

Samples came from museums in Africa and elsewhere, and from Amina, an elephant that died naturally in Kenya in 2006, and from Misha, an African elephant euthanized in 2008 due to declining health at Utah’s Hogle Zoo in Salt Lake City.

The analysis revealed that various tissues that formed at the same time have the same carbon-14 levels, and that grasses and the animals eating them had the same levels. By determining carbon-14 in these samples of known ages, the researchers now can measure carbon-14 levels in other ivory to determine its age, within about a year.

The four oldest samples—from animals that died between 1905 and 1953—had minimal carbon-14 because they died before atmospheric nuclear weapons tests. So the test can identify pre-1955 ivory by its low, pre-nuclear-test levels of carbon-14.

Cerling said the method can determine the year of death for any animal killed after 1955, identifying the time of the most recent tissue formation – at the base of a tusk or tooth, for example. The method is less precise for animals killed more recently; it can tell if an animal died between 2010 and 2013 but cannot be more precise, this long after atmospheric testing ceased.

It takes about 5,700 years for half of the starting amount of carbon-14 to decay radioactively. But the amount in Earth’s atmosphere after the 1950s and 1960s bomb tests faded much more quickly because oceans and trees absorb carbon dioxide—including carbon-14—from the atmosphere. So the method won’t work for tusks or other tissues that grow after about 15 years from now, when atmospheric carbon-14 returns to pre-bomb levels.

While the method’s use against poaching is important, “the scientific part is the importance of understanding time in the formation of animal tissues and how diet and physiology is recorded in those tissues over time” as they grow, Cerling said.

The study was funded by the National Science Foundation, the National Geographic Society and the University of Utah. In addition to Uno, Fisher and Cerling, authors of the study are Jay Quade, of the University of Arizona; George Wittemyer of Colorado State University; Iain Douglas-Hamilton, founder of Save the Elephants; and Samuel Andanje, Patrick Omondi and Moses Litoroh, all of the Kenya Wildlife Services.