Number of Earth’s tree species estimated to be 14% higher than currently known, with some 9,200 species yet to be discovered 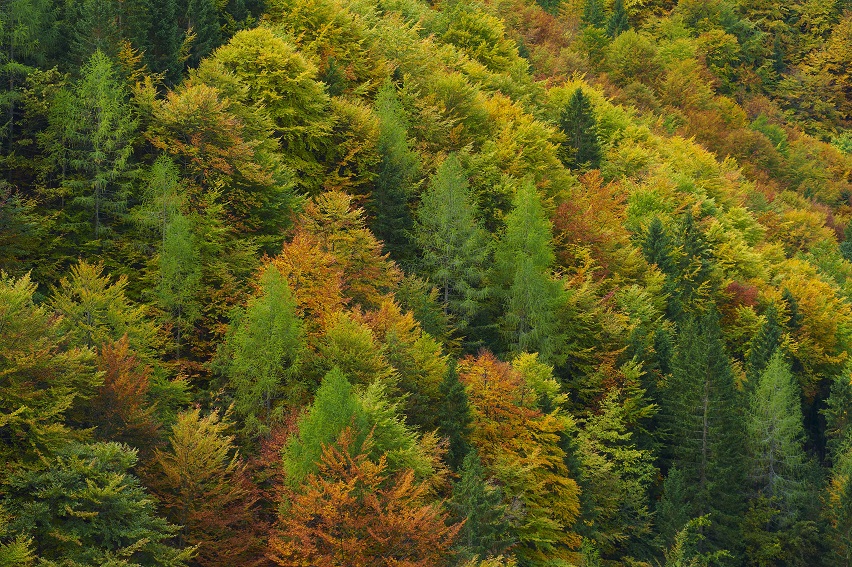 A new study involving more than 100 scientists from across the globe and the largest forest database yet assembled estimates that there are about 73,000 tree species on Earth, including about 9,200 species yet to be discovered.

The global estimate is about 14% higher than the current number of known tree species. Most of the undiscovered species are likely to be rare, with very low populations and limited spatial distribution, the study shows.

That makes the undiscovered species especially vulnerable to human-caused disruptions such as deforestation and climate change, according to the study authors, who say the new findings will help prioritize forest conservation efforts.

“These results highlight the vulnerability of global forest biodiversity to anthropogenic changes, particularly land use and climate, because the survival of rare taxa is disproportionately threatened by these pressures,” said University of Michigan forest ecologist Peter Reich, one of two senior authors of a paper scheduled for publication Jan. 31 in Proceedings of the National Academy of Sciences.

“By establishing a quantitative benchmark, this study could contribute to tree and forest conservation efforts and the future discovery of new trees and associated species in certain parts of the world,” said Reich, director of the Institute for Global Change Biology at U-M’s School for Environment and Sustainability.

For the study, the researchers combined tree abundance and occurrence data from two global datasets—one from the Global Forest Biodiversity Initiative and the other from TREECHANGE—that use ground-sourced forest-plot data. The combined databases yielded a total of 64,100 documented tree species worldwide, a total similar to a previous study that found about 60,000 tree species on the planet.

“We combined individual datasets into one massive global dataset of tree-level data,” said the study’s other senior author, Jingjing Liang of Purdue University, coordinator of the Global Forest Biodiversity Initiative.

“Each set comes from someone going out to a forest stand and measuring every single tree—collecting information about the tree species, sizes and other characteristics. Counting the number of tree species worldwide is like a puzzle with pieces spread all over the world.”

After combining the datasets, the researchers used novel statistical methods to estimate the total number of unique tree species at biome, continental and global scales—including species yet to be discovered and described by scientists. A biome is a major ecological community type, such as a tropical rainforest, a boreal forest or a savanna.

Their conservative estimate of the total number of tree species on Earth is 73,274, which means there are likely about 9,200 tree species yet to be discovered, according to the researchers, who say their new study uses a vastly more extensive dataset and more advanced statistical methods than previous attempts to estimate the planet’s tree diversity. The researchers used modern developments of techniques first devised by mathematician Alan Turing during World War II to crack Nazi code, Reich said. 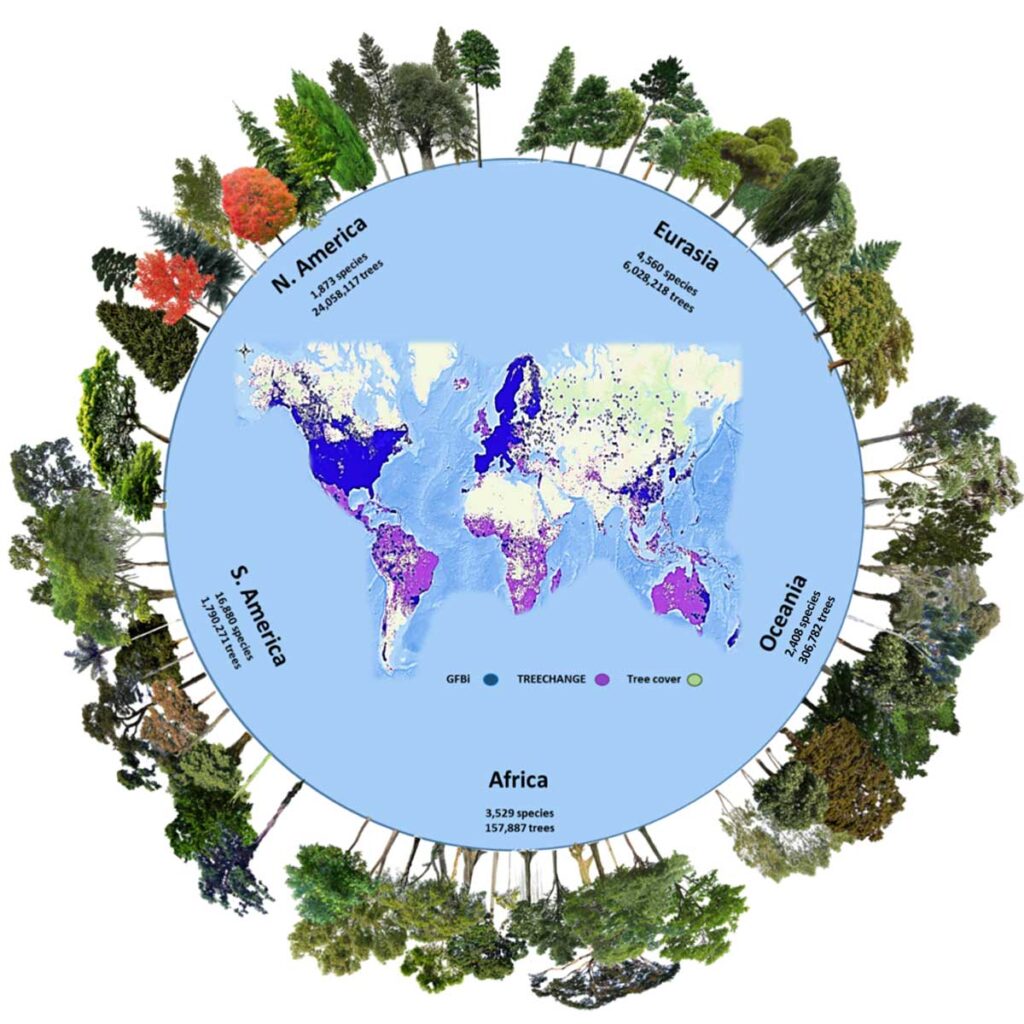 The number of tree species and individuals per continent in the Global Forest Biodiversity Initiative database, one of two databases used in the new study. GFBI data were merged with TREECHANGE data to provide the estimates in the new study. Green areas represent the global tree cover. The GFBI database contains records of about 38 million trees from 28,192 species. Depicted here are some of the most frequent species recorded in each continent. Image credit: Cazzolla Gatti et al. in PNAS, 2022

Roughly 40% of the undiscovered tree species—more than on any other continent—are likely to be in South America, which is mentioned repeatedly in the study as being of special significance for global tree diversity.

Hot spots of undiscovered South American tree species likely include the tropical and subtropical moist forests of the Amazon basin, as well as Andean forests at elevations between 1,000 meters (about 3,300 feet) and 3,500 meters (about 11,480 feet).

“Beyond the 27,000 known tree species in South America, there might be as many as another 4,000 species yet to be discovered there. Most of them could be endemic and located in diversity hot spots of the Amazon basin and the Andes-Amazon interface,” said Reich, who was recruited by U-M’s Biosciences Initiative and joined the faculty last fall.

“This makes forest conservation of paramount priority in South America, especially considering the current tropical forest crisis from anthropogenic impacts such as deforestation, fires and climate change,” he said. 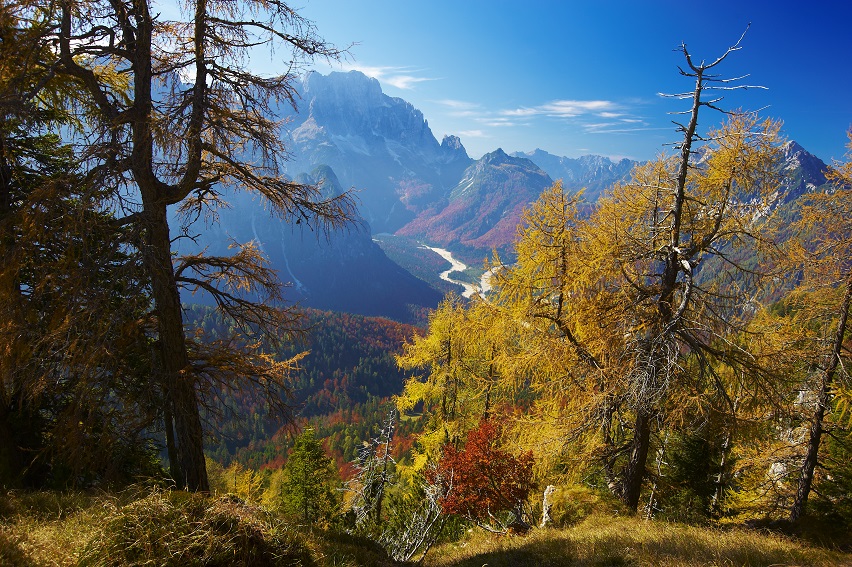 “Extensive knowledge of tree richness and diversity is key to preserving the stability and functioning of ecosystems,” said study lead author Roberto Cazzolla Gatti of the University of Bologna in Italy.

Forests provide many “ecosystem services” to humanity for free. In addition to supplying timber, fuelwood, fiber and other products, forests clean the air, filter the water, and help control erosion and flooding. They help preserve biodiversity, store climate-warming carbon, and promote soil formation and nutrient cycling while offering recreational opportunities such as hiking, camping, fishing and hunting.

More than 100 scientists from research groups around the world are co-authors of the PNAS study. Funding was provided by dozens of grants from various sources to the consortia of co-authors.