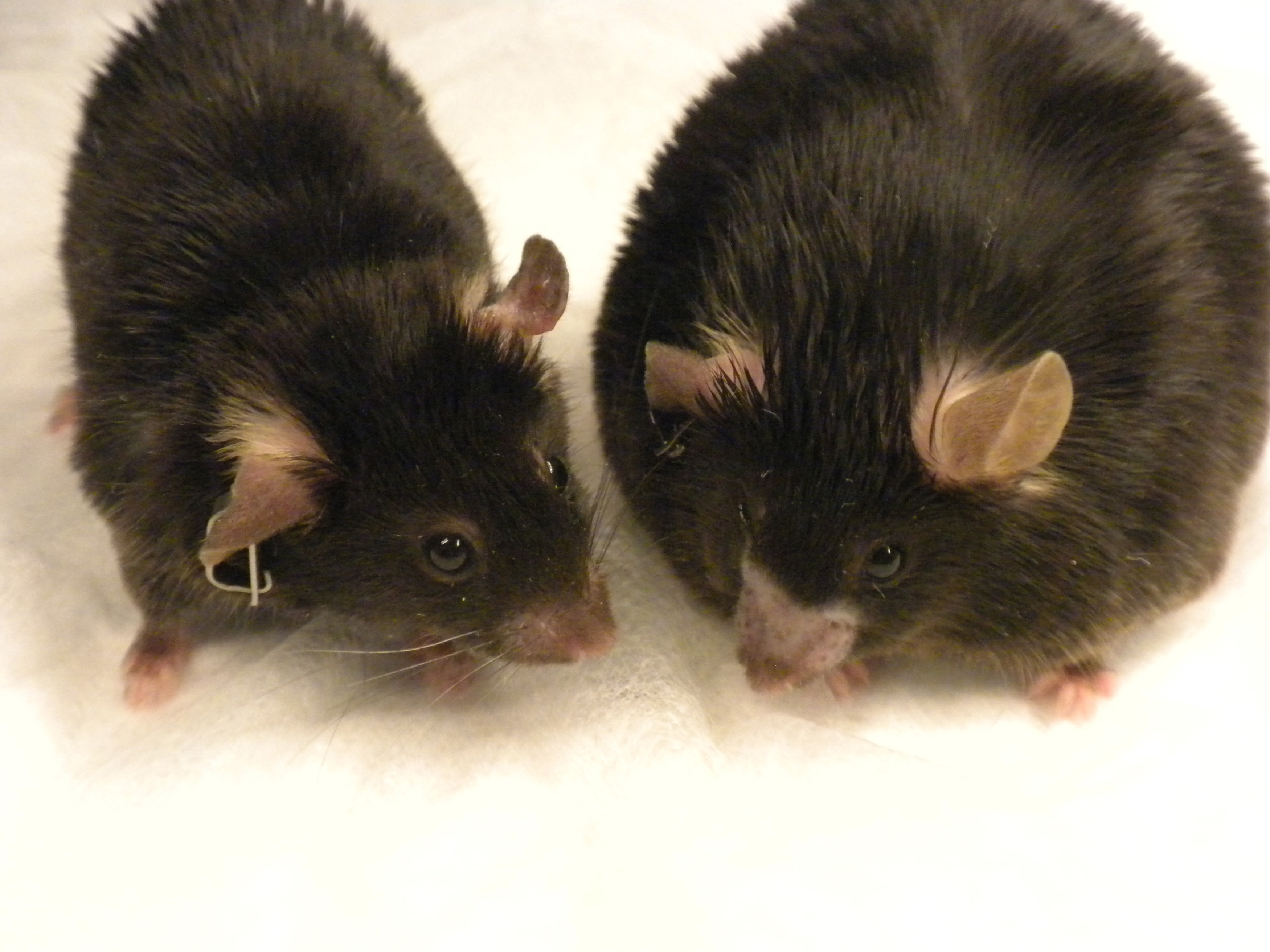 The obese mouse on the right was fed a high-fat diet. The mouse on the left was fed the same diet but is a normal weight after receiving amlexanox. Image credit: Shannon Reilly.ANN ARBOR—Researchers at the University of Michigan’s Life Sciences Institute have found that amlexanox, an off-patent drug currently prescribed for the treatment of asthma and other uses, also reverses obesity, diabetes and fatty liver in mice.

The findings from the lab of Alan Saltiel, the Mary Sue Coleman director of the Life Sciences Institute, are scheduled to be published online Feb. 10 in the journal Nature Medicine.

“One of the reasons that diets are so ineffective in producing weight loss for some people is that their bodies adjust to the reduced calories by also reducing their metabolism, so that they are ‘defending’ their body weight,” Saltiel said. “Amlexanox seems to tweak the metabolic response to excessive calorie storage in mice.”

Different formulations of amlexanox are currently prescribed to treat asthma in Japan and canker sores in the United States. Saltiel is teaming up with clinical-trial specialists at U-M to test whether amlexanox will be useful for treating obesity and diabetes in humans. He is also working with medicinal chemists at U-M to develop a new compound based on the drug that optimizes its formula.

The study appears to confirm and extend the notion that the genes IKKE and TBK1 play a crucial role for maintaining metabolic balance, a discovery published by the Saltiel lab in 2009 in the journal Cell. 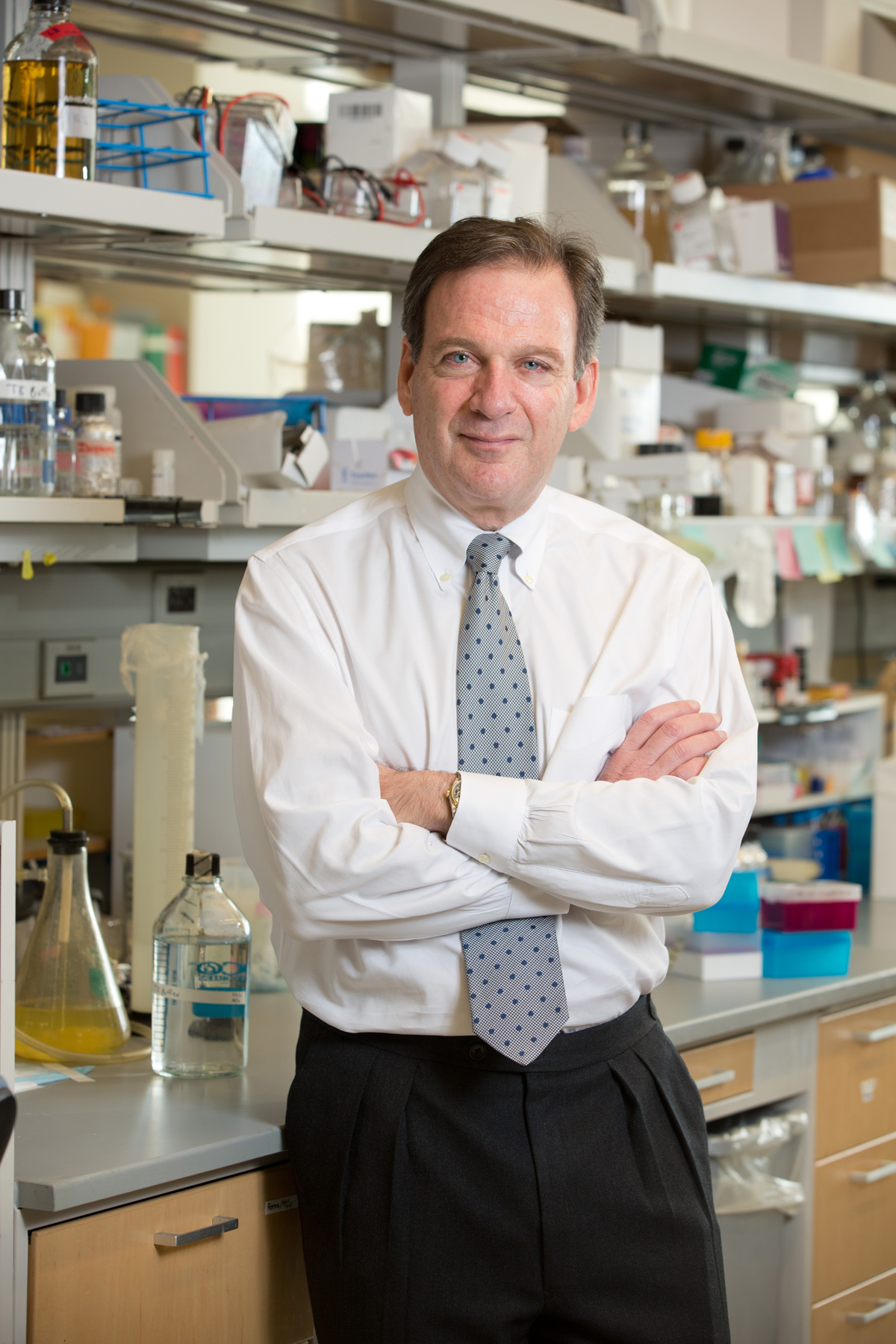 Alan Saltiel, director of the University of Michigan’s Life Sciences Institute. Image credit: Scott Soderberg, Michigan Photography.“Amlexanox appears to work in mice by inhibiting two genes—IKKE and TBK1—that we think together act as a sort of brake on metabolism,” Saltiel said. “By releasing the brake, amlexanox seems to free the metabolic system to burn more, and possibly store less, energy.”

Using high-throughput chemical screening at LSI’s Center for Chemical Genomics to search for compounds that inhibit IKKE and TBK1, the researchers hit upon an approved off-patent drug: amlexanox. They then demonstrated that amlexanox had profound beneficial effects in both genetic and dietary-induced obese mice. The chemical lowered the weight of obese mice and reversed related metabolic problems such as diabetes and fatty liver.

“These studies tell us that, at least in mice, the IKKE/TBK1 pathway plays an important role in defending body weight by increasing storage and decreasing burning of calories, and that by inhibiting that pathway with a compound, we can increase metabolism and induce weight loss, reverse diabetes and reduce fatty liver,” Saltiel said.

The drug has been on the market in Japan for more than 25 years.

However, the researchers don’t yet know if humans respond with the same pathway, or if the discovery of amlexanox’s effectiveness in mice can lead to a compound that is safe and effective for treating obesity and diabetes in humans.

“We will be working hard on that,” Saltiel said.

Saltiel’s search for a drug targeting the IKKE/TBK1 pathway was supported by the Life Science Institute’s Innovation Partnership, which provides philanthropic funding and business mentorship to help move promising research toward commercialization.

The research was also supported by the National Institutes of Health, the Michigan Diabetes Research and Training Center, the Michigan Institute for Clinical and Health Research, and the Nathan Shock Center in the Basic Biology of Aging.

Saltiel is the Mary Sue Coleman director of the Life Sciences Institute, where his laboratory is located and all his research is conducted. He is also the John Jacob Abel Collegiate Professor in the Life Sciences and a professor of internal medicine and molecular and integrative physiology at University of Michigan Medical School.