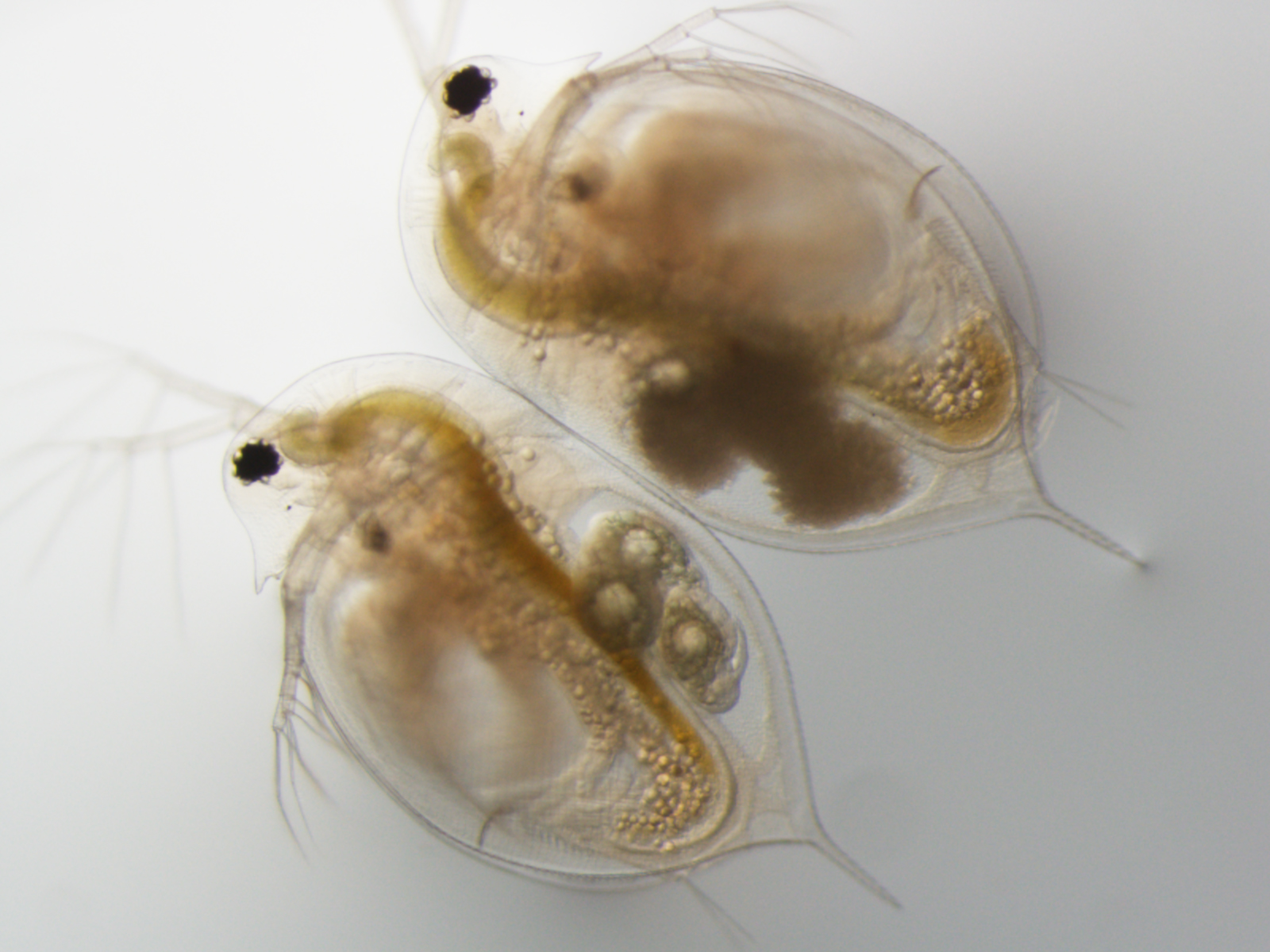 This bright-background microscope image shows two sand grain-size Daphnia crustaceans. The one on the left has three healthy embryos in its brood chamber. The one on the right has three embryos that have been attacked by the virulent parasite Blastulidium paedophthorum. Image credit: Meghan DuffyANN ARBOR—A months-long literature search that involved tracking down century-old scientific papers and translating others from Czech and French helped University of Michigan ecologist Meghan Duffy answer a question she’d wondered about for years.

The early studies helped Duffy determine that the microscopic aquatic parasite she first observed as a graduate student, and which her research team had recently collected in more than a dozen southeast Michigan lakes, is the same fungus-like organism that a French biologist first described in 1903.

“The longer historical perspective—especially that provided by the non-English literature—has been essential,” said Duffy, an associate professor in the Department of Ecology and Evolutionary Biology. “If not for those papers, we would think that this parasite hadn’t been described before and was in need of a name.”

But it already has a name: Blastulidium paedophthorum, coined by biologist C. Pérez when he described it in 1903. Bp, the shorthand name favored by Duffy and her colleagues, attacks the developing embryos of Daphnia, the sand grain-size freshwater crustaceans also known as water fleas.

In a study scheduled for August publication in the print edition of Applied and Environmental Microbiology, Duffy and two colleagues connect previous descriptions of the parasite with new information about its ecology and evolutionary history.

They surveyed six Daphnia species in 15 southeastern Michigan lakes and found that Bp is common in all of the lakes. They used morphology, DNA sequences and laboratory infection experiments to show that Bp is a widespread, virulent, multi-host parasite. While infection with Bp did not reduce Daphnia lifespan, it significantly impacted host fecundity, the researchers found. 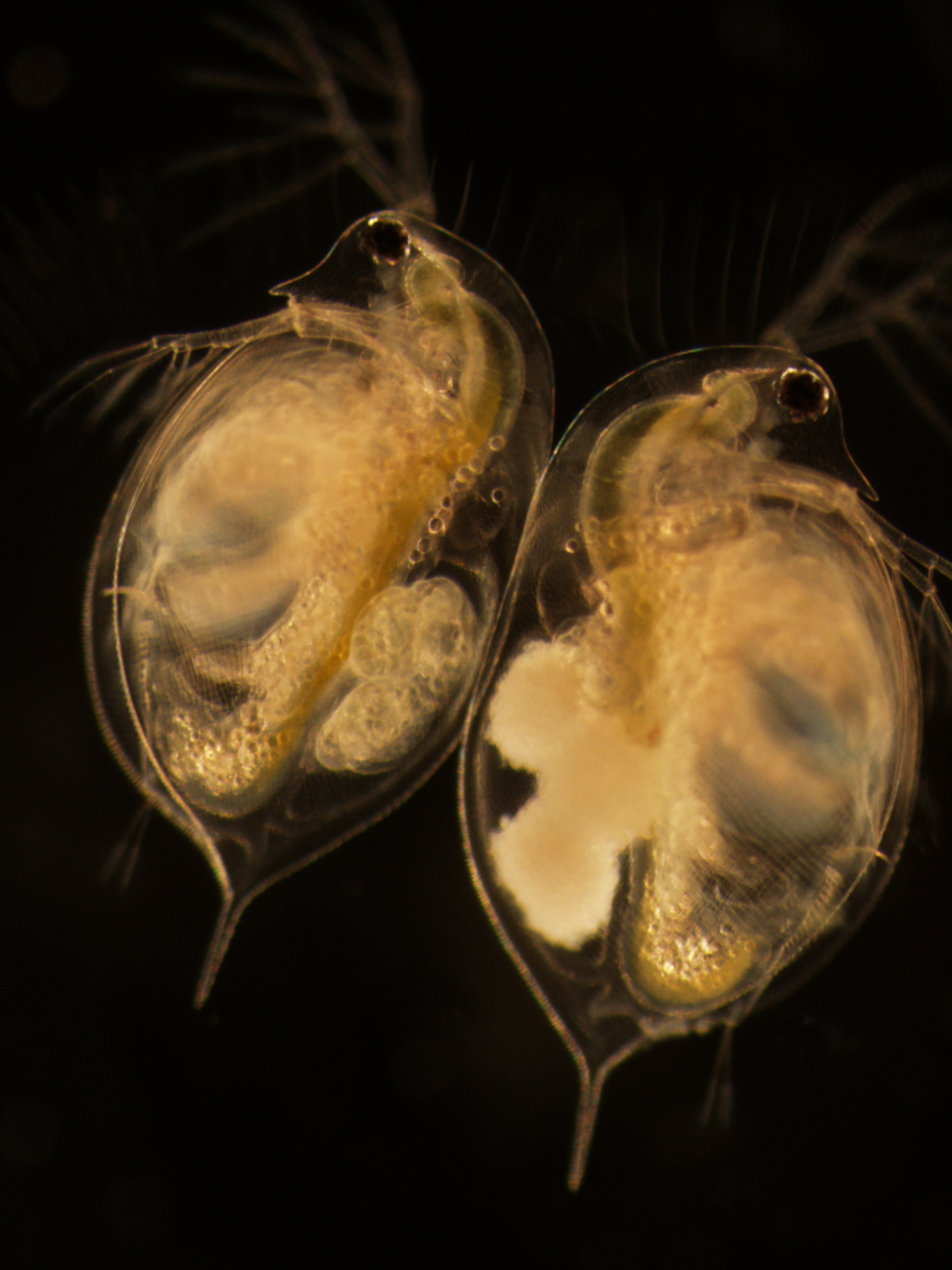 This dark-background microscope image shows two sand grain-size Daphnia crustaceans. The one on the left has three healthy embryos in its brood chamber. The one on the right has three embryos that have been attacked by the virulent parasite Blastulidium paedophthorum. Image credit: Meghan DuffyBased on Bp’s abundance and Daphnia’s pivotal role at the base of freshwater food webs, the researchers conclude that Bp may be an important driver of Daphnia ecology and evolution and may influence the larger freshwater food web, as well.

The study also confirmed that Bp is the same organism first described by Pérez.

Duffy’s curiosity about the parasite that she first noticed as a graduate student led her to read every published paper on parasites that attack developing embryos—commonly known as brood parasites—of Daphnia.

“This started me down a path of reading some really old papers, nearly all of which were in foreign languages,” Duffy wrote recently in the blog Dynamic Ecology. “Reading them involved a combination of trying to remember my high school French, lots of time with Google Translate and, ultimately, seeking out translators.”

“It’s felt like a classic, old-school literature hunt, and that’s been a lot of fun,” wrote Duffy, whose research focuses on the ecology and evolution of infectious diseases, particularly in lake Daphnia populations. “Here’s hoping we all find the time to really dig into the literature and that, while doing so, we remember that there’s a lot of value in digging into the classic, non-English literature.”

Co-authors of the study are Timothy James of the U-M Department of Ecology and Evolutionary Biology and U-M undergraduate Alan Longworth. The work was supported by grants from the National Science Foundation and by U-M’s Undergraduate Research Opportunities Program.