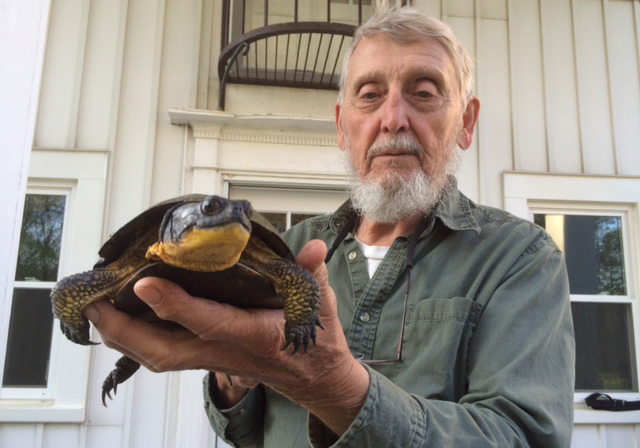 The turtle was captured Monday at U-M’s Edwin S. George Reserve, about 25 miles northwest of Ann Arbor in southwestern Livingston County, near Pinckney. This individual, known as 3R11L, was first captured and marked in 1954, one year after the start of the reserve’s long-running turtle study. It has been recaptured more than 50 times since then.

Blanding’s turtles reach sexual maturity at around age 20. Since 3R11L was sexually mature when first captured in 1954, she is believed to be at least 83 years old, according to turtle researcher Justin Congdon, who began studying the E.S. George turtles in the mid-1970s.

“There was a lot of excitement and a lot of high-fives when we caught it, and we celebrated with a bottle of Cabernet,” said Congdon, a professor emeritus at the University of Georgia who studied the E.S. George turtles every nesting season from 1975 through 2007. He came out of retirement to return to the reserve this month.

“We knew that we were down to fewer than 15 of the turtles that were marked in the 1950s,” he said. “We figured we still had a chance to catch one, and it has been one of our goals to do so.”

The previous longevity record for a Blanding’s turtle was a 76-year-old individual from Minnesota, he said. Other types of turtles, including box turtles, wood turtles and sea turtles—as well as tortoises—are thought to live longer.

“This is just one example that shows the importance of our multigenerational investment in the biological sciences,” said Andrew Martin, dean of the U-M College of Literature, Science, and the Arts.

“If we hadn’t continued this work over the decades, we would have no idea how long-lived these turtles are or how they respond to ecological changes,” said U-M biologist Christopher Dick, director of the E.S. George Reserve. 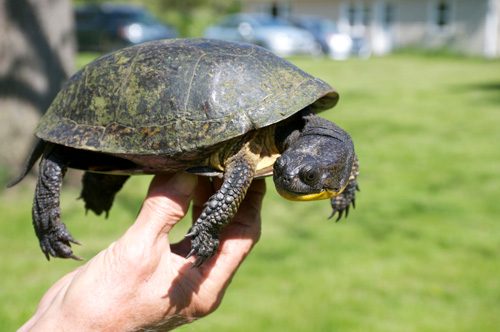 An 83-year-old Blanding’s turtle at U-M’s E.S. George Reserve near Pinckney. The turtle was first captured in 1954 as part of a long-term study of turtle life histories and reproductive success. Image credit: Christopher DickCongdon said that when he examined 3R11L, he felt what he believes are soft-shelled eggs inside of her. In his decades of research at the E.S. George Reserve, Congdon found that the oldest female Blanding’s turtles he captured had more egg clutches than the younger ones, as well as more eggs per clutch.

“Reptiles basically reproduce until something kills them,” Congdon said. “So if it turns out that this individual is gravid, it would not come as a total surprise. Even so, this would be quite a bit older than has been documented in many other snakes and turtles.”

While the population of Blanding’s turtles at the E.S. George Reserve appears to be stable, that’s not the case in other parts of the animal’s range. It is protected by Michigan law as a special concern species. And about a year ago, the U.S. Fish and Wildlife Service said it would assess the status of five reptiles and amphibians to determine whether Endangered Species Act protection is warranted. Blanding’s turtles were one of the five species; the study is ongoing.

Dick said the reserve has initiated a restoration program to improve historically important nesting habitat for Blanding’s turtles. They prefer to nest in open, sandy locations with lots of sunlight.

But over the years, a non-native shrub called autumn olive has invaded many longtime nesting sites in the reserve. During the past year, autumn olive was removed to restore nesting habitat, Dick said.