ANN ARBOR—Many policymakers and scholars believe offering paid leave to families would be a game changer for U.S. moms and families, leading to increased equity in labor markets and helping eliminate the “mommy gap” in pay.

But a University of Michigan-led study found that longer paid leave seems to have the reverse effect. Studying the short- and long-term effects of California’s 2004 Paid Family Leave Act, or PFLA, in IRS tax data, the study shows that first-time moms who used the policy saw their employment fall by 7% and annual wages fall by 8% over the next decade. They find no effect on the likelihood that mothers remain with their prebirth employer.

Cumulatively, new moms taking up paid leave had fewer children and had earned about $25,681 less by 2014, reflecting a gain in wage replacement dollars but also income losses over 10 years. One in 10 new mothers also had one less child after 10 years.

“California increased the availability of paid leave by about six weeks, which is still very stingy compared to European policies. We were surprised that this modest policy seems to be nudging mothers out of the labor force,” said Martha Bailey, professor of economics and research professor at the Institute for Social Research’s Population Studies Center at U-M. 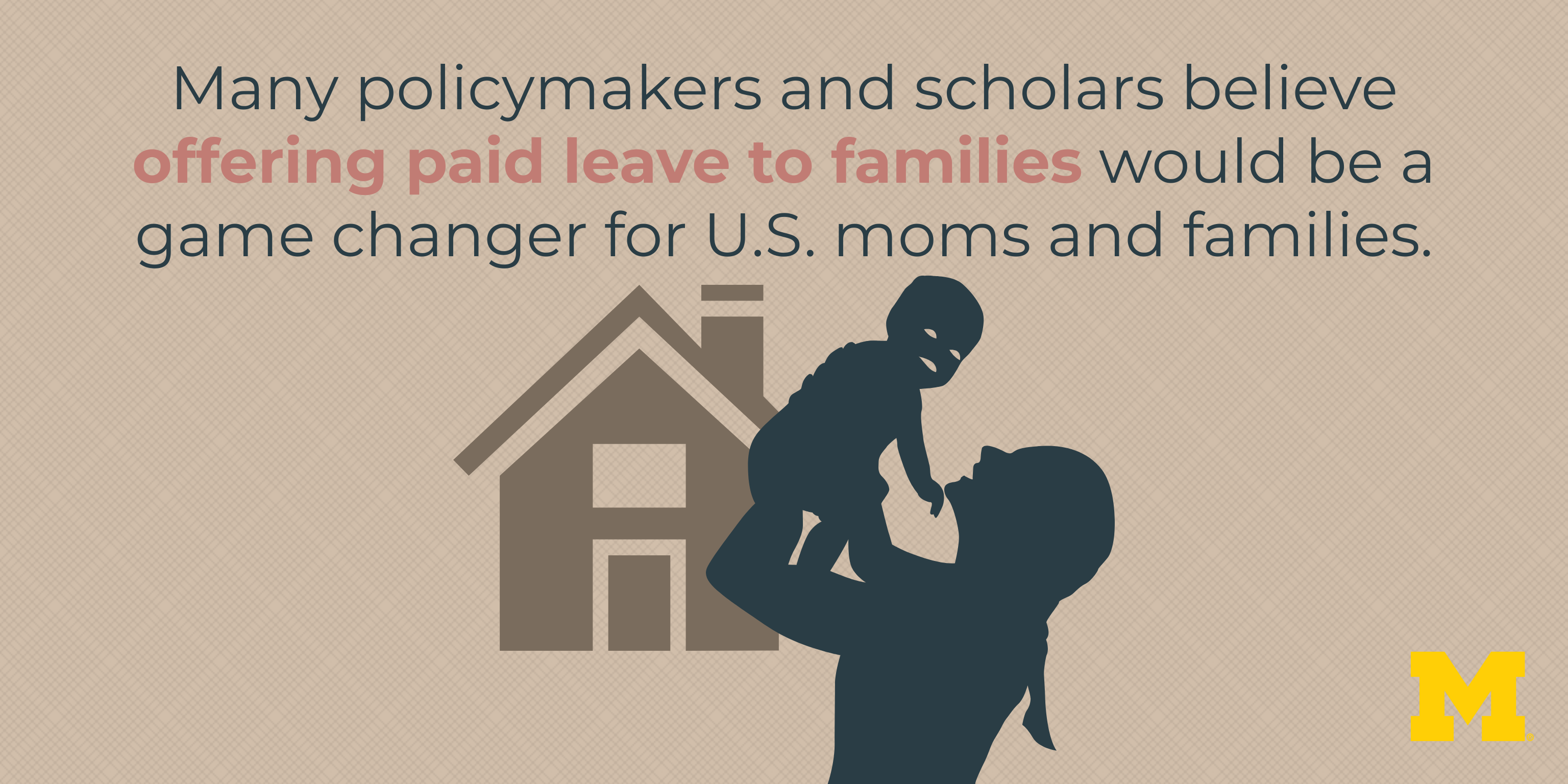 Despite the fact that California’s PFLA also gave men paid leave for family and infant care, the study found no impact on men’s employment or annual wage earnings. California’s PFLA seems to be encouraging men and women into traditional gender roles rather than leveling the playing field at work, according to Bailey.

“At the end of the paper, we looked at what might be going on: are firms pushing women out or are women opting out?” she said.

Bailey stressed that this question is hard to answer with tax data, but it provided some clues. One, is that the PFLA had different effects on new mothers and mothers with children born before the policy.

“It seems unlikely employers are systematically discriminating against employees who are new mothers taking leave in 2004 but not against women who used paid leave for their second child,” Bailey said. 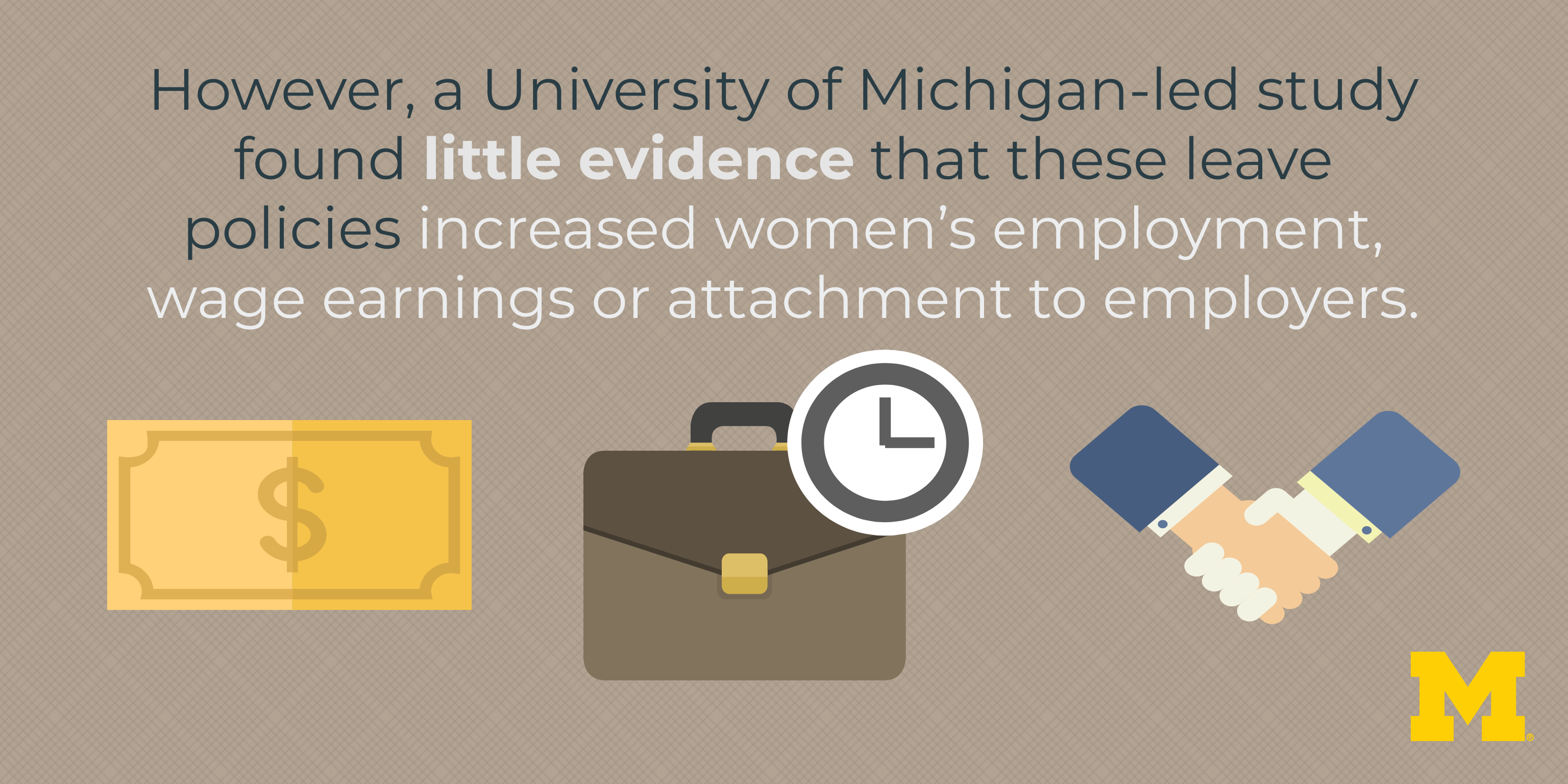 Using survey data, the researchers also found that mothers taking paid leave were more likely to read to their children as well as go on outings. The researchers interpreted this as evidence that new mothers were learning how to parent and work differently because of the policy.

The research team thinks the effect is concentrated in first-time mothers because this is when families learn how to balance work and family life, perhaps with one partner specializing in work at home and the other going back to work.

“This is suggestive evidence that this isn’t targeting women, that the effect is operating more on women’s side of making different choices,” Bailey said.

“One of the things this study tells us is that we have to be really careful in designing policy, Bailey said. “Increasing access to paid leave for everyone when mostly women take advantage of this could create greater specialization.

“Requiring men to use paid policies as in some European countries could help equalize caregiving, if that’s what we want to achieve. If the idea is increasing equality in the workforce, we have to carefully consider the disparate impact of policies that seem gender neutral.”