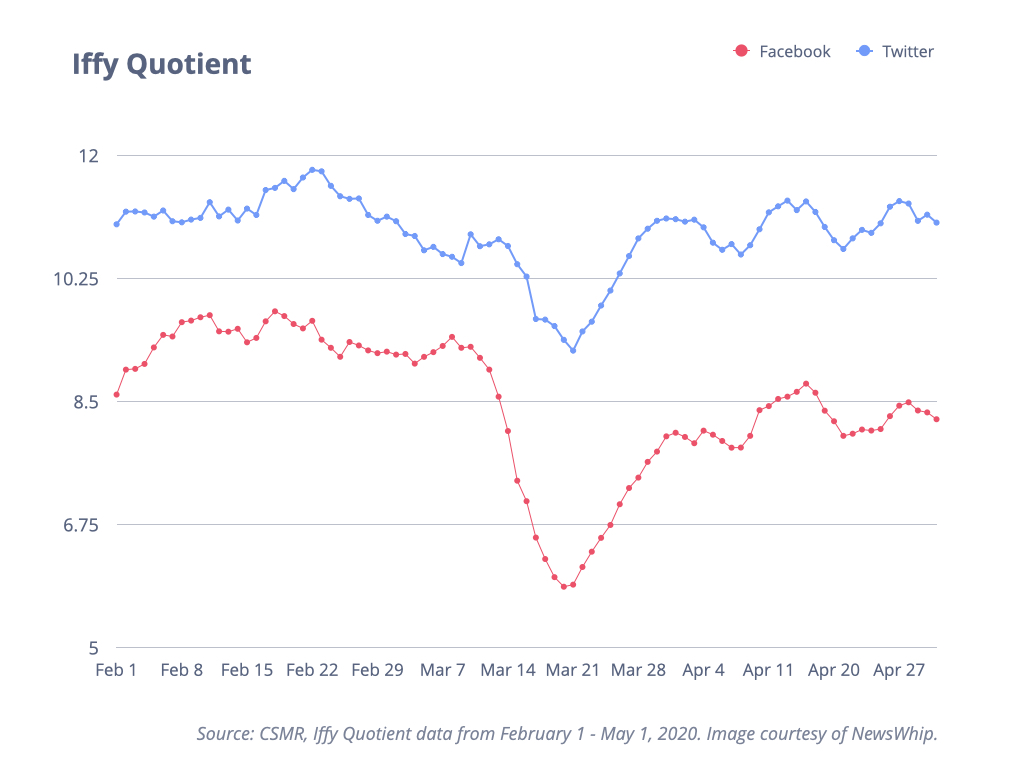 When information becomes a matter of life or death or is key to navigating economic uncertainty, as it has during the COVID-19 pandemic, it appears people turn to tried and true sources of information rather than iffy sites that have become increasingly part of the social media news diet in recent years.

Researchers at the University of Michigan Center for Social Media Responsibility, an interdisciplinary center at the School of Information, say this “flight to quality” is similar to the behavior people exhibit when financial markets are volatile.

“When financial markets get shaky, people move their money into gold or other investments that they perceive to be less risky,” said Paul Resnick, the Michael D. Cohen Collegiate Professor of Information and director of the interdisciplinary center that developed a tool called the Iffy Quotient, which measures the fraction of the most popular URLs on Facebook and Twitter that come from iffy sites.

When financial markets get shaky, people move their money into gold or other investments that they perceive to be less risky

“During the early days of the COVID-19 lockdown in the U.S., there was apparently an analogous ‘flight to quality’ in the public’s attention allocation. People paid more attention to news from mainstream sites and less attention to iffy sites, at least if the URLs that were most shared on Facebook and Twitter provide any indication.”

For the Iffy Quotient, the most popular URLs each day are determined by NewsWhip, one of the center’s partners. Another partner, NewsGuard, provides the site ratings, with Media Bias/Fact Check ratings used for sites that are not rated by NewsGuard.

In late February, the researchers noticed a drop in the Iffy Quotient: fewer of the popular URLs on both Facebook and Twitter were coming from iffy sites. They decided to check whether there was an associated surge in sharing of articles from mainstream sources, which might be interpreted as a flight to quality in uncertain times.

To conduct the analysis of a “Mainstream Quotient,” they identified a set of 30 mainstream news sources. These were taken from a 2019 academic study on news source quality published in the Proceedings of the National Academy of Sciences. The list includes the New York Times, Washington Post, CNN, FOX News, NPR, PBS, Bloomberg, The Economist, Newsweek and more. 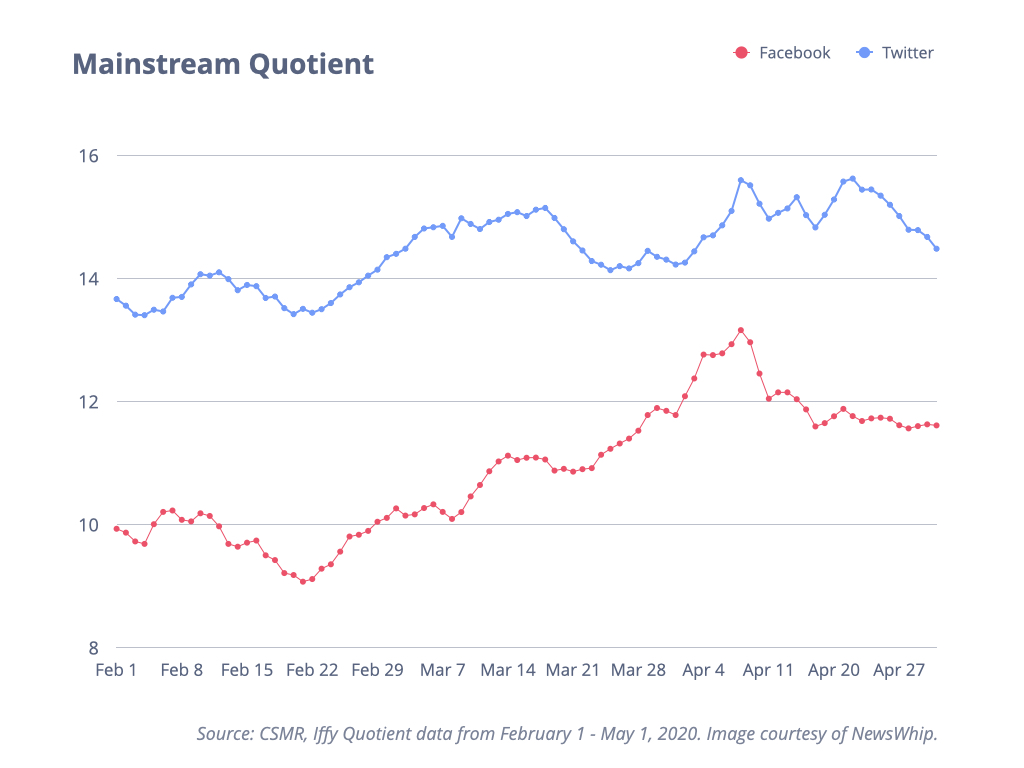 Between Feb. 10-21, the Mainstream Quotient decreased from 10.2% to 9.1%, but thereafter rose steadily until April 8, when it hit 13.2%—the highest in the history of the Iffy Quotient data (starting in January 2016). This mainstream percentage has trended a little lower (~10.5%-12.5%) since April 8 but is still higher than in the weeks and months before Feb. 10. In fact, the percentage hasn’t hovered around this level since mid-to-late June 2018 or a few similar times in fall 2018.

The mainstream news situation is also similar on Twitter. Between Feb. 10-22, the Mainstream Quotient decreased from 14.1% to 13.4%, then rose generally steadily until April 8, when it hit 15.6%—the highest since early October 2019. The percentage has hovered between 14.1%-15.6% since April 8 (with a slightly bigger dip for about a week in late May/early June), again higher than in the months before Feb. 10.

Even with this shift in news preference, the vast majority of the most popular content most days came from neither iffy sites nor mainstream news sites. Typically, the two combined for less than a quarter of all the popular URLs. Entertainment, gaming and other non-news content, as well as content from other news sites outside the small list of mainstream sites, make up the majority of the most popular content.

“Presumably, this reflects a combination of changes in user behaviors (greater interest in mainstream news sources, less in iffy sources) and actions taken by the platforms,” said James Park, assistant director of the Center for Social Media Responsibility.

“On a number of occasions Facebook and Twitter have publicly announced their efforts to combat the spread of misinformation about COVID-19, ranging from the removal of such content to the addition of warning labels and messages and, on Facebook, a ‘COVID-19 Information Center.'”

Launched in October 2018, the first Iffy Quotient report confirmed from a deep analysis that public attraction on Facebook and Twitter to iffy news sources during the 2016 U.S. presidential election was higher leading up to the election.

Nearly a year later it showed some decline in questionable news, perhaps attributed to social media platform crackdowns or people sharing fewer iffy stories, the researchers said. It rose again in the second half of 2019 and into mid-February 2020, when the researchers noticed a shift that seemed to correlate with the early days of COVID-19 lockdown in the U.S.

“It will be interesting to see whether this ‘flight to quality’ is short-lived,” Resnick said. “Already we have seen a rebound in the Iffy Quotient and a slight decline in the Mainstream Quotient, though it is promising that the latter is still higher than it was pre-COVID-19. Will the Iffy Quotient continue to climb? Will the flight to information quality endure?”