ANN ARBOR—A carbon nanotube coating developed at the University of Michigan acts as a “magic black cloth” that conceals an object’s three-dimensional geometry and makes it look like a flat black sheet.

The 70-micron coating, or carbon nanotube carpet, is about half the thickness of a sheet of paper. It absorbs 99.9 percent of the light that hits it, researchers say.

“You could use it to completely hide any 3D attributes of an object,” said Jay Guo, a professor in the Department of Electrical Engineering and Computer Science and principal investigator.

“It’s not cloaking, as the object can still cast a shadow. But if you put an object on a black background, then with this coating, it could really become invisible.”

A paper on the research is newly published online in Applied Physics Letters. 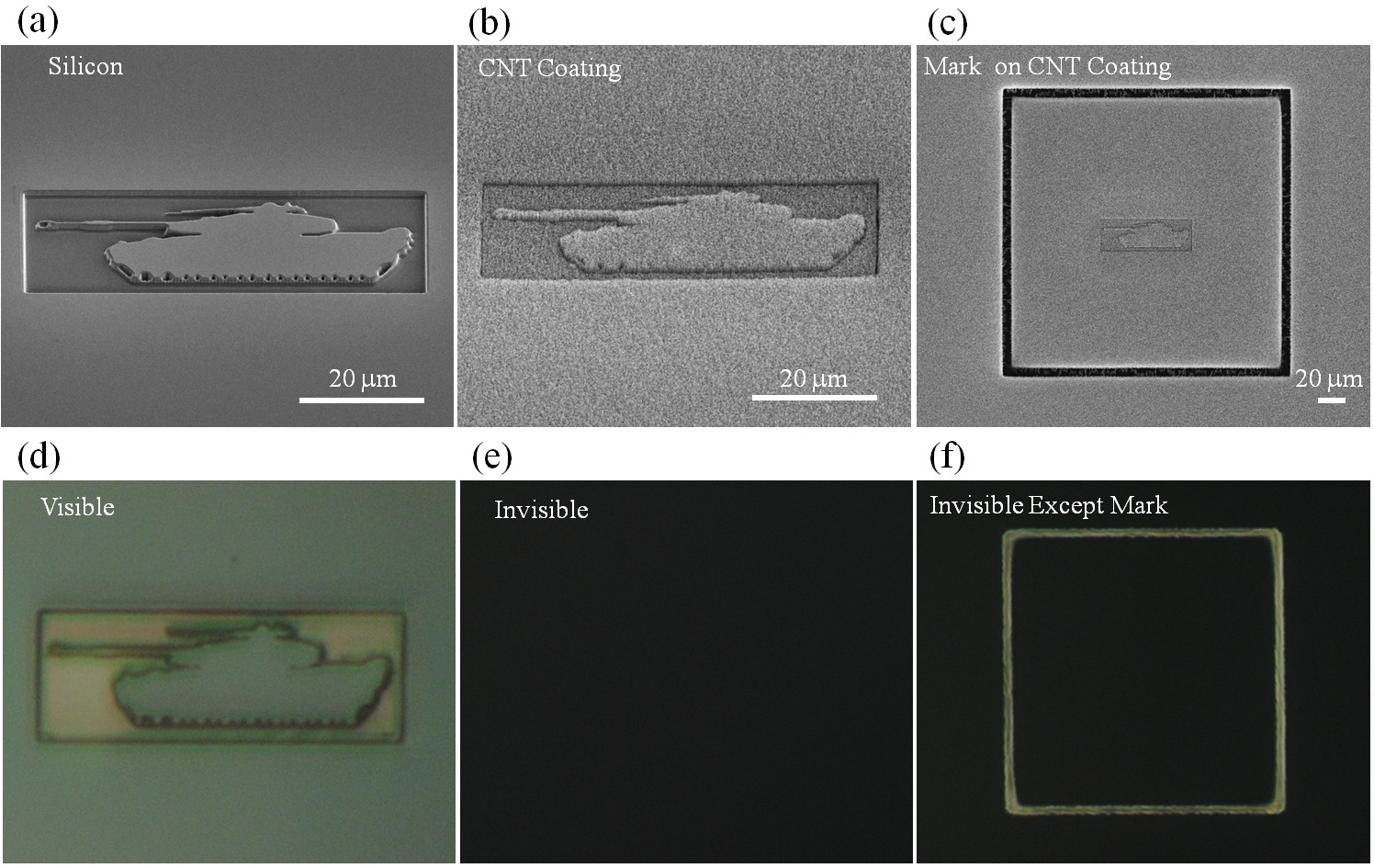 To demonstrate this concept, the researchers made a raised, microscopic tank shape on a piece of silicon. They then grew the carbon nanotube carpet on top of the entire silicon chip. In photos taken through an optical microscope, they show that the tank is imperceptible. As a control, they did this again, carving out a rectangle that was not coated with carbon nanotubes. The rectangle is visible on this chip, but the tank remains hidden.

Here’s how the new coating works: Human eyes perceive an object based on how it reflects or scatters light. The “refractive index” of this new coating is similar to that of air, meaning light traveling through air doesn’t scatter or reflect when it hits the coating.

It’s well known that carbon nanotubes are capable of absorbing light, but the researchers were able to push it to such a high percentage by spacing them just right.

The “perfect black” material Guo’s team created for this coating has a host of varied applications. It could possibly be used in display screens for ultra-high contrast and a crisper picture. It holds promise as solar heating device. The National Institute of Standards and Technology is using a similar material to absorb infrared light and measure the amount of heat it can generate.

The coating could inspire a new type of camouflaging paint for stealth aircraft. Today’s stealth planes use shape to scatter electromagnetic waves and avoid detection, and this scheme could actually absorb the waves.

“The carbon nanotube forest can absorb very wide range of electromagnetic wave from ultraviolet up to terahertz,” Guo said, “and in principle it can be applied to an arbitrary sized object.”

Just how large an object? Guo suggested an intriguing possibility—perhaps entire planets or even stars.

“Since deep space itself is a perfect dark background, if a planet or star were surrounded by a thick, sooty atmosphere of light-absorbing carbon nanomaterial gases, it would become invisible due to the same principle,” Guo said. “It would become totally dark to our instruments that rely on the detection of electromagnetic waves. Could this explain some of the missing matter in the universe?”

X-rays or gamma rays would be able to penetrate through the hypothetical “dark veil” Guo proposes. Or, objects behind such veils would cast a shadow by distant stars behind them.

The paper is called “Low density carbon nanotube forest as an index-matched and near perfect absorption coating.” Other co-authors are electrical engineering post-doc Haofei Shi and Ph.D. student Hyoung Won Baac and mechanical engineering Ph.D. student Jong Ok. The university is pursuing patent protection for the intellectual property, and is seeking commercialization partners to help bring the technology to market.