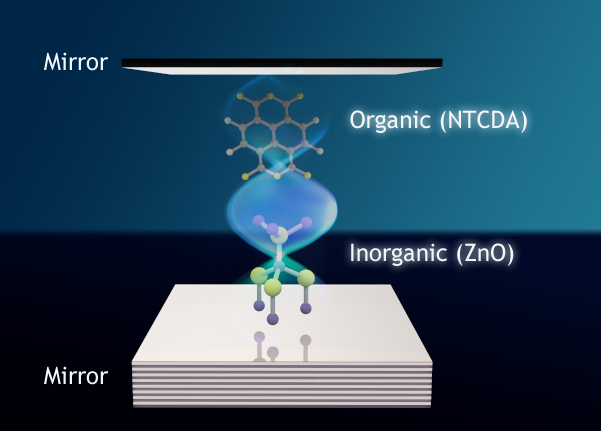 The effect could harness the most useful characteristics from each material for hybrid solar cells and high efficiency lighting, among other applications.

Researchers at the University of Michigan and Queens College, City University of New York, used light to create links between organic and inorganic semiconductors in an optical cavity—a mirror-lined nanoscale filament about 1/1,000th the width of a hair.

Semiconductors are materials whose electrical conductivity can be adjusted by adding impurities, known as dopant atoms. They’re used in all electronic devices, including cell phones and laptops, and also in solar cells and light-emitting diodes.

Organic semiconductors are made of carbon-rich compounds that don’t necessarily come from biological sources, but resemble them. They are newer to the market than their inorganic counterparts such as silicon. But they are finding widespread applications in smart phone displays and room lighting. Organics hold promise to be flexible and inexpensive, perhaps even deployed on large plastic rolls.

“What we’ve done is taken the excited states of two principally different materials and combined them into a new quantum mechanical state that shares their best properties,” said Stephen Forrest, professor of physics and materials science and also the William Gould Dow Collegiate Professor of Electrical Engineering.

“Developing engineered nonlinear optical materials with properties that surpass naturally occurring materials is important for developing next generation photonic technologies that rely on the quantum properties of light,” Menon said. “For example, one could develop an optical switch that uses one photon to turn on or off the path of a second photon. This is basically a light switch that regulates light, one photon at a time—an important building block for quantum communication and computing.”

To demonstrate the effect, the researchers started with an inorganic semiconductor—zinc oxide—and made it into nanowires. Then they surrounded it with an organic material—naphthalene tetracarboxylic dianhydride, or NTCDA.

“We chose these two materials because their excited states would be at nearly the same energies. That is, they are in resonance with one another. And we then sandwiched them between two mirrors to form an optical cavity that traps photons, also at the same energy as the excited states,” Forrest said.

He likened the construction to two swings connected by a spring. The swings in this case are excitons, or electronically attractive electron-hole pairs. An electron is a negatively charged subatomic particle and a “hole” in this context is the absence of an electron. In a semiconducting material, a hole carries a positive charge.

In the optical cavity, the photon essentially “glues” together all these quantum mechanical states, forming a unique and potentially useful new state called a polariton that can efficiently transfer energy from one material to another, Forrest said.

“In that new state lies their magic,” he said. “Uses in solar energy conversion, light emission and optical switching are just a few examples of applications that can benefit.

The study is titled “Room Temperature Frenkel-Wannier-Mott Hybridization of Degenerate Excitons in a Strongly Coupled Microcavity.” The graduate students who led the experiments are Michael Slootsky, a doctoral student in physics and engineering at U-M, and Xiaoze Liu a doctoral student at CUNY. The paper is published in the current issue of Physical Review Letters. The research is funded by the National Science Foundation Division of Material Research.