Pioneering a way to keep very small satellites in orbit

A cubesat, largely built by undergraduate students and scheduled to launch on Sunday, will explore the feasibility of a new propulsion method that could enable very small satellites to move around Earth’s orbit without carrying fuel.

This could pave the way for tiny satellites that stay in orbit for long periods and operate in swarms, monitoring storms and natural disasters, for example.

A cubesat is about the size of a loaf of bread, designed to hitch a ride into space with a major mission. Cubesats are low-cost ways to test out new technologies or enable students to get hands-on experience with space exploration. MiTEE is scheduled to fly from the Mojave Air and Space Port on Virgin Orbit’s Launch Demo 2.

While Earth’s atmosphere is much thicker on the ground, a scattering of air particles stretch all the way up to low Earth orbit—the territory of about 60% of Earth-orbiting satellites. Small satellites are more strongly affected by the drag of the upper atmosphere than large satellites, slowing their orbits and causing them to drop toward the Earth.

“These smaller spacecraft just don’t last very long, maybe even days to weeks, or a few months, dependent upon how high they are,” said Brian Gilchrist, a professor of electrical engineering and computer science, who supervised the team.

And, unlike larger satellites, most small satellites can’t fight the drag. Propulsion is typically achieved by pushing something in the opposite direction of travel, but this means carrying extra material on the satellite that adds weight and is a limited resource. 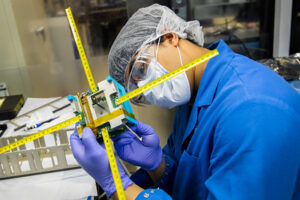 The team is studying the idea of tethering two cell phone-sized small satellites with a wire 10 to 30 meters long that is able to drive current in either direction using power from solar panels and closing the electrical circuit through the Earth’s ionosphere. When a wire conducts a current in a magnetic field, that magnetic field exerts a force on the wire. The team plans to use the force from the Earth’s magnetic field to climb higher in orbit, compensating for the drag of the atmosphere.

The first experiments to test the idea will be on a CubeSat satellite called MiTEE-1: The Miniature Tether Electrodynamics Experiment-1. The version being launched was designed and built by more than 250 students, over a course of six years. They were mentored by engineers and technicians of the U-M Space Physics Research Laboratory. The version launching now will have a deployable rigid boom, one meter long, between one satellite the size of a bread box and another the size of a large smartphone. It will measure how much current can be drawn from the ionosphere under different conditions. 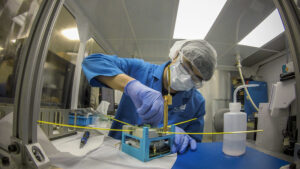 “It’s the first time MiTEE will launch a satellite, and it’s been a long time coming. I’m excited to finally see the result of years of effort,” Lauren Citkowski, an aerospace engineering senior.

In two-and-a-half years on the project, Citkowski is grateful for the experiences that built both her technical skills, such as soldering and assembling electronics, and the communication and interpersonal skills that will enable her to thrive on interdisciplinary engineering teams.

The MiTEE project continues at U-M, taking data from this satellite and planning the next. A future version with a longer tether between the satellites, 30 feet or more, would demonstrate that this form of electromagnetic propulsion could keep the device in orbit.

The MiTEE project participates in the Multidisciplinary Design Program, which helps match students from across the University with faculty research—from first year undergraduates to masters level students. Through MDP, the U-M College of Engineering also funds fellowships for students from low and middle income families, or who are in the first generation of the family to attend college. All students who participate in MDP gain hands-on experience in research and industry, preparing them for careers in engineering and space sciences.

Gilchrist is also a professor of climate and space sciences and engineering.