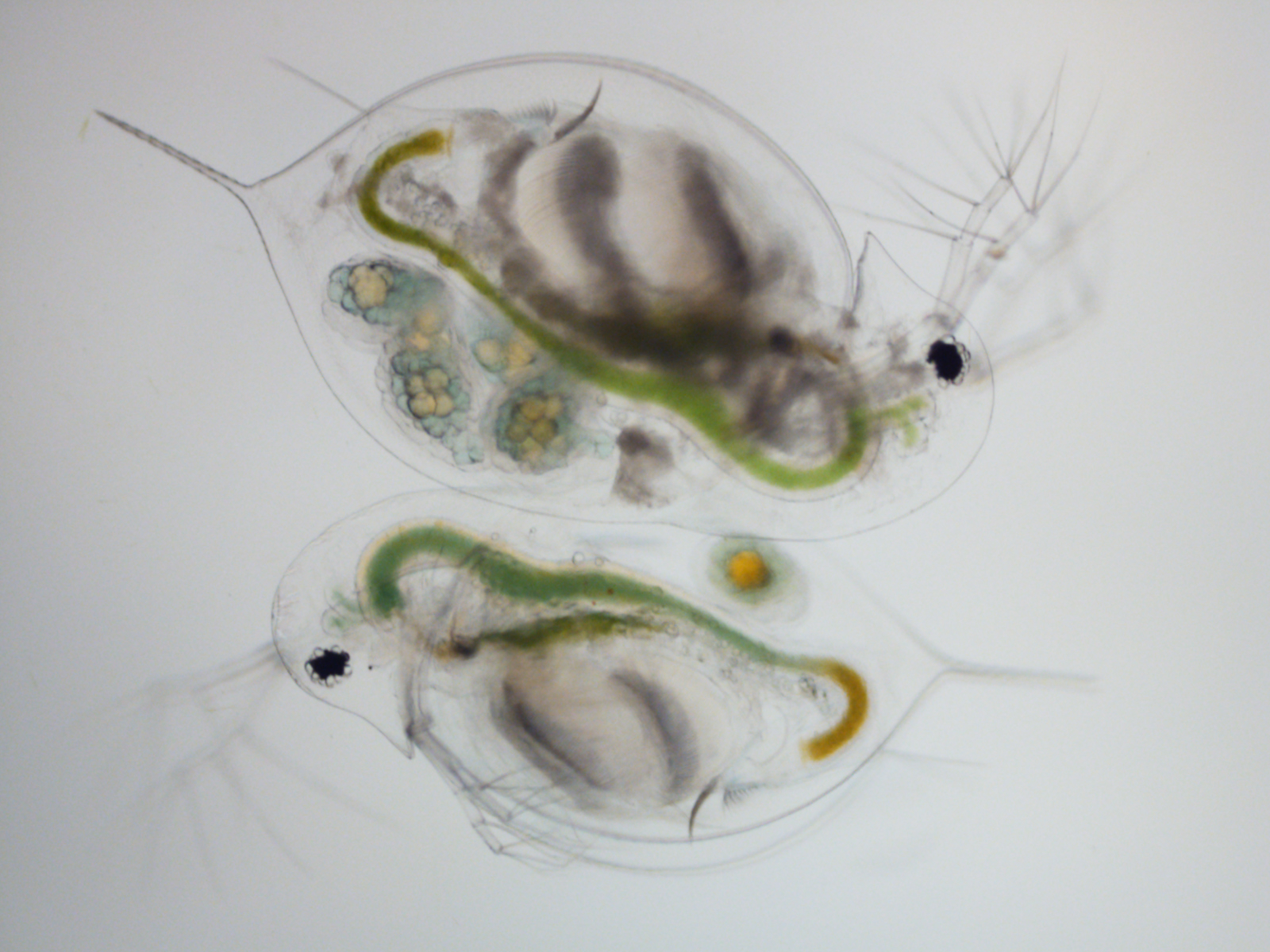 Microscope image of two Daphnia dentifera that fed on different diets and were exposed to a fungal pathogen. The top Daphnia fed on a nutritious green algae. She is larger and has several embryos in her brood chamber but is infected with a virulent fungal pathogen. The animal on the bottom fed on a toxic cyanobacterium. As a result, she is smaller and only has one developing embryo but is not infected with the pathogen (and, therefore, will live longer). Image credit: Meghan Duffy

ANN ARBOR—The cyanobacteria blooms that plague western Lake Erie each summer are both an unsightly nuisance and a potential public health hazard, producing liver toxins that can be harmful to humans and their pets.

But the toxins produced in cyanobacteria blooms may also have protective effects on sand-grain-sized lake animals that ingest them, much as the toxins in milkweed plants protect monarch butterflies from parasites, according to a new study from University of Michigan ecologists.

The U-M researchers plan follow-up studies to see if the protective effects they observed in the lab are also occurring in lakes. They’ll also explore the potential of developing anti-fungal drugs for human use.

The study is published online in the journal Proceedings of the Royal Society B. The first author is Kristel Sánchez, who did the work for her master’s thesis in the U-M Department of Ecology and Evolutionary Biology. Co-authors include her faculty advisers, U-M ecologists Mark Hunter and Meghan Duffy. 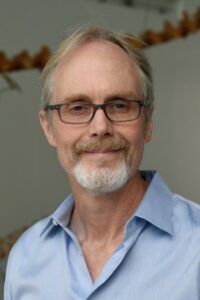 “This paper shows that Daphnia living in Michigan lakes can gain protection from fungal parasites through the toxins that are present in bloom-forming cyanobacteria,” said Hunter, who has studied monarchs at U-M’s Biological Station for more than a decade.

“This is an amazing aquatic parallel of the monarch butterflies, which gain protection from their parasites from the toxins in milkweed. It suggests that animal medication may be even more common than we thought, extending into the aquatic realm.”

It’s been known for decades that animals such as chimpanzees seek out medicinal herbs to treat their diseases. In recent years, the list of animal pharmacists has grown much longer, and it now appears that the practice of animal “self-medication” is a lot more widespread than scientists had previously known.

But most studies of animal self-medication have focused on terrestrial ecosystems. Relatively little is known about how an animal’s diet serves as sources of medications in aquatic systems.

But the current study does provide strong evidence for the protective properties of plant toxins consumed by Daphnia. 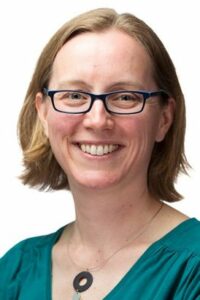 “Fungal pathogens have devastating impacts on crops, wildlife, and even people,” Duffy said. “To me, the idea that compounds for fighting those might be just below the surface of our local lakes is really exciting.”

Sánchez raised Daphnia dentifera, a common herbivore in North American lakes, in the laboratory and fed individuals one of eight species of green algae or cyanobacteria (formerly known as blue-green algae). In the wild, Daphnia feed on algae and bacteria floating in the water column; they are part of a group of tiny aquatic animals known as zooplankton grazers.

The lab-reared Daphnia in the U-M study were then exposed to one common fungal parasite and one common bacterial parasite. In the wild, Daphnia become infected by consuming parasite spores in the water.

The researchers found that diet had striking effects on the infection prevalence of the fungal parasite, but not the bacterial parasite.

Fungal infections were also completely prevented when Daphnia fed on the green alga Chlorella. In all, four of the nine dietary treatments showed strong evidence of anti-fungal activity.

The fact that nearly half of the diet treatments showed some sort of medicinal effect was really surprising and suggests that we are not paying enough attention to the mechanism of self-medication in aquatic ecosystems.
Kristel Sánchez

“I thought I would probably get one diet out of the nine that showed some medicinal effect,” Sánchez said. “The fact that nearly half of the diet treatments showed some sort of medicinal effect was really surprising and suggests that we are not paying enough attention to the mechanism of self-medication in aquatic ecosystems.”

In contrast, none of the diet treatments prevented infection with the bacterial parasite. Also, uninfected Daphnia that consumed a diet of green algae produced two- to three-fold more offspring than those that ate cyanobacteria, confirming the higher nutritional quality of the green algal diets. And, in general, growth was reduced by parasite infection.

Sánchez plans to continue the work for her doctoral research project, with Duffy as her adviser. The researchers will look for evidence of self-medication and will further examine the anti-microbial properties of the three toxins that showed fungal-fighting activity in the initial study: microcystin-LR, anatoxin-a, and chlorellin. Researchers from Minnesota and Georgia will join the project.

“A lot of natural products research is done by screening tons of plant or algal material and using different bioassays and hoping you get lucky and find a new compound or something that is active,” Sánchez said. “But why not look at what is happening already in nature? I think this is what really appealed to me and why I chose to work on this project.”

The work has broad ecological implications, the researchers say, in part because a warming global climate is expected to increase the frequency of cyanobacteria blooms in some regions. That change could alter disease dynamics among Daphnia, which in turn “could have important consequences for lake food webs, as Daphnia are key grazers and disease outbreaks within Daphnia populations can influence ecosystem-level processes,” the authors wrote.

The Proceedings of the Royal Society B paper is titled “Toxins or Medicines? Phytoplankton diets mediate host and parasite fitness in a freshwater system.” The other author, in addition to Sánchez, Duffy and Hunter, is former U-M undergraduate Naomi Huntley, who worked in Duffy’s lab.