Poll: Belief in global warming rebounds after period of decline 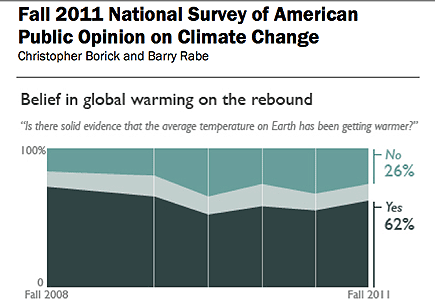 ANN ARBOR—The percentage of Americans who believe in global warming has reached the highest level since the fall of 2009, rebounding from a period of significant decline, a new survey reports.

A key factor influencing Americans’ views about global warming is their personal observations about the weather and temperature changes, according to the latest National Survey of American Public Opinion on Climate Change.

About half of Americans now point to their personal experiences as the main reasons they believe in global warming, the poll said.

This was the fourth year the survey was conducted by the Ford School of Public Policy at the University of Michigan and the Muhlenberg College Institute of Public Opinion.

When the initial survey was done in the fall of 2008, 72 percent of Americans said they believed there was solid evidence that average temperatures on Earth have been getting warmer over the past four decades.

Views about global warming continue to be split along party lines, with three out of four Democrats saying there’s solid evidence for climate change, the polls said. Republicans are almost evenly divided, with 47 percent agreeing there is evidence Earth is getting warmer and 42 percent contending there is not enough proof.

The telephone survey, conducted Dec. 4-21, 2011, involved calls to randomly selected households and cell phones throughout the U.S. The margin of error for the 887 completed surveys was 3.5 percentage points.

View the full report at the Brookings Institution website: http://www.brookings.edu/papers/2012/02_climate_change_rabe_borick.aspx