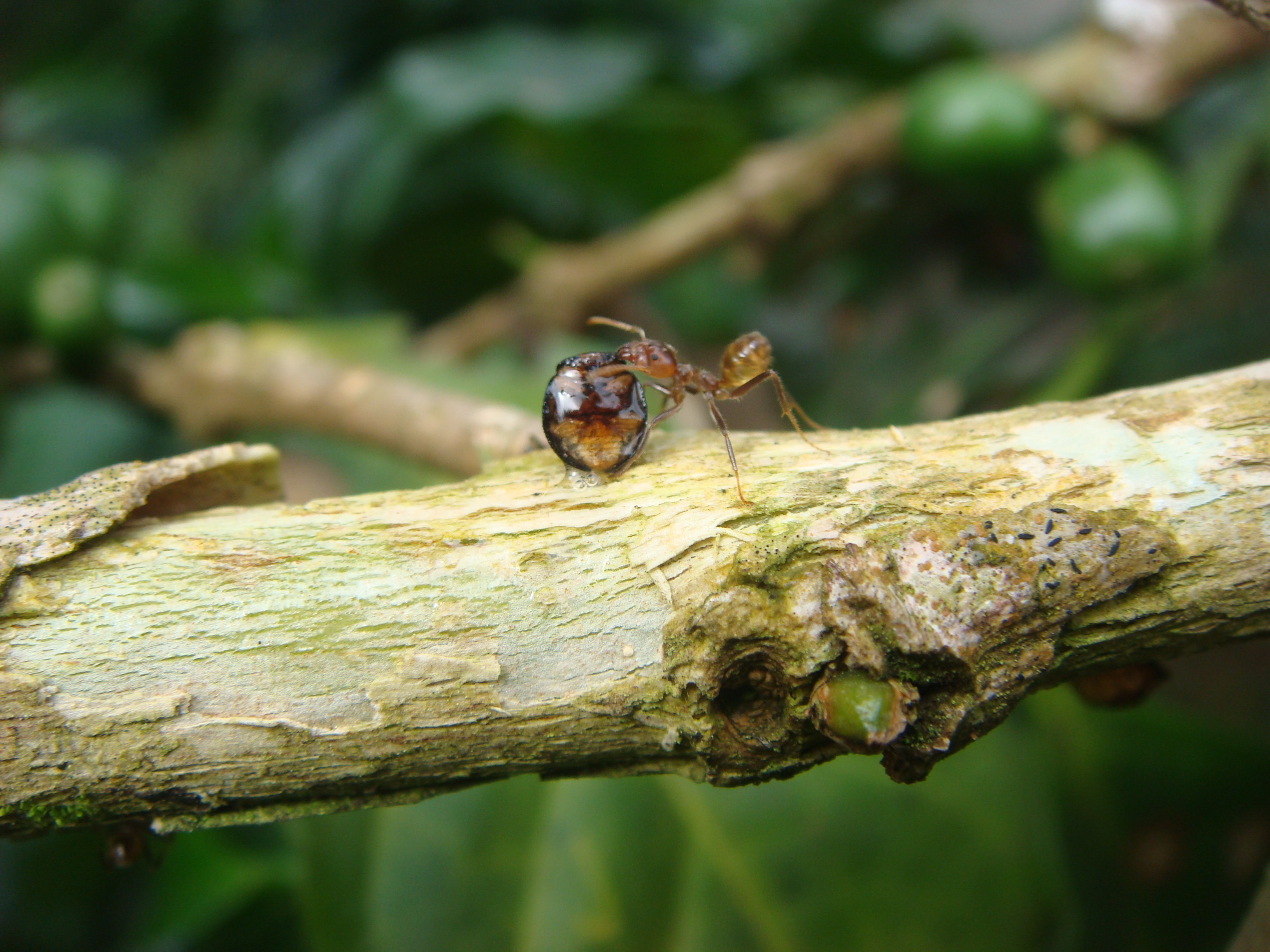 An Azteca ant grabbing an adult lady beetle on a coffee plant in Chiapas, Mexico. Lady beetles attempt to eat the green coffee scale insects guarded by the ants. But patrolling ants will attack and kill adult beetles and will remove beetle eggs laid on ant-tended coffee plants. Photo by Ivette PerfectoANN ARBOR—Predatory beetles can detect the unique alarm signal released by ants that are under attack by parasitic flies, and the beetles use those overheard conversations to guide their search for safe egg-laying sites on coffee bushes.

Azteca instabilis ants patrol coffee bushes and emit chemical alarm signals when they’re under attack by phorid flies. In an article published online July 27 in the journal Ecology and Evolution, University of Michigan researchers and their colleagues show that pregnant lady beetles intercept the ants’ alarm pheromones, which let the beetles know that it’s safe to deposit their eggs.

The findings, which may have practical implications for pest management on coffee plantations, are the first documentation of a complex cascade of interactions mediated by ant pheromones, according to the authors.

“It is too often the case that pest management in agriculture focuses on finding a magic bullet solution to every problem,” said U-M ecologist Ivette Perfecto, professor at the U-M School of Natural Resources and Environment and co-author of the Ecology and Evolution paper.

An Azteca ant drives away a lady beetle on a coffee plant in Mexico. Patrolling ants will attack and kill adult beetles in order to protect green coffee scale insects. Video by Hsun-Yi Hsieh

First author of the paper is Hsun-Yi Hsieh, a graduate student at the School of Natural Resources and Environment.

“This research shows that there are very complex ecological interactions that are involved in population regulation, and when the population of concern is a potential pest species, understanding those interactions is key to the long-term sustainability of pest control strategies,” Perfecto said.

Ants and other social insects communicate using chemicals called pheromones. Little is known about insects and other creatures that exploit ant chemical communication systems. A few such cases have been reported, including ant-eating spiders that use ant alarm pheromones to find their prey and parasitic flies that use ant alarm or trail pheromones to find their host. 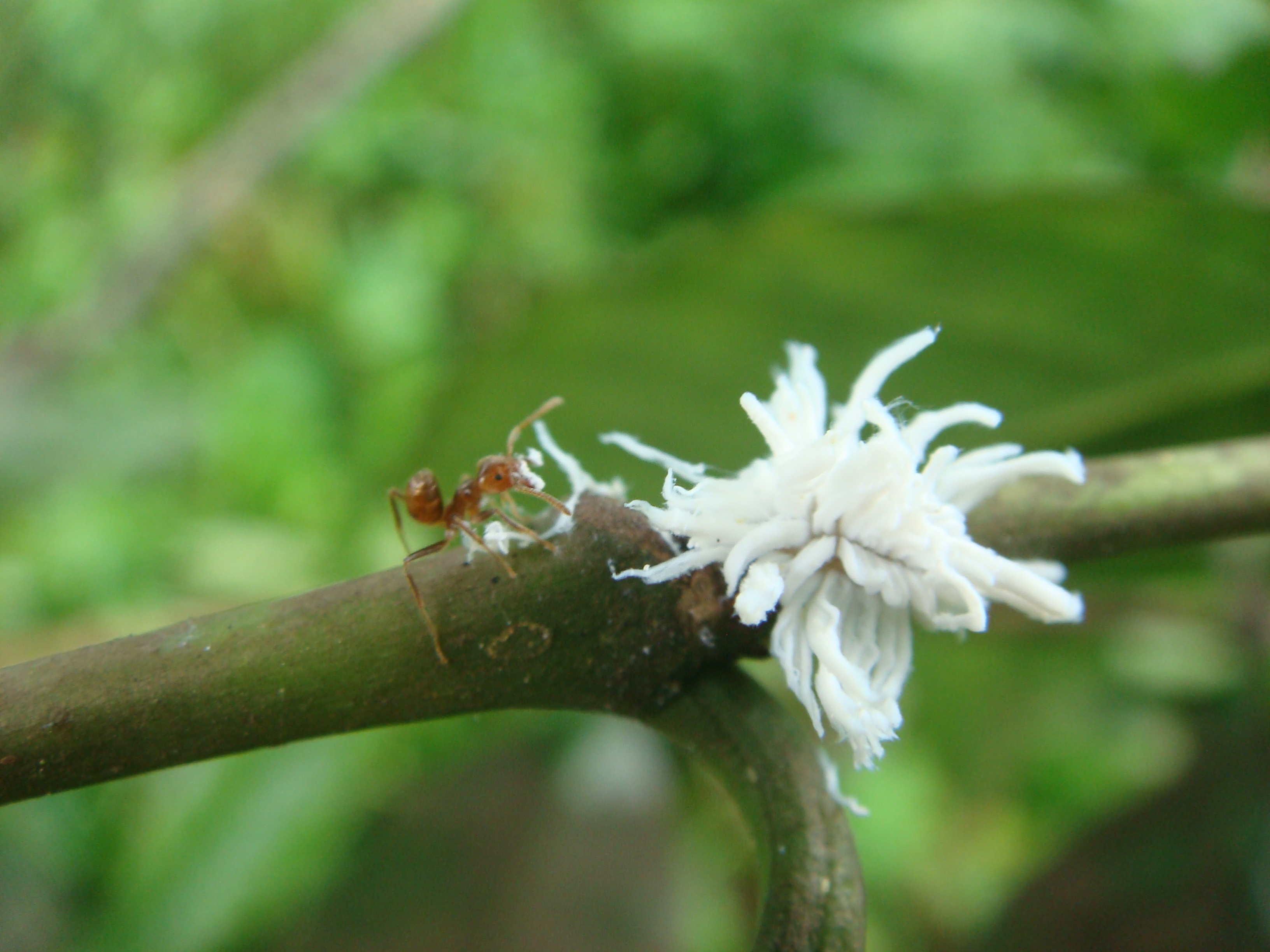 An Azteca ant attacking the larvae of a lady beetle on a coffee plant in Mexico. Lady beetle larvae are covered with waxy white filaments that protect them from ant attacks. Photo by Ivette PerfectoBut complex relationships involving ant pheromone-mediated interactions between multiple species of insects have not been previously reported, according to Perfecto.

The lady beetle eats the scale insects tended by the ants. However, patrolling ants attack and kill adult beetles and remove all beetle eggs laid bare on ant-tended coffee plants.

To get their offspring into food-rich patches among the scale insects, female lady beetles hide their eggs in out-of-the-way places—including the underside of the flat-bodied scale insects. That way, when the beetle eggs hatch they can start eating scale insects immediately, while still being protected from ant predation. A short time later, lady beetle larvae develop a waxy, filamentous coat that offers further protection from ants.

Phorids are a family of small, hump-backed flies resembling fruit flies. The parasitic phorid flies that attack Azteca ants lay their eggs on the ant’s body. Fly larvae develop inside the ant’s head, which falls off when the adult fly emerges. Phorids need to see movement to detect individual ants; therefore moving ants, rather than stationary ones, are their targets. 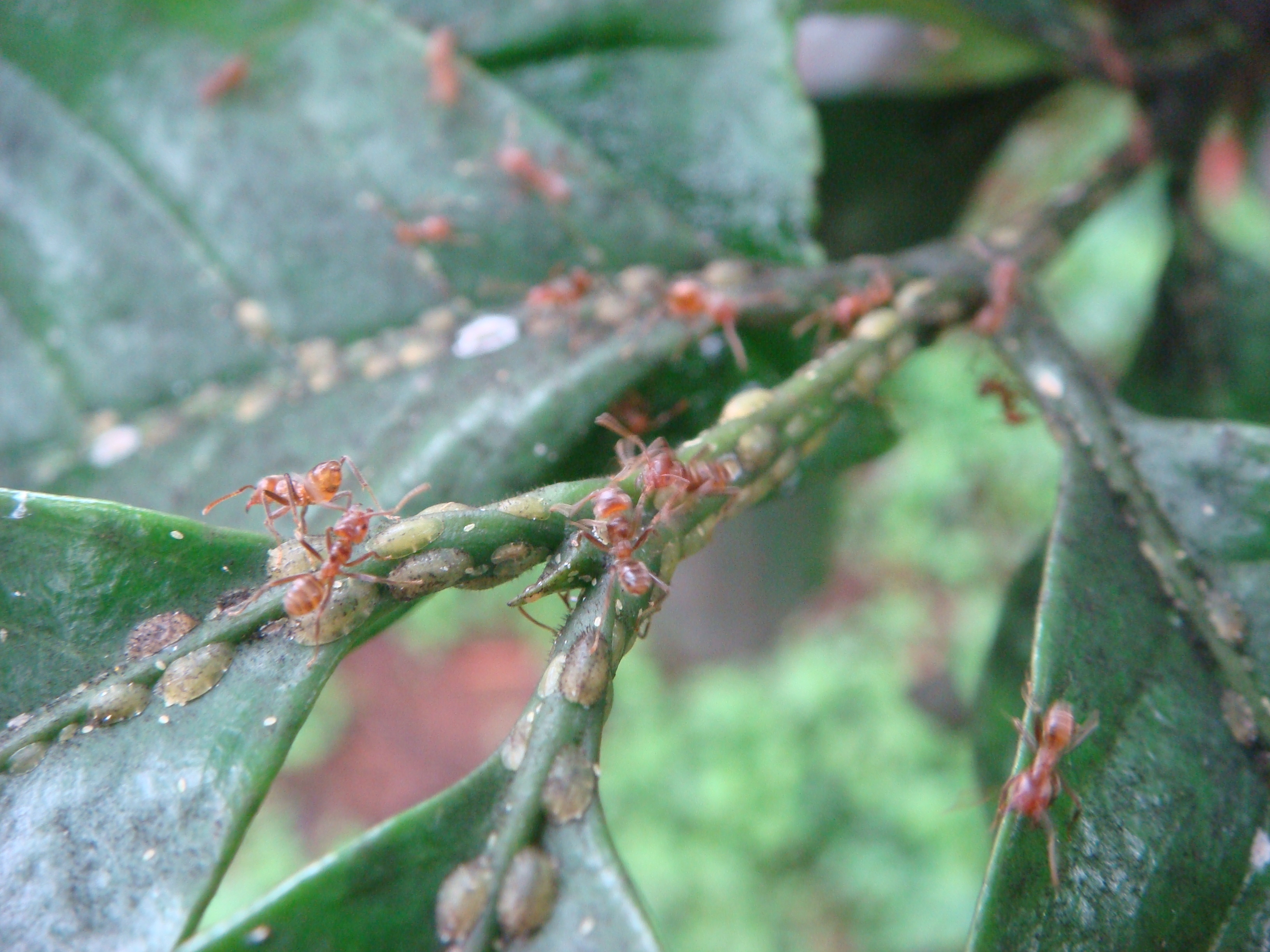 Azteca ants guarding green coffee scale insects. The scale insects are the brownish-green ovals attached to the coffee leaves and stems. Azteca ants enjoy a mutualistic relationship with the green coffee scale, which is a coffee pest. The ants protect the scale insects from predators and parasites and in return collect honeydew, a sweet, sticky liquid secreted by the green coffee scale. Photo by Ivette PerfectoNeedless to say, the ants do their best to avoid becoming phorid-fly victims. When the flies attack, the ants release a phorid-alert pheromone to warn other workers in the vicinity. In response, nearby ants enter a motionless, catatonic state and overall colony activity declines by at least 50 percent. This effect can last up to two hours.

In the Ecology and Evolution paper, Hsieh, Perfecto and their colleagues show that female lady beetles—especially pregnant ones—detect the phorid-alert pheromone and take advantage of the ensuing lull in activity to search out safe egg-deposition sites with plenty of food for their offspring. Interestingly, male beetles did not respond to any of the ant pheromones.

For the study, beetles, ants and phorid flies were collected from an organic coffee plantation in the southern part of the state of Chiapas, Mexico, or were reared in the laboratory after field collection from the same site. The insects were placed in a multi-chambered apparatus called an olfactometer, which is used to measure an organism’s sensitivity to various odors.

In addition to several olfactometer tests, an egg-deposition experiment was conducted. Pregnant lady beetles were placed in a one-liter container holding a coffee branch with four to six leaves infected with scale insects, 40 Azteca worker ants, and two or three phorid flies. After 24 hours, the coffee branch was removed and examined under a microscope for beetle eggs.

Results of the various tests support the hypothesis that female beetles use the phorid-alert ant pheromone to exploit low ant-activity periods and to locate sites where eggs can be hidden and protected against ant predation after ants resume their normal activity levels. 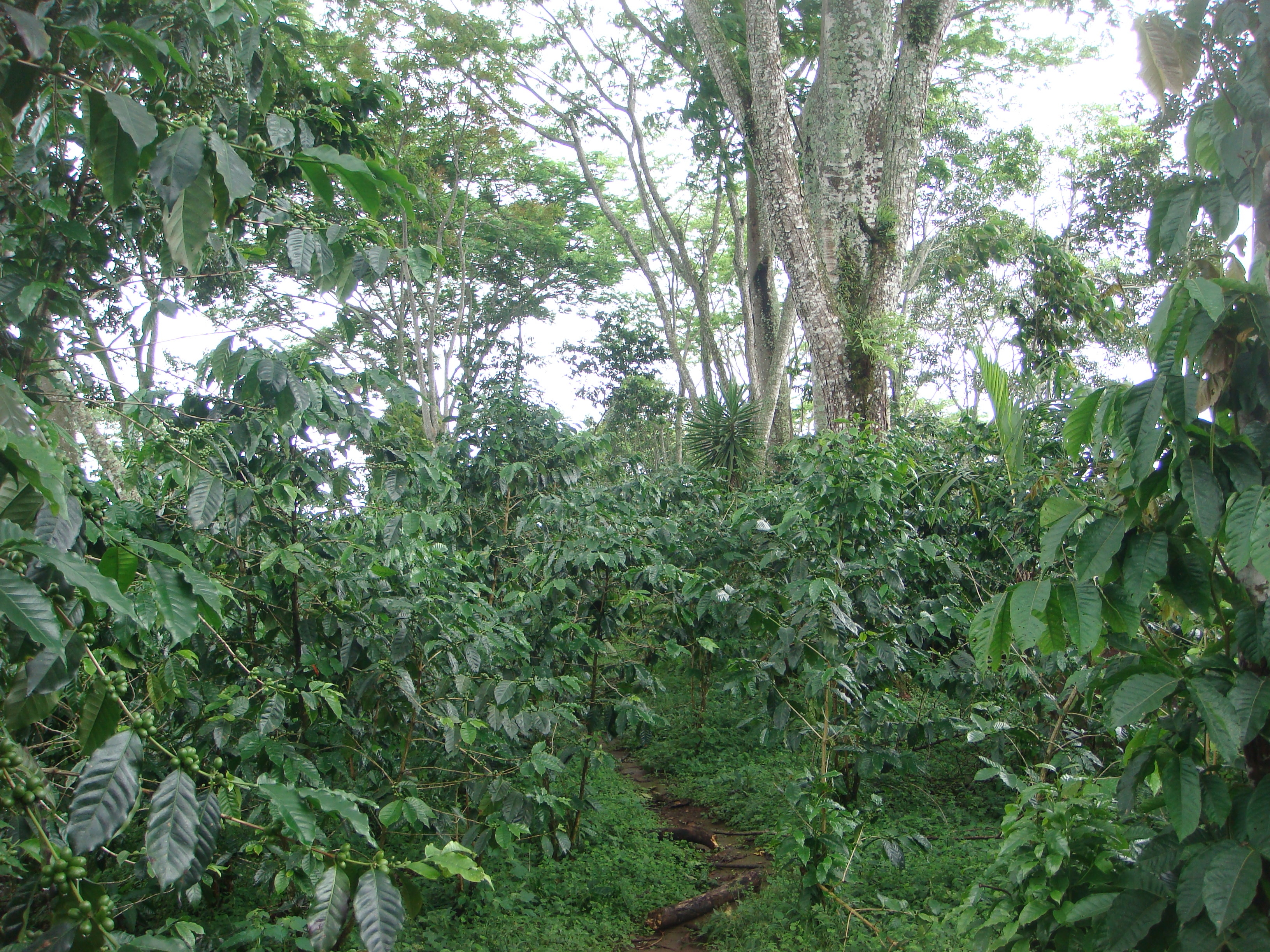 A coffee plantation in Chiapas, Mexico. Photo by Ivette PerfectoThe authors suggest that such complex interactions may be common in nature, “and their uncommon occurrence in the literature is the product of investigators failing to search for them in the first place.”

The results have important implications for the management of the scale insect on coffee plantations. The findings suggest that the conservation of Azteca ants, rather than their elimination, is the best management option, Perfecto said.

“This is counterintuitive because the ants protect the scale insects,” Perfecto said. “However, the ants are distributed in a patchwork on the plantations, and the patches of Azteca are essential for the survival and reproduction of the predatory lady beetle.”

The patches of Azteca, which cover 3 to 5 percent of the plantation area, act as a source of adult lady beetles, which can help control the scale insects on the rest of the plantation. Since the Azteca ants nest in trees that are planted alongside the coffee for shade, eliminating these shade trees can result in the elimination of one of the most important predators of the scale insects, Perfecto said.

In addition to Hsieh and Perfecto, authors of the Ecology and Evolution paper are Heidi Liere of the University of Wisconsin and Esteli Soto Jiménez of the Universidad Autónoma de Chapingo in Mexico. Funding for the work was provided by the National Science Foundation and U-M’s Rackham Graduate School.