ANN ARBOR—Underwater archaeologists have discovered evidence of prehistoric caribou hunts that provide unprecedented insight into the social and seasonal organization of early peoples in the Great Lakes region.

An article detailing the discovery of a 9,000-year-old caribou hunting drive lane under Lake Huron appears in today’s issue of the Proceedings of the National Academy of Sciences.

“This site and its associated artifacts, along with environmental and simulation studies, suggest that Late Paleoindian/Early Archaic caribou hunters employed distinctly different seasonal approaches,” said John O’Shea, the Emerson F. Greenman Professor of Anthropological Archaeology at the University of Michigan and lead author of the article. 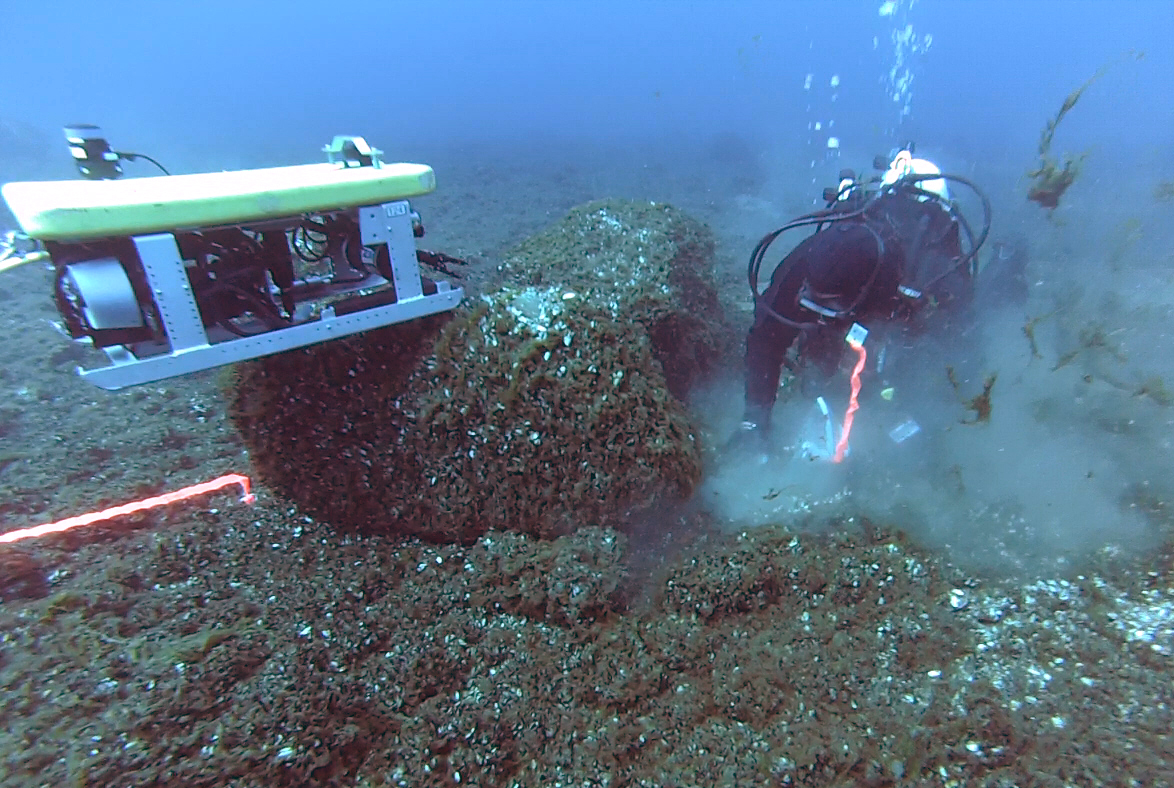 According to O’Shea, who is also Curator of U-M’s Great Lakes Division of the Museum of Anthropological Archaeology, the site was discovered on the Alpena-Amberley Ridge, under 121 feet of water, about 35 miles southeast of Alpena, Mich., on what was once a dry land corridor connecting northeast Michigan to southern Ontario.

The main feature, called Drop 45 Drive Lane, is the most complex hunting structure found to date beneath the Great Lakes. Constructed on level limestone bedrock, the stone lane is comprised of two parallel lines of stones leading toward a cul-de-sac formed by the natural cobble pavement. Three circular hunting blinds are built into the stone lines, with additional stone alignments that may have served as blinds and obstructions for corralling caribou.

Although autumn was the preferred hunting season for caribou, the orientation of Drop 45 shows that it would only have been effective if the animals were moving in a northwesterly direction, which they would have done during the spring migration from modern day Ontario.

“It is noteworthy that V-shaped hunting blinds located upslope from Drop 45 are oriented to intercept animals moving to the southeast in the autumn,” O’Shea said. “This concentration of differing types of hunting structures associated with alternative seasons of migration is consistent with caribou herd movement simulation data indicating that the area was a convergence point along different migration routes, where the landform tended to compress the animals in both the spring and autumn.”

The structures in and around Drop 45, and the chipped stone debris for repairing stone tools, provide unambiguous evidence for intentional human construction and use of the feature, O’Shea said. And they also provide important insight into the social and economic organization of the ancient hunters using this area.

“The larger size and multiple parts of the complex drive lanes would have necessitated a larger cooperating group of individuals involved in the hunt,” he said. “The smaller V-shaped hunting blinds could be operated by very small family groups relying on the natural shape of the landform to channel caribou towards them.”

Co-authors of the article are Ashley Lemke and Elizabeth Sonnenburg of U-M, Robert Reynolds of Wayne State University and Brian Abbot of Nautilus Marine Group International.