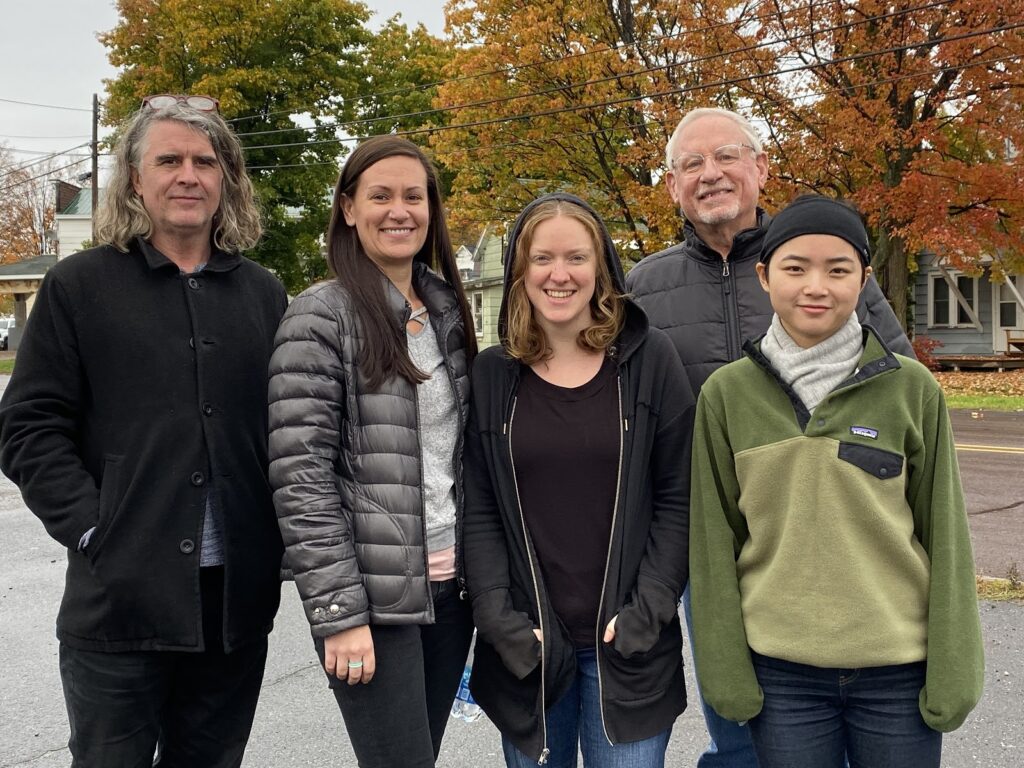 ANN ARBOR—About 40 University of Michigan volunteers drove 3,800 miles to 26 prisons in Michigan in search of the best works of art created by prisoners.

With precise logistics and rigorous rules, the curators from U-M’s Prison Creative Arts Project began their annual prison arts selection tour in October, along with U-M students, staff, faculty, community members and local artists—three of whom are former incarcerated artists.

In all, some 660 prison inmates created about 2,000 pieces of art—more than 800 of which will be featured in one of the largest prison exhibitions in the world, the 25th annual Exhibition of Art by Michigan Prisoners in March. 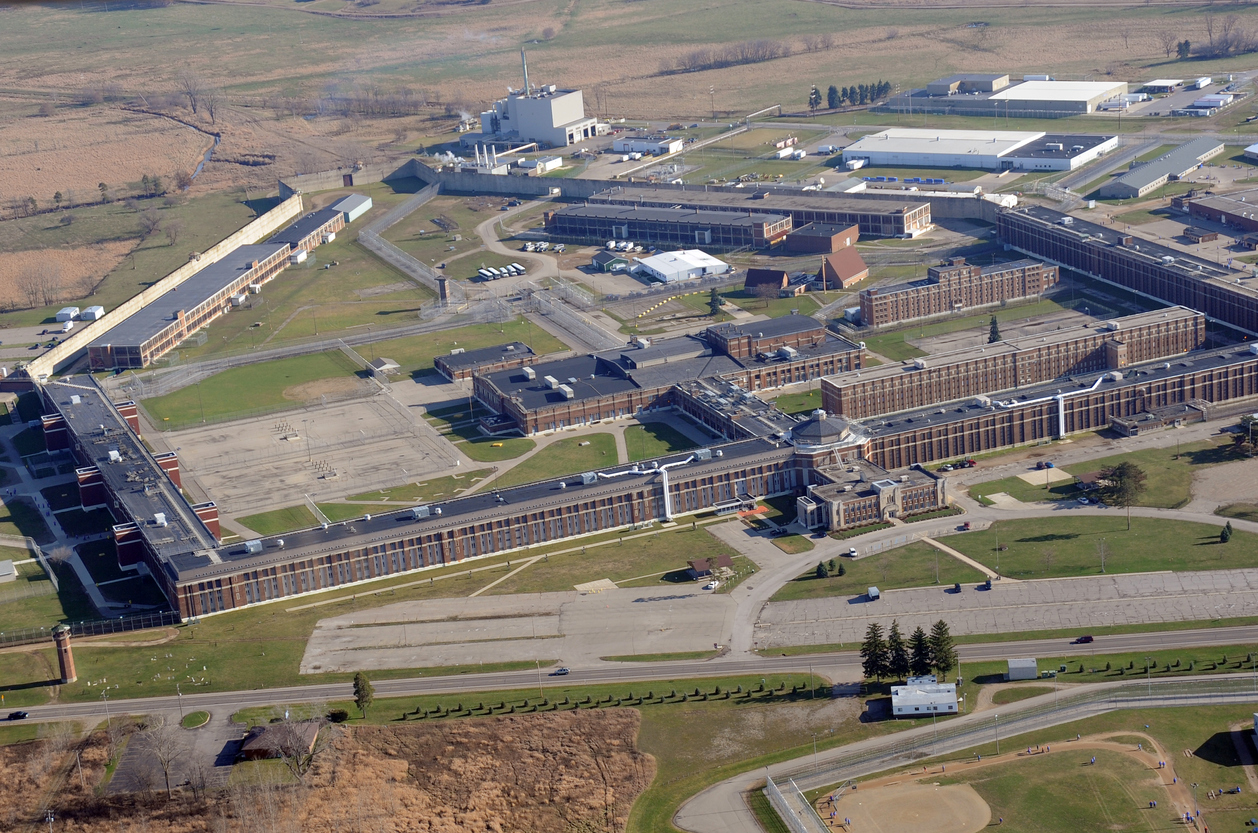 In the Baraga Maximum Facility, the curatorial process took place through glass partitions. Four plastic chairs stood vacant in separate booths. Telephones next to them were idle until guards brought each artist, carrying their art, into the small booths.

In those restricted environments, artists are only allowed to use extremely limited art supplies, aside from black ink pens and standard U.S. letter paper, to fashion their pieces.

That is why “The Sitting Duck,” created by maximum security artist Paul M., was such a surprise. The vibrant colors of his artwork, approximately 3′ x 5′, were created using yellow, green, brown and blue color pencils.

“Everybody here knows how important art is to me. So when I was sent to Level V security, I was allowed to bring my big roll of paper, my black ink pen and colored pencils from Level I,” he said. “The arts made me grow.”

The curators unanimously picked his piece.

“I think they do a fantastic job, using the media available to them, to express who they are and also tell the story they wanted to tell,” said Jessie Zhou, a graduate student at the U-M School of Information.

“I felt privileged to be able to engage with those individuals, especially the ones in maximum security levels. Because if you don’t go in, you don’t get to hear those stories directly from them. There was fear, there was curiosity. It was, for sure, an experience I will remember for the rest of my life.” 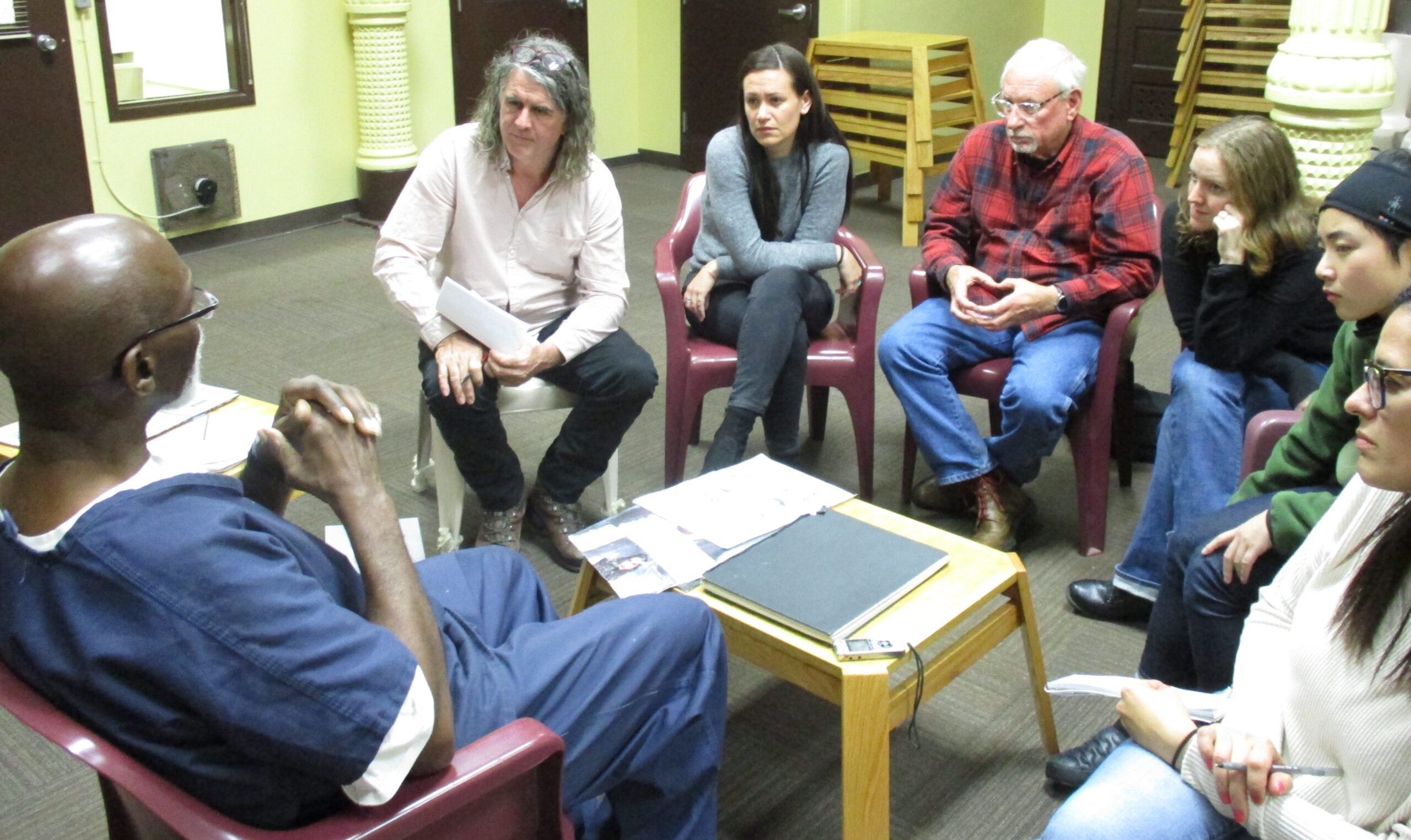 During the art selection processes, the curators and volunteers request to talk directly with the incarcerated artists, analyze their pieces, give them feedback and select which works will be displayed, considering the audience, budget and gallery space.

The artists from the maximum security unit in the Marquette Branch Prison presented their art not through glass partitions but from behind a chain-link fence. Most of them worked with only a segregation pen, a flexible pen issued by the state.

“I am always so impressed with what the artists bring to share—and always so enlivened by what they have to say,” said Graham Hamilton, PCAP arts programming coordinator. “The art selection season has become a highlight of my career.” 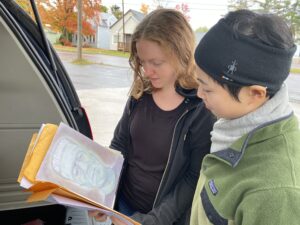 Megan Wilson, a doctoral student in classical studies, went on six art selection trips this season, and said that the value of the feedback curators give to the incarcerated artists during these visits cannot be overstated.

“They are there to listen to you,” she said. “It’s really valuable to hear somebody else’s perspective on the things that you’re doing well and the things that you can work on, because most of them are going to go back and make something new. They’re going to keep drawing or painting. That’s why I think that the feedback we give is, in some ways, more important than the decision.” 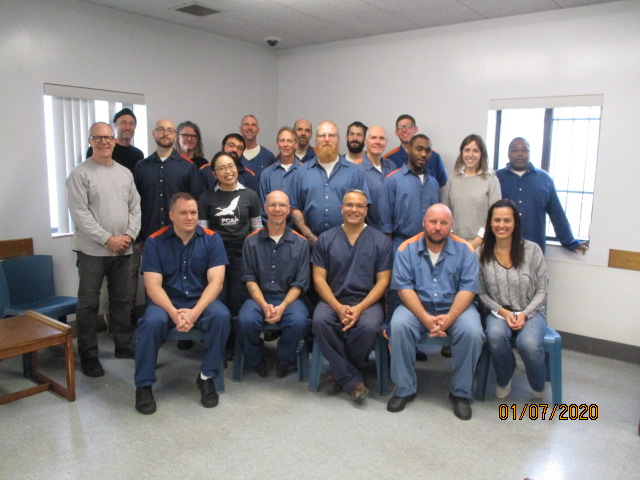 Incarcerated artists gathered together in the conference room at the Cooper Street Facility in Jackson.

The men in blue-and-orange corrections uniforms gathered together in the visiting room at the Cooper Street Correctional Facility in Jackson. Suspense and expectation were in the air, and an art war between two of them was about to begin.

Bruce J. brought 12 pieces of art for this year’s curatorial process and Daryl R., 10. Even though they live in the same correctional facility and see each other on a daily basis, it was the first time they would look at each other’s work.

“I am always anxious to see what June will bring in. This is a healthy competition but I always work very hard to beat him,” Daryl R. said. “It has been a great rivalry for the last three years, an extra motivation to extend my skills.”

Bruce J. has been painting for about eight years and is a mentor for the artists at Cooper Street.

“Painting is my escape. I try to give some guidance to all prisoners who have an interest in art, so they can feel this same freedom,” he said. “Daryl’s work is amazing. I appreciate his details with lighting. He is very talented and I can say he really grew as an artist in the last few years.”

After the curators’ review, it was a tie. Both prisoners had two pieces selected for the PCAP annual art show.

“It is really rewarding to have your pieces selected,” Daryl R. said. “I want to make my mom proud. I use art as an attempt to correct the mistakes of the past. I simply hope one day to make it right.” 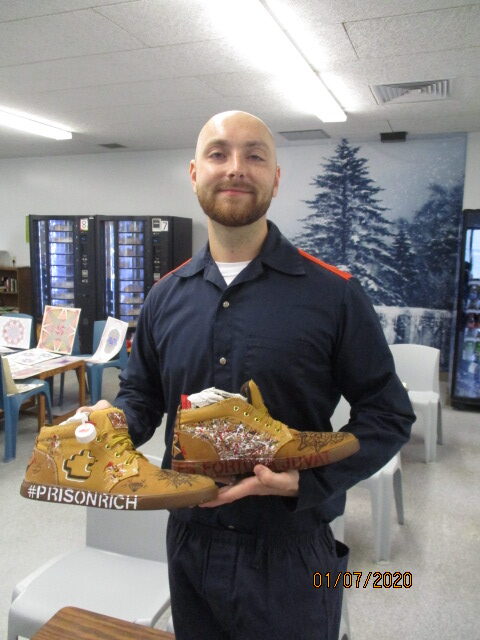 PCAP’s curators also selected 20 other pieces from Cooper Street artists. Steven H.’s work, “Prison Rich,” was an easy and quick pick. With a heavy graffiti influence and touches of classic tattoo, he created a 3D artwork, using a pair of shoes, acrylic ink, thread and a plastic cable tie.

“I wanted to create something provocative, to start a dialogue about mass incarceration and the lack of richness in anything with the absence of freedom,” he said. “Inside (prison) we are just treated like numbers. When we move facilities, they put all our possessions in a green duffel bag with a plastic cable tie and our inmate number. This relocation process is portrayed in my art.”

U-M senior student Hannah Agnew has been a PCAPer since she was a freshman and went on three art selection trips this season.

“I am always completely baffled by the utter talent and resilience that the artists inside have,” she said. “Prisons are incredibly dehumanizing and difficult spaces where folks are constantly reminded that they do not have a right to their own freedom. But despite this, I met so many inspiring artists that did not allow the prison to define them and were able to maintain some agency through their art.”

Vincent Mountain, U-M professor of theatre and drama, became involved with PCAP in 2017 and has no plans to stop. This year, he went on six selection trips and will also help install the 25th show.

“I love to talk about art, and if I, by talking with an inmate, artist to artist and human to human, I can celebrate their work and hear their stories, I figure it is the least I can do,” he said.

From the entryway, it looked like a big, traditional art fair. Tables were aligned in rows, with more than 80 artists behind them presenting hundreds of art pieces, a record number of participation.

But their voices were lower, their enthusiasm was restrained and many of them kept their heads down. They were all incarcerated artists from the Women’s Huron Valley Correctional Facility in Ypsilanti, the only women’s prison in Michigan.

The atmosphere became more relaxed and cheerful when the nine PCAP curators started walking through the aisles, greeting the prisoners and asking questions. With shiny eyes, Susan B., who has been incarcerated for 17 years, started talking about one of her pieces, “Bob, the Redeemer.”

Using tissue paper and 347,929 beads, glued one at a time, she created the 3D sculpture, which analogizes the bucks killed in Michigan every year and the prisoners in Michigan facilities.

“Art is giving me a purpose. Through it, I have been learning how to deal with conflict, that is part of life, in a healthy and productive way,” she said. “Each piece that gets selected gives me hope that someone will be touched by my creations.”

Part of PCAP show for the eighth year in a row, Samantha B., also known as the “crochet lady,” created the “See No Evil, Hear No Evil, Speak No Evil” piece. Instead of the wise monkeys, she used yarn to create a handicraft skull trio.

“I find so much joy in putting paint to canvas and creating one-of-a-kind crochet pieces,” she said. “I want my family to be proud of the woman I’ve become even though I’ve been through terrible situations and I am stuck in this place. I use art as a way to express and challenge myself.”

Majoring in art history and museum studies, U-M student Sophia Layton said she is fascinated by the thematic congruities among the prisoners’ work. 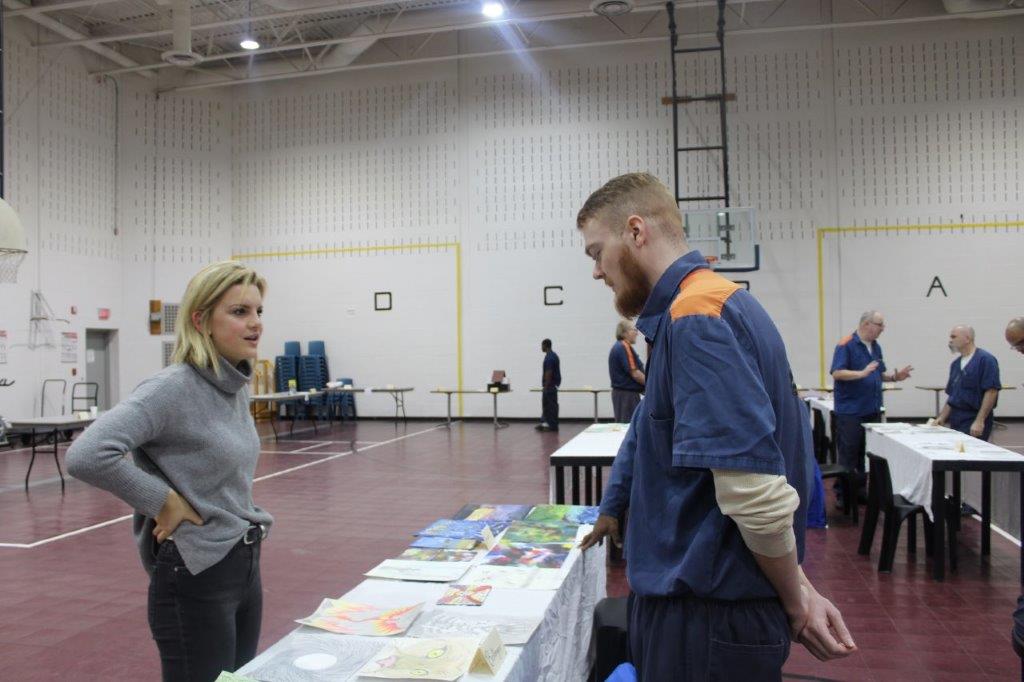 “The body of work that we take with us represents intense creativity, dedication, inquiry, and a spectrum of emotions,” she said. “Many of them paint scenes of places far away, often places they haven’t been to. Many create referencing their religion, they make art as an act of salvation. Others create to enhance their craft, learn art as a profession, make gifts for family, or just fill the time.”

After becoming a curator for the annual show and a member of the PCAP community, Layton said she wants to use art to magnify the voices of those who might otherwise be overlooked in the art world.

“I can’t fathom the intricacies of the hardships that happen in prison and all I know is who I’m talking to is who they are on that day, not their crime, not a menace, but an artist,” she said.

For the last few years, recreation director Brad Budzynski of Parnall Correctional Facility in Jackson has watched a growing level of commitment from incarcerated artists.

“This gives these guys something to look forward to every year. It’s keeping them doing something positive and out of trouble,” he said. “They put a lot of hard work and dedication into it. It’s not just a simple image. They totally put their hearts into these projects.”

All forms of arts 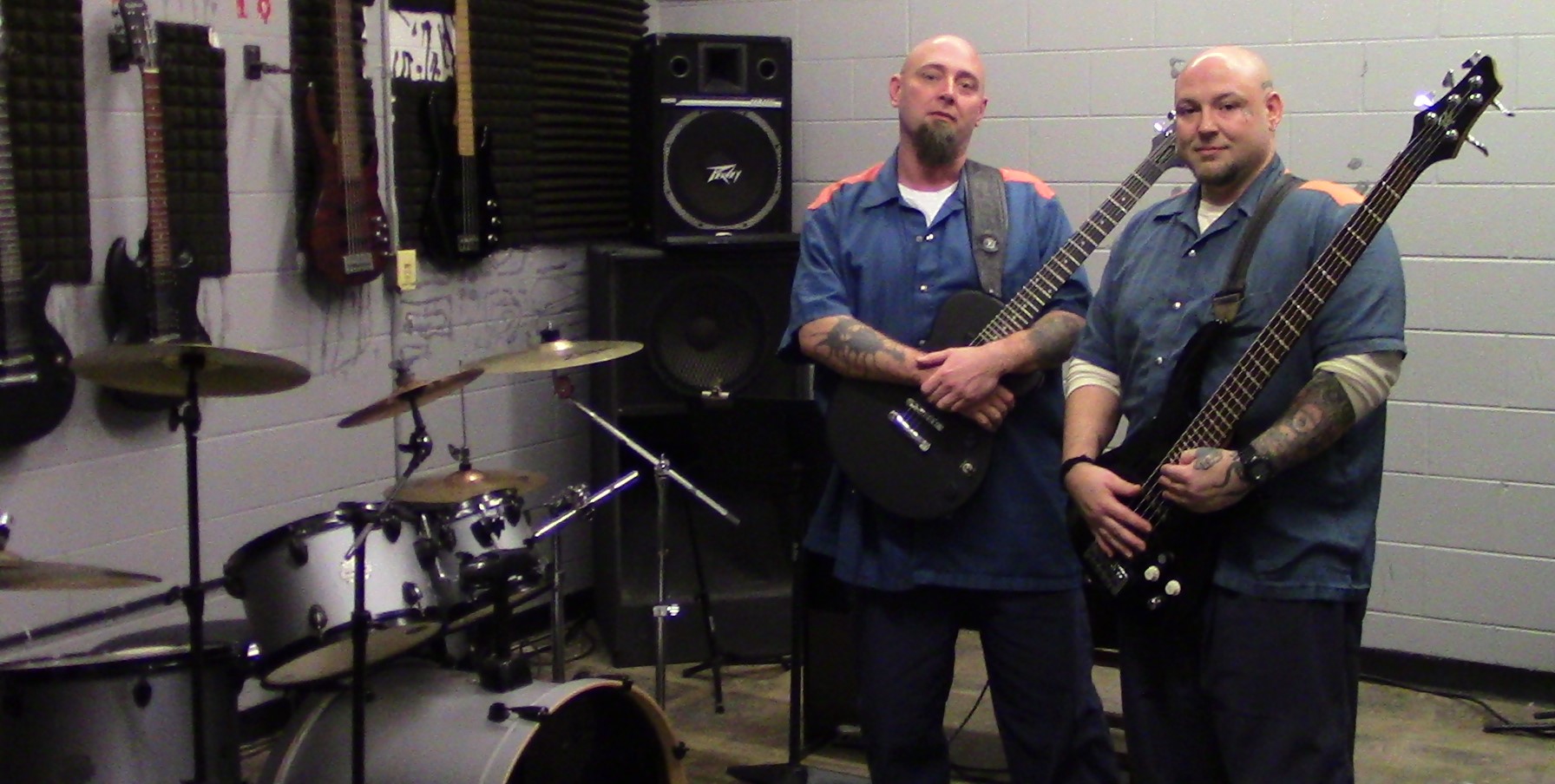 Incarcerated artists Matthew L. and Jason H. said the arts, through creative expression and discipline, are encouraging and helping them cope with incarceration.

Incarcerated artists Matthew L. and Jason H. are longtime friends and have been locked up at Parnall since 2008. The arts, through creative expression and discipline, are encouraging and helping them cope with incarceration, they said.

“Art gives us a means to show we have other talents and abilities. That we’re not just the numbers on our backs,” Jason H. said. “We’re more than the mistakes that brought us here. Art gives us a really expressive way to show who we are and not just what we’ve done.”

For Matthew L., “theater, music or drawing, a painting, portrait, dance, or any form of expressionism can transform them from a prisoner over to a human being.”

“Through our pain and suffering, we can paint a picture you will fall in love with. With our tears, we write a poem that can inspire and in our moments of sorrow, we will tell you a story of strength,” he said. “The arts can teach us love, remorse, empathy and helps us discover mercy, a greater love, inspiration, strength and a way to find our voice.”