Some of Sudan’s biggest protests in decades are demanding that President Omar al-Bashir step down. Last month, the president dissolved the government and declared a national state of emergency. 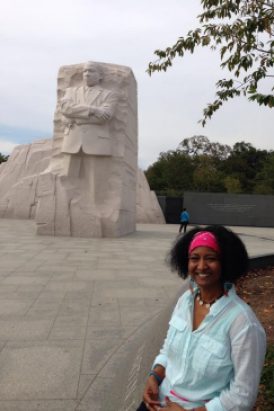 Amal Hassan Fadlalla is an associate professor of anthropology, women’s studies, and Afroamerican and African studies at the University of Michigan. Her research interests focus on global issues and perspectives related to diaspora, transnationalism, human rights and humanitarianism. She explains the situation in Sudan.

Sudan has erupted in protests since December. What has led to the protests?

Fadlalla: Sudanese are protesting against the current regime due to increasing prices of food and fuel. These recent economic crises can be traced back to the separation of the country into two nation-states in 2011: Sudan and South Sudan. Before this split, the regime mitigated these economic crises by using oil revenue from the south, which the country lost after the separation.

After that, the government relied on stringent liberal economic measures of privatization, suggested by international lenders that removed subsidies and defunded many vital public sectors in the country. Although the recent protests began to protest these failed economic policies, they also challenge the political orientation of the regime, mainly its religious overtones and its repressive and exclusionary politics towards its opponents and critics.

President al-Bashir has been in power for almost 30 years. What are the likely scenarios this protest might take?

Fadlalla: There are many scenarios floating around. Among them is that the military may step in and prepare the country for a transitional transfer of power, mimicking old scenarios that took place in 1964 and 1985. But it hasn’t happened and people are giving up on it because of the assumption that the military is a tool in the hands of the regime.

Another scenario is that the president may be pressured by international parties, e.g., European countries, the UN, African Union and human rights organizations to step down or allow for inclusion of all opposition parties to engage in national dialogue—one that would lead to a peaceful democratic transition.

None of these scenarios seem possible, especially because these protests are not well covered by leading international media to make it a priority for international intervention, unlike the coverage that the Darfur crisis received in the U.S., for instance.

Have there been earlier protests? Is this moment significant?

Fadlalla: I have to emphasize here that these protests are not new. Sudan is well known for two revolutionary movements that toppled two military dictatorships in the past: the October revolution of 1964 and April revolution of 1985. The two revolutions—led by trade unions, students and women’s organizations—were so massive that the military stepped in and prepared the country for multiparty democratic transitions.

Unfortunately, the short-lived democratic governments were disrupted by military coup d’états. In 1969, President Gaafar Nimeiry took power, and in 1989, President Omar Hassan al-Bashir took power through another military coup backed by the rising Islamist movement in the Sudan and the Muslim world. During the 30 years of the al-Bashir regime, however, many events have taken place. The southern Sudanese resistance movement, which was an ally to many opposition parties, is gone with the south. Darfur conflict erupted in 2003 and added to the fragmentation of the political resistance.

Many say that the Islamists succeeded in turning the military from a national institution into an ally with the Islamists. All of these changes reflect in this moment. Although these protests are so massive and so new, the resolution of the confrontation between the government and protesters is taking so long (almost 63 days to date). A strong professional union, comprised of doctors, teachers, students and civil society organizations that mirrors old alliances of trade unions and other organizations, emerged in January and is now leading the protests, demanding the dismantling of the regime power structure.

What is the role of diaspora in these protests?

Fadlalla: In my recent book, “Branding Humanity: Competing Narratives of Rights, Violence, and Global Citizenship,” I talked about how the diaspora has long been part and parcel of these contestations of the current regime. In fact, many decades of ethnic conflicts in the Sudan and crackdown on opposition parties have led to massive migration of Sudanese to many countries in the world, including to Europe and the United States.

Many secular and liberal activists in the diaspora have been in close contact with their counterparts in Sudan through social media and other media. Unlike old protests, the diaspora is more visible in these new revolts. In fact after the eruptions of the new protests in early December 2018, many Sudanese activists around the world began to protest and lend support to their counterparts in the Sudan. On Saturday, February 16, 2019, for instance, Washington, D.C., witnessed unprecedented massive demonstrations by Sudanese-Americans, who came in large numbers from different states to make their voice heard and to support their counterparts in the Sudan.

During a demonstration in London in December, two Sudanese women had a powerful chant that became a call for the protestors all over Sudan and in the diaspora. The chant, “Tasuqt bas,” which can be translated as “Enough, the regime must go,” became very popular because it relies on the power of day-to-day succinct spoken Sudanese collegial Arabic. Though chanting from London, these activists brought the intimacy of language to connect between those who are protesting in the Sudan and those who are dispersed from it, making distance and physical borders disappear.