Regardless of political or partisan stripes, few voters see the November election as anything less than consequential. And whether one advocates for a go-it-alone or go-with-friends approach to global relations, the world still carefully watches the United States. That’s especially the case in a time of COVID-19, the coronavirus that has now reached President Donald Trump and several people close to him. 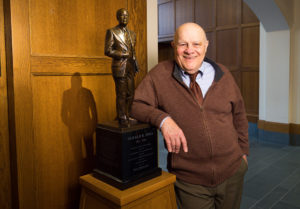 Melvyn Levitsky, a professor of international policy and practice at University of Michigan’s Ford School of Public Policy, has seen it all from multiple vantage points as he’s carved out a long career in foreign relations and diplomacy. The retired career minister in the U.S. Foreign Service has also served as ambassador to Brazil and Bulgaria, and as officer-in-charge of U.S.-Soviet Bilateral Relations.

He discusses where we are, how we got here and where we might be headed after the election.

It seems that public policy, international relations and diplomacy don’t matter as much to many Americans right now. There is a profound lack of trust for “the other side.” Is this more perception than reality, and does this divisive, distrustful era have a historical precedent?

Our president is divisive by nature. He believes a polarized society benefits him and that his base, particularly the marginalized working people, who believe they are looked down upon by the educated, economically well-off classes, love his belligerent manner and insulting style. Ironic as this may be, given his own wealth and social status, it has seemed to work. Congress is polarized on almost every issue and bipartisanship has nearly disappeared. Even foreign policy, which in the words of late Michigan U.S. Sen. Arthur Vandenberg, “stops at the edge of the water,” no longer stops there. During my lifetime, disputes over the U.S. role in Vietnam brought similar heated debates to the public arena. In my view, they were not nearly as intense as they are today.

What about the November election? Obviously, a potential change in the White House or control of the Senate would spell changes to policies, both foreign and domestic. But it doesn’t necessarily overcome distrust among the electorate, exacerbated by a pandemic and protests. Do you have reason for optimism that such conflicts could make way for cooperation?

You were recently quoted in U.S. News & World Report questioning the longevity of Vladimir Putin’s rule in Russia, with compounding geopolitical and public health problems. Do you see that in jeopardy regardless of the outcome of the U.S. election?

I do not think Putin is in danger of losing his grip in Russia, but I do believe that it has loosened a bit. The Kremlin’s tactic of poisoning opposition figures like Aleksei Navalny is certainly a disincentive to open expression of discontent. We are, however, seeing more intensity in the opposition to him and his fellow oligarchs through protests and demonstrations. This has occurred, not just in European Russia, but also in Far East cities like Khabarovsk, where major protests have taken place over Moscow’s replacement of popular local figures and the low quality of everyday life. Russia’s press and media is somewhat less constrained than it was in the Soviet period; even academics and a few think tanks have been openly critical of the lack of economic and political progress. Russia’s reliance on oil and gas exports to Western Europe, a major source of income, has suffered as the market during the COVID-19 pandemic has reduced demand.

What are your thoughts about the implications of Trump’s COVID-19 diagnosis on our broader society? The New York Times’ Frank Bruni recently wrote, “the presidency and the president are always national mirrors, in many different ways at once.”

One mark of how greatly cynicism now plagues our society is that some people believe that the president’s current bout with COVID-19 is itself a hoax to curry sympathy and avoid further debates with former Vice President Joe Biden. The chickens have come home to roost; the White House and the president have been involved in so much exaggeration and outright lying that a faked illness would be credible to at least a significant number of our citizenry. I do not believe this. I hope the Trump family and those infected in the White House staff improve and recover. However, I also hope that the rather large number of doubters of the benefits of masks and scientific and medical advice will finally change their ways to protect themselves and the rest of us.

What else is important for people to know about the state of international relations in 2020 and what are some of the most important trends you see developing in the coming year, such as nuclear, trade or climate alliances/pacts?

As I indicated, if Biden wins the election, I think we will see a major effort to repair and restore traditional relationships and at least gradually begin to reenter a number of environmental, trade and arms control agreements, perhaps with negotiations centered on amending them to take into account new conditions. This will require a major reinvigoration of the State Department and the U.S. Foreign Service to lead these diplomatic processes. I am more than worried about the depletion of the ranks and influence of those American diplomats charged with supporting and leading negotiations to shore up U.S. national interests. This group of dedicated Americans has been deprioritized at a time when America most needs their skills and experience.