ANN ARBOR—Scholarly gems are often found by sifting through dusty archives in foreign lands thousands of miles away. But sometimes they’re discovered just by doing some office cleaning on campus.

That’s what happened recently at the Center for Chinese Studies at the University of Michigan. Staffers who were tidying up a storage room found a stunning collection of rare propaganda papercut images from the Cultural Revolution—a period of massive political upheaval in China that began in 1966 and lasted about a decade. 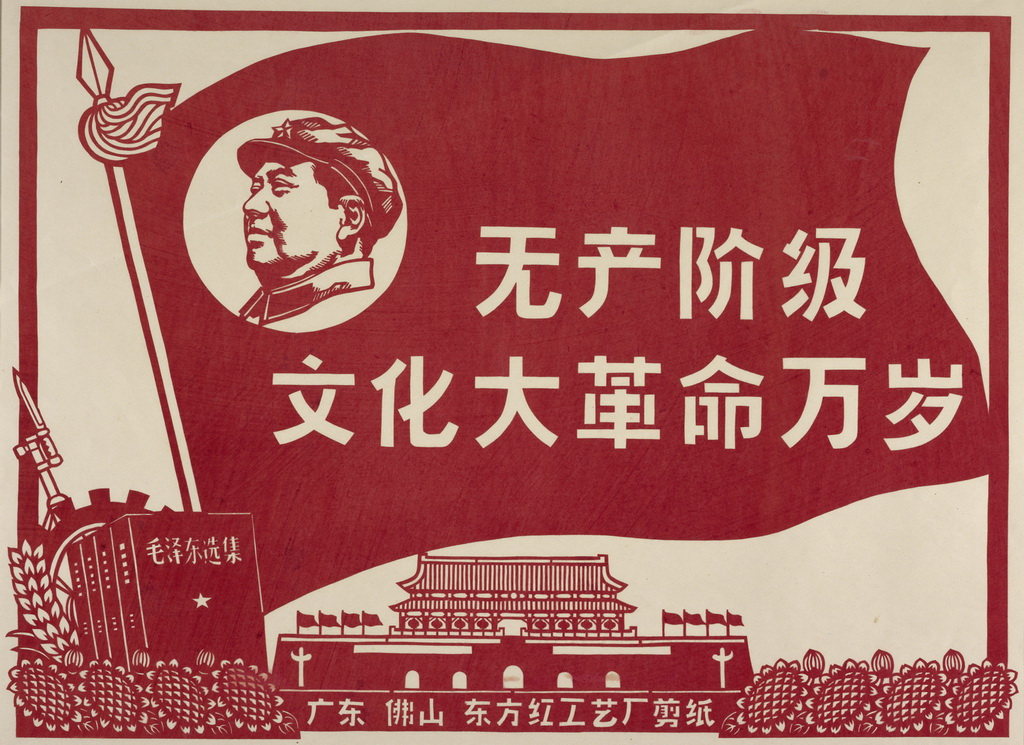 “Long live the Great Proletarian Cultural Revolution!” says the slogan on the flag that features the profile of the late Chinese leader Mao Zedong. The image is one of 15 papercuts recently discovered in a storage area for the Center for Chinese Studies, which is celebrating its 50th anniversary.With incredible detail, the long-forgotten papercuts portray the euphoria and zeal of the era as well as the violence and destruction that left the Chinese economy in shambles. The beautifully preserved poster-size images are painstakingly cut out of red paper in the tradition of the age-old Chinese handicraft, more commonly used to make decorations for weddings, Lunar New Year celebrations and other festivities.

One papercut shows the late Chinese leader Mao Zedong and his hand-picked successor, Lin Biao, standing up in a convertible car and waving to his cheering youthful followers, or Red Guards. In another image, Red Guards burn books while trampling on a Buddhist statue and other symbols of the feudal culture that Mao sought to wipe out. One papercut shows rallying workers threatening to stab political enemies with giant fountain pens that look like spears. 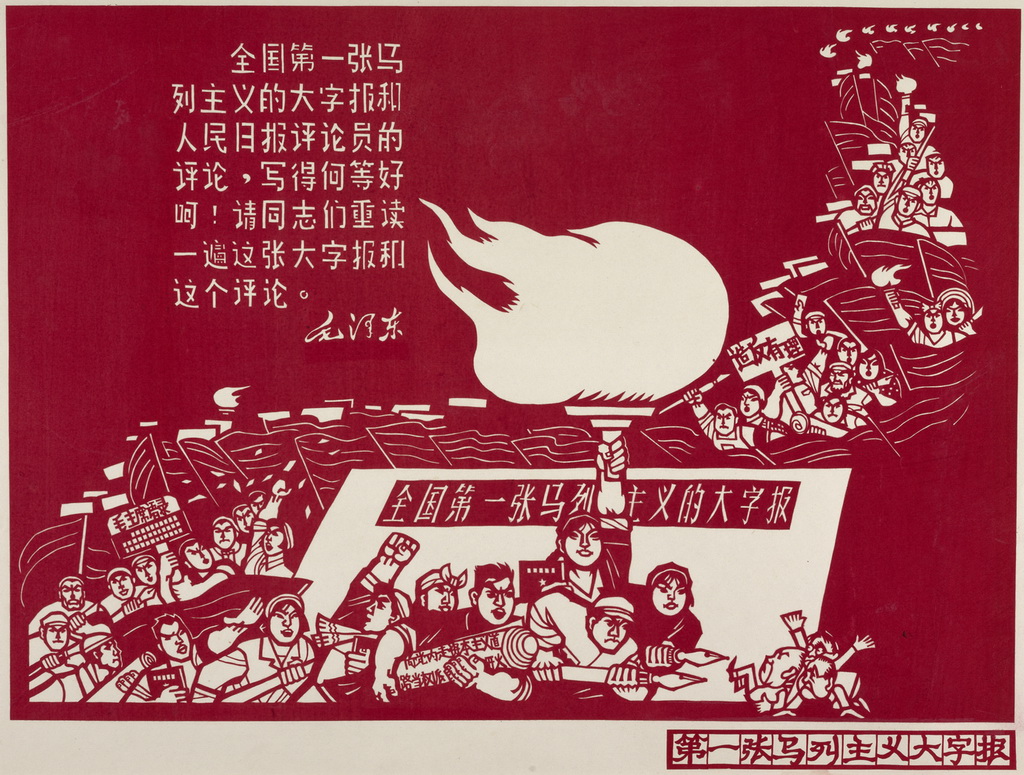 The papercut celebrates the nation’s first Marxist big character poster, one of the most popular propaganda tools in the Cultural Revolution. The image also praises editorial staff at the People’s daily, the mouthpiece of the Communist Party, for writing about the poster.Wang Zheng, an associate professor of history at U-M, said she plans to use the papercuts in a book she is writing about the Cultural Revolution.

“What struck me as extremely valuable is that this papercut set has 15 images total, and these 15 papercuts actually present a historical narrative,” Wang said. “I’ve never seen such a large coherent narrative presented visually.”

The Center for Chinese Studies, which celebrates its 50th anniversary this fall, has no clear record of who left the papercuts.

But the center’s director, Mary Gallagher, associate professor of political science, said the images were part of a large collection of material donated by the late scholar Michel Oksenberg, who taught at U-M for two decades beginning in 1973. Oksenberg is believed to have collected the paper cuts while doing research in Hong Kong in the early 70s, Gallagher said.

The set was probably made between 1970 and 71—during the middle of the Cultural Revolution—because they feature Lin Biao, Wang said. Lin was later accused of plotting a coup against Mao and branded a traitor after dying in a plane crash while fleeing the country in 1971.

Wang said the papercut collection is also significant because it was produced at a small art academy in the southern province of Guangdong—far from the center of power in Beijing. It’s unlikely that the collection was authorized or commissioned by the Communist Party’s central leadership, she said.

“This large art set was kind of spontaneously produced by the local artists. They didn’t have to follow Mao’s command,” she said. “In other words, we can use this to see how the very common, very average artists understood the Cultural Revolution at the time.”

Wang is trying to track down the artists in China and hopes to interview them to gain more insights about the era.

China’s revolutionary art is in high demand by collectors, and prices for papercuts vary a great deal in auctions and websites, said Xiaobing Tang, a U-M professor who studies modern and contemporary Chinese literature and visual culture.

Tang said that U-M’s papercuts are likely more valuable than others found online because they are more complex and refined.

“I would not be able to give the collection an appraisal,” he said, “but I can well imagine that each papercut may fetch over 1,000 RMB ($155) if it finds a serious collector.”

There are no immediate plans for a public display of the actual images because of concerns about preserving the delicate pieces. However, the public can learn more about the collection at http://quod.lib.umich.edu/c/ccs1ic or view high-resolution scans of the papercut images at http://quod.lib.umich.edu/c/ccs1ic?med=1;sort=ccs1ic_id;type=boolean;view=thumbnail;rgn1=ic_all;q1=ccs1ic.