Map shows two locations (CB2 and CB4) in Lake Erie’s central basin where University of Michigan researchers and their collaborators placed robotic laboratories on the lake bottom for more than two months to study the release of phosphorus from the muddy sediments. The released phosphorus contributes the central basin’s annual “dead zone,” a region of little or no oxygen that reduces habitat for fish and other organisms. Image credit: Anderson et al. in Environmental Science & Technology Water, 2021

Robotic laboratories on the bottom of Lake Erie have revealed that the muddy sediments there release nearly as much of the nutrient phosphorus into the surrounding waters as enters the lake’s central basin each year from rivers and their tributaries.

The release of phosphorus from Lake Erie sediments during periods of low oxygen—a phenomenon known as self-fertilization or internal loading—has been acknowledged since the 1970s. But the new University of Michigan-led study marks the first time the process has been monitored step by step for an entire season using lake-bottom sensors.

The authors of the new study, published online Feb. 18 in the journal Environmental Science & Technology Water, say self-fertilization is likely increasing the severity of Lake Erie’s central-basin dead zone and could make it harder to control in the future, as the climate continues to warm.

“Until now, we lacked evidence to pinpoint when and where this phenomenon occurs in Lake Erie and how much it contributes to nutrients in the lake,” said study lead author Hanna Anderson, a research technician at U-M’s Cooperative Institute for Great Lakes Research who did the work for a master’s thesis at the School for Environment and Sustainability.

“These new measurements have allowed us to estimate that this self-fertilization process contributes up to 11,000 metric tons of phosphorus to the lake water each summer, an amount that is close to the total annual runoff of phosphorus from rivers and tributaries into the central part of the lake,” said Casey Godwin, an assistant research scientist at the institute and a co-author of the paper.

Efforts to control Lake Erie nutrient pollution, or eutrophication, have focused on reducing the amount of phosphorus-rich runoff from farms and other sources that flows into the lake from rivers and their tributaries. In 2016, the U.S. and Canadian governments adopted a phosphorus-reduction target of 40%.

“Environmental managers tasked with tributary load reduction must take internal loading estimates into account when determining how to balance the total P load,” they wrote. “Historical and persistent sediment P loading represents a delayed lake response to eutrophication and prevents the successful management of a system when only external P loading is considered.”

In addition to several U-M scientists, authors of the paper include researchers from the National Oceanic and Atmospheric Administration’s Great Lakes Environmental Research Laboratory. U-M scientists and staff at CIGLR collaborate with NOAA GLERL on a number of projects such as this. 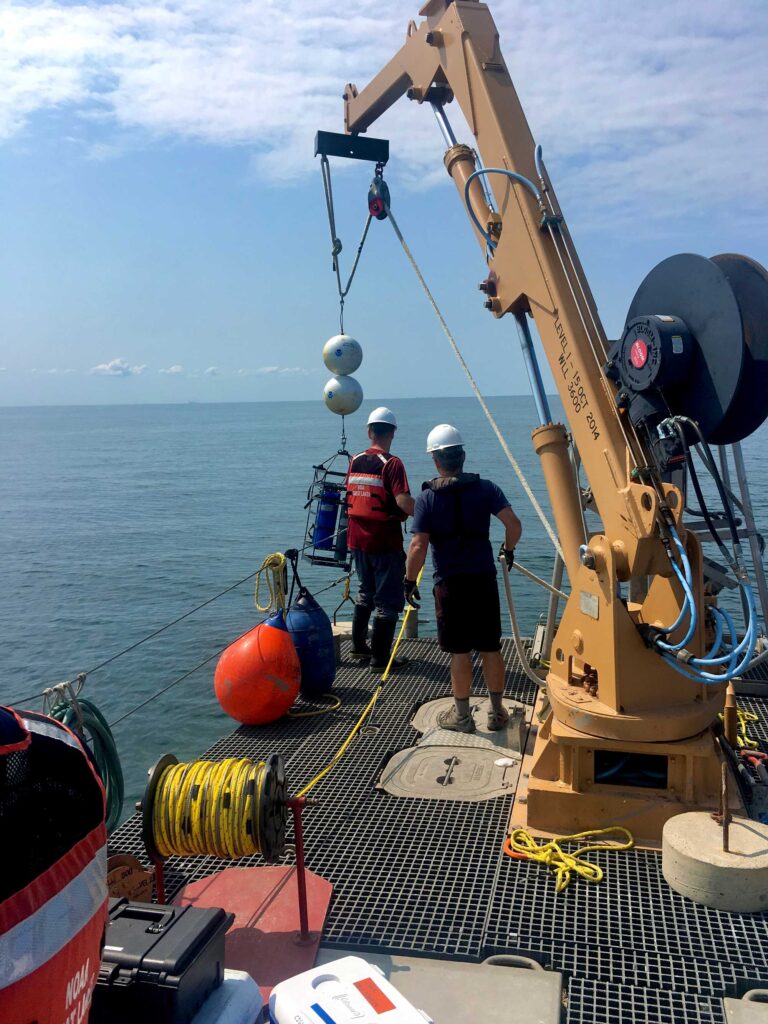 Researchers lower a robotic laboratory from the stern of a ship to the bottom of Lake Erie’s central basin in July 2019 for a University of Michigan-led study of phosphorus released from muddy lake-bottom sediments. Two of the autonomous labs were deployed: one at a depth of 67 feet and the other at a depth of 79 feet. Image credit: Hanna Anderson

The researchers deployed two small autonomous laboratories at lake-bottom sites in Lake Erie’s central basin—one at a depth of 67 feet and the other at a depth of 79 feet—in late July 2019 and left them there for more than two months.

The self-contained chemistry labs, manufactured by SeaBird Scientific and owned by the team’s NOAA collaborators, are cylinders 22 inches long and 7 inches wide. The labs and their batteries were placed inside a protective steel framework that was lowered from the stern of a ship. The metal cage was attached to a 150-pound weight and two white floats that kept it off the bottom.

The autonomous analyzers were programmed to measure phosphorus concentrations in the water every six hours. They also monitored water temperature and dissolved-oxygen levels. More than 300 phosphorus measurements were made at each site before the devices were retrieved in early October.

For example, earlier studies had suggested that nutrients begin to flow out of lake-bottom sediments when dissolved-oxygen concentrations in the surrounding waters drop to very low levels, a condition called hypoxia.

But the chemistry robots showed that the flow of phosphorus did not begin during hypoxia—even when oxygen levels dropped below the point where fish can survive.

Instead, the “positive P flux” from the sediments began 12 to 24 hours after dissolved oxygen levels in the lake-bottom water dropped to zero, a condition called anoxia. At the two central-basin sites in Lake Erie, that period began in late summer and continued into early October.

“Within 24 hours of when the oxygen went away completely, we recorded a rapid increase of phosphorus in the water, and this continued until the concentration at the bottom of the lake was more than a hundred times higher than at the surface,” said study senior author Thomas Johengen, director of U-M’s Cooperative Institute for Great Lakes Research.

“Our findings about the timing of phosphorus release relative to oxygen levels in the water are the first of their kind for the Great Lakes and represent a novel application of this technology,” Johengen said.

Knowing when the phosphorus release began, the rate of flow from the sediments, and the duration of the anoxic period enabled the researchers to estimate the total amount of phosphorus added to Lake Erie’s central basin each year due to internal loading.

The researchers estimated that Erie’s lake-bottom sediments annually release between 2,000 and 11,500 metric tons of phosphorus. The high end of this range equals the approximate annual inflow of phosphorus to Lake Erie’s central basin from rivers and tributaries: 10,000 to 11,000 metric tons.

The released phosphorus is in a readily available form called soluble reactive phosphorus, or SRP, that likely fuels central-basin algal growth. When those algae die and sink, bacteria decompose the organic matter and consume oxygen in the process. The result: an oxygen-starved region in bottom and near-bottom waters of the central basin known as the dead zone.

“Internal loading of phosphorus from lake-bottom sediments can become a positive feedback loop: Hypoxia leads to the release of P from the sediments, which causes more algae growth, and the dead and dying algae consume the oxygen in the water and contribute to hypoxia the following summer,” Godwin said.

“This type of feedback has been seen in lakes worldwide, and it interacts with ongoing efforts to reduce phosphorus loads from Lake Erie’s tributaries,” he said.

As the Great Lakes continue to warm in the years ahead due to human-caused climate change, Lake Erie’s central-basin dead zone is expected to form earlier and last longer each year, resulting in a greater supply of phosphorus released from the sediments, according to the study authors.

The current study demonstrates the potential for using robotic laboratories to monitor those changes, as well as any changes that may occur due to the decreased flow of nutrients into Lake Erie from rivers and tributaries, according to the authors. Internal loading from central-basin sediments likely does not impact the severity of Lake Erie’s western-basin algal blooms, according to the researchers.

“NOAA’s mission in the Great Lakes includes observing, understanding and forecasting significant events such as internal loading. Very often, the development and application of advanced technology such as this can confirm a hypothesis or provide novel insight that was previously impossible,” said study co-author Steve Ruberg, senior scientist at NOAA’s Great Lakes Environmental Research Laboratory.

The work was supported by NOAA’s National Centers for Coastal Ocean Science Competitive Research Program and through the NOAA Cooperative Agreement with the Cooperative Institute for Great Lakes Research at the University of Michigan.