Relics of the Milky Way’s first generation of stars 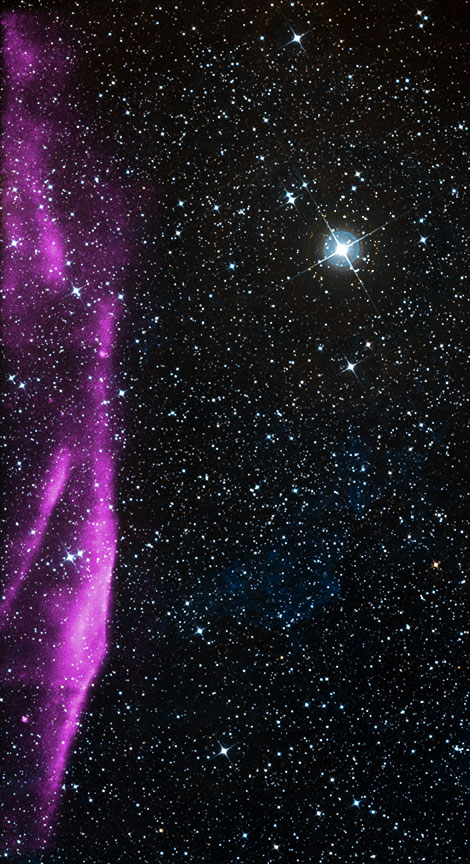 Supernova remnant G266.2-1.2, as seen in X-ray and optical wavelengths. Supernova remnants are made of dust that includes elements produced by the supernova that spawned it. Eventually, the matter in supernova remnants mixes with other gas and dust and forms a new generation of stars. Credit: X-ray: NASA/CXC/Morehead State Univ/T.Pannuti et alANN ARBOR—The first stars that made up the Milky Way have long burnt out, but astronomers have, for the first time, observed a new set of chemical elements that formed in their cores and the supernova explosions that marked the spectacular ends of their short lives.

“We’ve put a new spin on a very old technique to measure the chemical fingerprints of this star,” said Ian Roederer, an astronomy lecturer and assistant research scientist in the University of Michigan’s College of Literature, Science and the Arts. “Stars remember the nurseries where they were born, and we were able to glean some valuable pieces of that memory with these new observations.”

As a result of these explosions, the first-generation stars produced new elements. Mapping these new elements with the physics of their production enables scientists to learn something about the characteristics of that original star.

“Knowing more about the composition of the universe’s original stars can tell us where we came from,” Roederer said. “Stars are the factories where all the universe’s elements aside from hydrogen and helium were made, including the ones that make up our Earth and even our own bodies.”

For their research, Roederer’s team chose a star named BD+44 493, thought to be the brightest known second-generation star in the sky. Although the star is about 600 light years away, it’s visible with a very good pair of binoculars.

The team picked BD+44 493 not only for its visibility, but also because it contains a high concentration of carbon and low concentration of iron and other heavy elements—and thus likely formed from a single first-generation star. In addition to detecting phosphorus and sulfur in the ultraviolet spectrum of the star, the team found the element zinc, which had been seen only once before in a second-generation star.

The presence of these three elements in the quantities that the team observed means that the particular star that introduced these atoms into space was likely massive—probably more than 20 times more massive than our own sun—and exploded as a supernova.

“One of the peculiar features of that supernova is that it was less energetic than what we would consider a normal supernova explosion,” Roederer said. “This is a different story than was told about another first-generation supernova from a previous detection of zinc in another second-generation star.

“In that case, the explosion was more energetic than normal. Even from just these two objects, we learn that supernova explosions from the first stars were quite diverse.”

The discovery also introduces future possibilities for learning more about first-generation stars. Currently, the Hubble Space Telescope is the only way to view the UV spectra of stars, but Roederer says that as more powerful UV spectrographs become available, they may be used by researchers to look at many more second-generation stars—which will reveal new information about the diverse characteristics of our universe’s first stars.

Also contributing to this work are Vinicius Placco and Timothy Beers of the University of Notre Dame. A paper on the findings titled “Detection of Phosphorus, Sulphur, and Zinc in the Carbon-Enhanced Metal-Poor Star BD+44 493” is published in the June 20 issue of Astrophysical Journal Letters. The work was supported by NASA and the Space Telescope Science Institute.