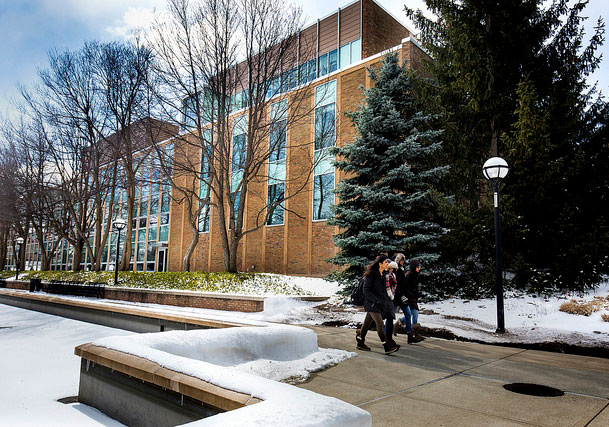 Inside it, researchers in the nation’s top-ranked nuclear engineering program will focus on advancing nuclear security, nonproliferation, safety and energy. The equipment that the new lab will house includes a high-resolution system for imaging coolant flow in reactors in unprecedented detail, and an accelerator that will be used in development of faster, more accurate ways to identify nuclear materials.

“This new Nuclear Engineering Laboratory building is the culmination of some seven years of planning, design and construction,” said Ronald Gilgenbach, the Chihiro Kikuchi Collegiate Professor and chair of the Department of Nuclear Engineering and Radiological Sciences.

“The laboratories in this building will provide the world’s finest university facilities for research in the fields of nuclear measurements for nonproliferation, thermal hydraulics for nuclear reactor safety and advanced radiation detector development.”

The $12.4 million renovation, which began in 2015, is made possible in large part by Bob and Betty Beyster, who gave the first $5 million for the project. Bob Beyster received bachelor’s degrees in engineering physics and engineering math from U-M in 1945. He earned master’s and doctoral degrees in physics at U-M in 1947 and 1950, respectively. Mary Ann Beyster, daughter of Bob and Betty Beyster and president of the Foundation for Enterprise Development, spoke at the building opening.

“Dad’s company, Science Applications International Corporation, addressed nationally important nuclear priorities for the federal government from day one and expanded IT technical service to the country and the private sector over its approaching five decades,” Mary Ann Beyster said. “He would be incredibly impressed by what we see here today: His investment in the future, along with others, has turned into a three-dimensional space where researchers can address critically important issues for this nation and the world.”

The four-story building contains 13,200 square feet of laboratories, offices and conference rooms. Inside it:

The former reactor space, thoroughly cleared of radioactive residues, is well suited to nuclear engineering research because the thick walls are designed to stop radiation—built-in protection for people inside and out of the building. While the reactor was once the centerpiece of the Michigan Memorial Phoenix Project, which focused on developing peaceful uses of the atom, the spirit of its founders will live on in the Nuclear Engineering Laboratories. 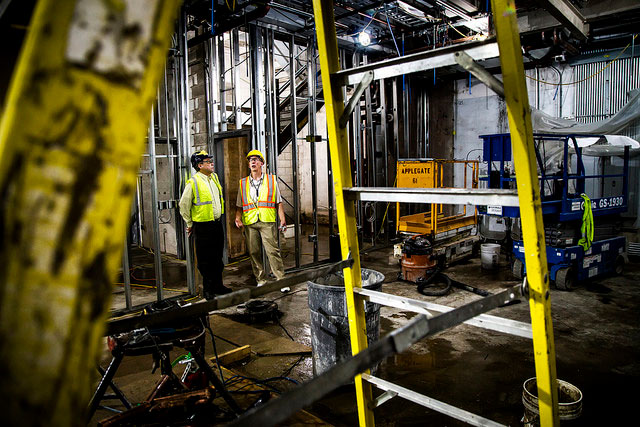 Ron Gilgenbach, Chihiro Kikuchi Collegiate Professor and Chair of the Nuclear Engineering and Radiological Sciences Department, and Robert Blackburn, Facilities Coordinator/Manager, tour the Nuclear Engineering Laboratory while it is under construction on North Campus of the University of Michigan in Ann Arbor, MI on August 16. 2016. Photo: Joseph Xu/Multimedia Content Producer, University of Michigan – College of Engineering“Michigan’s leadership in nuclear engineering goes back to the dawn of the field, as the first degree program of its kind. Michigan’s research is spurring progress in nuclear power production through reactor safety and advanced reactor designs, and is leading the development of state-of-the-art sensors for nuclear nonproliferation,” said Alec Gallimore, the Robert J. Vlasic Dean of Engineering and the Richard F. and Eleanor A. Towner Professor.

The new facilities are also made possible by $800,000 in gifts from Gladys Hetzner Knoll, who received a bachelor’s degree in nursing in 1978 and a master’s in 1980, and is the widow of Glenn Knoll; the estate of Harold N. Cohn; and the family and friends of John S. King.