Research on aging expands at U-M 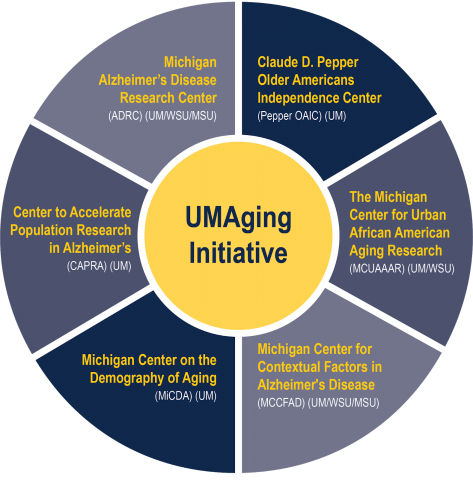 New grants totaling more than $15 million will amplify the University of Michigan’s ability to conduct research on aging and to help identify and address issues facing older adults today and into the future.

A sixth center—the Michigan Center for Urban African American Aging Research—is one of 18 national Resource Centers for Minority Aging Research. A collaboration among U-M, Michigan State University and Wayne State University, it seeks to enhance the diversity of the aging research workforce and to develop infrastructure to promote advances in research on the health and well-being of minority elders.

U-M also was awarded a new grant to host the coordinating center for more than a dozen demography of aging centers nationwide funded by NIA.

“The UMAging centers share a commitment to advancing research on the most pressing health-related issues for older adults and together strengthen our ability to more fully understand the implications of our aging society,” said Vicki Freedman, director of the Michigan Center on the Demography of Aging and a research professor at the U-M Institute for Social Research.

All of the centers offer faculty development opportunities such as seed funding for pilot projects and mentorship or training programs. Some centers also support scientific networks to address emerging multidisciplinary topics, focus on recruitment of research participants, or offer data-related services.

“We have a tremendous opportunity through our collaborative research to engage the next generation of scientists and shape the future of healthy aging across all our communities,” said Julie Bynum, who leads the Center to Accelerate Population Research in Alzheimer’s and is the associate director for health policy and research at the U-M Geriatrics Center and a professor of geriatrics.

Raymund Yung, chief of geriatric and palliative medicine at Michigan Medicine and leader of the Pepper Center, says aging research is critical to improving the well-being of the aging population.

“The current COVID-19 crisis further highlights the vulnerability of the older population and the need for high-quality research focusing on older adults,” he said. “The breadth of aging research at the University of Michigan will position us well for the challenges ahead.”

Even as it welcomes the awarding of the new grants, U-M’s community of researchers on aging is mourning the loss of one of its long-standing leaders: James Jackson, who led the Michigan Center for Urban African American Aging Research for 22 years and the Institute for Social Research for 10 years. An emerging scholars fund has been established in his name.

Beyond the NIA-funded centers, U-M faculty members are involved in a variety of efforts to study and address issues affecting older adults, to train the next generation of scholars through training grants, and to offer resources to study aging as well as access to advanced treatment and clinical research.

ISR faculty provide leadership to some of the most widely used data resources on aging funded by NIA, including the Health and Retirement Study, Panel Study of Income Dynamics and National Health and Aging Trends Study. ISR also hosts the National Archive of Computerized Data on Aging, which disseminates gerontological data resources for use by researchers around the world, including data from major aging studies.

U-M’s Institute for Healthcare Policy and Innovation has a core focus on aging-related issues and is the home of the National Poll on Healthy Aging. U-M faculty and trainees also participate in aging-related research through the VA Geriatric Research Education and Clinical Center at the VA Ann Arbor Healthcare System.

Thousands of older adults from throughout Michigan receive care at Michigan Medicine’s Geriatrics Center and take part in clinical research studies led by its faculty as well as a range of community programs.