ANN ARBOR—More than a century ago, early geneticists showed that the inheritance of a single mutation by fruit flies can change the insect’s body color and simultaneously disrupt its mating behavior.

The studies, performed in the laboratory of Thomas Hunt Morgan, were the first to demonstrate that some behaviors have a genetic basis. The fruit fly experiments also provided an early example of pleiotropy, a phenomenon in which a single gene has the ability to influence multiple traits. 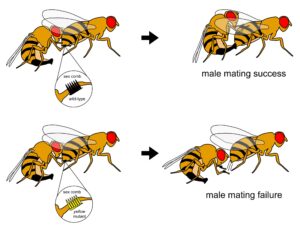 In the decades that followed, scientists have been unable to satisfactorily explain how a single genetic mutation was able to change a male fruit fly’s body color from brown to yellow and at the same time affect mating behavior. Some researchers suggested the mutation caused brain changes that interfered with mating.

But in a study published Oct. 15 in the journal eLife, University of Michigan biologists show that the solution to the yellow fly mystery is not in the insect’s tiny brain. Instead, it has to do with changes in the morphology of specialized leg structures called sex combs.

The researchers used a series of genetic screens and high-speed video recordings of mating to demonstrate that male yellow flies lacking pigments in sex combs were unable to grasp females for mounting and copulation following courtship. The findings explain why yellow flies mate poorly and also reveal why fruit flies possess sex combs, which are modified bristles on the front legs with previously unknown function.

In addition, the study’s results could eventually have applications in the pest-control industry and in public health, according to study first author Jonathan Massey, who did the work as part of his doctoral dissertation in the U-M Department of Ecology and Evolutionary Biology. His adviser was EEB’s Patricia Wittkopp, who is a senior author on the eLife paper.

“We aimed to solve the yellow fly mystery because the answer would help better explain how genes controlling animal morphology could also influence animal behavior,” said Massey, who is now a postdoctoral research fellow at Harvard Medical School and Boston Children’s Hospital.

“If, for example, pest managers have a clearer understanding of how individual mutations cause critical disruptions in mating success, they could develop targeted strategies to block reproduction in species that transmit disease or destroy crops.”

In insects, pigments are synthesized from the chemical dopamine, which is best known as a neurotransmitter used in animal brains to send messages between nerve cells. Because of the dopamine connection, yellow fruit flies were hypothesized to have altered levels of the neurotransmitter in their brains, causing them to mate abnormally.

But Massey and his colleagues were able to show that dopamine’s role in pigment synthesis, not its job as a neurotransmitter, was to blame for the observed mating problems. Yellow mutants lack the pigment melanin, which in fruit flies is also responsible for stiffening various body parts, including the sex combs.

Without melanin, perhaps the sex combs lacked the stiffness needed to grasp the female abdomen when attempting to mount and copulate, the researchers hypothesized. To test this idea, Massey and his colleagues used scanning electron microscopy to examine the sex combs of male mutants and observed structural changes that included a crack in one of the comb teeth.

“We performed many complementary experiments confirming that it’s all about melanin’s effect on the comb’s ability to grab the females,” Massey said. “By solving the yellow fly mystery, we were able to show how a gene that changes the pigmentation of an insect can simultaneously be critical for its mating behavior.”

Other recent studies have also shown the importance of body-part morphology for critical behaviors in various organisms: schooling in stickleback fish, walking in water striders and singing in crickets.

“These observations all underscore that behavior cannot be understood by studying the nervous system alone; anatomy and behavior function and evolve as an interconnected system,” Massey and his colleagues wrote.

The yellow fly study began when Massey and U-M undergraduate neuroscience alumna Daayun Chung teamed up in 2016. Chung received the U-M Neuroscience Director’s Award for her contribution to the project and is currently a doctoral student in neuroscience at Northwestern University. Massey continued pursuing the topic for his doctoral dissertation, working in Wittkopp’s lab.

Later, he spent two years working in the laboratory of David Stern at the Howard Hughes Medical Institute’s Janelia Research Campus in Virginia, where he captured the high-speed videos. In addition to Massey, Wittkopp, Chung and Stern, the other author of the eLife paper is Igor Siwanowicz of HHMI’s Janelia Research Campus, who provided his imaging expertise to capture photographs of the sex combs.

Funding for the study was provided by the U-M Department of Ecology and Evolutionary Biology, the Peter Olaus Okkelberg Research Award, a National Institutes of Health training grant, and a Howard Hughes Medical Institute Janelia Graduate Research Fellowship. Wittkopp is a senior editor at eLife.