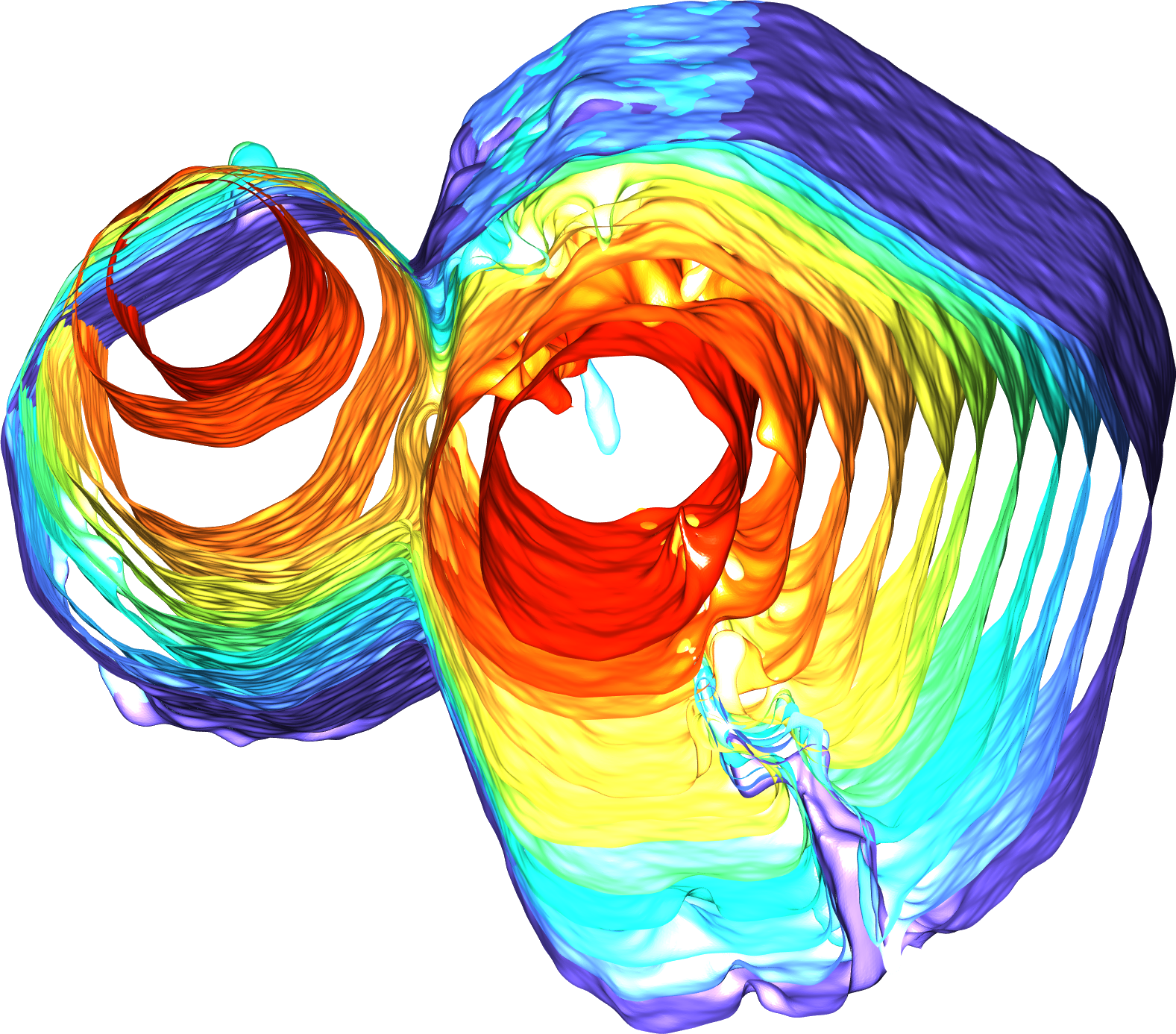 An X-ray tomography visualization shows a top-down view of two quasicrystals as they start to meld together during cooling. Image credit: Shahani Group, University of Michigan

A class of materials that once looked as if it might revolutionize everything from solar cells to frying pans—but fell out of favor in the early 2000s—could be poised for commercial resurrection, findings from a University of Michigan-led research team suggest.

Published in Nature Communications, the study demonstrates a way to make much larger quasicrystals than were possible before, without the defects that plagued past manufacturers and led quasicrystals to be dismissed as an intellectual curiosity.

“One reason why industry gave up on quasicrystals is because they’re full of defects,” said Ashwin Shahani, U-M assistant professor of materials science and engineering and chemical engineering and a corresponding author on the paper. “But we’re hoping to bring quasicrystals back into the mainstream. And this work hints that it can be done.”

Quasicrystals, which have the ordered structure but not the repeating patterns of ordinary crystals, can be manufactured with a range of alluring properties. They can be ultra-hard or super-slippery. They can absorb heat and light in unusual ways and exhibit exotic electrical properties, among a host of other possibilities.

But the manufacturers who first commercialized the material soon discovered a problem—tiny cracks between crystals, called grain boundaries, that invite corrosion, rendering quasicrystals susceptible to failure. Commercial development of quasicrystals has been mostly shelved ever since.

But new findings from Shahani’s team show that, under certain conditions, small quasicrystals can collide and meld together, forming a single large crystal with none of the grain boundary imperfections found in groups of smaller crystals. Shahani explains that the phenomenon came as a surprise during an experiment designed to observe the formation of the material.

An X-ray tomography visualization shows a side view of two quasicrystals as they begin to meld together during cooling. Image credit: Shahani Group, University of Michigan

“It looks like the crystals are healing themselves after collision, transforming one type of defect into another type that eventually disappears altogether,” he said. “It’s extraordinary, given that quasicrystals lack periodicity.”

The crystals start as pencil-like solids measuring a fraction of a millimeter, suspended in a molten mixture of aluminum, cobalt and nickel, which the team can observe in real time and in 3D using X-ray tomography. As the mixture cools, the tiny crystals collide with each other and meld together, ultimately morphing into a single large quasicrystal that’s several times larger than the constituent quasicrystals.

After observing the process at Argonne National Laboratory, the team replicated it virtually with computer simulations. By running each simulation under slightly different conditions, they were able to identify the exact conditions under which the tiny crystals will meld into larger ones. They found, for example, that the tiny pencil-like crystals must face each other within a certain range of alignment in order to collide and coalesce. The simulations were conducted in the lab of Sharon Glotzer, the John Werner Cahn Distinguished University Professor of Engineering and a corresponding author on the paper.

“It’s exciting when both experiments and simulations can observe the same phenomena happening on the same length and time scales,” Glotzer said. “Simulations can see details of the crystallization process that experiments can’t quite see, and vice versa, so that only together can we fully understand what’s happening.”

While commercialization of the technology is likely years off, the simulation data could ultimately prove useful in developing a process to efficiently produce large quasicrystals in production-scale quantities. Shahani anticipates the use of sintering, a well-known industrial process where materials are melded together using heat and pressure. It’s a far-off goal, but Shahani says the new study opens a new avenue of research that could one day make it happen.

For now, Shahani and Glotzer are working together to understand more about quasicrystal defects, including how they form, move and evolve.

The paper is titled “Formation of a Single Quasicrystal Upon Collision of Multiple Grains.” The research team also includes Brookhaven National Laboratory.

The research was supported by the U.S. Department of Energy, Office of Science, Office of Basic Energy Science, Award number DE-SC0019118.