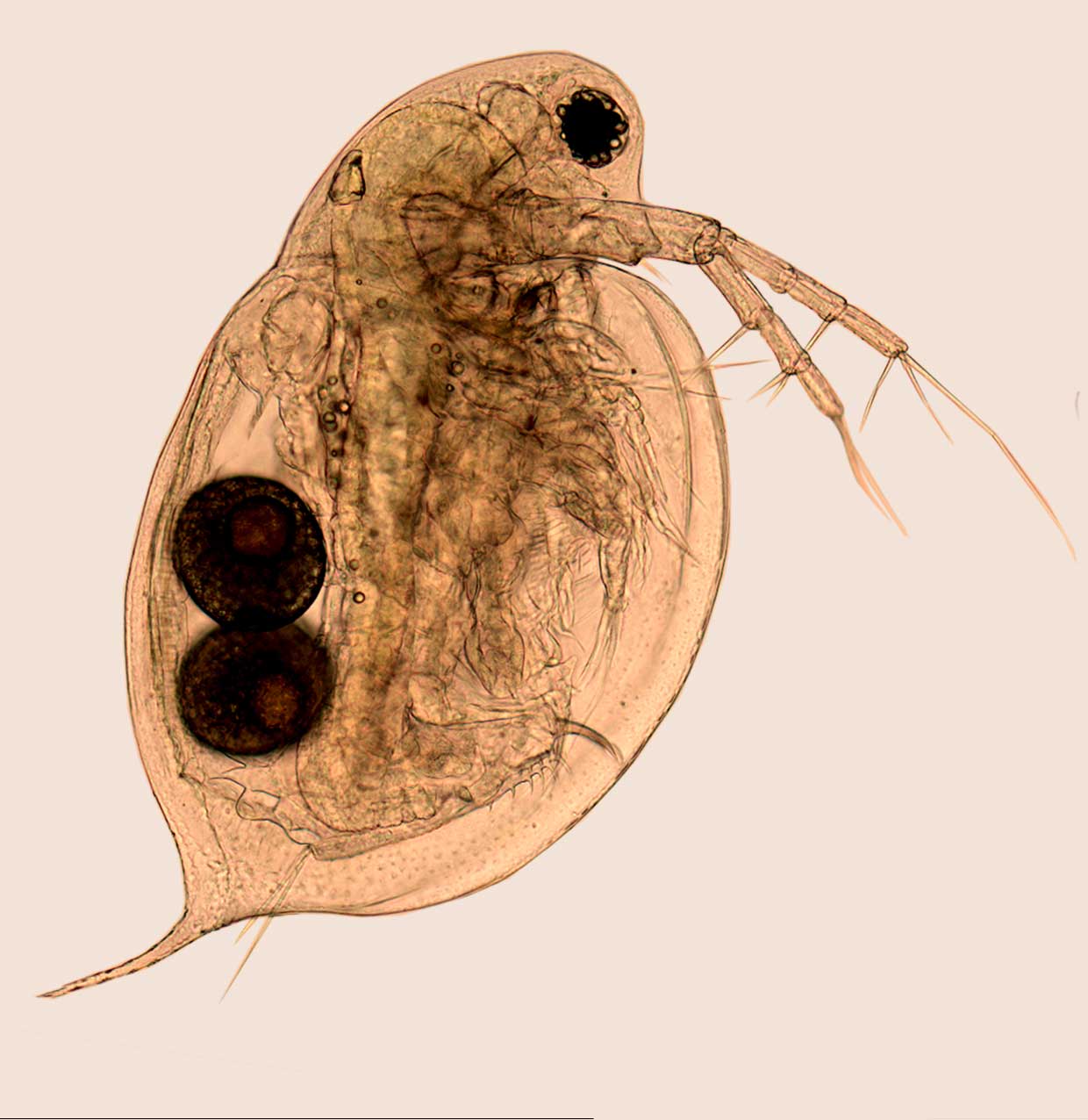 Microscope image of a 4-day-old Daphnia ambigua crustacean, like those used in a new study of evolutionary responses to heavy-metal contamination in lakes. Image credit: Eric Lazo-Wasem

ANN ARBOR—A University of Michigan biologist combined the techniques of “resurrection ecology” with the study of dated lake sediments to examine evolutionary responses to heavy-metal contamination over the past 75 years.

To accomplish this, Mary Rogalski hatched long-dormant eggs of Daphnia, tiny freshwater crustaceans also known as water fleas, that accumulated in the lake sediments over time.

After rearing the critters in the lab, she exposed them to various levels of two heavy metals to see how their sensitivity to the environmental contaminants changed over time. Surprisingly, she found that sensitivity to copper and cadmium increased as the levels of those toxic metals rose in the lakes she studied.

“These findings are unexpected because evolutionary theory predicts that a population should adapt quickly to a stressor like this and become less sensitive to it, not more sensitive to it. It is difficult to explain the results of this study,” said Rogalski, a postdoctoral researcher in the U-M Department of Ecology and Evolutionary Biology.

In one of the lakes, Daphnia hatched from sediments dating to around 1990—when copper contamination was at its peak—were 46 percent more sensitive to copper exposure than individuals from the 1940s, a period with lower levels of copper contamination.

Rogalski reports her finding in a study published online Feb. 16 in the journal The American Naturalist. The study was part of her dissertation research at the Yale University School of Forestry & Environmental Studies and involved fieldwork at three Connecticut lakes. 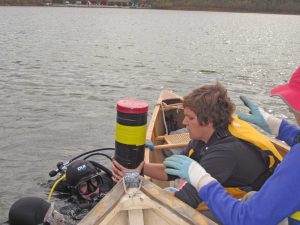 Scuba divers collected 5-inch-diameter sediment cores from the lake bottoms. Rogalski then estimated sediment ages based on the presence of radioactive materials and measured concentrations of copper and cadmium in the layers back to the late 1800s.

Copper contamination in the lakes was largely due to yearly applications of copper sulfate to control nuisance algae. The cadmium likely came from industrial and agricultural development in the region over the past century.

In the lab, Rogalski isolated dormant or “diapausing” Daphnia ambigua eggs from various dated sediment layers, then hatched and raised them. She measured Daphnia’s changing sensitivity to copper and cadmium by exposing them to various levels of the metals in glass flasks and determining the median lethal concentration.

In one Connecticut lake where copper contamination has declined recently, she found that Daphnia remain sensitive to the metal 30 years after peak exposure. An adult Daphnia is about the size of a very coarse grain of sand.

“It is difficult to know what mechanisms are driving this evolutionary pattern,” Rogalski said. “Even so, this research suggests that we need to do more to uncover both the drivers and implications of maladaptation in nature.”

Paleolimnology is the study of ancient lakes from their sediments and fossils. The branch of experimental paleolimnology that Rogalski used in this study has been dubbed “resurrection ecology” by its practitioners. 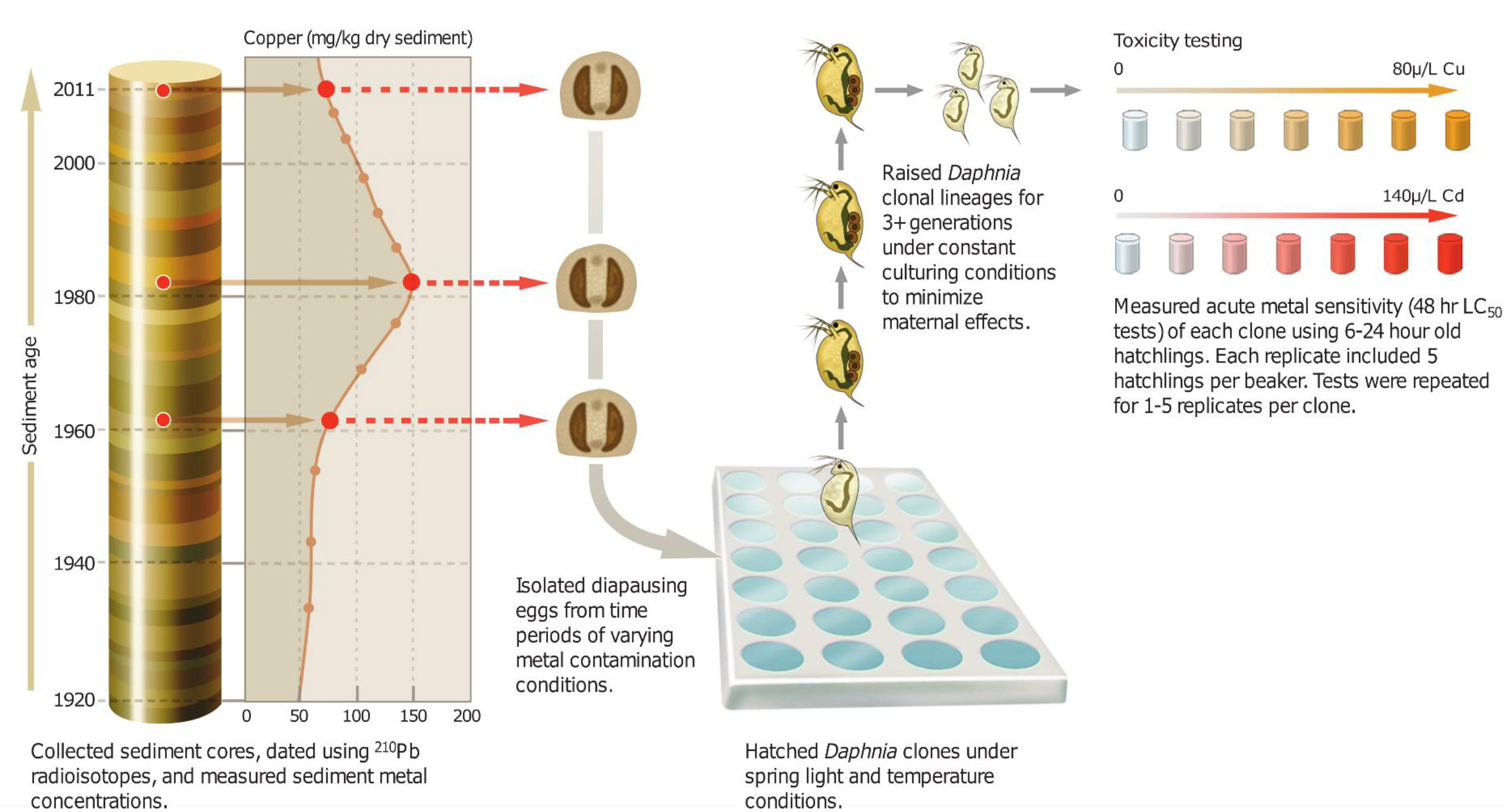 Diagram showing steps in a study that combined “resurrection ecology” with an analysis of dated lake sediments to examine evolutionary responses to heavy-metal contamination over the past 75 years. Image credit: John Megahan

For example, a newly introduced pesticide may kill the vast majority of the insects it targets. But the survivors can then give rise to a pest population that is resistant to the chemical.

But some populations fail to adapt to changing environments or can wind up worse off than they were beforehand, an occurrence known as maladaptation.

Maladaptive outcomes are less common than adaptive one and are less studied. In many cases, it is impossible to examine a population’s response to a stressor over multigenerational timescales without conducting a long-term study that could take decades to complete.

The Daphnia crustacean, with its diapausing eggs, provides a time machine of sorts, allowing researchers to examine long-term evolutionary responses to environmental stressors by reviving and rearing dormant organisms trapped in lake bottoms.

“Daphnia offer a system where examining historic evolutionary trajectories is possible,” Rogalski wrote in The American Naturalist. “Hatching diapausing eggs from dated lake sediments and culturing clonal lineages in the lab allows us to examine how populations change through time and the genetic basis underlying those changes.”

The research was supported by the Yale Institute for Biospheric Studies.