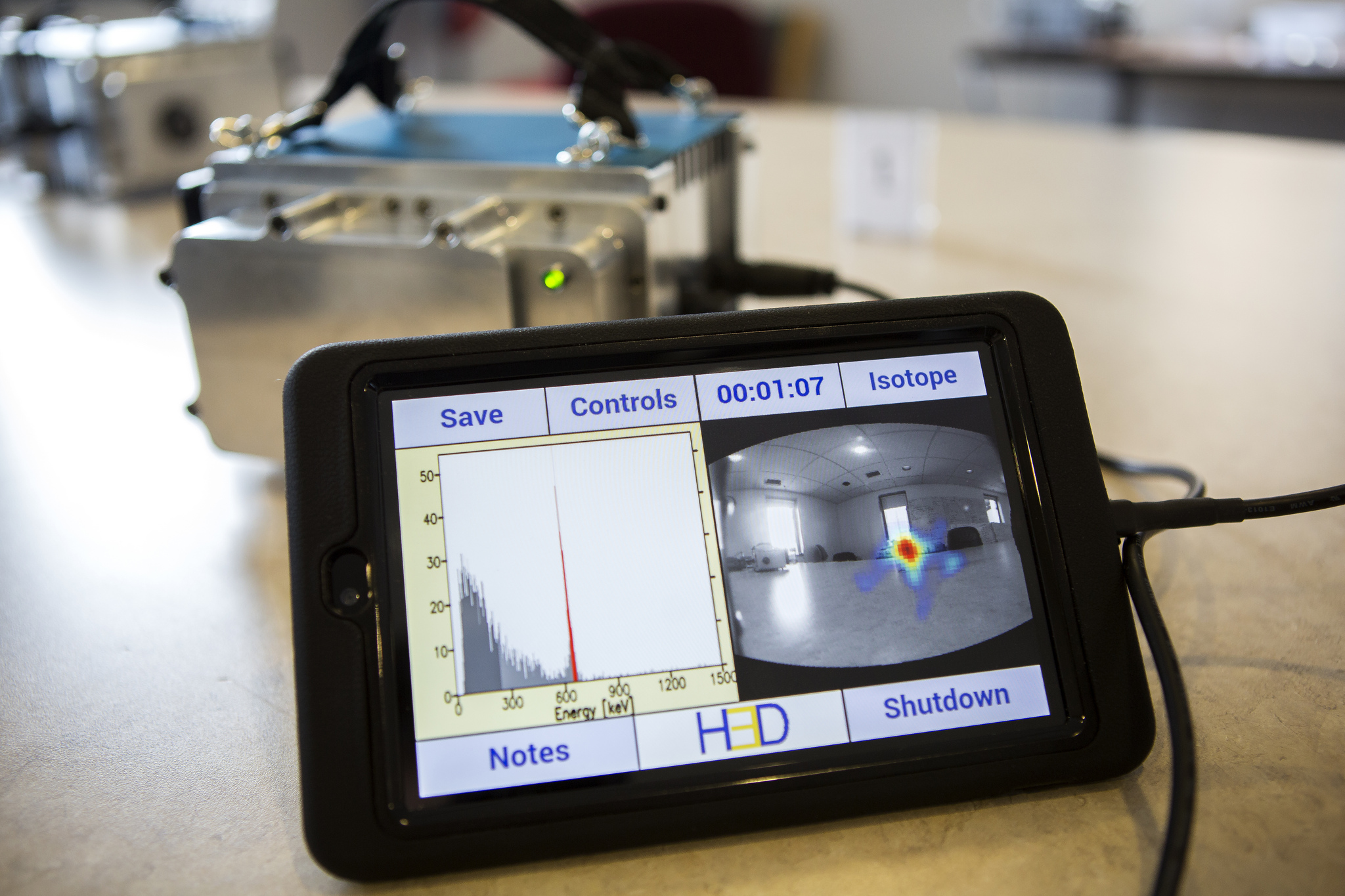 The new ‘Polaris-H’ detector lays a gamma-ray map over an image of a room, pinpointing radiation sources with unprecedented precision. At least four U.S. nuclear power plants are using versions of the camera, which is now available commercially through the U-M spinoff company H3D.

“This technology enables people to ‘see’ radiation,” said Zhong He, a professor of nuclear engineering and radiological sciences at U-M and CEO of H3D. “This should enable the early detection of leaks by locating abnormal radiation, a much better understanding of radiation sources to protect workers, and it could be a tool for the cleanup effort of nuclear waste and fallout, such as in Fukushima in Japan.”

Radiation safety professionals have called the device revolutionary. They say it could become the new standard.

“We can find things now in 30 minutes that could take weeks to find before,” said Robert Hite, radiation protection manager at the Cook Nuclear Plant near St. Joseph, Mich., and early adopter of Polaris-H. “All of our technology that we have—that I’ve worked with for 30 years—doesn’t touch what this shows us.”

A radiation imager offers plant managers like Hite a quicker way to identify and locate problems, including radioactive buildup in pipes, stray radioactive particles in otherwise clean areas and leaky fuel rods. Also, in the event of an accident, an imager could monitor radiation plumes and point out contaminated areas.

The gamma camera operates at room temperature, which is an improvement for the many plants that currently work with cumbersome, cryogenically cooled detectors. Room-temperature radiation imagers have been poor performers in the past, so many nuclear power plants in the U.S. rely on non-imaging detectors to find contamination. Locating the source of the problem often means moving the non-imaging detector around the contaminated area to find areas with high radiation counts. 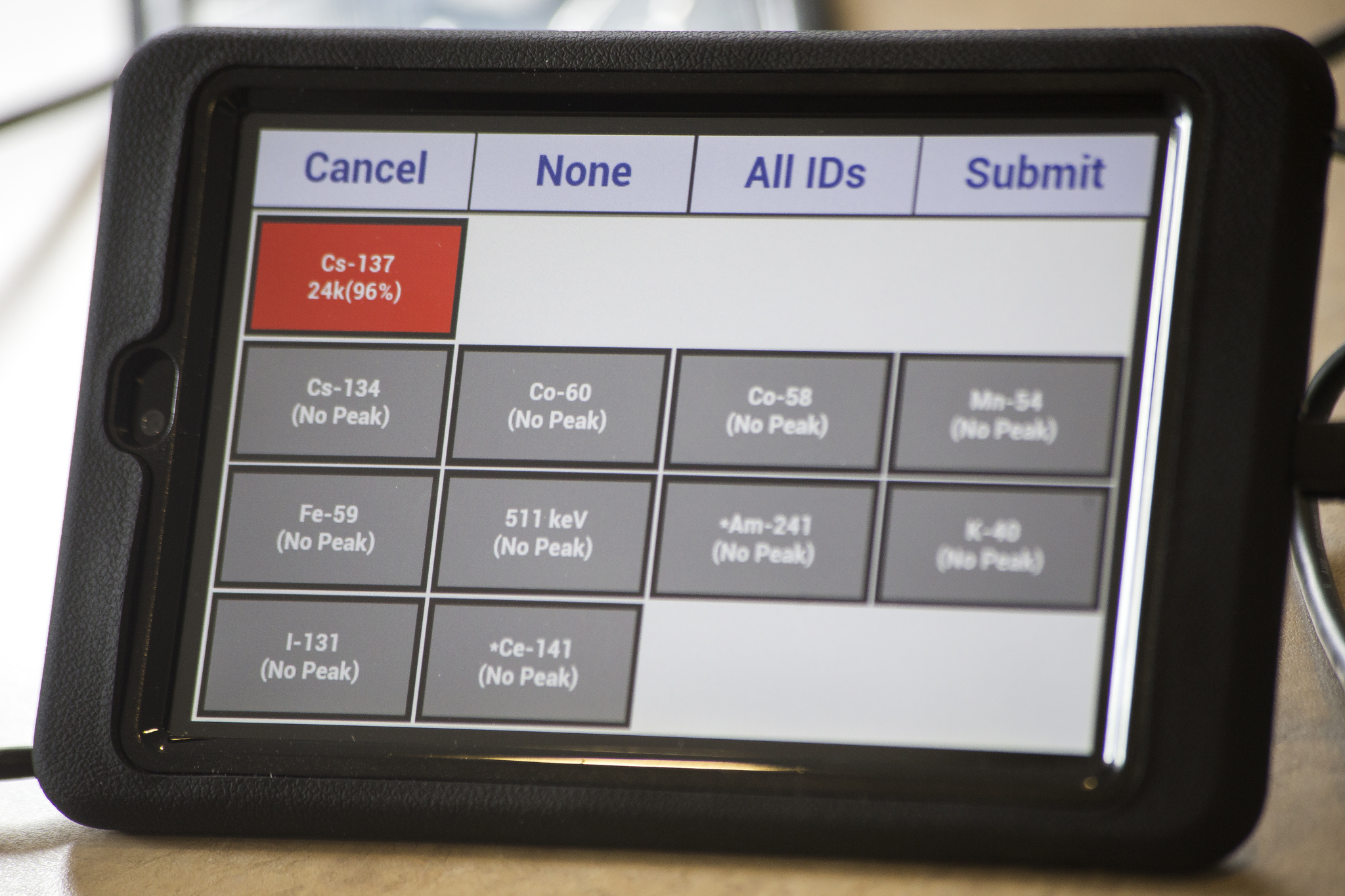 Readings on the Polaris-H. Image credit: Joseph XuTo use Polaris-H, though, an operator can simply set the camera in the contaminated area, switch it on and then leave the room while it reveals the radiation hotspots and identifies the radioactive elements present. A 15-foot cord connects the detector and an external touchscreen controller so the operator can give commands and download data remotely. The camera stores radiation detection data on a USB drive that operators can transfer to a computer for in-depth analysis.

The technology grew out of a project in He’s lab. The original briefcase-sized Polaris was developed for catching terrorists, but the team quickly realized that the nuclear energy industry could put the technology to use for safety. Five of He’s former graduate students making up the bulk of the company’s staff.

Prototype models are in use at the Cook plant and South Korea’s Institute for Basic Science in Daejeon. Based on feedback from these users over the past year, the team made it possible to operate the camera using a simple red button to start and end measurements.

“Our demonstrations used to last 20 minutes,” said H3D president William Kaye, a recent doctoral graduate in nuclear engineering and radiological sciences. “Now we just switch on the machine and say, ‘Okay, these are all the isotopes, this is where they are, any questions?'”

Kaye said that this level of information hasn’t been available in the past, so the H3D team hopes to educate customers about how it can be used. For instance, sometimes the radiation source is ambiguous after detector measurements. A set of pipes might appear to be radioactive, but an image could clearly show whether the radiation was uniform, or whether some pipes were more radioactive than others.

In addition to the nuclear plants, NASA and the Department of Defense are also using the detectors.