ANN ARBOR—After a four-year hiatus from play, fans can expect fierce competition when the University of Michigan and Notre Dame football teams hit the gridiron Sept. 1. But off the field the universities will put the rivalry aside in a collaboration to remind the world of those who battle daily to overcome the devastation wrought one year ago by a deadly hurricane.

Faculty and staff from U-M and Notre Dame have come together to present “Listening to Puerto Rico,” a free online global learning teach-out offered jointly by the two institutions.

“The University of Michigan’s public mission calls for us to advance human understanding and contribute to a better society,” said U-M President Mark Schlissel. “We are proud to partner with Notre Dame to examine a complex national tragedy, learn from the people of Puerto Rico, and discover new ways for our community to help with the ongoing recovery.”

The online learning opportunity features the voices of residents as well as a number of historians, educators, and civic and business leaders, who will focus on life on the island almost a year after Hurricane Maria made landfall Sept. 20, 2017.

The teach-out series is modeled after the first teach-in that began at U-M in the 1960s. Faculty that wanted to protest the Vietnam War decided an effective way to do so was through an intellectual pursuit, so they organized a marathon session featuring several speakers. The idea caught on and was replicated across the country at 35 other institutions.

The U-M Office of Academic Innovation created the teach-out series in 2017 as a way to engage a global audience in contemporary topics online. The series has featured a range of events that are free, short-form, self-paced learning opportunities on topics such as fake news, sleep deprivation, the opioid crisis, crisis at the border and extreme weather.

The current teach-out—the first to involve two universities—is focused on Puerto Rico’s resilience in the wake of Maria and the concern among residents that the U.S. territory, still in recovery, remains vulnerable as the current hurricane season is underway.

Along with this online event, each university is planning campus activities, including teach-ins, to encourage students, faculty and staff to engage in conversation around the social, political, economic, environmental and humanitarian issues represented by the crisis in Puerto Rico.

Hurricane Maria caused more than 1,400 deaths, an estimated $90 billion in damage and left many of the island’s 3.3 million inhabitants without electricity, drinkable water and shelter for months after the storm. 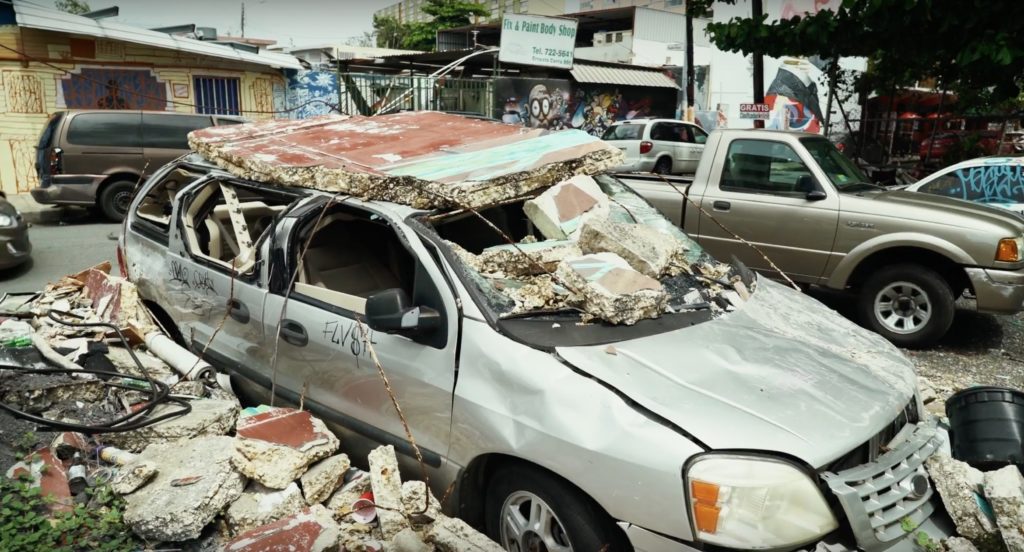 In June, faculty, staff and students from U-M and Notre Dame traveled to the island to gather individual stories and learn how communities have banded together in response to environmental, economic and public health challenges. 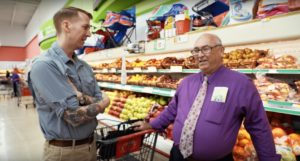 These stories will be combined with expert videos from faculty who are involved in research, education and service with the island and its people.

“What I hope for the most is to help create awareness about Puerto Rico in terms of its past, present and future. At this point in history, when the island is facing a serious debt crisis and the devastating impact of a hurricane, Puerto Rico not only needs the help of its people, but also that of allies,” Moreno said. “What this process has demonstrated is the tremendous potential that we—our two great universities—have to promote awareness and justice. We can be a force for good together.” 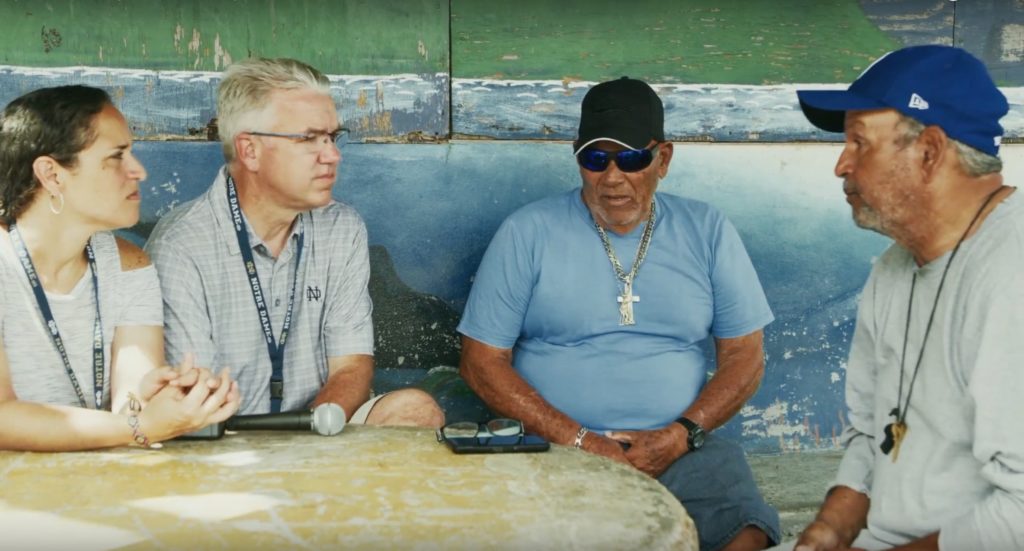 Almost a year after Maria, emergency management leaders say power is restored, many houses have been rebuilt and essential services largely are intact in more populous areas, but the team found a different story in remote communities.

U-M School of Public Health doctoral student and Puerto Rico native Amilcar Matos-Moreno tells about an elderly couple living in the mountainous area of Orocovis, 40 miles outside of San Juan. The couple had just gotten power back two weeks before Matos-Moreno and his team traveled the two hours up the mountain in June to put up a roof and install a safe front door and appliances in the home. Following the hurricane, the elderly man had patched the house back together with scraps that had blown into the area.

“The owner had actually grabbed whatever was lying around. The doors they had were not safe at all,” Matos-Moreno said. “The couple did not receive government help with rebuilding because they were so far from any center. The government told them that.”

They did receive funding for the building materials and appliances, he said.

Among the interviews is one with a Federal Emergency Management Act official who explained what has taken place to restore essential services and facilities on the island. He acknowledged additional work could take another five to 10 years to fix an infrastructure that has been put back together with “Band-Aids.” 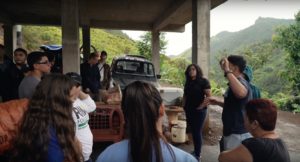 Amilcar Matos-Moreno, PhD candidate at the School of Public Health, gives directions to a group of students from the University of Michigan and Eastern Michigan University as they work to rebuild a house destroyed by Hurricane Maria.

Lawrence La Fountain-Stokes, associate professor of Spanish and American culture at U-M and a member of the team, called the situation there a “different normal.”

He talks about going down a few days after Maria to take his 88-year-old mother away from her badly damaged home, and his surprise upon returning three months later to find little change.

“There are still people who have no electricity, who are homeless, who have lost their jobs. The hurricane came to intensify a crisis that had already been going on for at least 12 years and possibly for more time,” La Fountain-Stokes said in reference to the ongoing economic struggle in Puerto Rico.

Among the stories, the team heard from a physician who chose to stay when many health care professionals left, a journalist who kept questioning official accounts of the death toll, a faculty member from the University of Puerto Rico who explained the compounding economic toll caused by the hurricane, an entrepreneur whose online business was disrupted by the power outage, and several other residents who organized grassroots efforts to help others.

The teach-out team says what comes through the interviews is a story of great resilience.

“This, for the most part, is not a place where people base their happiness on economic stability or well-being,” Anderson said. “Instead, Puerto Ricans have managed to weather many storms, so to speak—Spanish colonization, U.S. imperialism, several major economic crisis, devastating hurricanes—by maintaining a positive outlook, placing great importance on family and friends, loving and embracing their island and its culture, and sticking together when times are tough.”

Participants can register for the free teach-out online beginning Aug. 27. “Listening to Puerto Rico” will be available until Sept. 24.