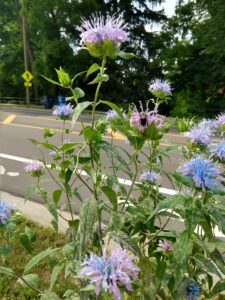 A bumblebee visiting a wild bergamot (Monarda fistulosa), one of two species of insect-pollinated flowering plants used in a University of Michigan study of how roads affect the movement of pollen. Image credit: Chatura Vaidya

Road networks extend some 20 million miles across the globe, and that number is projected to increase by an additional 15 million miles or so by 2050.

Roads can be barriers to wildlife of all sorts, and scientists have studied road impacts on animals ranging from Florida panthers and grizzly bears to box turtles, mice, rattlesnakes and salamanders.

But much less is known about the impact of roads on pollinating insects such as bees and to what extent these structures disrupt insect pollination, which is essential to reproduction in many plant species.

In a paper published online May 10 in the Journal of Applied Ecology, University of Michigan researchers describe how they used fluorescent pigment as an analog for pollen. They applied the luminous pigment to the flowers of roadside plants to study how roads affected the movement of pollen between plants at 47 sites in Ann Arbor, Michigan.

The researchers found that plants across a road from pigment-added plants received significantly less pigment than plants on the same side of the road. The study also suggests relatively simple ways to reduce this road-barrier effect. 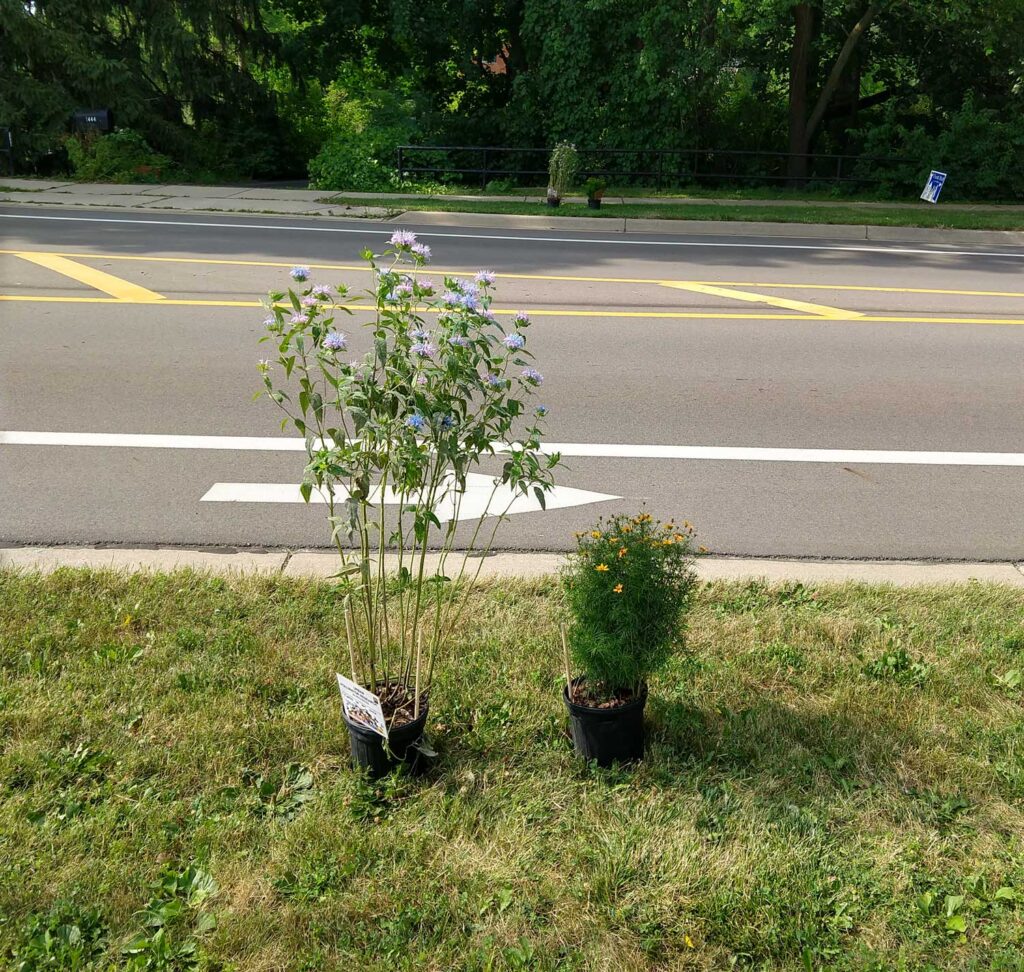 Experimental setup showing both species of flowering plants used in the University of Michigan study of how roads affect the movement of pollen between plants. A wild bergamot (Monarda fistulosa) plant is on the left, and a threadleaf coreopsis plant (Coreopsis verticillata) is on the right. Image credit: Chatura Vaidya

At each site, three potted plants were placed along the roadside on a warm, sunny morning. Luminous pigment was applied to the reproductive structures in the flowers of one plant (the “pigment-added” plant).

At most sites, both species of flowering plants were deployed in this fashion.

The researchers left the plants outside for the day, collected them in the evening, and brought them to a dark location. An ultraviolet flashlight was used to determine how patterns of pigment transfer varied, depending on whether the plants were located on the same side of the road or on opposite sides of the road. 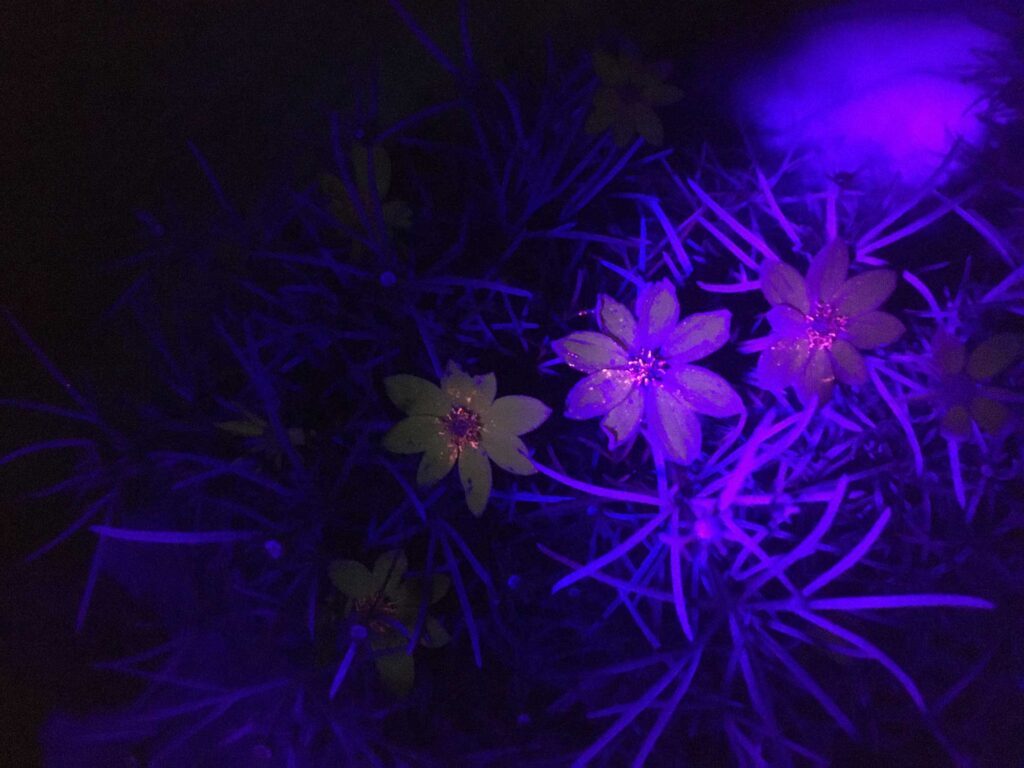 To do this, the researchers counted the number of flowers on each plant that held pigment. Because wind and nonpollinating insects can sometimes transfer pigment, only flowers with pigment on their reproductive parts, not the petals, were counted.

Fitch and Vaidya found that being across the road reduced pigment transfer by 50% for the threadleaf coreopsis plants and by 34% for wild bergamot plants, compared to plants on the same side of the road.

“Ours is the first well-replicated study to examine how roads impact bee movement,” Fitch said.

“Moreover, we used an innovative technique relying on pigment as a pollen analog—rather than direct observation of insect behavior—which allowed us to collect data efficiently. As such, we are also the first to show that roads disrupt the movement of pollen between plants.”

During the study, Fitch and Vaidya observed 65 insect visits to threadleaf coreopsis plants and 356 to wild bergamot plants. Ninety-seven percent of the visits were from bees.

Bees are indispensable pollinators, supporting both agricultural productivity and the diversity of flowering plants worldwide. In recent decades, both native bees and managed honeybee colonies have seen population declines blamed on multiple interacting factors including habitat loss, parasites and disease, and pesticide use.

Pigment transfer across roads with three or more lanes of traffic was rare for either plant species, they found, suggesting that medium-sized and large roads may impede the movement of bees sufficiently to impact foraging and pollination.

The researchers recommend the evaluation and implementation of strategies to make roads less of a barrier to pollinators—without spending huge sums of money to do so.

Wildlife crossing structures that have been used in North America and Europe to facilitate movement of animals through landscapes fragmented by roads include wildlife overpasses, bridges, culverts and pipes.

In a similar fashion, existing pedestrian overpasses could potentially be modified to help bees and other flying pollinators, simply by adding flower-containing planter boxes to the landscaping, Fitch said. He cautioned that such an approach is largely hypothetical and is untested.

Such measures could potentially dovetail with efforts in some cities to promote alternative modes of transportation and to reduce traffic accidents by using so-called road diets. This increasingly popular design strategy reduces the amount of a roadway dedicated to vehicular traffic through, for example, the addition of bicycle lanes or wider sidewalks.

“Since road width and traffic volume were major predictors of pigment transfer in our study, this suggests that road diets could also help reduce the effects of roads on flying insects, particularly if they included pollinator-friendly plantings,” Fitch said.