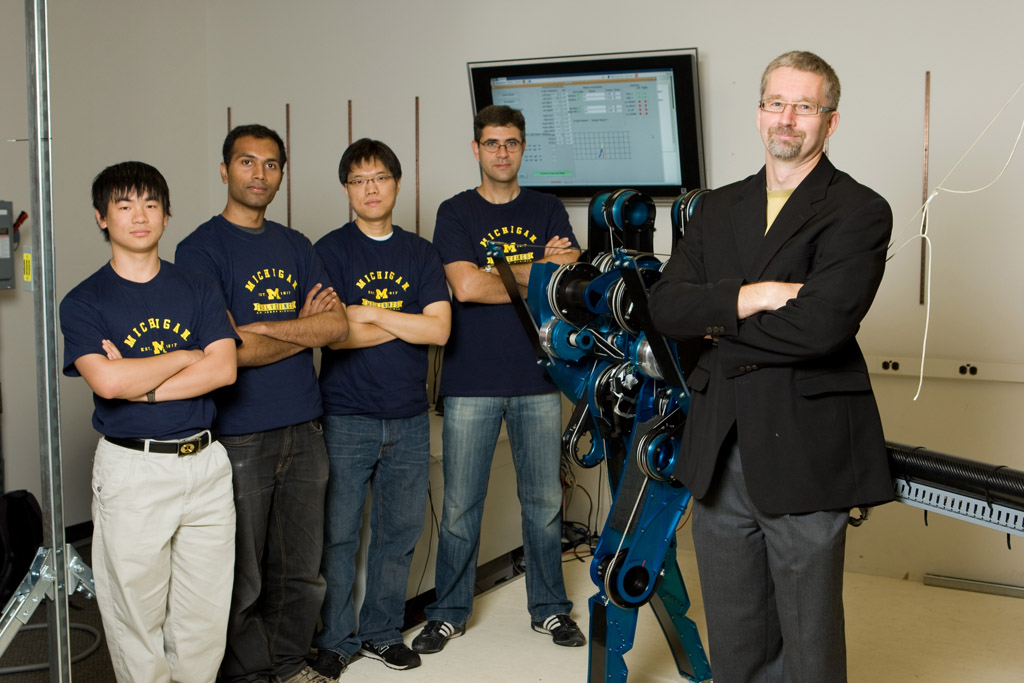 Jerry W. and Carol L. Levin Professor of Engineering Jessy Grizzle with MABEL and members of the Control Systems Lab. Credit: Martin Vloet, U-M Photo ServicesANN ARBOR—A robot in a University of Michigan lab can run like a human?a feat that represents the height of agility and efficiency for a two-legged machine. With a peak pace of 6.8 miles per hour, MABEL is believed to be the world’s fastest bipedal robot with knees.

“It’s stunning,” said Jessy Grizzle, a professor in the Department of Electrical Engineering and Computer Science. “I have never seen a machine doing a motion like this.”

MABEL was built in 2008 in collaboration with Jonathan Hurst, who was then a doctoral student at the Robotics Institute at Carnegie Mellon University. Grizzle and U-M doctoral students Koushil Sreenath and Hae-Won Park have spent the years since ratcheting up MABEL’s training. They’ve been progressively improving the feedback algorithms that enable the robot to keep its balance while reacting to its environment in real time.

MABEL started off walking smoothly and quickly over flat surfaces. Then it moved on to uneven ground. It took its first real jog in late July, and with that, Sreenath met the ultimate goal of his research just days before he was scheduled to defend his thesis.

Few robots can run, and the researchers say no machine but MABEL can do it with such a human-like gait. Its weight is distributed like a person’s. It has a heavier torso and light, flexible legs with springs that act like tendons. MABEL is in the air for 40 percent of each stride, “like a real runner,” Grizzle said. Other running robots are almost speed-walking. Their so-called flight phase when both feet are off the ground lasts for less than 10 percent of each step.

“We envision some extraordinary potential applications for legged robot research: exoskeletons that enable wheelchair-bound people to walk again or that give rescuers super-human abilities, and powered prosthetic limbs that behave like their biological counterparts,” said developer Hurst, who is now an assistant professor in the Department of Mechanical, Industrial and Manufacturing Engineering at Oregon State University.

Two-legged robots with good running form would also have the advantage of being able to travel over rough terrain and inside places built for humans. They could one-day serve as robotic soldiers or rescuers, the engineers say.

“The robotics community has been trying to come up with machines that can go places where humans can go, so a human morphology is important,” Grizzle said. “If you would like to send in robots to search for people when a house is on fire, it probably needs to be able to go up and down stairs, step over the baby’s toys on the floor, and maneuver in an environment where wheels and tracks may not be appropriate.”

Wheels are a great way to move across flat surfaces, Sreenath said, but when the ground gets rocky, two legs are much more efficient.

“Imagine a future where you don’t have to first clear a path and build roads before a vehicle could move around,” Sreenath said, “but rather, we have a class of running machines like animals that could transport you around with no roads, but with a smooth and efficient ride.”

Watch MABEL run at http://www.youtube.com/watch?v=xlOwk6_xpWo. The bar it’s attached to merely guides it to move in a circle. You’ll see it speed up and then abruptly slow down several times. Its controller does this on purpose.