Safe busing during COVID-19: The science behind U-M’s changes

In an effort to design a safe campus bus system for the fall semester in light of COVID-19, University of Michigan researchers simulated how aerosol particles exhaled from passengers sitting in any seat would travel through the vehicle under different conditions.

That’s just one facet of the broad-based work engineering researchers have undertaken in recent months to quantify risks and provide data to inform university busing decisions. 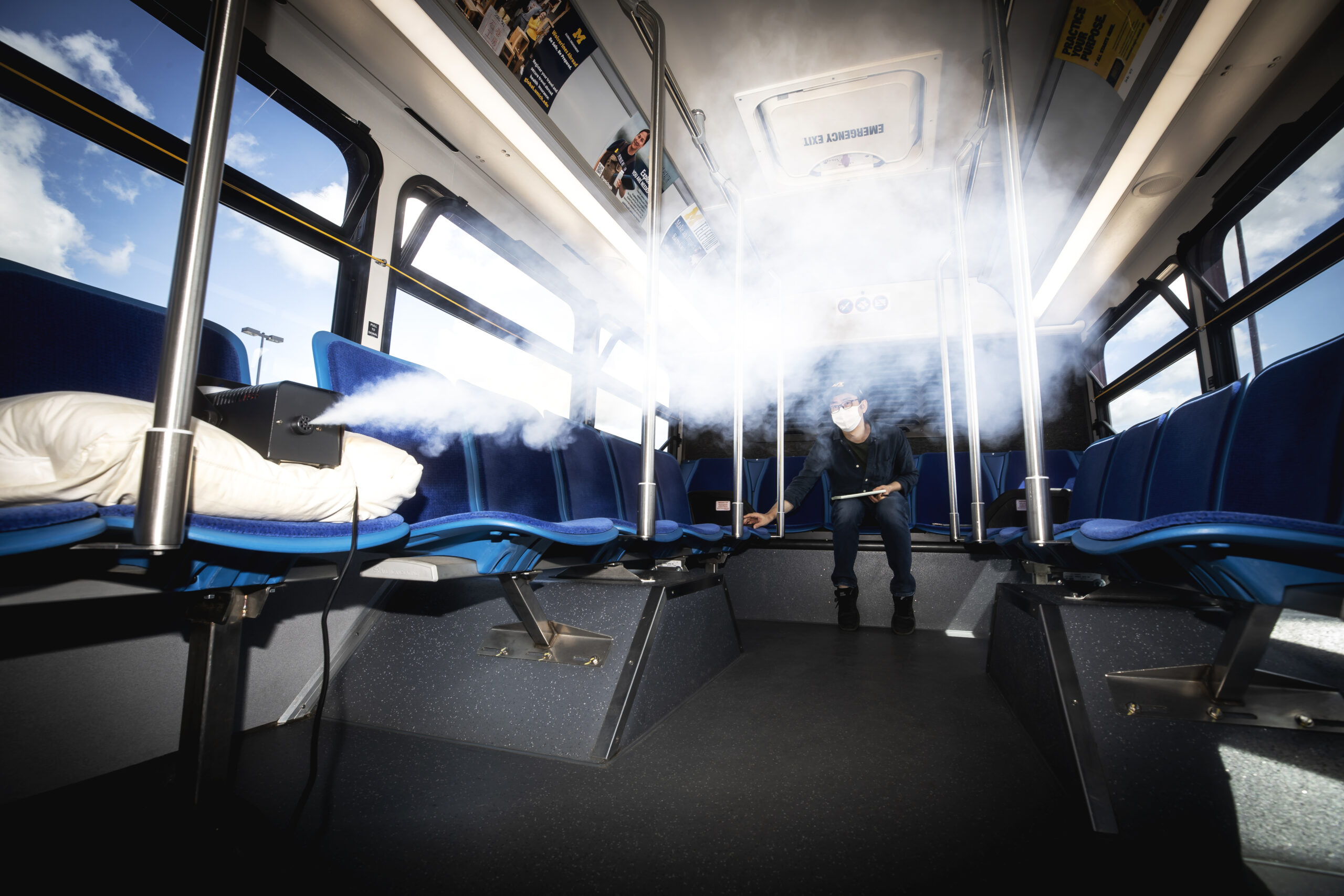 After considering the researchers’ conclusions, U-M announced recently that beginning Aug. 24, all bus riders and drivers must wear face coverings, windows will remain open, capacity will be reduced to nearly half and all previous routes will be replaced by a high-frequency hub-and-spoke routing system, among other changes.

The research team, which involved faculty from across the College of Engineering, explored how to apply public health guidance that riders should wear masks and limit the length of each trip to 15 minutes or less.

Shortening rides presented a challenge, as the pre-COVID bus system used long routes designed to minimize transfers. So they turned to Siqian Shen, an associate professor of industrial and operations engineering, who studies design and optimization of complex systems, including transportation networks.

Shen and her team employed mathematical modeling and optimization techniques to design a hub-and-spoke system of direct routes with fewer stops. Not only does it keep rides under 15 minutes, it enables more frequent service with the same number of buses, reducing wait times as well as the number of passengers on each bus.

We conducted a wide range of simulation tests based on possible demand patterns in the fall semester. Our results show that the new design can satisfy peak-hour demand, and will help passengers stay safe by having all routes shorter than 15 minutes
Siqian Shen

“We conducted a wide range of simulation tests based on possible demand patterns in the fall semester. Our results show that the new design can satisfy peak-hour demand, and will help passengers stay safe by having all routes shorter than 15 minutes,” Shen said. “Most passengers will still only take one bus to reach their destination and all passengers can find nearby bus stops within five minutes’ walk of their starting and ending locations.” 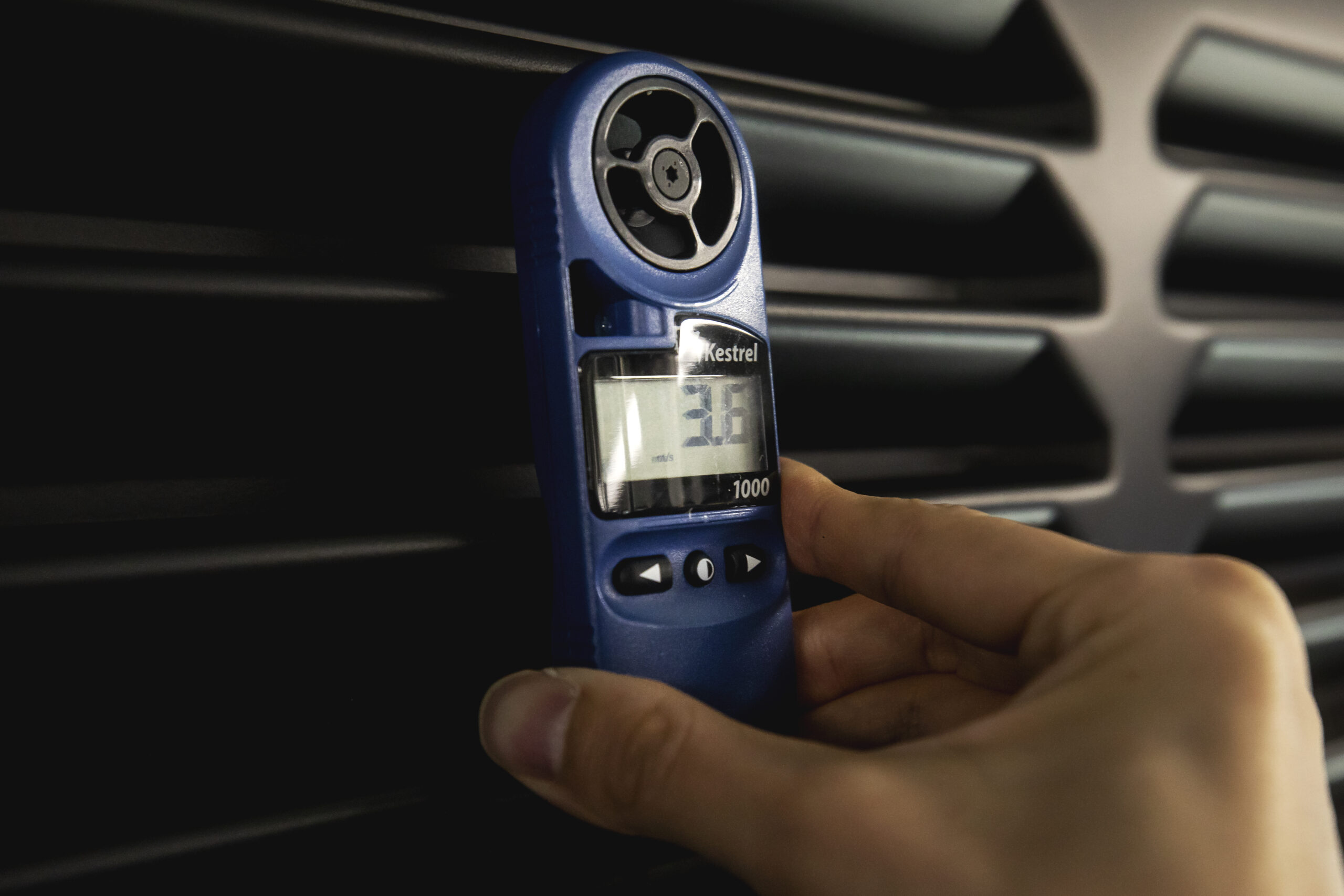 Aerosols are liquid droplets in air that can be potential conduits for the coronavirus. A team of Michigan Engineering researchers are measuring and modeling the concentration and dispersion of aerosols in buses in order to learn how to better filter them and keep users safe. Image credit: Joseph Xu, Michigan Engineering

Next, the team worked to quantify and reduce risks to passengers and drivers. They wanted to know more about exactly how any virus particles would travel around the bus and how to slow their spread. They knew that COVID-19 is transmitted mainly through tiny, aerosolized droplets infected people expel, but beyond that, the science is thin because the virus itself is so new.

“We’ve really only been learning about this virus for the last few months, and in academic terms, that’s a split second,” said Jesse Capecelatro, an assistant professor of mechanical engineering who specializes in “messy turbulent flows” and simulating the behavior of fluids made of two phases of matter—in this case, particles suspended in air.

“There exists very little data on how infectious aerosols are transmitted on a bus, and how different factors contribute to the risk of infection. The most documented case of COVID-19 transmission in a situation like this is from an outbreak on a long-distance coach in Hunan, China.

“Security cameras showed that eight of the 45 passengers were infected, despite not getting in close contact with the infected individual. Based on this and recent research from the literature, we are able to make conservative estimates when defining and quantifying risk.”

While there is still much research to be done on how COVID-19 spreads, public health estimates suggest that the maximum number of particles a person could inhale without getting sick is more than one but less than 1,000, the researchers said.

With that information, Kevin Maki, the Richard B. Couch Development Professor of Marine Hydrodynamics, used his large-scale fluid dynamics expertise to model how many aerosol particles a sick passenger would be likely to expel and how they would travel through the interior of a bus. 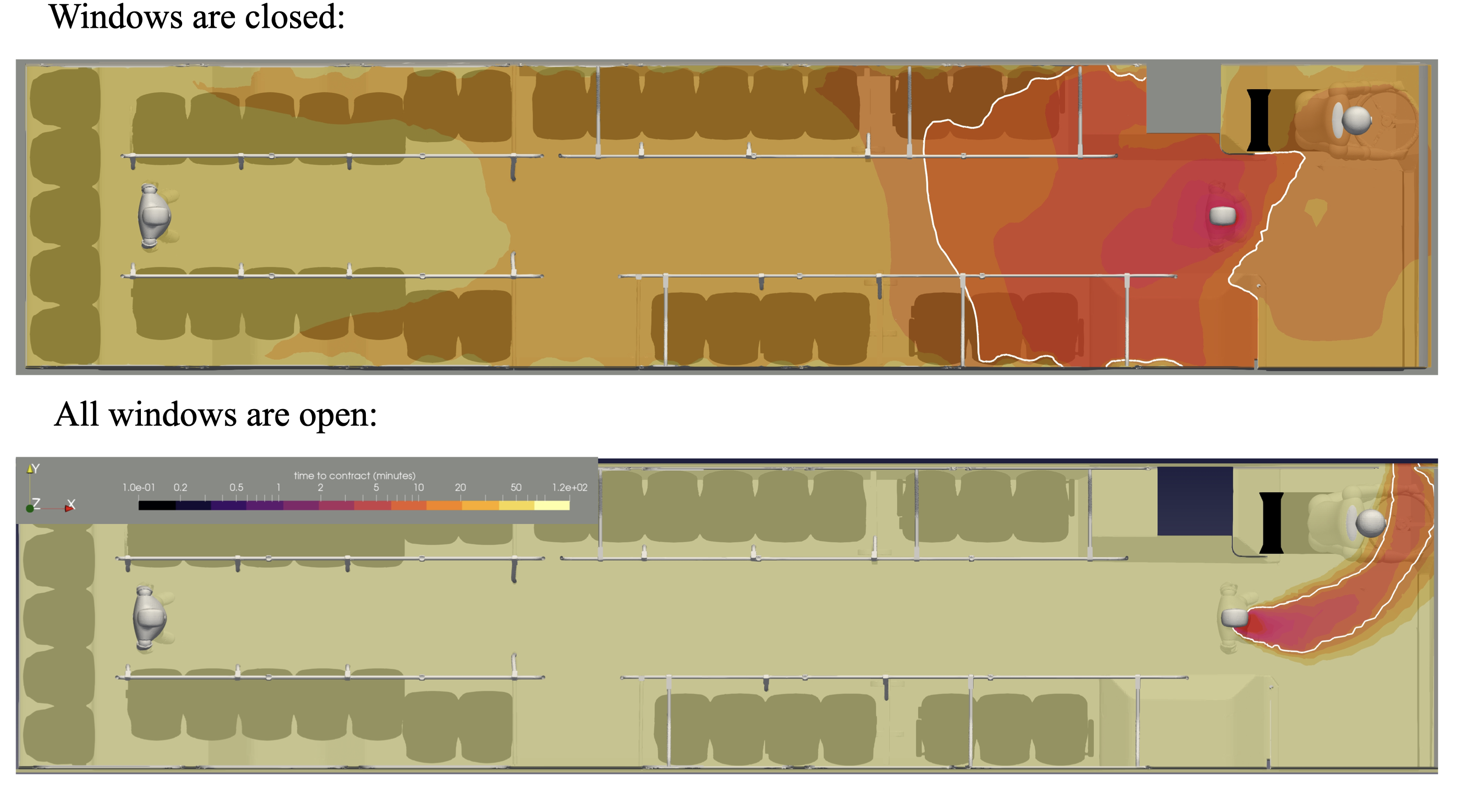 A model showing the concentration and dispersion of aerosols at different parts of a Michigan blue bus with windows open and windows closed. The model was built by a team of researchers who measured the concentration and dispersion of aerosols under a variety of conditions. Image credit: Zhihang Zhang, Jesse Capecelatro, Kevin Maki, Jim Smith, Jason Bundoff

Using both computer models and Boehman’s experimental data, the team then simulated different interventions to measure how they could affect the number of viral particles on the bus—windows open versus windows closed, driving versus stationary, masks versus no masks, and many other scenarios. They also looked for ways to prevent exposure of the driver to aerosols emitted by passengers, as the long hours drivers spend on the bus put them at a higher risk of infection.

The modeling showed that simple measures make a big difference: Opening the windows, for example, cuts aerosol concentrations in half. Wearing masks is the most important step of all, as it confines the travel of particles from a passenger to only a few inches, if the mask is well fitted. And closing the HVAC vent that blows on the driver dramatically reduces their risk of becoming infected.

Ultimately, the team developed a series of interventions that limited the number of infected particles likely to be inhaled on a 15-minute ride. Without these steps, one sick passenger could lead to many others inhaling more than 100 particles—a relatively low number but still worrisome. With the strategies in place, if one sick passenger were to ride, most other passengers would be expected to inhale less than two viral particles on average, and all inhale far less than 100, the researchers said. 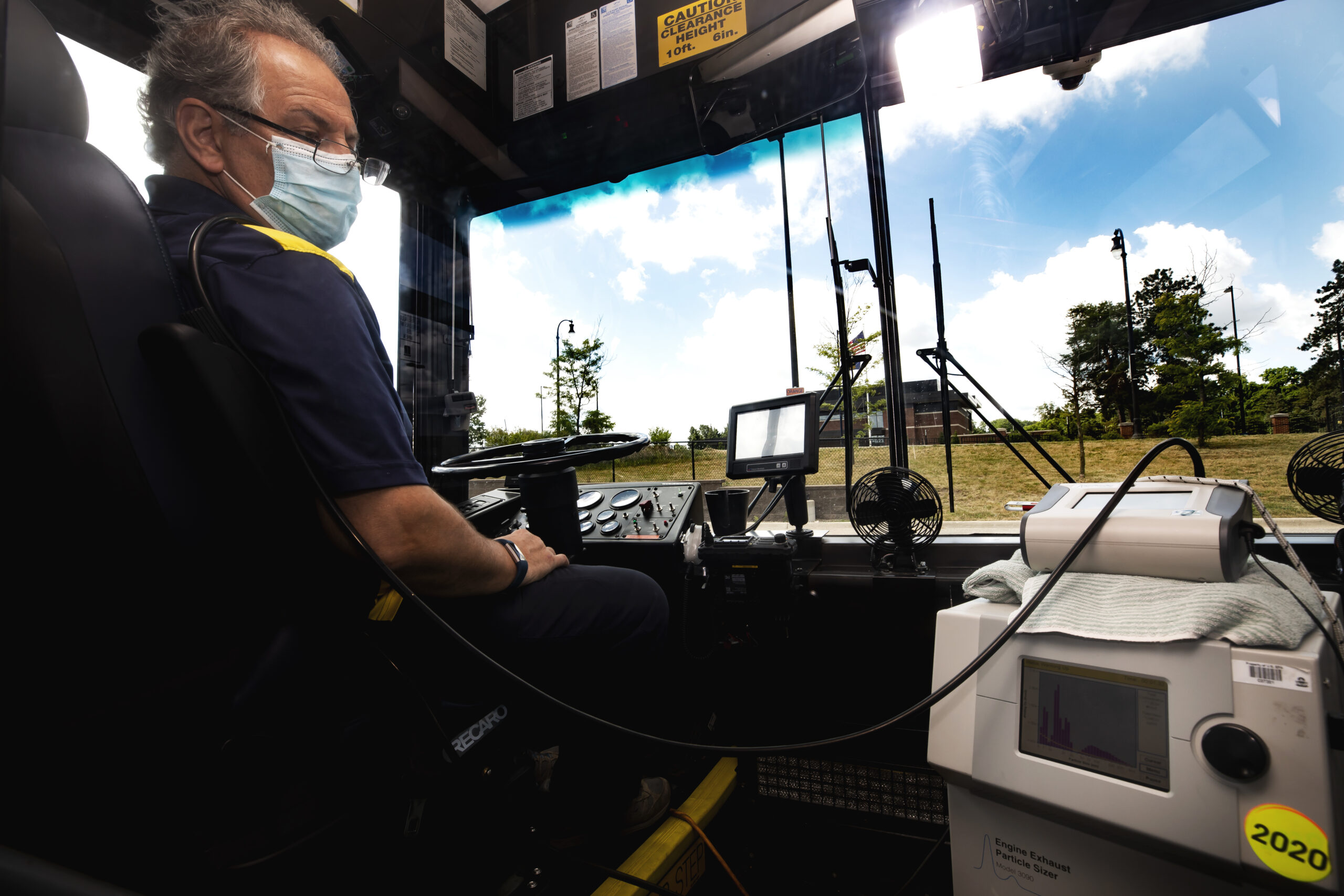 Andre Boehman, ME Associate Professor, and members of his research group test for the flow of aerosols in a University of Michigan blue bus in Ann Arbor, MI on June 24, 2020. Image credit: Joseph Xu, Michigan Engineering

“We looked at each seating position and we modeled how the aerosols we could expect to be emitted from an infected passenger travel through the bus, and how many aerosols each passenger would be likely to inhale on a 15-minute ride,” Maki said.

“Our simulations show that on a 15-minute bus ride, if you’re wearing a mask, you’re at very, very low risk with the changes that are being implemented. If everyone is wearing a well-fitted mask, you could pack in very tightly and still be safe, at least for the length of time of the new bus routes.”

The task of turning the team’s findings into a working bus system fell to Steve Dolen, the executive director of U-M Logistics, Transportation and Parking. Dolen led the reconfiguration of buses to accommodate a reduced capacity of 40 passengers, the installation of partitions between drivers and passengers, the deployment of a group of volunteer bus stop greeters to enforce mask mandates and a raft of other changes.

“A tremendous amount of work has gone into planning for the fall semester and it has been a truly collaborative effort led by a great team in the College of Engineering,” Dolen said. “They were committed from the beginning of the effort to help us solve how we would operate.”