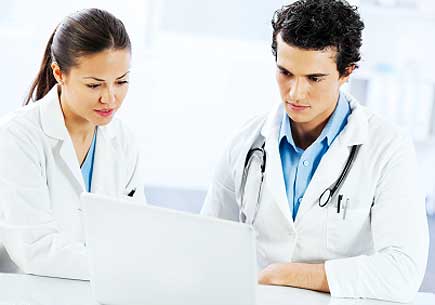 ANN ARBOR—At hospital shift changes, doctors and nurses exchange crucial information about the patients they’re handing over—or at least they strive to. In reality, they might not spend enough time talking about the toughest cases, according to a study led by the University of Michigan.

These quick but important handoff conversations can have a major effect on patient care in the early parts of a shift. More than a half billion of them happen in U.S. hospitals every year, and that number has substantially increased with enforcement of work-hour regulations. Studies have shown that miscommunication during handoff conversations is a major contributing factor in preventable medical errors.

The new analysis of 23 handoff sessions involving 262 patients at a Canadian hospital revealed that doctors tend to use excessive time on early cases and rush at the end of the list, even though the last cases on the list might warrant more of their conversation time. The study authors suggest that doctors talk first about the patients that require the most discussion.

“I would expect that people could shift to talking about the sickest patients first, or the most unfamiliar or complex case. There isn’t a one-size-fits-all remedy except to say the person handing off should begin by making a judgment of which patients need the most time,” said Michael D. Cohen, lead author of a paper on the work published online Nov. 12 in Archives of Internal Medicine.

“Hundreds of millions of handoffs happen in U.S. hospitals every year. Just an increase of one-tenth of 1 percent in their effectiveness could translate into a large number of prevented injuries and lives saved.”

At many hospitals today, doctors and nurses handing over multiple patients discuss them in essentially random order. They might go down a list organized alphabetically or by bed number, rather than by severity of illness. So the last case on the list could very well be most complicated. Nevertheless, Cohen often noticed people rushing at the end. It didn’t surprise him.

“Social scientists have long known that people are often inefficient in allocating time in the early phases of tasks,” said Cohen, the William D. Hamilton Collegiate Professor of Complex Systems, Public Policy and Information at the U-M School of Information who has also spent time shadowing doctors and nurses.

In this study, he and his colleagues analyzed video of patient discussions between highly experienced intensive care physicians at Kingston General Hospital in Ontario. Doctors turned over between six and 23 patients in each of nearly two dozen sessions. They spent an average of 2.5 minutes per patient, but that varied widely. Physicians handing off median-sized groups of 11 patients spent at least 50 percent longer discussing the first case than the last. The average time per patient declined steadily as doctors moved down the list, which was ordered by room number.

Research on patient safety breakdowns in hospitals has often implicated handoff conversations, but training has only recently begun to be offered. Even so, these best practices focus on how to hand over one patient, not a group of them. Cohen believes a better approach would reflect the reality that in most cases, handovers happen in batches. The resulting “portfolio effect,” as he calls it, could weigh on patient safety.

The Institute of Medicine estimates that preventable medical errors account for 98,000 deaths in the U.S. each year, making it the sixth-leading cause. Studies have shown that in many of these cases, handoff miscommunications was a major contributing factor.

As the hourglass runs out, important nuance can get left out, says Dr. Rajesh Mangrulkar, associate dean for medical student education at the U-M Medical School. Mangrulkar has studied handoffs, implemented handoff training at U-M and was one of the first doctors to work with Cohen on identifying how they might be improved about a decade ago.

“We need to do a better job in communicating the important pieces of information like clinical judgment, like saying, ‘This is something I’m really worried about,'” Mangrulkar said. “When you get to the end of the list, if you just spend a little bit of time on a patient, you’re not going to communicate that.”

Beyond clinical judgments, Cohen has seen pivotal details omitted. Perhaps the patient received a dose of medication off schedule. That might be apparent in the chart, but not without looking in a couple different places. Perhaps someone has an unexplained symptom. The doctor might default to a cleaner narrative, leaving that symptom out. But what if the initial diagnosis was wrong?

Cohen hopes that further research can show a correlation between fewer medical errors and prioritizing handoff conversations. In the meantime, though, it might be worth trying this new approach.

“I believe in this finding,” Cohen said. “Hundreds of millions of handoffs happen in U.S. hospitals every year. Just an increase of one-tenth of 1 percent in their effectiveness could translate into a large number of prevented injuries and lives saved.”

The paper is titled “The Earlier, the Longer: Disproportionate Time Spent on Patients Discussed Early in Attending Physician Handoffs.” Also contributing are researchers from Kingston General Hospital in Ontario, Queens University School of Medicine, Brigham Young University and the University of Toronto. The work was funded by the Robert Wood Johnson Foundation and the Physicians Services Inc. Foundation. The Kingston Hand-off Video Databank is available for other researchers.