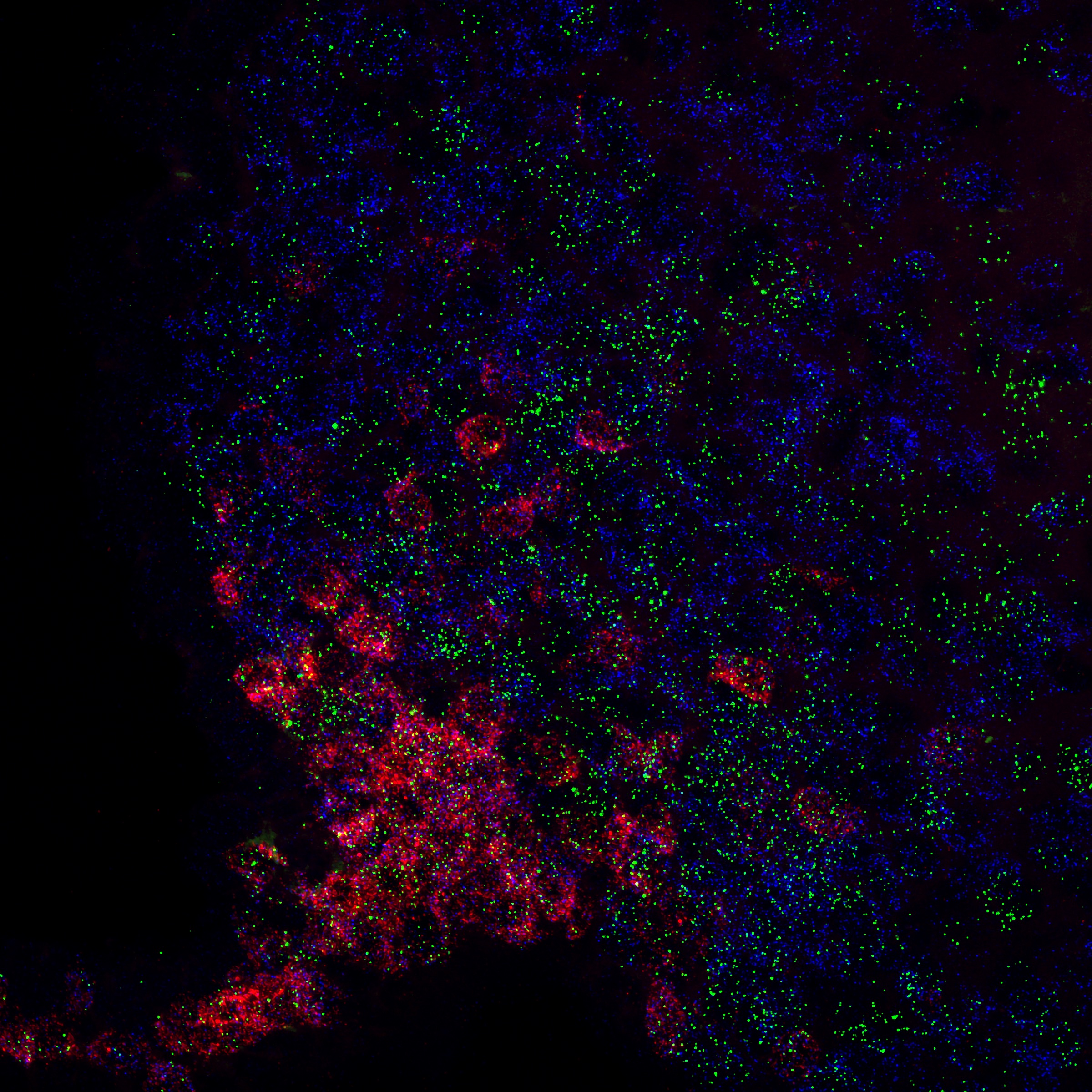 Melanocortin 3 receptor (MC3R; green), agouti-related protein (AgRP; red), and vesicular GABA transporter (VGAT; blue) mRNA expression in the arcuate nucleus of a mouse. MC3R is coexpressed in a high percentage of both AgRP and VGAT neurons in the arcuate nucleus, a brain region that is known to control feeding in both mice and humans. Image credit: Michelle Bedenbaugh, Vanderbilt University School of Medicine

Scientists have identified a potential drug target for treating obesity and eating disorders such as anorexia nervosa, a condition for which no therapeutics are currently available.

In a new study published in Science Translational Medicine, a team of researchers from the University of Michigan and Vanderbilt University pinpoints a protein called melanocortin 3 receptor (or MC3R) as an avenue for accessing the brain circuitry that controls the body’s energy balance and food intake.

The research, conducted in mice, offers preliminary evidence that manipulating the MC3R can either stimulate or suppress food intake.

The MC3R sits on the surface of neurons, where it sends and receives signals about the overall energy balance in the body. Although this protein is found throughout the brain, it is particularly prevalent in brain regions that are known to control feeding in both mice and humans.

“There are two main regions of the brain that receive all of the peripheral information about body weight and energy balance: the hypothalamus and the brainstem,” said Patrick Sweeney, a neuroscientist at the U-M Life Sciences Institute and one of the study’s lead authors. “What we found is that the MC3R is most heavily expressed in the hypothalamus, where we believe it plays a dominant role in regulating the whole neuronal circuitry that controls food intake.”

From this position in the hypothalamus, the MC3R receives hormonal signals when energy stores are too high and activates neural circuits that suppress food intake; conversely, this receptor can also sense that the body needs more energy and activate pathways to stimulate food intake.

For this study, the researchers examined behavioral and feeding responses in mice that were missing the MC3R protein. They found that the mice exhibited many of the same traits as humans with anorexia disorders. And in some cases, the behavioral responses differed vastly between male and female mice—similar to differences found in humans, in which approximately 90% of anorexia nervosa cases are diagnosed in females.

The team also determined that manipulating the MC3R can alter feeding habits in both directions. When the researchers treated the mice with chemical compounds that stimulate the protein’s activity, the mice exhibited increased feeding habits and reduced anxiety; and compounds that suppressed MC3R led to the opposite effect—reduced food intake, but with no observed increase in anxiety.

If these results translate to humans, the team believes the MC3R has the potential to play a role in treatments for a range of eating and obesity disorders.

“The most exciting part of these results is the fact that MC3R could be a potential therapeutic target for eating disorders such as anorexia, as well as maybe for obesity—which would certainly help the human population if we can make that transition from mice to humans,” said Michelle Bedenbaugh, a neuroscientist at the Vanderbilt University School of Medicine and a lead author of the study.

The researchers emphasize that identification of the drug target in a model organism is an essential but early step in the long process of developing valid therapeutics.

“This gives us a new way to approach this circuitry and a clear focus for drug development efforts,” said senior study author Roger Cone, director of the LSI and a professor of molecular and integrative physiology at the U-M Medical School. “So it is an early step forward in developing drugs, but critical, obviously.”

“The MC3R circuitry has never been visualized like this before, and the scope of neuroendocrine and behavioral circuits engaged significantly expands its importance for energy homeostasis,” said senior study co-author Richard Simerly, professor of molecular physiology and biophysics at Vanderbilt University.

The research was supported by the National Institutes of Health. Sweeney, Gimenez, Williams and Cone hold equity in and are inventors of intellectual property optioned to Courage Therapeutics Inc., a company that aims to develop new therapeutics for eating disorders by targeting melanocortin receptors. Cone chairs the Scientific Advisory Board at Courage Therapeutics.

The study, “The melanocortin-3 receptor is a pharmacological target for the regulation of anorexia,” is available at: DOI:10.1126/scitranslmed.abd6434.