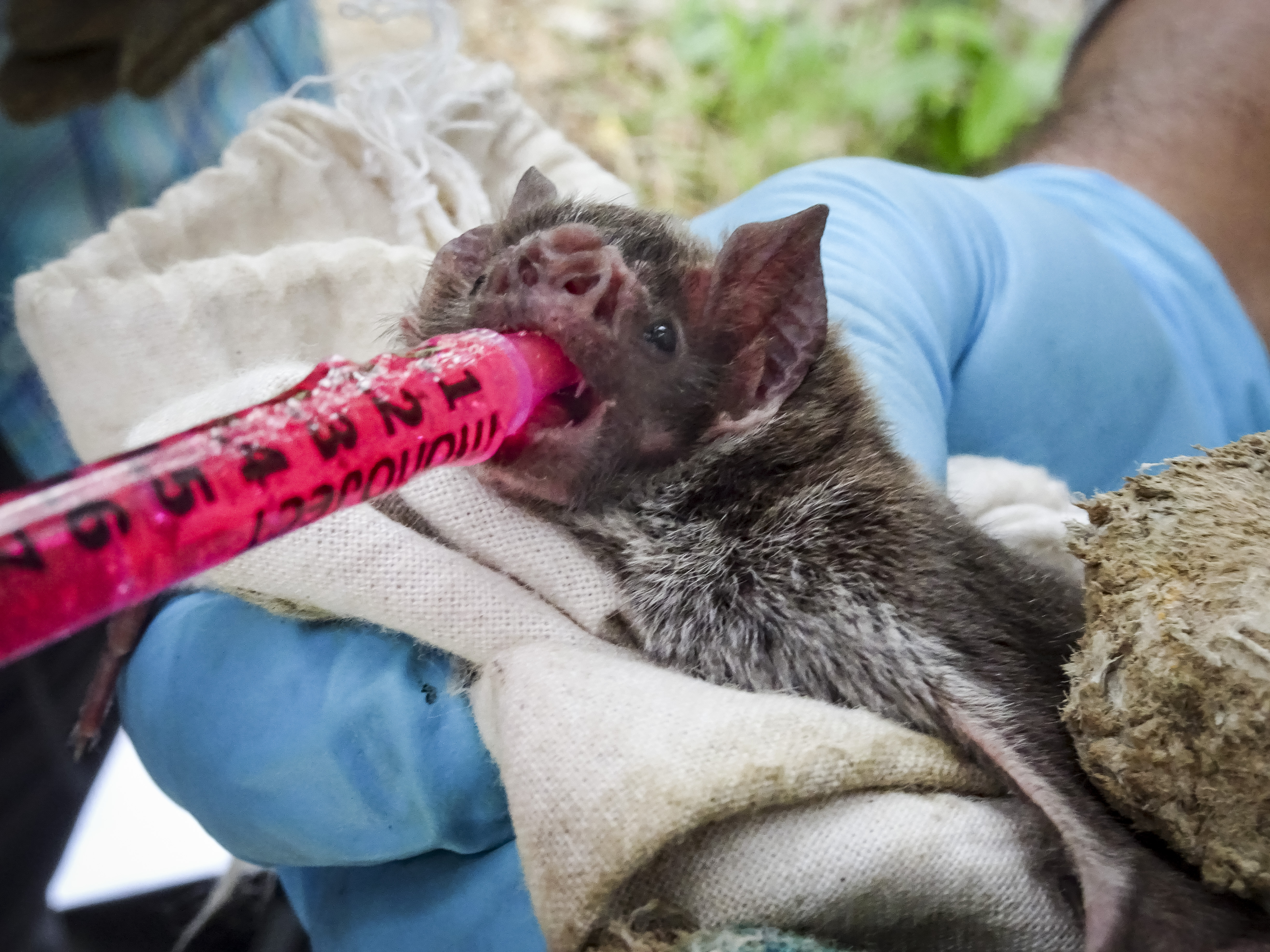 Fluorescent gel is applied to the mouth of a vampire bat in a rural area near Lima, Peru, to test the potential effectiveness of a “spreadable” rabies vaccine. The bright red gel causes bat hair follicles to fluoresce under the microscope, so that researchers can track the spread of the biomarker through the bat population. Image credit: Kevin Bakker

ANN ARBOR—University of Michigan scientists and their colleagues used glowing fluorescent gel to test the potential effectiveness of vaccines to control rabies and other diseases in wild bats.

The study, led by researchers at U-M and the University of Glasgow and published online Nov. 18 in the journal Nature Ecology & Evolution, found that a low-effort vaccination program could substantially reduce rabies transmission in wild vampire bats, thereby reducing the risk of lethal infections in humans and livestock. 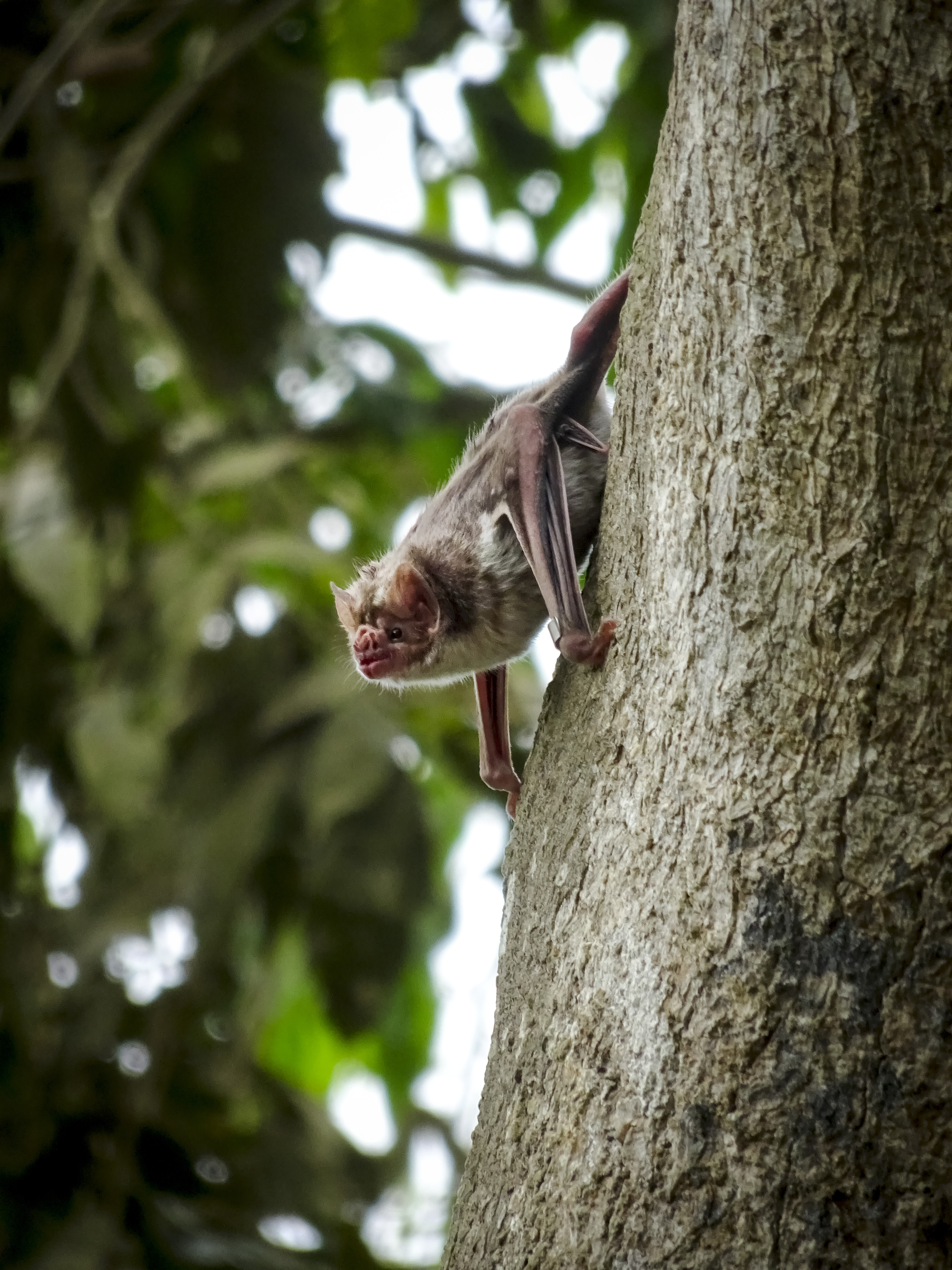 Vampire bat in a tree in a rural area near Lima, Peru. In the study, vampire bats were captured and treated with a fluorescent red gel that simulates an orotopical rabies vaccine. Such vaccines are applied orally and topically and spread between bats during grooming. Image credit: Kevin Bakker

The gel, which contained a fluorescent tracer dye called Rhodamine B, was applied to wild vampire bats at three colonies in Peru, where it simulated the bat-to-bat spread of an orotopical rabies vaccine. Such vaccines—which are applied orally or topically and are then spread between bats through oral contact during grooming—have already been shown to protect multiple bats against rabies for every individual vaccinated in the laboratory, but their levels of spread in wild bats was unknown until now.

When the gel was ingested by bats that groomed each other, it led to fluorescence in the bats’ hair follicles, which was then monitored by fluorescent microscopic analysis of hair samples collected by the scientists.

The study demonstrated that because of bat-to-bat transfer, orotopical rabies vaccines would protect 2.6 bats for every bat that’s vaccinated, compared to a single bat protected by conventional nonspreadable vaccines.

“We provide the first evidence that vaccinating bats could lead to meaningful reductions in human and livestock rabies,” said the study’s lead author, U-M’s Kevin Bakker.

The researchers used mathematical models to show that observed levels of vaccine transfer would reduce the probability, size and duration of rabies outbreaks, even at low but realistically achievable levels of vaccine deployment. 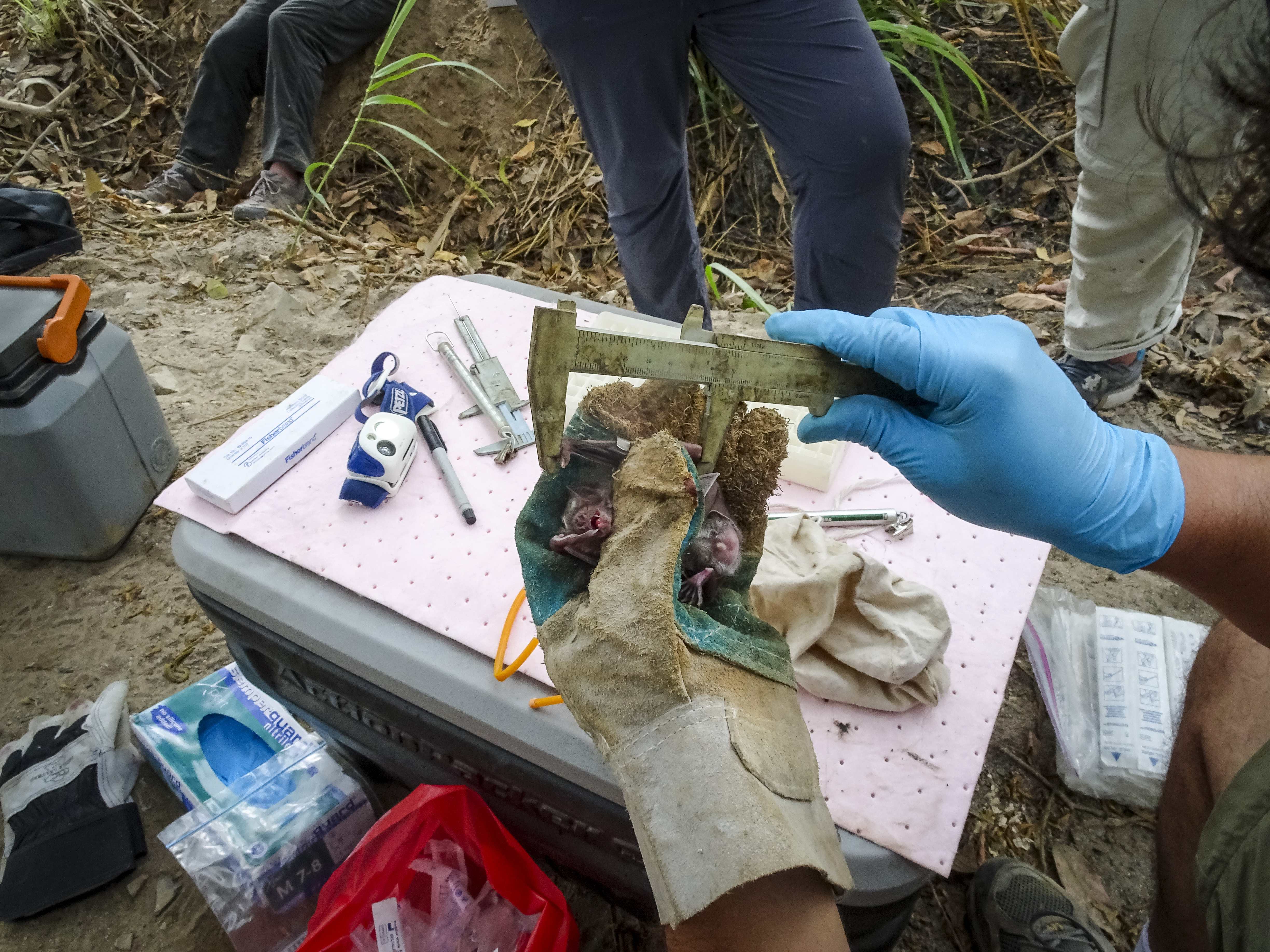 A vampire bat being measured at a rural capture site near Lima, Peru. After the fluorescent gel is applied, the bats are released. Image credit: Kevin Bakker

The models further showed that a spreadable vaccine would control rabies more effectively than the current policy of killing the bats with a poisonous gel that spreads by the same route of contact and grooming.

“We demonstrate why over 40 years of culling vampire bats has failed to contain the disease in Latin America,” said Bakker, a postdoctoral researcher in the U-M Department of Statistics.

“Our mathematical models reveal that bats would have to be effectively eliminated to reduce rabies more efficiently than vaccines, and our field studies imply that this level of culling effort is not practically attainable in real-world campaigns.”

Vampire bat rabies is a lethal viral disease found throughout Latin America. In places where vampire bats routinely feed on human blood, rabies is estimated to cause up to 960 deaths per 100,000 people, while losses from livestock mortality exceed $50 million annually, disproportionately affecting impoverished rural communities. 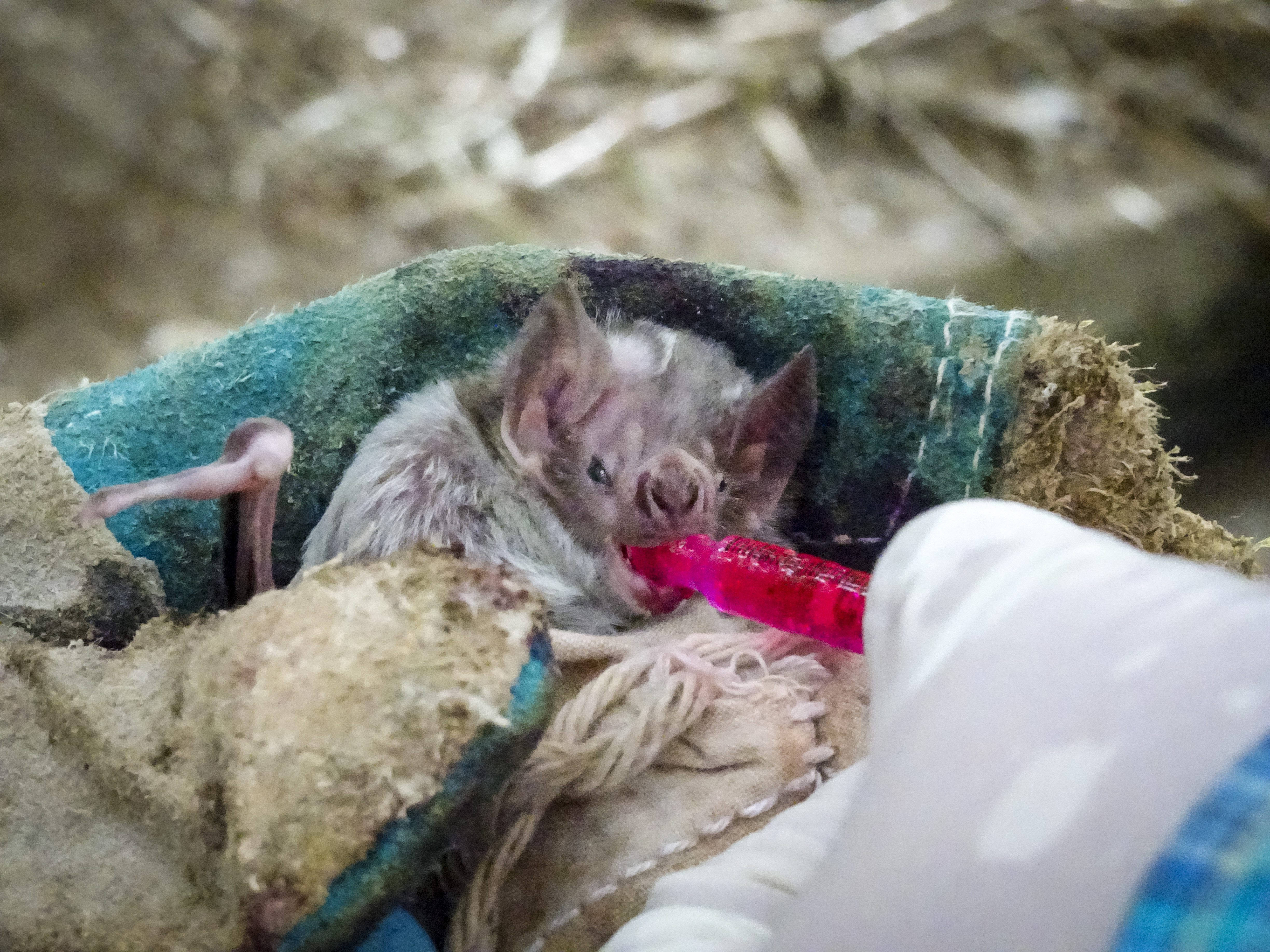 Closeup of fluorescent gel being applied to the mouth of a vampire bat. Image credit: Kevin Bakker

Existing management strategies have been unable to mitigate the burden of rabies, with uptake of protective vaccines for humans and livestock limited by high costs and inaccessibility to remote areas. Another strategy, poisoning the bats to reduce their populations, is controversial and has had mixed results for rabies control.

“Vampire bat rabies still has severe medical and agricultural impacts across North, Central and South America despite decades of efforts to mitigate its burden. Our findings demonstrated that bat-to-bat transfer of oral rabies vaccines could increase population-level immunity up to 2.6 times beyond the same effort using conventional, non-spreadable vaccines,” said Daniel Streicker, senior author of the paper and a senior research fellow at the University of Glasgow’s Institute of Biodiversity, Animal Health & Comparative Medicine and the MRC-University of Glasgow Centre for Virus Research.

“Until recently, controlling diseases in reclusive animals like wild bats seemed unimaginable. Our findings reveal the exciting potential for using a new generation of spreadable vaccine technologies to protect human and animal health by fighting diseases within their wildlife hosts.” 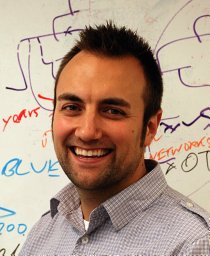 Because rabies relies on vampire bat movement between colonies, a strategic switch from poisoning to vaccination would increase immunity and may lead to a dramatic reduction in rabies across Latin America, said Bakker, who earned a doctorate from the U-M Department of Ecology and Evolutionary Biology in 2017, then completed an eight-month postdoctoral fellowship at the University of Glasgow. He is now a National Institutes of Health Research Fellow in the U-M Department of Statistics.

“Hopefully, this is just the first step in evaluating spreadable vaccines to control disease transmission across a multitude of pathogens and hosts,” Bakker said.

The Nature Ecology & Evolution paper is titled “Fluorescent biomarkers demonstrate prospects for spreadable vaccines to control disease transmission in wild bats.” The DOI number for the paper is 10.1038/s41559-019-1032-x. Once the embargo lifts, the paper will be available at www.nature.com/articles/s41559-019-1032-x.

The study was supported by funding from the Wellcome Trust, the Royal Society and the U.S. National Institutes of Health.

Written by the University of Glasgow.