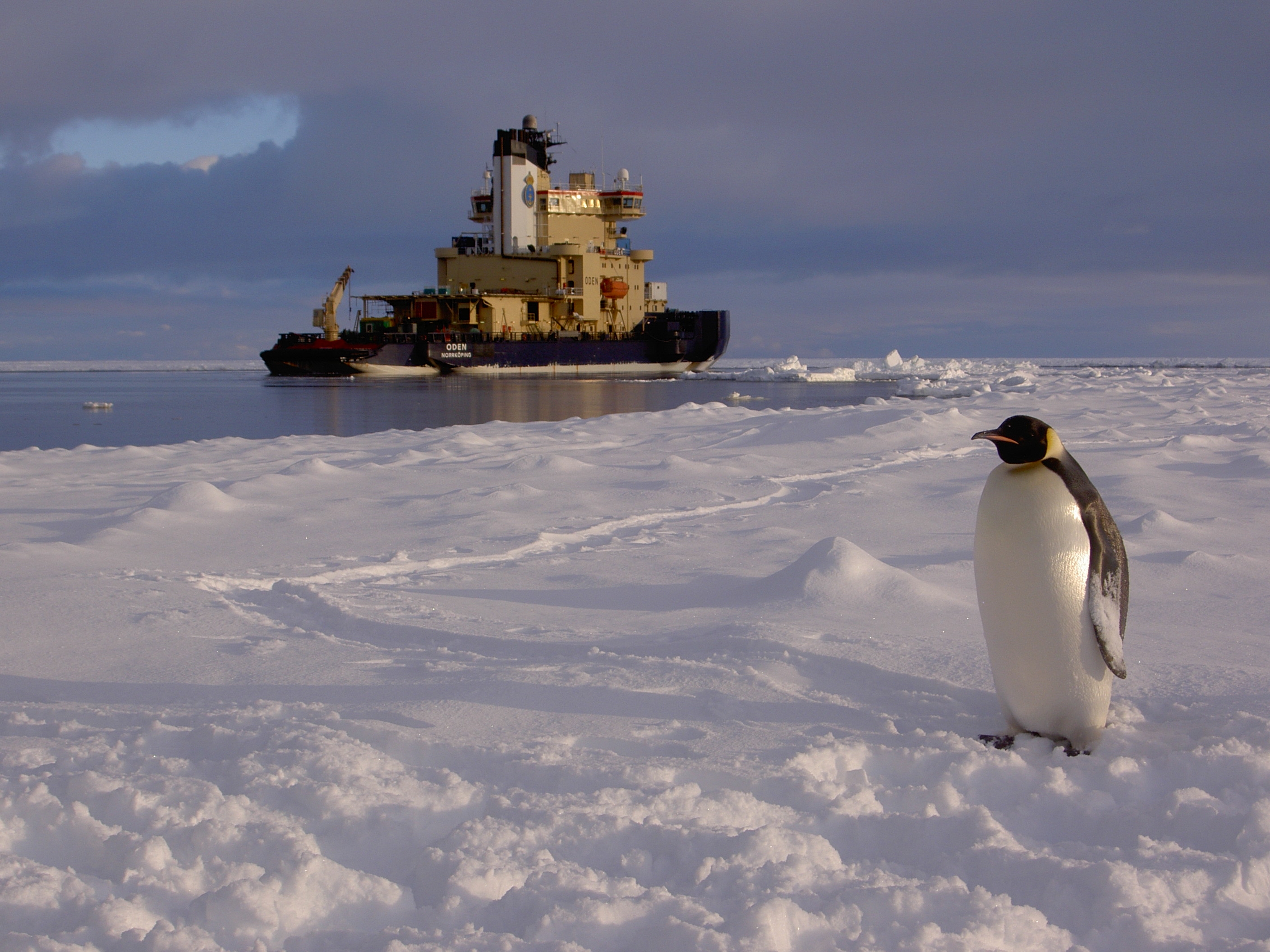 The Swedish icebreaker Oden off the coast of Antarctica, with an emperor penguin in the foreground. Photo by J. Wegelius.ANN ARBOR—An international team of scientists, including a University of Michigan graduate student, has demonstrated that a clear difference exists between the marine microbial communities in the Southern and Arctic oceans, contributing to a better understanding of the biodiversity of marine life at the poles.

The most comprehensive comparison of microbial diversity at both of Earth’s polar oceans showed that about 75 percent of the organisms at each pole are different. This insight sheds light on newly recognized biodiversity patterns and reinforces the importance of studying Earth’s polar regions in the face of a changing climate. And it highlights the need for further research on the impacts of sea ice, seasonal shifts and freshwater input in both regions.

“We believe that significant differences in the environmental conditions at each pole and unique selection mechanisms in the Arctic and Southern oceans are at play in controlling surface and deep-ocean community structure,” said Alison Murray, leader of the international team and an associate research professor at the Desert Research Institute in Reno, Nev. 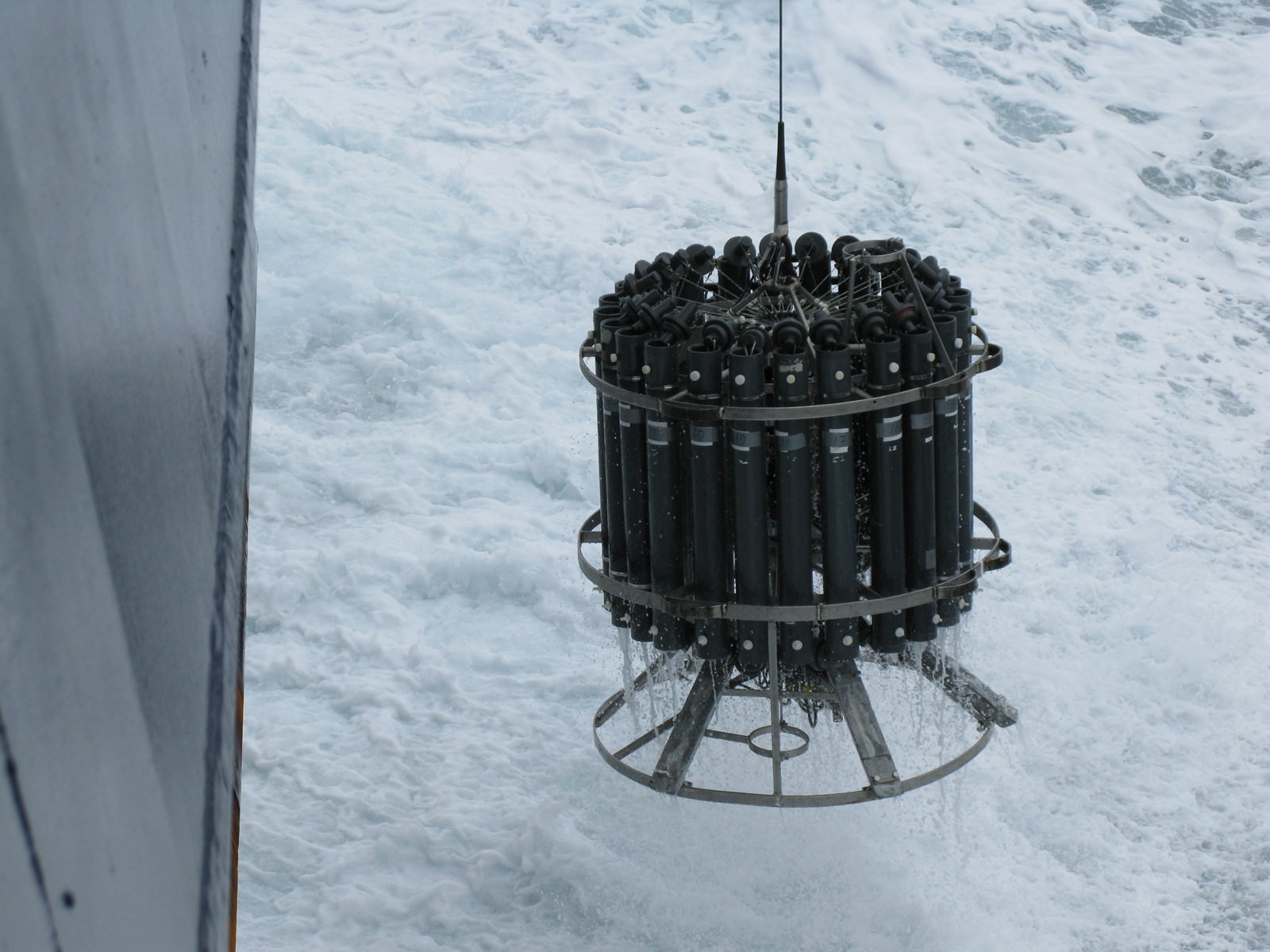 A sample-collecting device called a rosette is lowered into the ocean off the coast of Antarctica. Photo by Lollie Garay.The team reported its findings online Monday in the Proceedings of the National Academy of Sciences.

Kevin Bakker, a graduate student in the U-M Department of Ecology and Evolutionary Biology, is a co-author of the PNAS paper. Before arriving at U-M last month, Bakker conducted molecular and microbial marine science off the coast of Antarctica while working at the University of Georgia.

The scientists found that the differences between the two poles were most pronounced in the microbial communities sampled from the coastal regions, which is “likely a result of the significant differences in freshwater sourcing to the two polar oceans,” said Jean-François Ghiglione, first author of the report and research professor at the French Microbial Oceanography Laboratory.

In the Southern Ocean, glacial melt water accounts for most of the freshwater that flows into the system, Ghiglione said. In contrast, the Arctic Ocean receives much bigger pulses of freshwater from several large river systems with huge continental drainage basins, in addition to glacial melt water.

While the surface microbial communities appear to be dominated by environmental selection, the deep ocean communities are more constrained by historical events and connected through oceanic circulation, providing evidence for biogeographically defined communities in the global ocean. 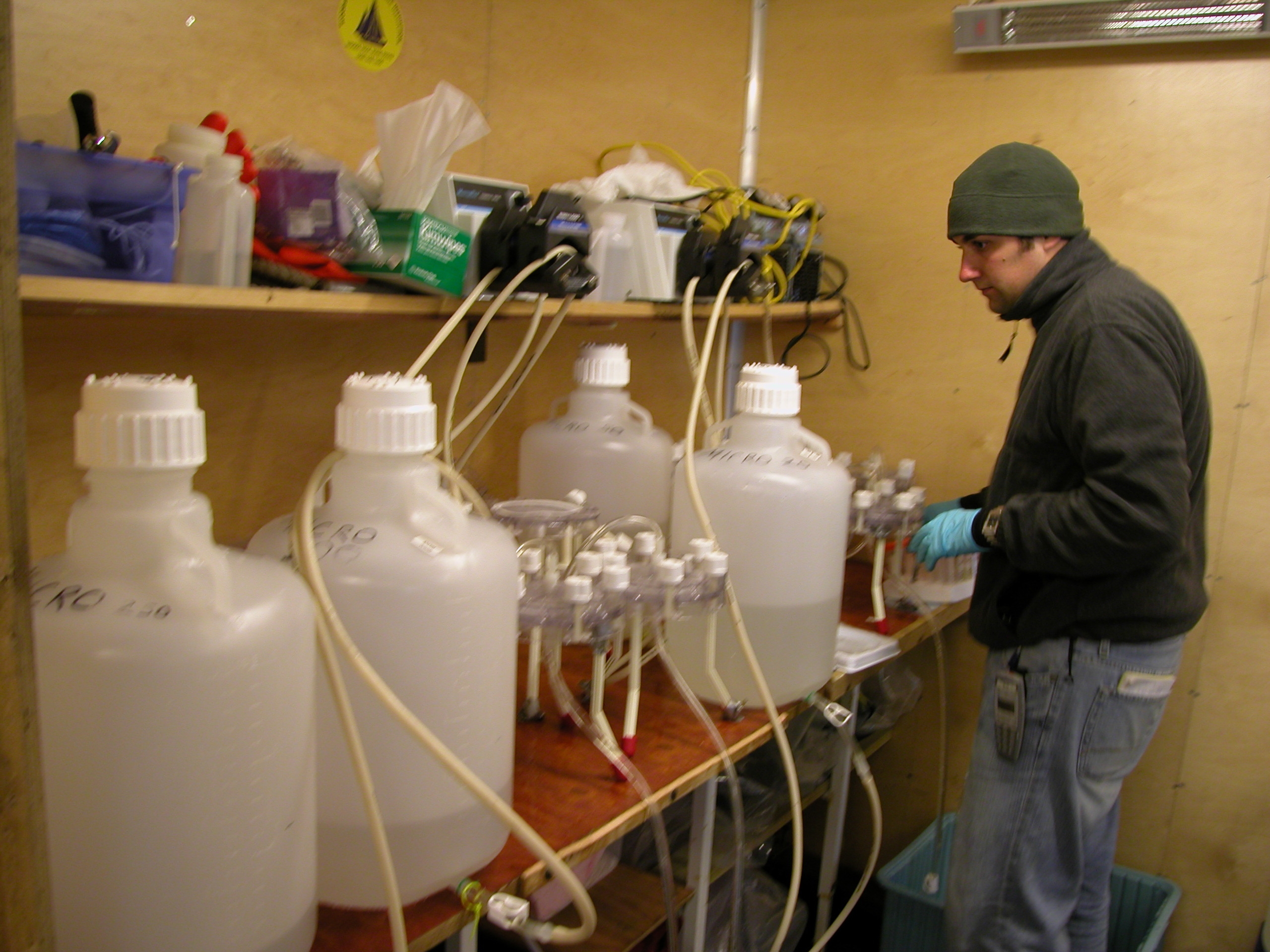 U-M graduate student Kevin Bakker in a laboratory aboard the icebreaker Oden. After collecting water samples, Bakker filtered the water to extract microbial DNA, then sent the genetic material to another lab for sequencing. Photo by Patricia Yager.“Neither latitude nor temperature drove the composition of the surface bacterial communities directly. Rather, short-term effects such as seasonal river input or melting glaciers shaped community composition,” said U-M’s Bakker. “In contrast, it seems like the deep oceans are driven more by long-term changes.”

The collaboration involved scientists from six countries: Canada, France, New Zealand, Spain, Sweden and the United States. The project was made possible through the International Polar Year, a global research campaign, and the Sloan Foundation’s Census of Marine Life Program, which stimulated field efforts at both poles, along with a separate program targeting marine microbes, the International Census of Marine Microbes. In addition, the national polar research programs from each of the six contributing nations, including the U.S. National Science Foundation, supported field expeditions.

“The collective energies required to bring this study to fruition was remarkable,” Murray said. “By using similar strategies and technologies in sample collection through next-generation sequencing, we have a highly comparable, unprecedented data set that for the first time has allowed us to take an in-depth look across a large number of samples into the similarities of the microbial communities between the two polar oceans.”

Scientists compared 20 samples from the Southern Ocean against 24 samples from the Arctic Ocean taken from both surface and deep-water sites. They also included an additional 48 samples from Earth’s lower latitudes to investigate the polar signal in global marine bacterial biogeography.

The researchers specifically compared samples from coastal and open oceans and between winter and summer seasons to test whether or how environmental conditions and dispersal patterns shape microbial communities in the polar oceans. Samples were processed and analyzed by the International Census of Marine Microbes using an identical approach based on pyrosequencing and involving more than 800,000 sequences from each of the 92 samples.

“Our analyses identified a number of key organisms in both poles in the surface and deep-ocean waters that are important in driving the differences between the communities,” Murray said. “Still, further research is needed to address the ecological and evolutionary processes that underlie these unique patterns.”