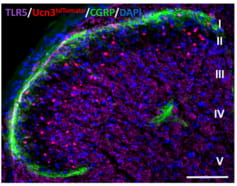 In this image of a spinal cord, components of the neuron circuitry that transmits mechanical itch are lit by fluorescent markers. Image credit: Bo Duan

ANN ARBOR—Take a piece of tissue, twist it into a stiff peak and brush it against the fine hair beneath your lower lip—the sensation creates an itch, but unlike the bite from a mosquito, this is called a mechanical itch.

A University of Michigan team has identified the neuronal pathway, from the skin to the spinal cord, responsible for transmitting this itching sensation, opening the pathway for treating patients with chronic itch.

Researchers think humans evolved the sensation of itch to ward off parasites noodling into our skin. Mechanical itch results from a brush or poking against your skin while chemical itch, such as a mosquito bite, results from activation of the histamine system.

Conditions such as eczema, diabetic neuropathy, multiple sclerosis and cancers can trigger chronic itch in patients—defined as itching that lasts six or more weeks. Currently there are no effective treatments for the condition.

“Our study can help us better understand the neural mechanism of itch, and potentially develop a new strategy to treat chronic itch,” said Bo Duan, a researcher in the U-M Department of Molecular, Cellular and Developmental Biology. “We found this type of neuron is selectively required to transmit mechanical itch, but not chemical itch, suggesting different pathways for different forms of itch.”

Their research, published in the journal Neuron, indicates that the sensation of mechanical itch starts in the skin, with activating a sensory cell called Toll-like receptor 5-positive low-threshold mechanoreceptor, which is activated by the stimulus of a gentle touch. These sensory neurons then pass that message along to a group of neurons called Ucn3 interneurons in the spinal cord.

To narrow down which neurons were responsible for mechanical itch, the researchers focused on nine distinct subsets of spinal neurons in the zone that those low-threshold mechanoreceptors innervate. 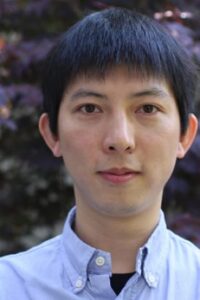 To verify this neuronal circuit was responsible for mechanical itch, the researchers used several different techniques to manipulate the Ucn3 neurons. To trigger mechanical itch in mice, the researchers lightly tickled the mice behind the ear with a tool called a von Frey monofilament. The mice responded by scratching at their ears with the hind paw—scratching at the ear rather than rubbing at the ear indicates itch rather than pain.

In one line of mice, the researchers ablated the neuron. When the neuron was ablated, the mouse didn’t respond to the tool’s tickle. Then, the team injected a chemical itching compound, which still induced the mouse to itch. This indicated that the neuronal pathways are separate, and that the ablated Ucn3 neurons are responsible for mechanical itch.

In another line of mice, the researchers used mouse genetics to silence the neuron. The mouse experienced the same effect: when Ucn3 neurons were silenced, the mouse didn’t feel the mechanical itch. In each of these scenarios, these techniques did not affect the mice’s ability to sense touch, pain or thermal sensation.

Additionally the researchers found that ablating the Ucn3 neurons in the spinal cord prevented the development of mechanical itch sensitization and persistent spontaneous itch in lines of chronic itch mouse models. They also found through electrophysiological study that under chronic itch conditions, the Ucn3 neurons lacked inhibition—or were more prone to being activated.

This means that patients with chronic itch often show extra sensitivity to mechanical itch—that is, the neural pathway for mechanical itch is particularly sensitive. They also are prone to persistent spontaneous itch, Duan said.

“Itching is one of the major symptoms in most skin disorders and other neurologic disorders,” he said. “This is one mechanism we needed to understand to develop a new treatment for patients with chronic itch.”