ANN ARBOR—In events that could exacerbate sea level rise over the coming decades, stretches of ice on the coasts of Antarctica and Greenland are at risk of rapidly cracking apart and falling into the ocean, according to new iceberg calving simulations from the University of Michigan.

“If this starts to happen and we’re right, we might be closer to the higher end of sea level rise estimates for the next 100 years,” said Jeremy Bassis, assistant professor of atmospheric, oceanic and space sciences at the U-M College of Engineering, and first author of a paper on the new model published in the current issue of Nature Geoscience.

Iceberg calving, or the formation of icebergs, occurs when ice chunks break off larger shelves or glaciers and float away, eventually melting in warmer waters. Although iceberg calving accounts for roughly half of the mass lost from ice sheets, it isn’t reflected in any models of how climate change affects the ice sheets and could lead to additional sea level rise, Bassis said.

“Fifty percent of the total mass loss from the ice sheets, we just don’t understand. We essentially haven’t been able to predict that, so events such as rapid disintegration aren’t included in those estimates,” Bassis said. “Our new model helps us understand the different parameters, and that gives us hope that we can better predict how things will change in the future.”

The researchers have found the physics at the heart of iceberg calving, and their model is the first that can simulate the different processes that occur on both ends of the Earth. It can show why in northern latitudes—where glaciers rest on solid ground—icebergs tend to form in relatively small, vertical slivers that rotate onto their sides as they dislodge. It can also illustrate why in the southernmost places—where vast ice shelves float in the Antarctic Ocean—icebergs form in larger, more horizontal plank shapes.

The model treats ice sheets—both floating shelves and grounded glaciers—like loosely cemented collections of boulders. Such a description reflects how scientists in the field have described what iceberg calving actually looks like. The model allows those loose bonds to break when the boulders are pulled apart or rub against one another.

The simulations showed that calving is a two-step process driven primarily by the thickness of the ice.

“Essentially, everything is driven by gravity,” Bassis said. “We identified a critical threshold of one kilometer where it seems like everything should break up. You can think of it in terms of a kid building a tower. The taller the tower is, the more unstable it gets.”

Icebergs do have a tendency to form before that threshold though, Bassis suspects, due to cracks that are already there—either formed when capsizing bergs crash into the water and send shockwaves through the surrounding ice, or when melted water on the surface cuts through. The former is believed to have led to the Helheim Glacier collapse in 2003. The glacier had begun to retreat slowly in 2002, but suddenly gave way the following year when the thinner ice had broken away, exposing a thicker ice coast. 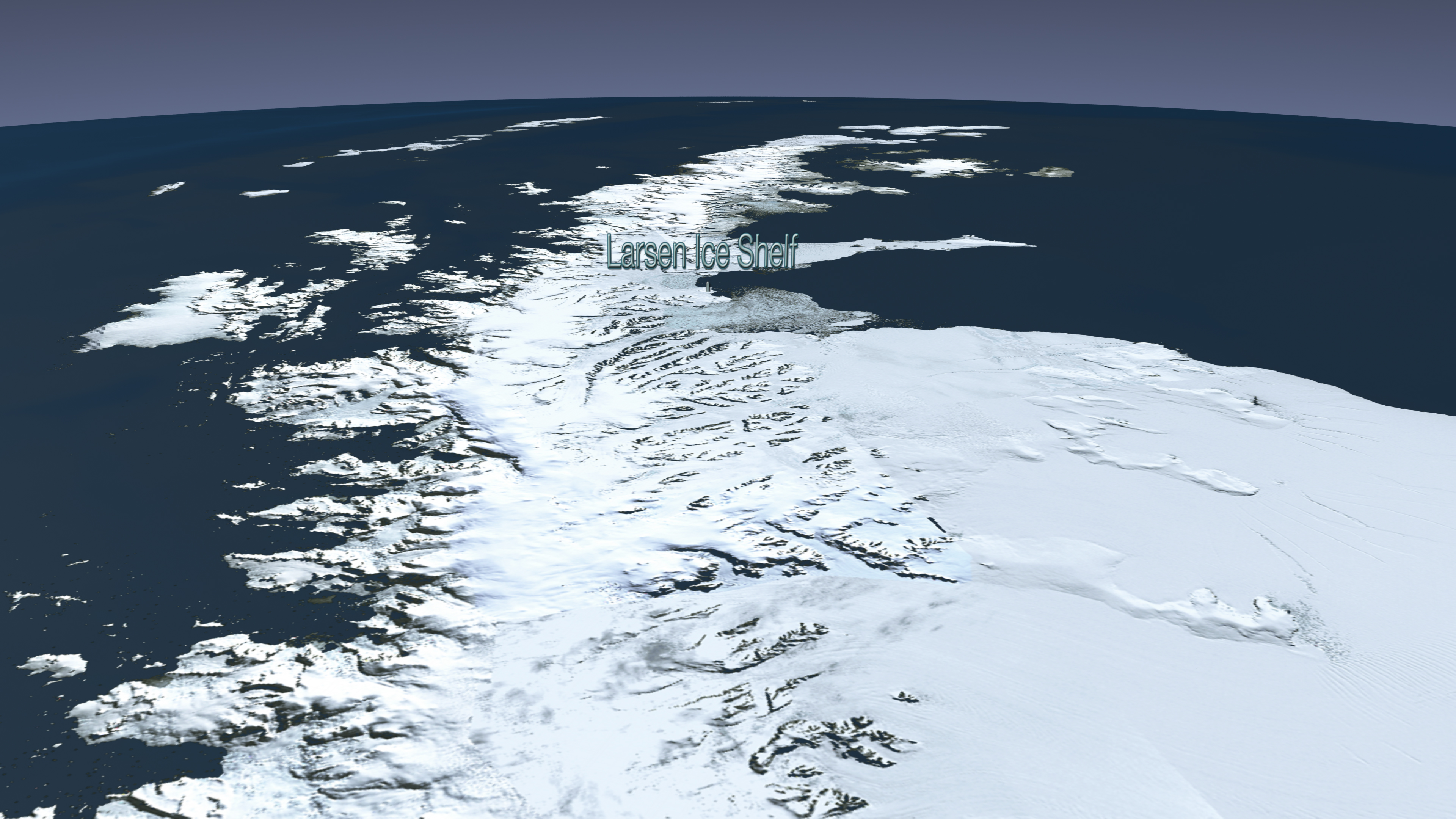 The Larsen B ice shelf began disintegrating around Jan. 31, 2002, and eventually collapsed into the Weddell Sea. University of Michigan researchers have devised a new model of iceberg calving that can mirror this event. Credit: NASAThe latter—melted water pools—are occurring more frequently due to climate change, and they’re believed to have played a role in the rapid disintegration of the Antarctica’s Larsen B ice shelf, which crumbled over about six weeks in 2002.

When the researchers added random cracks to their model, it could mirror both Helheim and Larsen B.

A third feature is also required for the most dramatic ice collapses to occur. Icebergs can’t float away and make room for more icebergs to break off the main sheet unless the system has access to open water. So areas that border deep, unobstructed ocean rather than fjords or other waterways are at greater risk of rapid ice loss. The researchers point to the Thwaites and Pine Island glaciers in Antarctica and the Jakobshavn Glacier in Greenland, which is already retreating rapidly, as places vulnerable to “catastrophic disintegration” because they have all three components.

“The ice in those places gets thicker as you go back. If our threshold is right, then if these places start to retreat as you expose the thicker calving font, they’re susceptible to catastrophic breakup,” Bassis said.

Retreat of the current ice coasts in these places areas could occur via melting or iceberg calving.

The paper is titled “Diverse calving patterns linked to glacier geometry.” The research was funded by the National Science Foundation and NASA.