Self-medication in animals much more widespread than believed 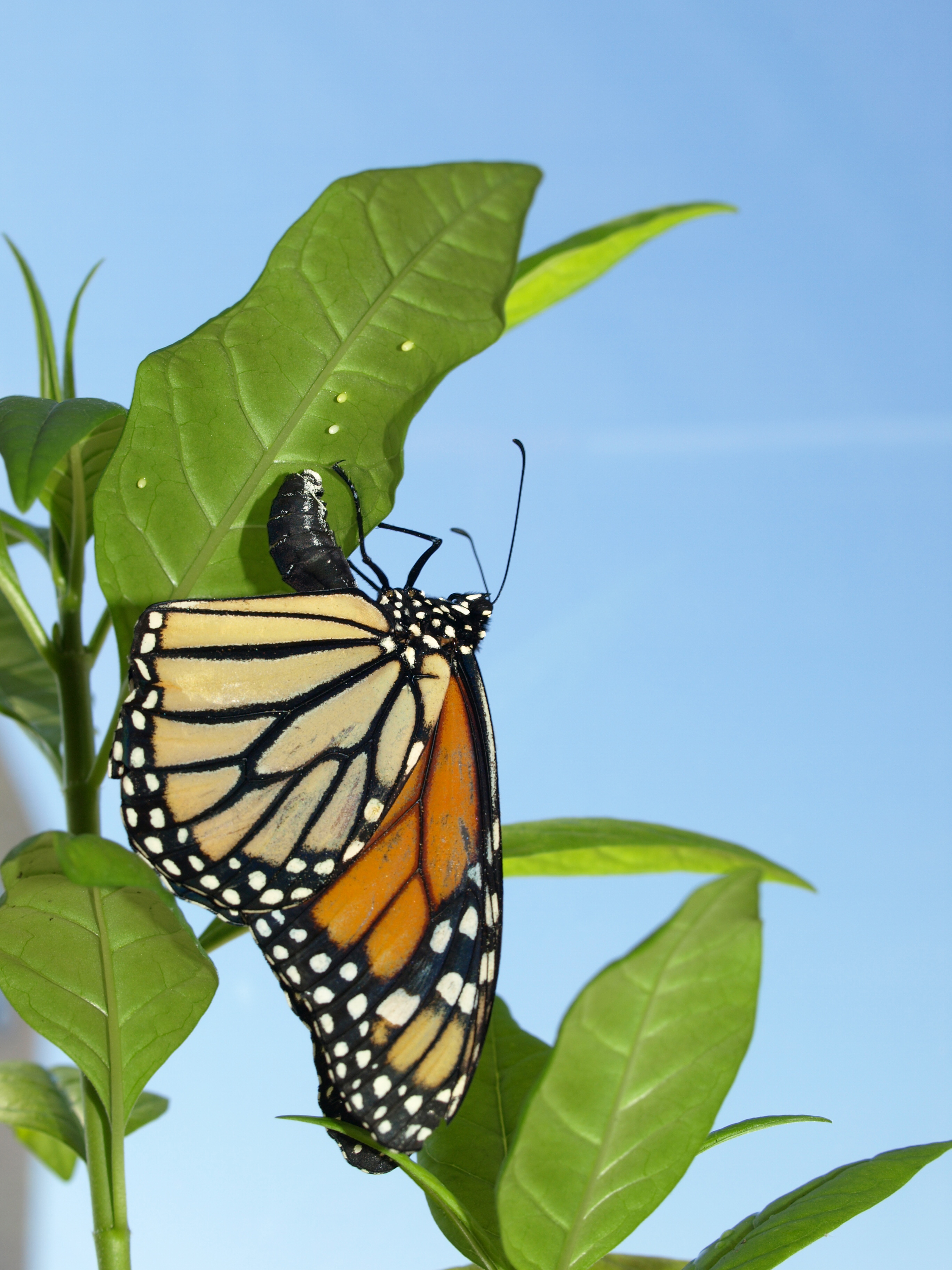 A parasite-infected monarch butterfly lays her eggs on medicinal tropical milkweed that will help to protect her offspring from disease. Image credit: Jaap de RoodeANN ARBOR—It’s been known for decades that animals such as chimpanzees seek out medicinal herbs to treat their diseases. But in recent years, the list of animal pharmacists has grown much longer, and it now appears that the practice of animal self-medication is a lot more widespread than previously thought, according to a University of Michigan ecologist and his colleagues.

Animals use medications to treat various ailments through both learned and innate behaviors. The fact that moths, ants and fruit flies are now known to self-medicate has profound implications for the ecology and evolution of animal hosts and their parasites, according to Mark Hunter, a professor in the Department of Ecology and Evolutionary Biology.

In addition, because plants remain the most promising source of future pharmaceuticals, studies of animal medication may lead the way in discovering new drugs to relieve human suffering, Hunter and two colleagues wrote in a review article titled “Self-Medication in Animals,” published online April 11 in the journal Science.

Much of the work in this field has focused on cases in which animals, such as baboons and woolly bear caterpillars, medicate themselves. One recent study has suggested that house sparrows and finches add high-nicotine cigarette butts to their nests to reduce mite infestations.

But less attention has been given to the many cases in which animals medicate their offspring or other kin, according to Hunter and his colleagues. Wood ants incorporate an antimicrobial resin from conifer trees into their nests, preventing microbial growth in the colony. Parasite-infected monarch butterflies protect their offspring against high levels of parasite growth by laying their eggs on anti-parasitic milkweed.

Hunter and his colleagues suggest that researchers in the field should “de-emphasize the ‘self’ in self-medication” and base their studies on a more inclusive framework.

“Perhaps the biggest surprise for us was that animals like fruit flies and butterflies can choose food for their offspring that minimizes the impacts of disease in the next generation,” Hunter said. “There are strong parallels with the emerging field of epigenetics in humans, where we now understand that dietary choices made by parents influence the long-term health of their children.”

The authors argue that animal medication has several major consequences on the ecology and evolution of host-parasite interactions. For one, when animal medication reduces the health of parasites, there should be observable effects on parasite transmission or virulence.

In addition, animal medication should affect the evolution of animal immune systems, according to Hunter and his colleagues. Honeybees are known to incorporate antimicrobial resins into their nests. Analysis of the honeybee genome suggests that they lack many of the immune-system genes of other insects, raising the possibility that honeybees’ use of medicine has been partly responsible—or has compensated—for a loss of other immune mechanisms.

The authors also note that the study of animal medication will have direct relevance for human food production. Disease problems in agricultural organisms can worsen when humans interfere with the ability of animals to medicate, they point out.

For example, increases in parasitism and disease in honeybees can be linked to selection by beekeepers for reduced resin deposition by their bees. A reintroduction of such behavior in managed bee colonies would likely have great benefits for disease management, the authors say.

The first author of the Science paper is Jacobus de Roode of Emory University. The other author is Thierry Lefevre of the Institut de Recherche pour le Developpement in France.