ANN ARBOR—The Alfred P. Sloan Foundation has named seven University of Michigan researchers as Sloan Research Fellows for 2017, an honor awarded to 126 early-career scientists and scholars in the United States and Canada.

The two-year, $60,000 fellowships are awarded to scientists “in recognition of distinguished performance and a unique potential to make substantial contributions to their field,” according to the organization’s website. Researchers are considered based on nominations, and then selected by an independent panel of senior scientists. 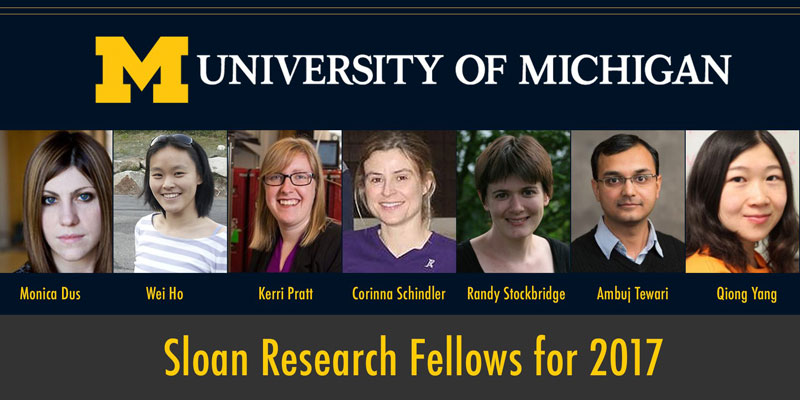 The fellows from U-M are:

“The Sloan Research Fellows are the rising stars of the academic community,” said Paul Joskow, president of the Sloan Foundation. “Through their achievements and ambition, these young scholars are transforming their fields and opening up entirely new research horizons. We are proud to support them at this crucial stage of their careers.”

Past Sloan Research Fellows include physicists Richard Feynman and Murray Gell-Mann and game theorist John Nash. Forty-three former fellows have received a Nobel Prize in their field, 17 have won the Fields Medal in mathematics, 69 have received the National Medal of Science and 16 have won the John Bates Clark Medal in economics, including every winner since 2007.

The foundation is a philanthropic, not-for-profit, grant-making institution based in New York. It was established in 1934 by Alfred Pritchard Sloan Jr., then-president and chief executive officer of General Motors.