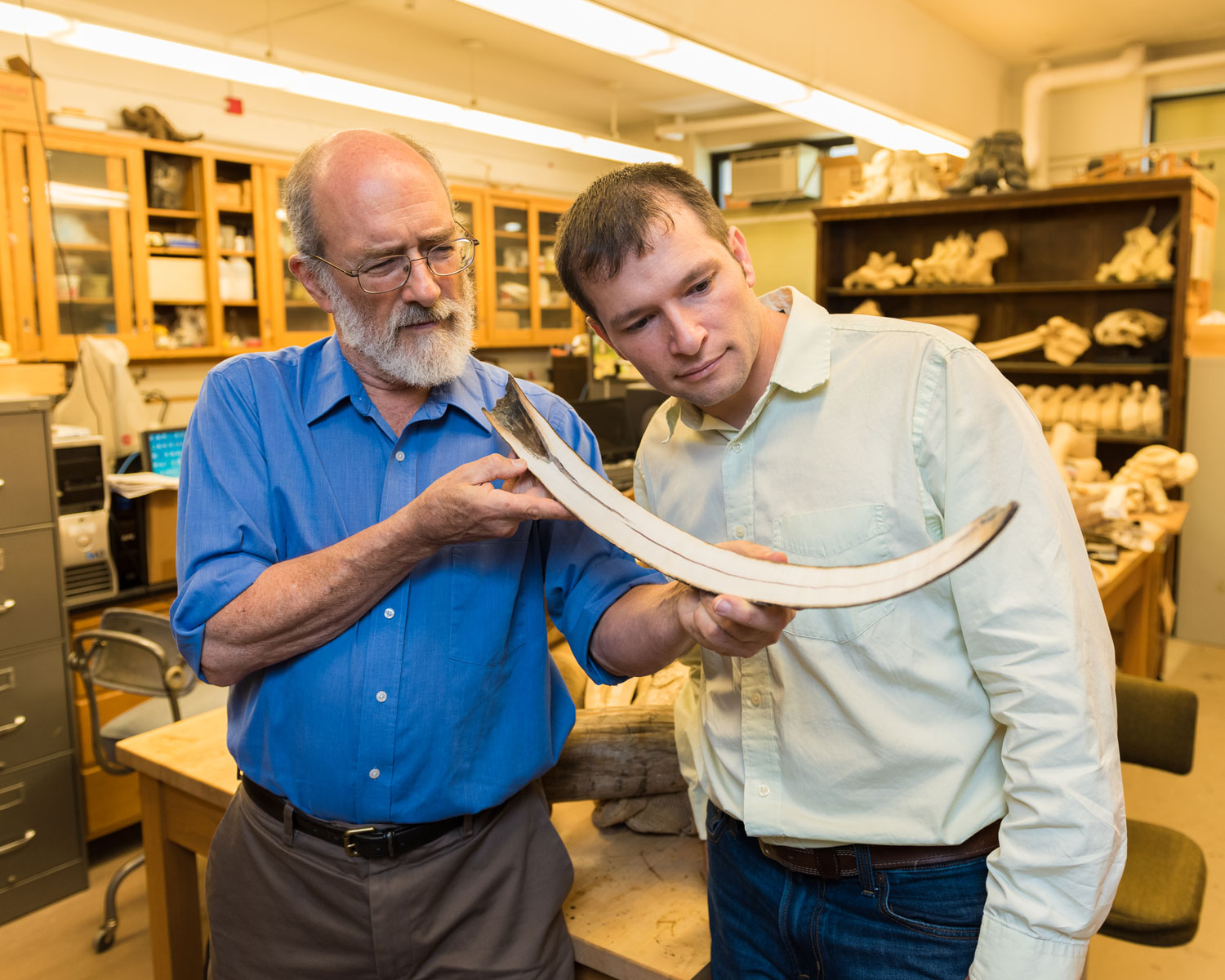 Daniel Fisher, director of the University of Michigan Museum of Paleontology, left, and Michael Cherney, a U-M doctoral student in the Department of Earth and Environmental Sciences, examine a tusk of a juvenile woolly mammoth from Siberia. The tusk was cut along its axis to expose the interior surface.ANN ARBOR—Chemical clues about weaning age embedded in the tusks of juvenile Siberian woolly mammoths suggest that hunting, rather than climate change, was the primary cause of the elephant-like animal’s extinction.

Woolly mammoths disappeared from Siberia and North America about 10,000 years ago, along with other giant mammals that went extinct at the end of the last glacial period. Current competing hypotheses for the mammoth’s extinction point to human hunting or climate change, possibly combining in a deadly one-two punch.

Despite decades of study, the issue remains unresolved and hotly debated. But two University of Michigan paleontologists may have found an ingenious way around the logjam.

U-M doctoral student Michael Cherney and his adviser, Museum of Paleontology Director Daniel Fisher, say an isotopic signature in 15 tusks from juvenile Siberian woolly mammoths suggests that the weaning age, which is the time when a calf stops nursing, decreased by about three years over a span of roughly 30,000 years leading up to the woolly mammoth’s extinction.

Climate-related nutritional stress is associated with delayed weaning in modern elephants, while hunting pressure is known to accelerate maturation in animals and would likely result in earlier weaning, according to Cherney and Fisher.

“This shift to earlier weaning age in the time leading up to woolly mammoth extinction provides compelling evidence of hunting pressure and adds to a growing body of life-history data that are inconsistent with the idea that climate changes drove the extinctions of many large ice-age mammals,” said Cherney, who is conducting the work for his doctoral dissertation in the U-M Department of Earth and Environmental Sciences. 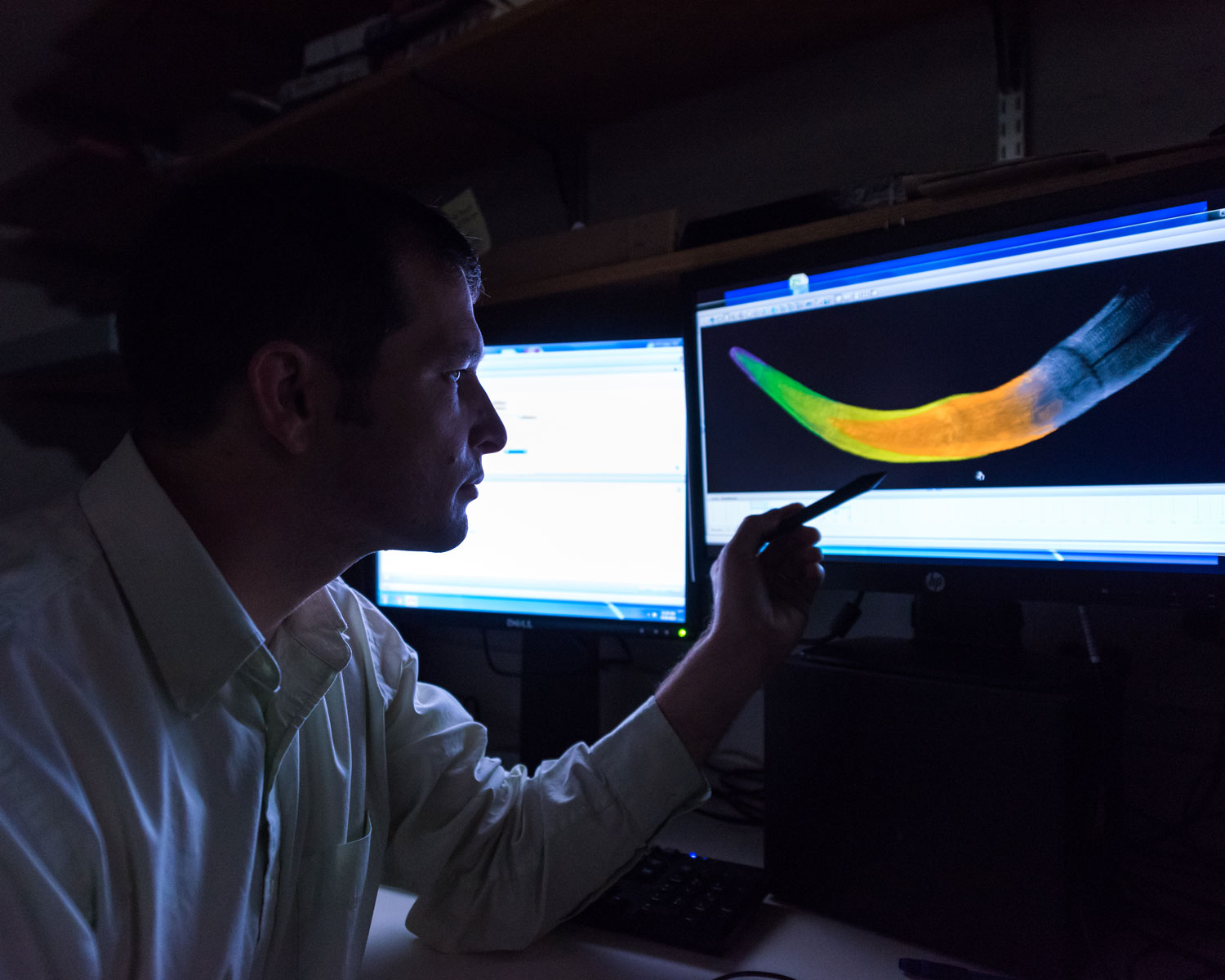 U-M doctoral student Michael Cherney views a colorized CT scan image of a juvenile woolly mammoth tusk. The various colors denote different years of growth.“These findings will not end the debate, but we hope they will show people the promise of a new approach toward solving a question that, so far, has just led to divided camps,” said Cherney, who is scheduled to present his findings Oct. 15 at a meeting of the Society of Vertebrate Paleontology in Dallas.

The study was made possible by the extensive collection of Siberian mammoth tusks that Fisher has amassed over the past 20 years. The specimens—collected and exported under permits from the Russian government with the help of colleagues in Russia, France and the Netherlands—include about three dozen juvenile tusks.

“We have known for about a decade that valuable information about weaning age could be extracted from these tusks,” said Fisher, a professor in the Department of Earth and Environmental Sciences and the Department of Ecology and Evolutionary Biology. Fisher also led the team that recovered the partial remains of a mammoth this month near Chelsea, Mich.

“But this is the first time we’ve had data from enough individuals, and covering a wide enough range of geologic ages, to show a pattern through time,” Fisher said. “This is a milestone in the development of our approach, and it shows that the extinction problem is solvable.”

As part of the study, Cherney measured the isotopic composition of tail hairs from a mother-calf pair of African elephants at the Toledo Zoo. The elephant calf was in the process of being weaned from mother’s milk, which enabled Cherney to observe the isotopic effects of nursing and the long transition to a fully solid diet for a close relative of mammoths. 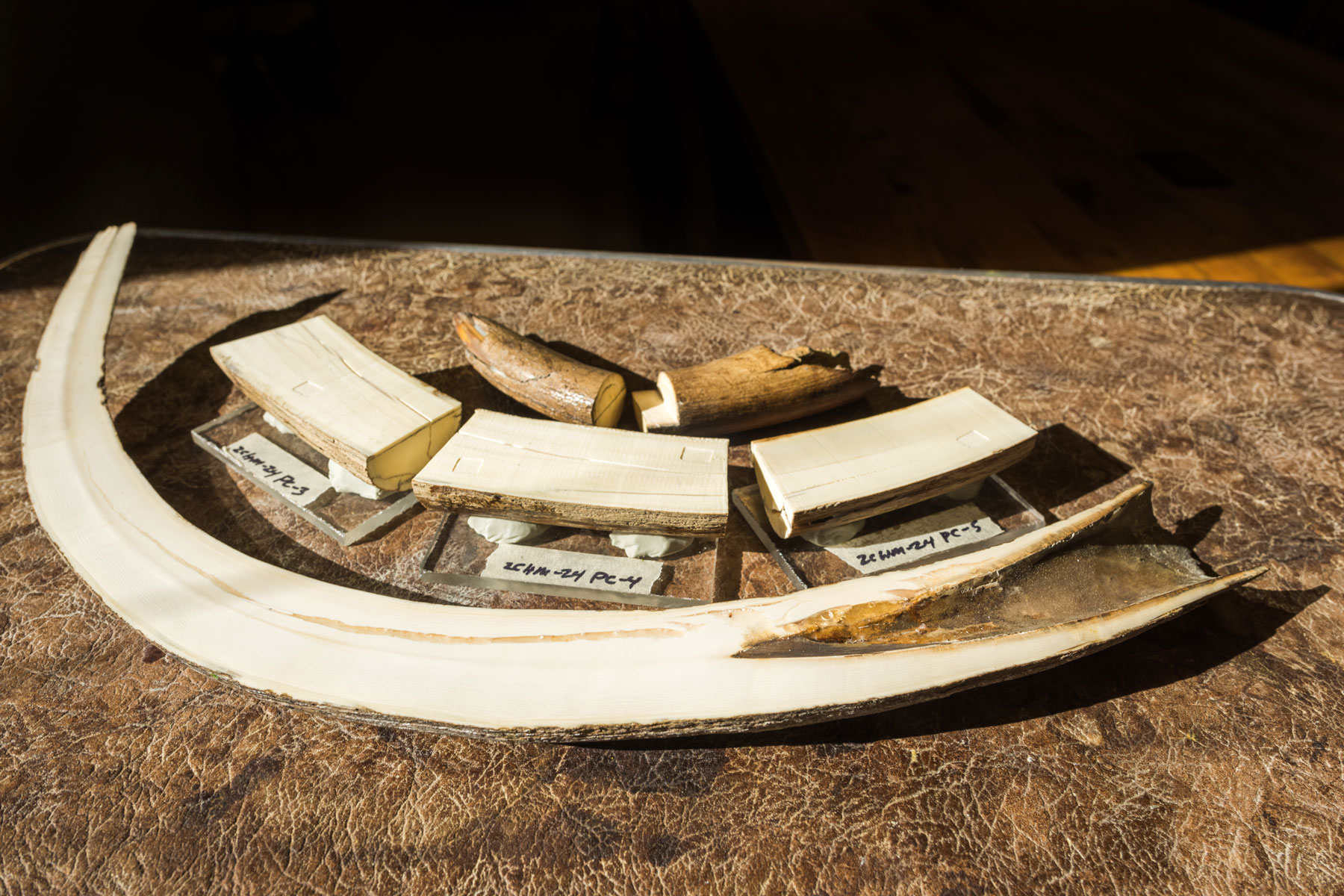 Assorted pieces of juvenile mammoth tusks used in an ongoing study of Siberian woolly mammoth weaning ages. A longitudinal cross-section, foreground, several tusk segments used for isotope sampling, and a small tusk cut in half for CT scanning, background.Cherney compared the ratio of the two stable isotopes of nitrogen, nitrogen-14 and nitrogen-15, from proteins in elephant tail hairs. He found that as the proportion of solid food in the elephant calf’s diet increased, the ratio of nitrogen-15 to nitrogen-14 steadily dropped. This pattern had been previously documented in other mammals, including humans, but never in elephants.

Armed with this isotopic weaning signature, he then turned to the mammoth tusks. CT scans enabled Cherney to identify annual growth increments—which resemble a tree’s annual growth rings—in the tusks. Samples for each year of growth were collected, and nitrogen isotopes from collagen proteins were measured.

The isotopic ratios from the calves’ early years of life consistently displayed a trend toward lower nitrogen-15 values, reflecting the decreased contribution of milk to the overall diet, Cherney said.

“It was the same pattern we saw in the Toledo Zoo elephant calf,” he said.

The gradual decrease in nitrogen-15 was followed, in most cases, by an abrupt increase that Cherney and Fisher interpret as a sign of short-term nutritional stress during the first year after being fully weaned.

Cherney and Fisher showed that over the span of 30,000 years, the average weaning age decreased from age 8 to age 5.

The current weaning study is part of a much larger, decades-long effort by Fisher and a series of graduate students to extract “life history” information preserved in fossil tusks. Biologists use the term life history to refer to the full range of changes an organism experiences in the course of its growth and development.

“I started studying tusks 30 years ago and realized early on that life histories are the key,” Fisher said. “Nobody else has used tusks, which are after all a record of life and growth, as a source of data in this way.”

Over the years, Fisher and his students have shown that mammoth tusks hold life-history information about growth rates, age of sexual maturation, spacing of pregnancies, and weaning.

Because the timing of those life-history milestones can be affected by various environmental pressures, the tusks provide a way to “look directly at how the animals themselves were impacted by, and responded to, changes in their environment,” Cherney said.

Often, environmental changes have predictable effects on life histories. By analyzing evidence from mammoth tusks, Fisher and his students can test those predictions.

“The strength of life-history analyses for resolving the extinction debate rests in the knowledge that the age of final weaning is a life-history landmark that is expected to change differently in response to predation and climate-related nutritional stress,” said Cherney, who will speak during the Romer Prize Session at the paleontology meeting. “Our analysis sets up a test of competing hypotheses, and our preliminary results are consistent with expectations under hunting pressure.”

The work was funded in part by grants from the National Science Foundation, the National Geographic Society and CRDF Global. Cherney and Fisher plan to submit their findings for publication in a scientific journal.