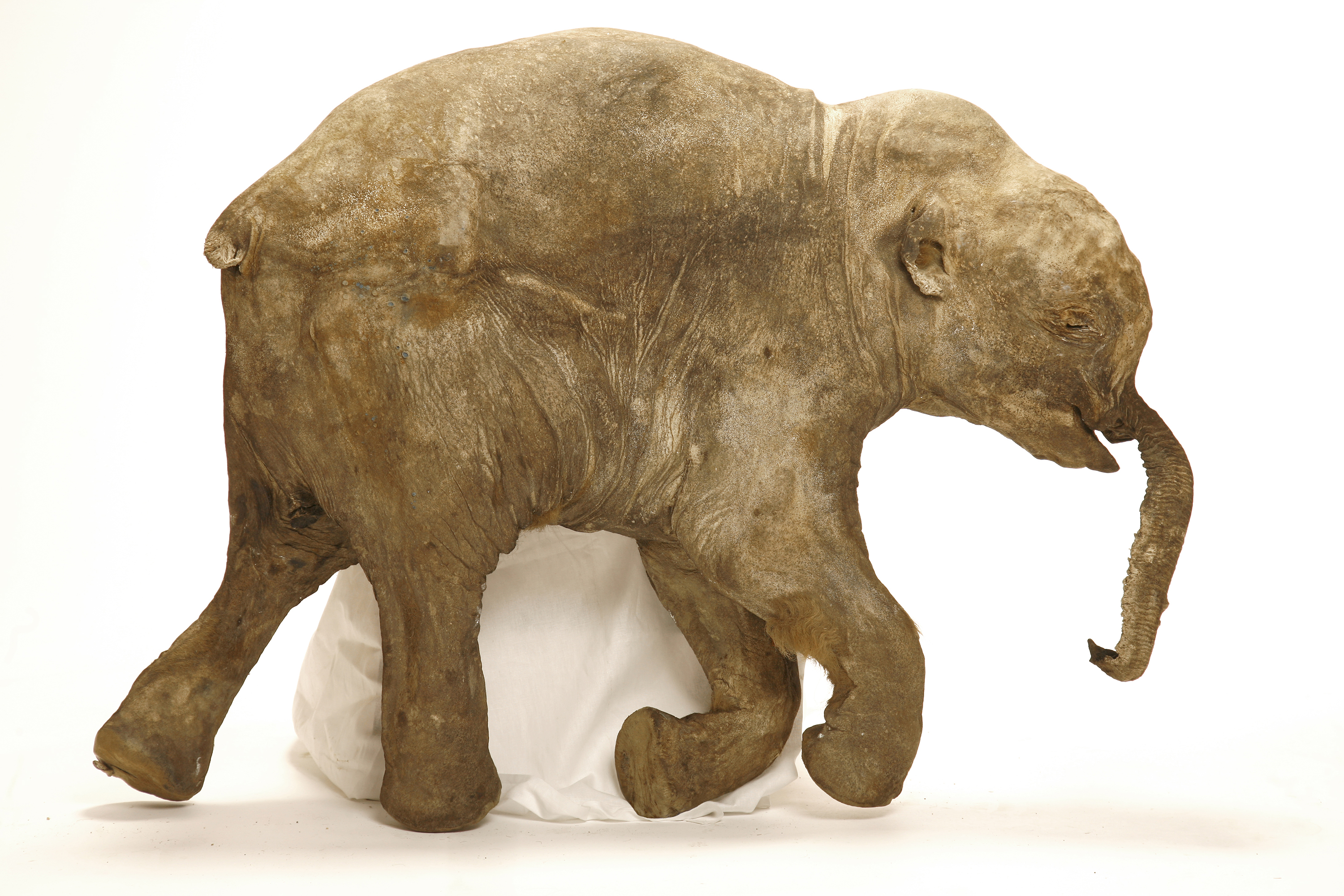 A photograph of Lyuba’s external appearance prior to any internal examination. Image credit: Francis Latreille

CT scans of two newborn woolly mammoths recovered from the Siberian Arctic are revealing previously inaccessible details about the early development of prehistoric pachyderms. In addition, the X-ray images show that both creatures died from suffocation after inhaling mud.

Lyuba and Khroma, who died at ages 1 and 2 months, respectively, are the most complete and best-preserved baby mammoth specimens ever found. Lyuba’s full-body CT scan, which used an industrial scanner at a Ford testing facility in Michigan, was the first of its kind for any mammoth. 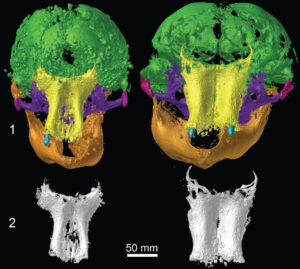 CT images showing a side-by-side comparison of skulls from Lyuba (left) and Khroma, with bones of the front of the skull shown below. Image credit: University of Michigan Museum of Paleontology.

“This is the first time anyone’s been able to do a comparative study of the skeletal development of two baby mammoths of known age,” said University of Michigan paleontologist Daniel Fisher.

“This allowed us to document the changes that occur as the mammoth body develops,” Fisher said. “And since they are both essentially complete skeletons, they can be thought of as Rosetta Stones that will help us interpret all the isolated baby mammoth bones that show up at other localities.”

Fisher, director of the U-M Museum of Paleontology, is lead author of a paper scheduled for online publication July 8 in a special issue of the Journal of Paleontology. The paper provides a detailed discussion of the findings from the Lyuba and Khroma CT scans and includes about 30 previously unpublished CT images.

The paper’s 10 authors are from the United States, Russia and France. They include three recent U-M graduates and a collections manager at the U-M paleontology museum.

Lyuba and Khroma lived more than 40,000 years ago and belonged to mammoth populations separated by roughly 3,000 miles. Lyuba was found by reindeer herders in May 2007 on the banks of the Yuribei River on the Yamal Peninsula, in northwest Siberia. She was found frozen and partially dehydrated but otherwise appeared to be intact, except for the loss of most of her hair and all of her nails.

Khroma was found in October 2008 near the Khroma River in northernmost Yakutia, in northeast Siberia. She was frozen in permafrost in an upright position. Ravens and possibly arctic foxes scavenged exposed portions of her carcass, including parts of the trunk and skull and the fat hump that likely covered the back of her neck. Otherwise, the body was recovered in good condition.

Because of the remarkable preservation of Lyuba and Khroma, stringent conditions were placed on their study. Some dissection and limited sampling were allowed, but both specimens were left mostly intact. CT scans offered a non-destructive means of visualizing and analyzing much of their anatomy without compromising exhibit potential or options for future analysis.

CT scans of Lyuba were done in Tokyo in 2009 and in Wisconsin in 2010, using medical scanners. But because of Lyuba’s size (about 110 pounds and slightly smaller than a baby elephant), the researchers could not acquire 3-D data from her entire body. They finally succeeded in October 2010 at Ford Motor Co.’s Nondestructive Evaluation Laboratory in Livonia, Mich., using a scanner designed for finding flaws in vehicle transmissions.

Khroma’s CT scans were done at two French hospitals. Micro-CT scans of teeth from both mammoth calves were conducted at the University of Michigan School of Dentistry. From the dental studies, Fisher and colleagues determined that Lyuba died 30 to 35 days after birth and estimated that Khroma’s age at death was between 52 and 57 days.

Dating technique more than 30 years in the making

The researchers used a technique developed by Fisher over the past 30-plus years that involves counting daily growth layers inside the teeth, a bit like counting the annual growth rings on a tree to determine its age. The dental studies also indicate that both mammoths were born in the spring.

Scans of Khroma’s skull showed she had a brain slightly smaller than that of a newborn elephant, which hints at the possibility of a shorter gestation period for mammoths.

Lyuba’s skull is conspicuously narrower than Khroma’s, and her upper jawbones are more slender, while Khroma’s shoulder blades and foot bones are more developed. These differences may simply reflect the one-month age difference between the calves, or they could relate to the different populations from which the two calves derived.

The researchers refer to both calves as mummies due to the high level of soft-tissue preservation. In addition to fully articulated skeletons, the carcasses held preserved muscle, fat, connective tissue, organs and skin. Khroma even had clotted blood inside intact blood vessels and undigested milk in the stomach.

“These two exquisitely preserved baby mammoths are like two snapshots in time. We can use them to understand how factors like location and age influenced the way mammoths grew into the huge adults that captivate us today,” said co-author Zachary T. Calamari of the American Museum of Natural History, who began investigating mammoths as a U-M undergraduate working with Fisher.

Description: Macintosh HD:Users:Alex:Documents:Mammoths Press_files:image011.gifIn addition to providing unprecedented insights into mammoth development, the CT scans of Lyuba and Khroma show that both youngsters died after inhaling mud, then suffocating, according to the authors of the Journal of Paleontology paper. This death scenario was suggested for Lyuba shortly after she was first examined. The Khroma CT scans demonstrate that she suffered a similar fate. 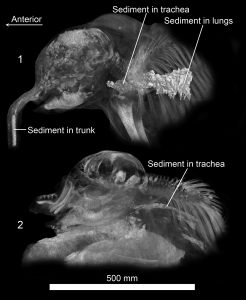 In Lyuba, the scans revealed a solid mass of fine-grained sediment blocking the air passages in the middle of the trunk. Sediment was also seen in Lyuba’s throat and bronchial passages. If Lyuba had died by drowning rather than suffocation – as some have suggested – then traces of sediment should also have been detected in parts of the lungs beyond the bronchial passages, but that was not the case.

Slightly coarser sediment was found in Khroma’s trunk, mouth and throat. Her lungs weren’t available for study because they were scavenged before the carcass was recovered. Since both animals appear to have been healthy at the time of death, a “traumatic demise” involving the inhalation of mud and suffocation appears to be the most likely cause of death in both cases, according to the authors.

The researchers suspect that Lyuba died in a lake because sediments found in her respiratory tract include fine-grained vivianite, a deep blue iron- and phosphate-bearing mineral that commonly forms in cold, oxygen-poor settings such as lake bottoms.

It’s possible that Lyuba crashed through the ice while crossing a lake during the spring melt. If she was struggling to breathe while submerged in a frigid lake, the mammalian “diving reflex” may have kicked in during her final moments, Fisher said. The reflex is triggered by cold water contacting the face, and it initiates physiological changes that enable animals to stay underwater for extended periods of time.

Those changes include a shifting of blood from the extremities to the body’s core, including the brain and heart. The blood shift would help explain small vivianite nodules found on Lyuba’s facial tissues during a necropsy. The CT scans revealed vivianite nodules, up to several millimeters in length, on the surface of the skull and inside it.

Blood coursing into Lyuba’s brain, due to the mammalian diving reflex, may have provided the iron source for the vivianite nodules, according to the authors. Lactic acid-producing bacteria ate away at her bones after death, possibly liberating the phosphate ions used to make vivianite, Fisher said.

A possible death scenario for Khroma places the calf and her mother on a riverbank in the spring. Khroma had been nursing less than an hour before her death, as evidenced by undigested milk found in her stomach during a necropsy by a team of scientists that included Fisher.

“It looked like you’d just popped the top on a container of yogurt,” Fisher recalled. “It was that white. It was that smooth. Just fresh, creamy milk from mama mammoth.”

Perhaps the riverbank collapsed and the two mammoths, mother and daughter, plunged into the river. A fall would account for the fractured spinal column revealed by Khroma’s CT scan, as well as the mud she inhaled.

The CT scan paper is part of a special Journal of Paleontology issue on three-dimensional visualization and analysis of fossils. In addition to Fisher and Calamari, the paper’s authors are Ethan A. Shirley, Christopher D. Whalen and Adam Rountrey of the U-M Museum of Paleontology; Alexei N. Tikhonov of the Russian Academy of Sciences; Bernard Buigues of the International Mammoth Committee in France; Frederic Lacombat of the Musee de Paleontologie de Chilhac in France; and Semyon Grigoriev and Piotr A. Lazarev of the North-Eastern Federal University in Russia.

Fisher is the Claude W. Hibbard Collegiate Professor of Paleontology, a professor in the Department of Earth and Environmental Sciences, and a professor in the Department of Ecology and Evolutionary Biology. Calamari, Shirley and Whalen are recent U-M graduates and spent a month in Siberia with Fisher in 2012, searching for mammoth remains. Rountrey is the collections manager for vertebrates at the U-M Museum of Paleontology.

The research was supported by the U.S. National Science Foundation and by the National Geographic Society.