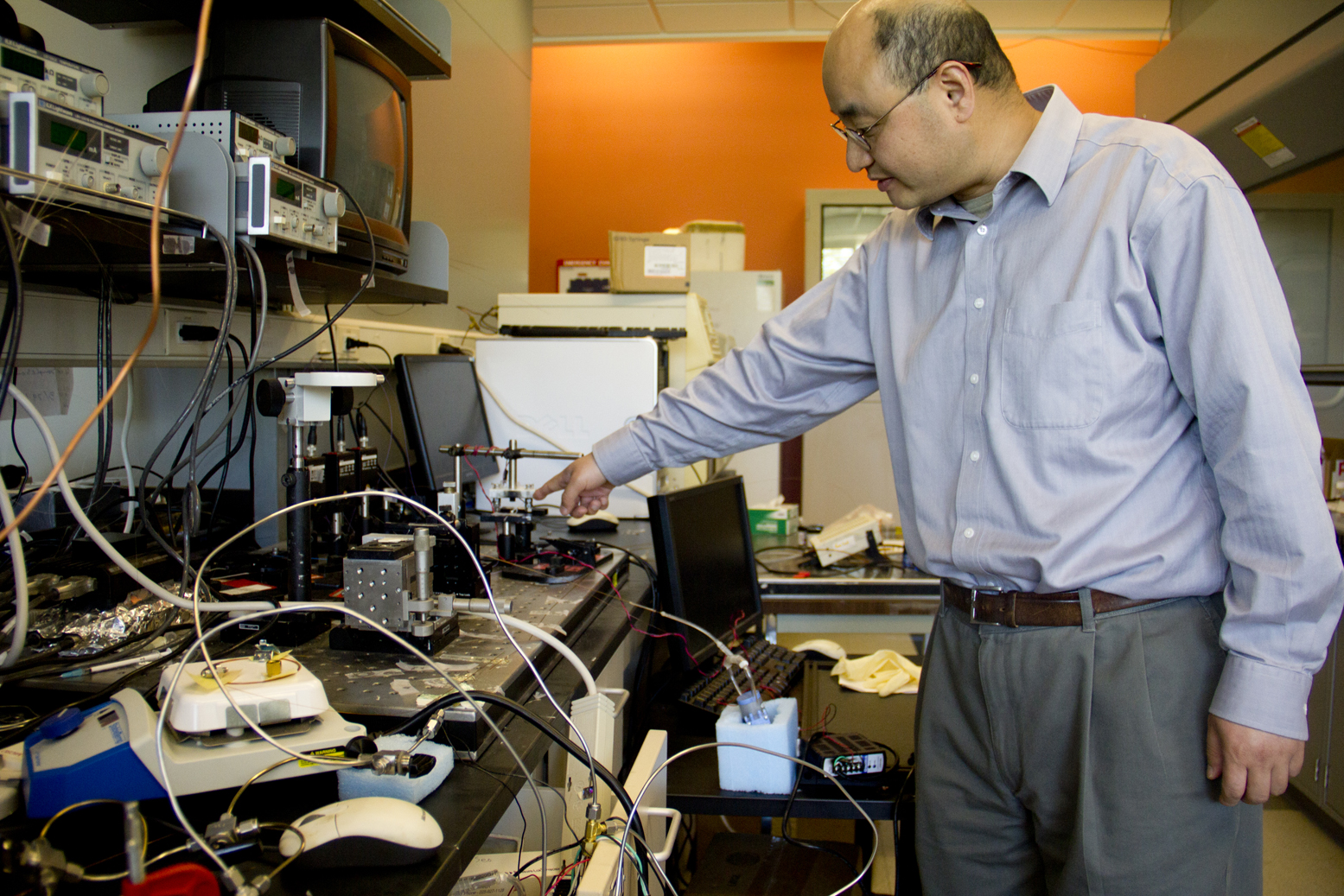 Xudong Fan, an associate professor of biomedical engineering, points to the compressor that is part of the smart, portable gas sensor that he is developing. The device could one day be used to detect chemical weapon vapors or indicators of disease more precisely than current models do. It also consumes less power, which is crucial for stretching battery life in a mineshaft or an isolated clinic. Image credit: Joseph Xu, College of EngineeringANN ARBOR— Portable gas sensors can allow you to search for explosives, diagnose medical conditions through a patient’s breath, and decide whether it’s safe to stay in a mine.

These devices do all this by identifying and measuring airborne chemicals, and a new, more sensitive, smart model is under development at the University of Michigan. The smart sensor could detect chemical weapon vapors or indicators of disease better than the current design. It also consumes less power, crucial for stretching battery life down a mineshaft or in isolated clinics.

In the gold standard method of gas detection, chemicals are separated before they are measured, said Xudong “Sherman” Fan, a professor in the Department of Biomedical Engineering.

“In a vapor mixture, it’s very difficult to tell chemicals apart,” he said.

The main advance of the sensor under development by Fan and his colleagues at U-M and the University of Missouri, Columbia, is a better approach to divvying up the chemicals. The researchers have demonstrated their concept on a table-top set-up, and they hope to produce a hand-held device in the future.

You can think of the different chemical vapors as tiny clouds, all overlapping in the original gas. In most gas sensors today, researchers separate the chemicals into smaller clouds by sending the gas through two tubes in sequence. A polymer coating on the inside of the first tube slows down heavier molecules, roughly separating the chemicals according to weight. The time it takes to get through the tube is the first clue to a chemical’s identity, Fan explained.

A pump and compressor collect gas from the first tube and then send it into the second tube at regular intervals. The second tube is typically coated with polar polymers, which are positively charged at one end and negatively charged at the other. This coating slows down polar gas molecules, allowing the non-polar molecules to pass through more quickly. With this second clue, the researchers can identify the chemicals in the gas.

The decision-maker added by Fan’s group consists of a detector and computer that watch for the beginnings and ends of partially separated chemical clouds. Under its direction, the compressor only runs when there is a complete cloud to send through. In addition to consuming one-tenth to one-hundredth of the energy expended by the compressor in typical systems, this approach makes data analysis easier by keeping all molecules of one type together, said Jing Liu, a graduate student in Fan’s group.

“It can save a lot of power, so our system can be used in remote areas,” she said.

Because no gas can enter the second tube until the previous chunk has gone all the way through, the smart system takes up to twice as long to fully analyze the gas. However, adding alternative tubes for the second leg of the journey can get the system up to speed. Then, the decision-maker acts like a telephone operator.

“It can tell if one tube is ‘busy’ and send the gas to another line,” Fan said.

This way, the device never stops the flow of the gas from the first tube. These second tubes can be customized for separating specific gasses, made to various lengths and with different coatings. As an example, Fan suggested that a dedicated tube for sensing specific molecules could serve as a “hotline.”

“If we have suspicion that there are chemical weapon vapors, then we send that particular batch of molecules to this hotline,” said Fan. “It could identify them with really high sensitivity.”

Fan’s team will study these sophisticated setups in the future. For now, they have proven that their decision-maker can distribute gas between two secondary tubes. Their smart sensors fully identified gasses containing up to 20 different chemicals, as well as compounds emitted by plants.

The paper is titled “Adaptive two-dimensional micro-gas chromatography” and it appears in today’s issue of the journal Analytical Chemistry. This work was supported by the National Science Foundation (IOS 0946735) and the Center for Wireless Integrated Microsensing and Systems at the University of Michigan.