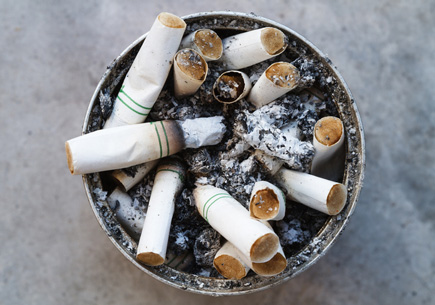 They also die 10 years earlier than those with serious mental illness who have never smoked.

This means smoking may account for nearly two thirds of the overall difference in life expectancy between individuals with serious mental illness who smoke, and never smokers in the general population, says Jamie Tam, a doctoral candidate in the Department of Health Management and Policy at the U-M School of Public Health, who conducted the study.

“Smoking reduces life expectancy for everyone but we tend to underestimate the importance of smoking for people with comorbidities,” Tam said. “We know from existing research that people with mental illness live shorter lives, but what wasn’t known is how much of that is due to their mental illness and how much is due to the fact that many of them are smokers.”

About 42 percent of people with serious psychological distress are smokers, compared with the general population at less than 20 percent.

To find out the contribution of smoking to reduced life expectancy among people with serious psychological distress, Tam and School of Public Health faculty members Kenneth Warner and Rafael Meza analyzed data from 328,000 individuals 25 years and older from the National Health Interview Survey gathered from 1997-2009. They linked it with the 2011 National Death Index.

Tam said a disproportionate number of those with serious mental illnesses—including bipolar disorder, schizophrenia and major depression—live in poverty, as they are often unemployed and many face homelessness and social conditions that increase their likelihood of smoking and in turn their risk of other health conditions.

Deaths by suicide and accidents also occur more frequently in this population.

Among those with serious psychological distress, the researchers found that 47 percent of the deaths are due to the three leading health complications associated with smoking: heart disease, cancer and stroke.

“This highlights the need to prioritize preventive care, including smoking cessation programs, for people with mental illness,” said Meza, senior author of the study and assistant professor of epidemiology at the U-M School of Public Health.

“A large majority of people with mental illness don’t access mental health care, and even when they do, other health concerns like smoking are not addressed,” she said. “There have been calls to integrate smoking interventions into mental health care but these recommendations haven’t been fully implemented.”

Their study appears in the American Journal of Preventive Medicine.